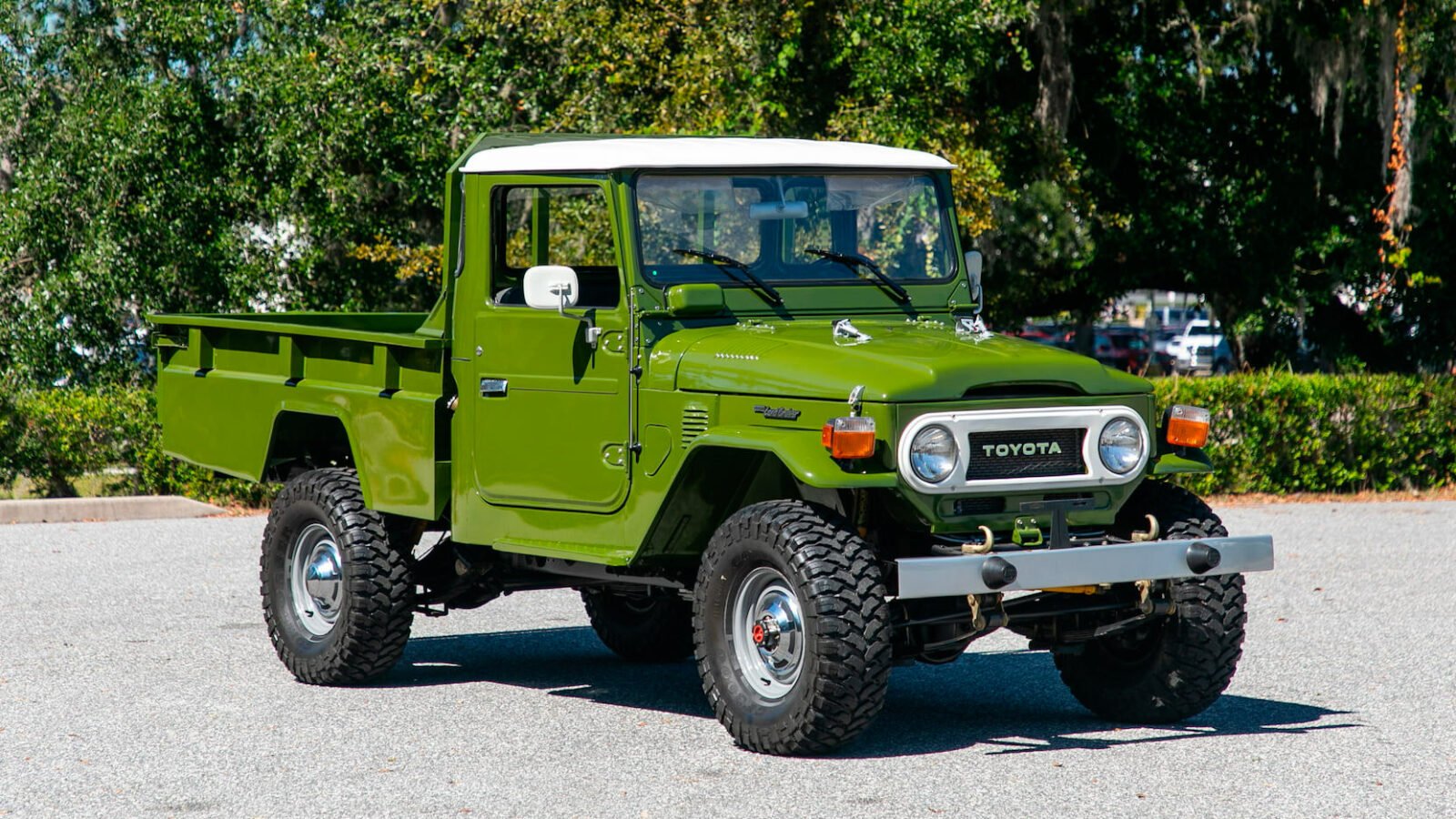 This is a restored 1976 Toyota Land Cruiser FJ45 pickup truck that has been given a few subtle improvements, like upgraded suspension, air-conditioning, disc brakes, and power steering – but the correct nature of the vehicle remains well and truly intact.

When it comes to bulletproof reliability, there are few vehicles more highly respected than the Land Cruiser, particularly the early vehicles from the era before ECUs, independent suspension, and onboard computer systems.

Where Did The Name Land Cruiser Come From?

The Land Cruiser name bears more than a passing resemblance to the name given by the Rover company to their new four-wheel drive vehicle in the late 1940s – Land Rover. 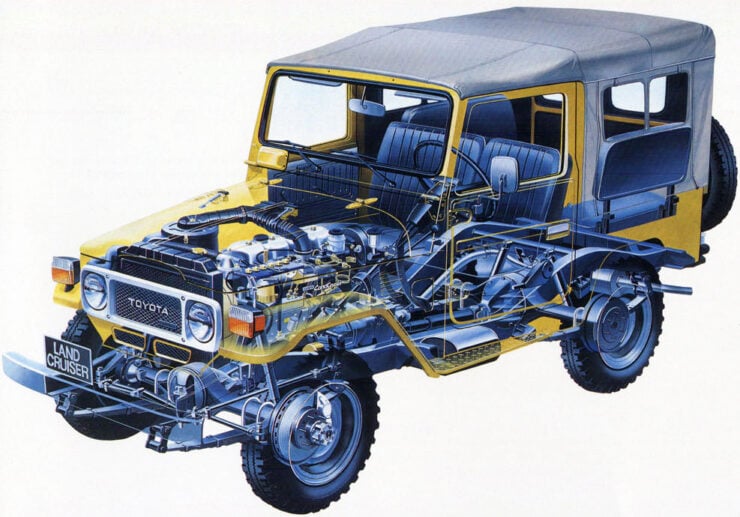 This cutaway illustration offers a look under the skin of the FJ40 Land Cruiser, showing the chassis, axles, suspension and drivetrain.

As it happens this similarity is no accident, the name Land Cruiser was coined by Toyota technical director Hanji Umehara.

In a later interview Umehara said “In England we had another competitor – Land Rover. I had to come up with a name for our car that would not sound less dignified than those of our competitors. That is why I decided to call it “Land Cruiser.”

The name stuck and it’s been used on every generation of the vehicle since 1954.

The FJ45 version of the J40 Land Cruiser was the gasoline-fueled longer wheelbase model, it was sold alongside the BJ45 in many world markets which was the diesel-fueled model.

Though the FJ40 will likely always be the most famous of the J40s, no one car argue that the long wheelbase FJ45 and the even longer wheelbase FJ47 were more practical. They could be ordered in a number of body styles including five-door or two-door station wagons, and the model you see here, the pickup truck variant.

The FJ45 shared the same fundamental platform as the other vehicles in the J40 series consisting of a steel ladder chassis, live axles on leaf springs front and back, drum brakes all around (until 1976), and a front-mounted engine sending power back through a manual transmission and a two-speed transfer case. 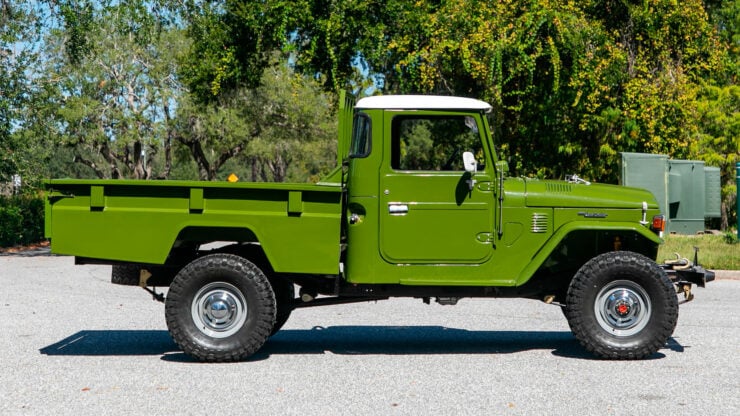 The FJ45 is a longer wheelbase version of the J40 series Land Cruiser. It was offered in a number of body styles including pickup truck (shown here), five door people carrier, and two-door station wagon.

The engines varied depending on year and variant, the gasoline-powered vehicles started out with the 3.9 liter inline-six cylinder overhead valve Toyota F engine producing up to 128 bhp. This engine was used from 1960 until 1975.

After 1975 it was replaced with the Toyota 2F engine, a closely related inline-six with a displacement of 4.2 liters producing up to 133 bhp, which remained in production from 1975 until 1984.

The truck you see here is an FJ45 Pickup from 1976. It now benefits from a full frame-off restoration. It maintains its original matching-number 4.2 liter engine and 4-speed transmission, both rebuilt during the restoration.

Though always a capable workhorse, this FJ45 has seen a number of well considered improvements to make it easier to drive regularly in modern traffic. It now has upgraded suspension throughout as well as disc brakes that notably improve stopping power.

Inside the cabin you’ll find a bench seat that can accommodate three, air conditioning (including both chill and heat functions), and power steering.

It’s now due to roll across the auction block with Mecum in January. If you’d like to read more about it or register to bid you can visit the listing here. 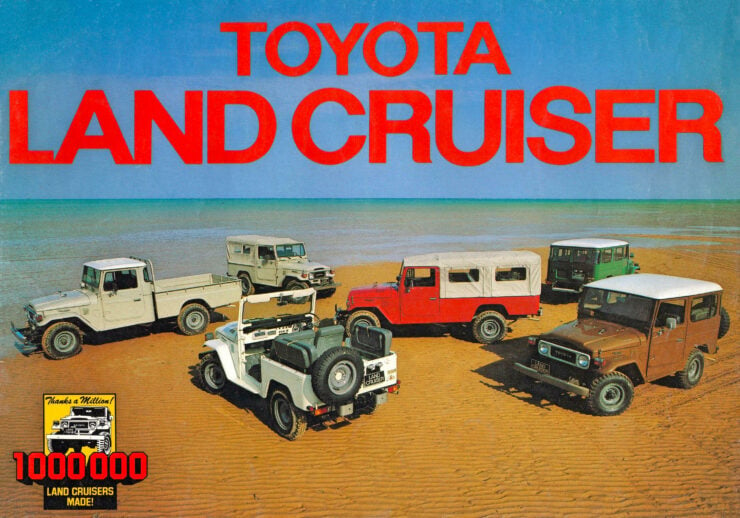 This image was taken for a Toyota advertisement to celebrate the millionth Land Cruiser. It also showcases the many different body styles that were in production for the J40 series. 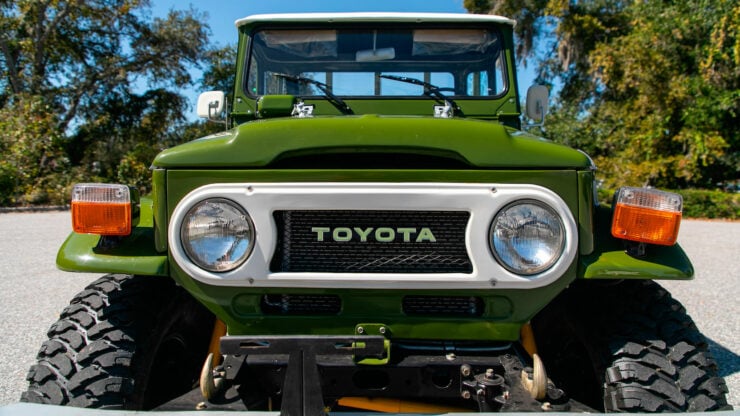 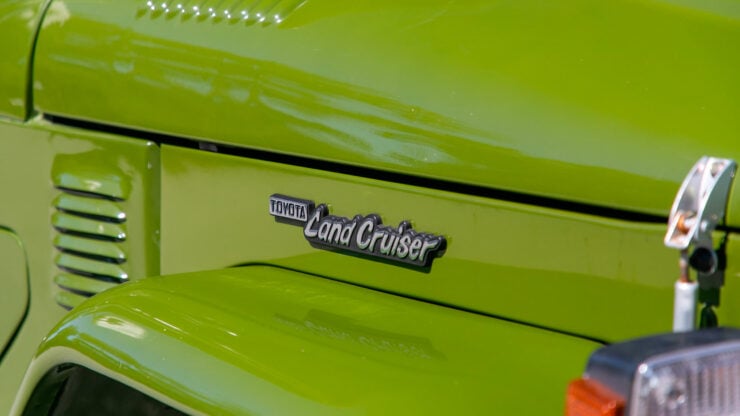 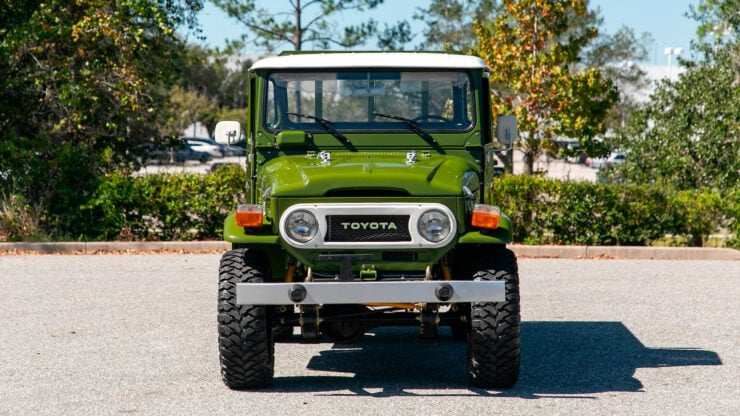 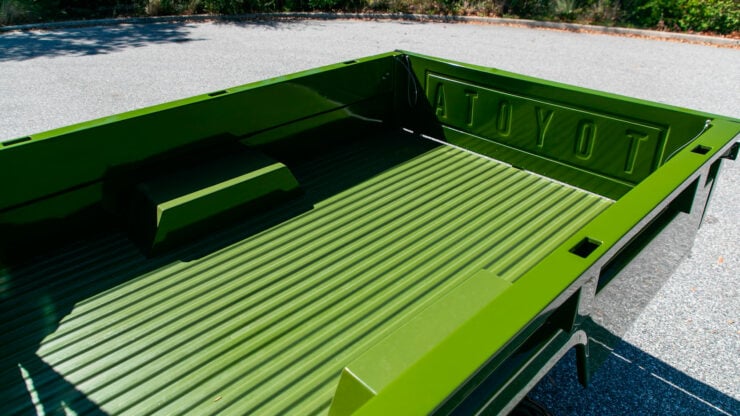 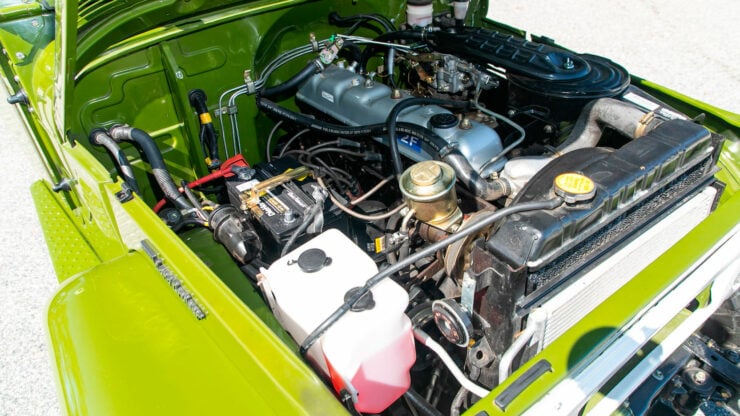 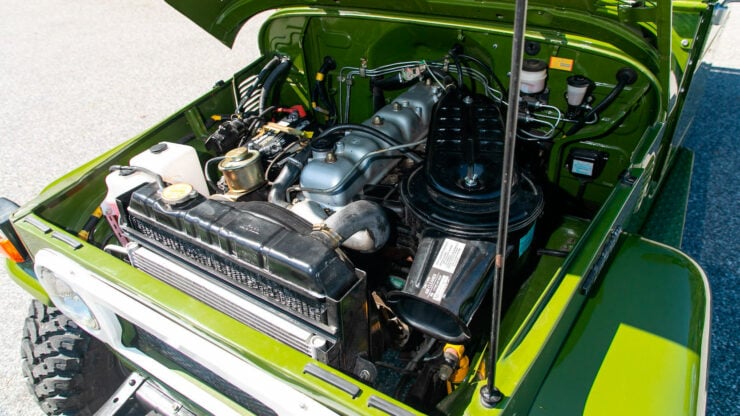 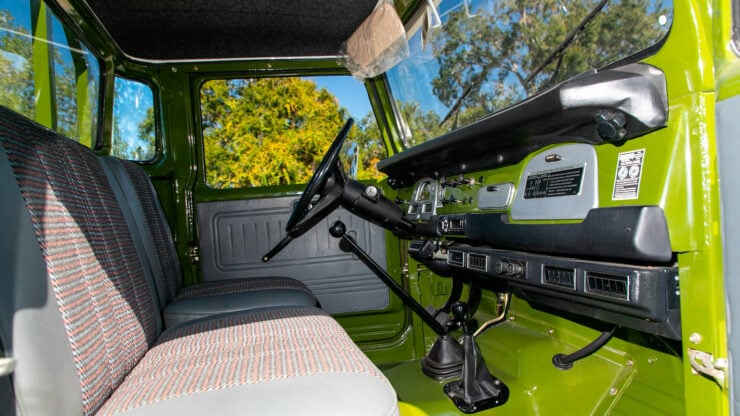 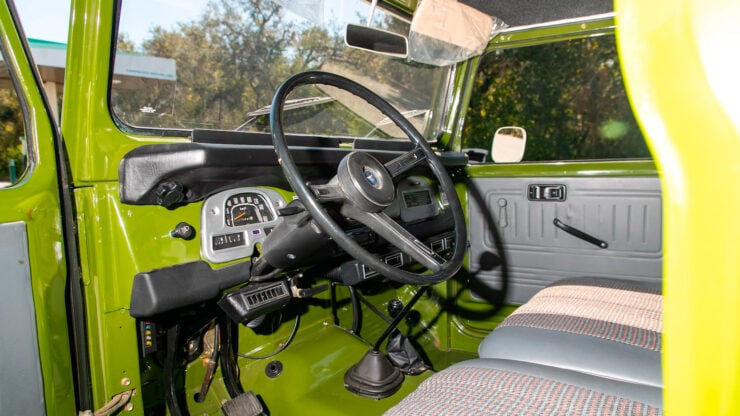 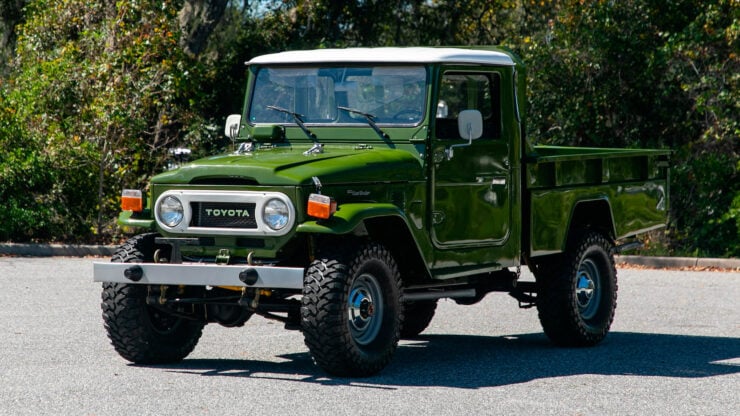 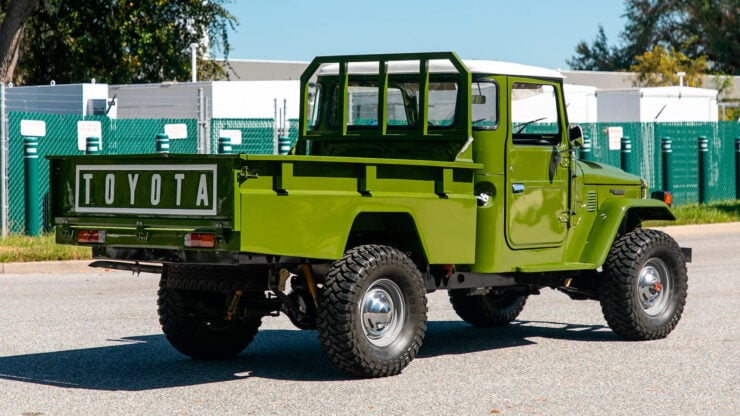