This is the new Switch eScrambler, it’s a new electric motorcycle from New Zealand that claims to be the first production electric scrambler in the world.

Switch Motorcycles is based in New Zealand, a country famous for its ability to produce mavericks, particularly in the motorcycle world. 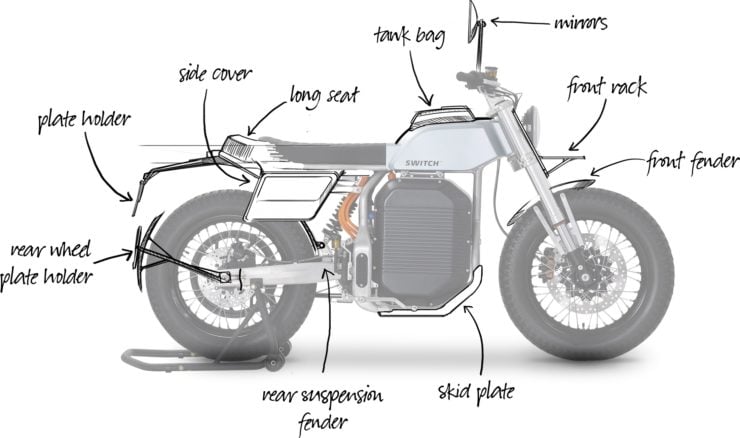 A series of additional parts will be made available, including obvious items needed for street legality like license plate holders, rear vision mirrors, and larger fenders.

New Zealand has been home to Burt Munro “The World’s Fastest Indian,” John Britten – the designer of the Britten V1000 superbike, and Ivan Mauger who is arguably the greatest speedway motorcycle racer in history.

Matthew Waddick, the founder of Switch Motorcycles, is a likely candidate to get added to that list of prominent New Zealand motorcycle personalities.

Waddick released the first prototype of the eScrambler back before the pandemic, in the two years since he’s worked with ex-Yamaha Japan Advanced Labs and former speedway champion Michel Riis Eriksen to productionize the design.

The company is based in New Zealand which is where the motorcycles are built, parts are sourced from a global supply chain including Denmark, China, Spain, Germany, the USA, and New Zealand. 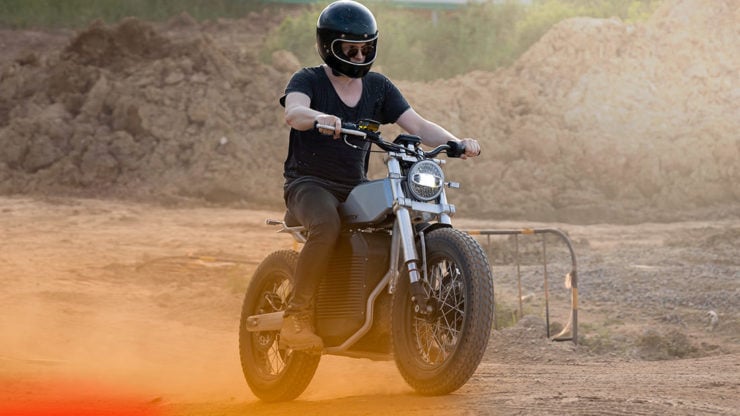 The eScrambler has been designed for both on and off road use, with the understanding that riders might want to go explore fire trails and bush tracks on weekends.

The company has backing from both an investment company and an R&D firm, and they’re currently ramping up for full scale production.

Deliveries are due to begin in the first quarter of 2023 for the USA, Australia, and New Zealand, with European deliveries coming online later in 2023.

When the Switch eScrambler prototype was first shown to the world two years ago it caught the motorcycle public’s imagination in a way that few electric motorcycles had before.

The design was both futuristic and somehow retro, a battery pack was fitted where the engine would normally go but otherwise it looked like a modern custom scrambler. 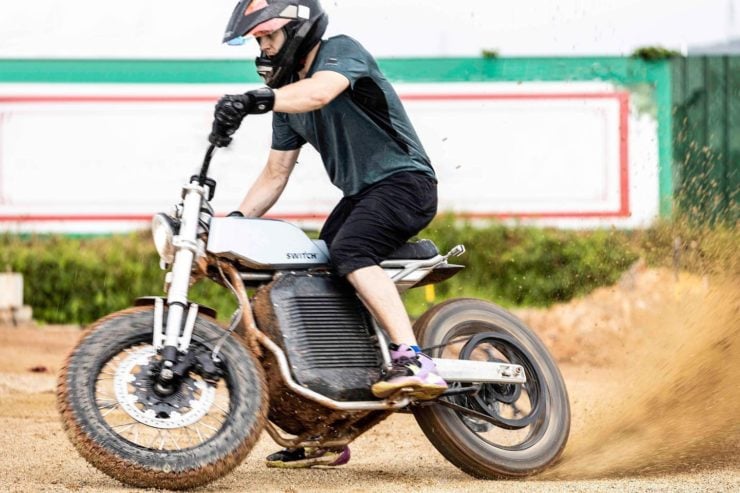 Electric motors produce 100% of their torque from 0 rpm, meaning it’s surprisingly easy to spin the rear wheel – particularly in the dirt.

“Like the old Yamahas, I wanted a product that people would be ripping apart in 30 years,” he says. “I want that people will be updating it with 2050 tech and styling, and in the process saying ‘wow, whoever designed and engineered this was really paying attention to detail’.” – Matthew Waddick, Switch Founder.

The Covid-19 outbreak slowed things down a little, company founder Matthew Waddick spent the time working on the design with the aforementioned Michel Riis – a Danish flat track champion and former Yamaha designer.

Every part of the motorcycle was developed using 3D software, the design was fine tuned, and tooling, jigs, and molds were created for the production run.

The production version of the Switch eScrambler is powered by a 50 kW IPM electric motor, that’s approximately 70 hp. Electric motors produce 100% of their torque from 0 rpm, meaning a gearbox is typically deemed unnecessary. 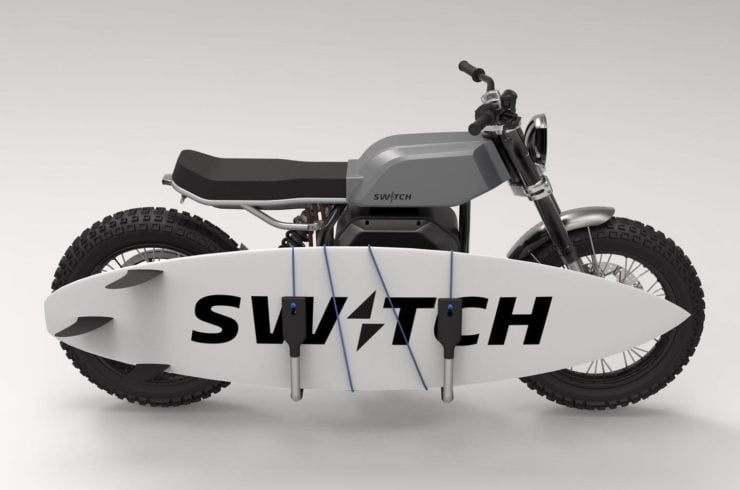 The ability to add a surfboard rack to the side makes the eScrambler a solid choice for those morning rides to find a good break.

Electrical power is provided by a 13 kWh LG 21700 li-ion battery pack which is contained in that large central case that provides weatherproofing. The electrical controllers and other ancillaries are all contained in the “gas tank.”

The frame of the eScrambler is aluminum alloy it has a 27º rake angle with Switch OEM upside down forks up front and a monoshock in the rear. The bike has a total weight of 170 kgs (375 lbs) and of course there’s no wet/dry weight difference.

Front and rear J.Juan disc brakes are fitted with ABS, the headlight is an LED unit, and power is sent from the motor to the rear wheel via a maintenance-free Gates carbon fiber belt.

The asking price is set at $11,999 USD, it’ll likely prove popular with urban commuters given the exceedingly low expected running costs combined with the reliability and ease of use we typically associate with electric motorcycles.

Pre-orders are now being taken with a $500 USD deposit requited to get yourself in the queue. 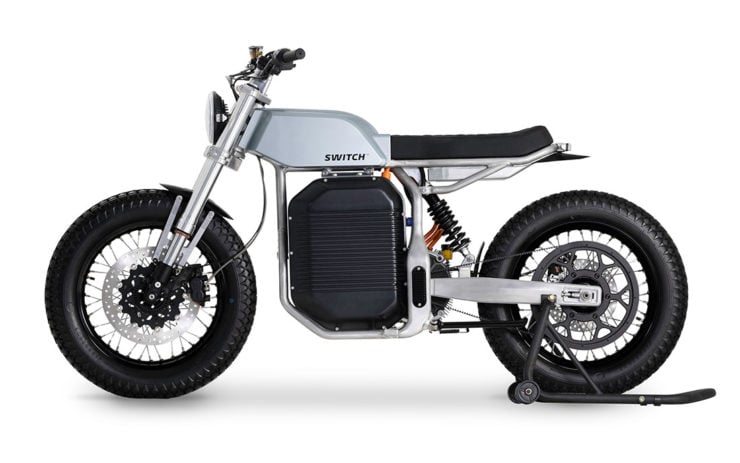 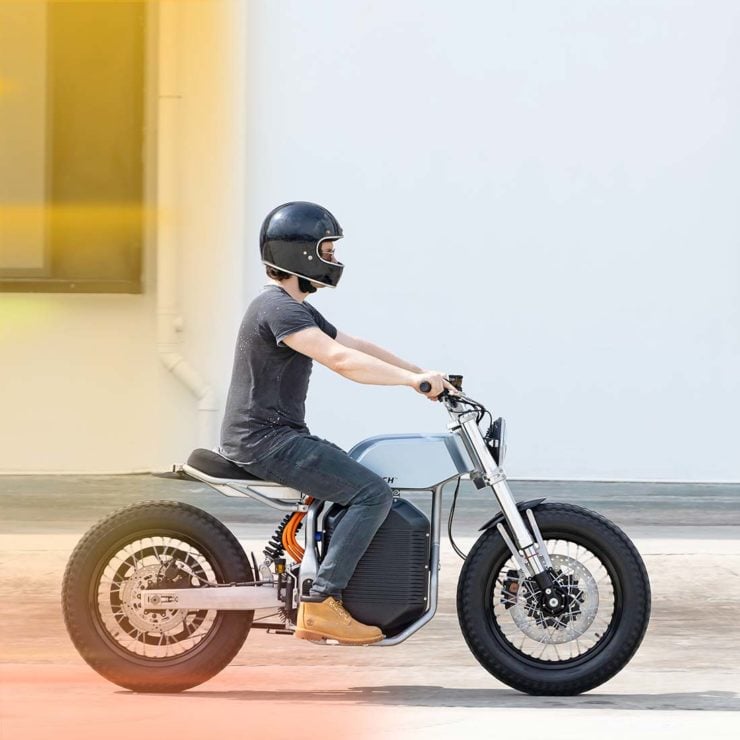 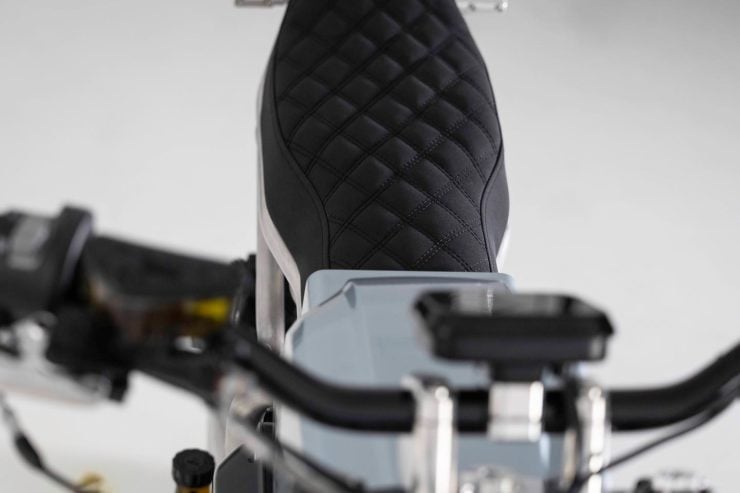 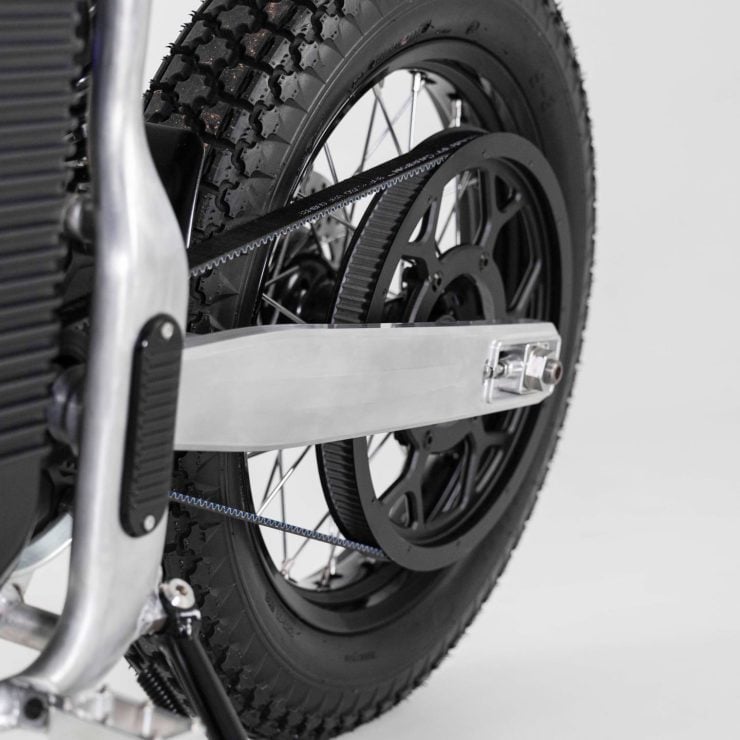 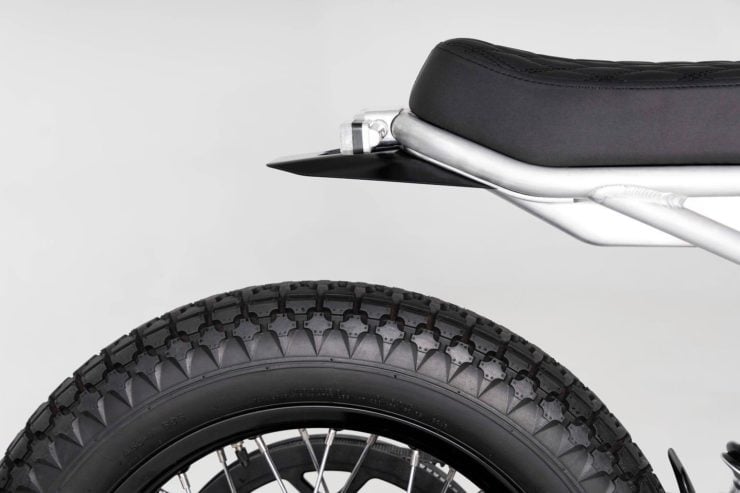 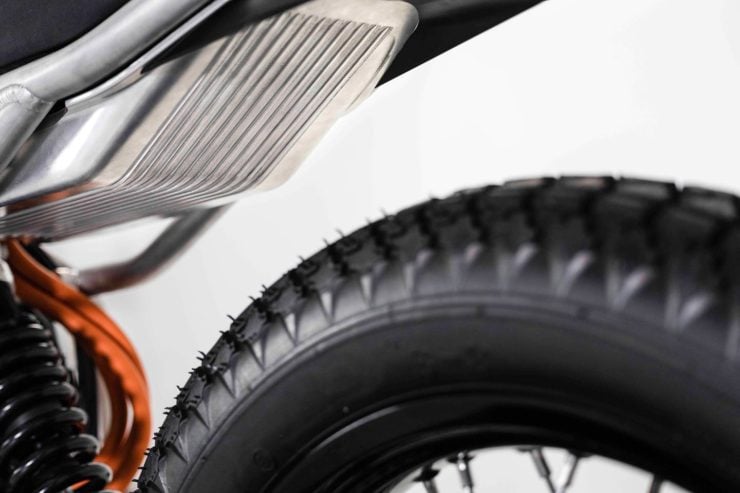 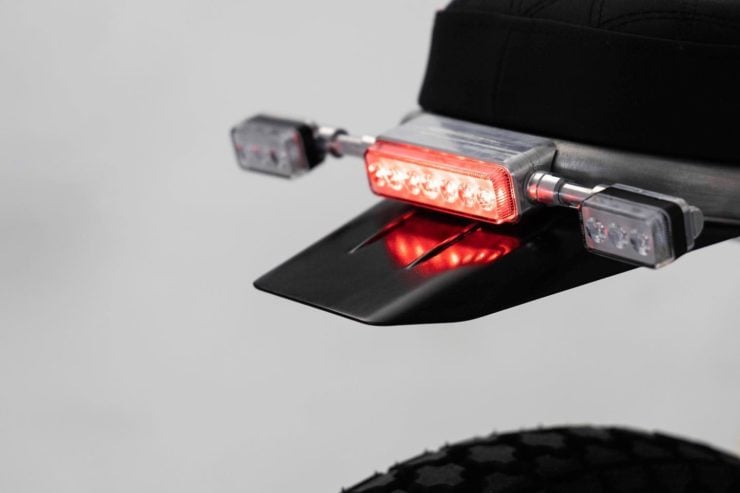 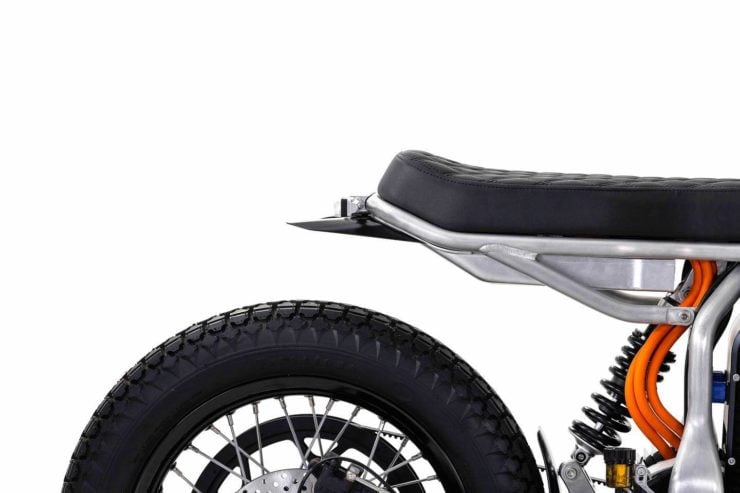 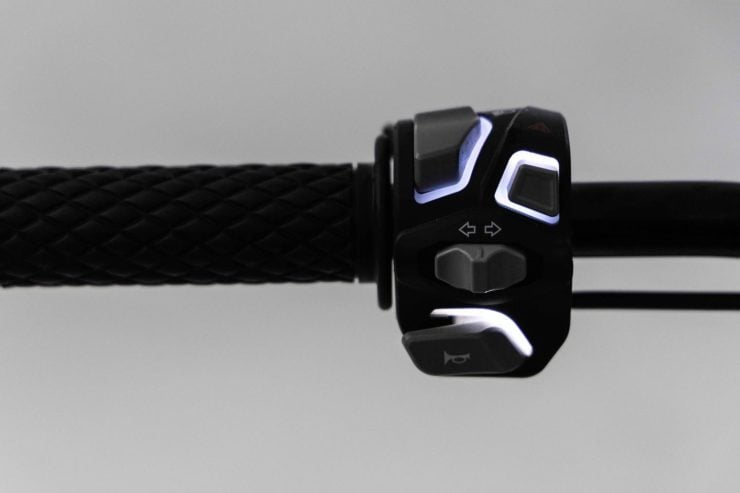 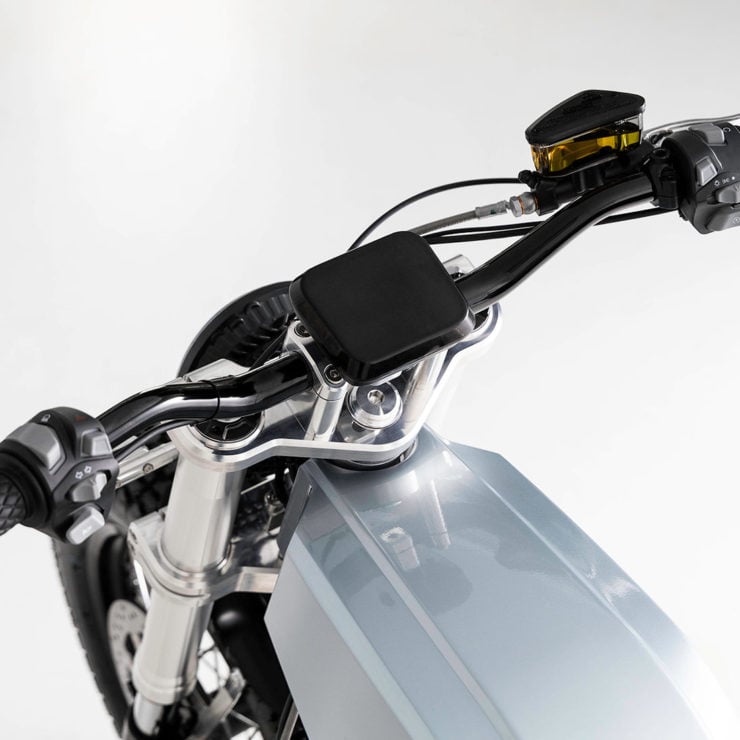 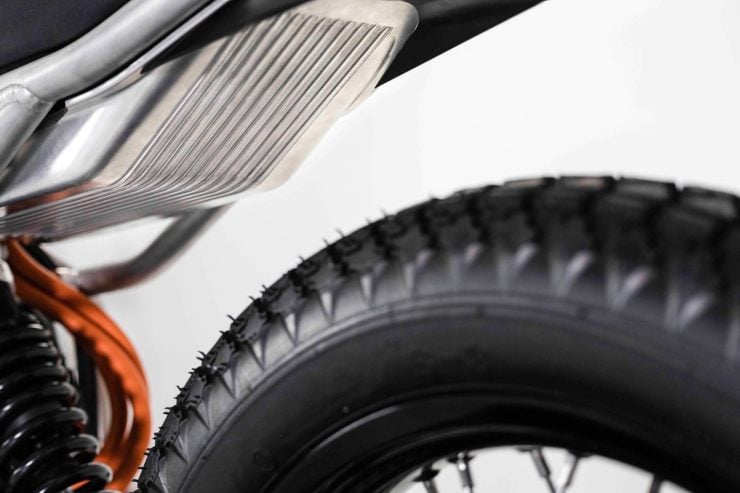