As an avid motorcyclist I have always been reassured if slightly baffled by helmet standards, it seems odd that there is more than one standard and as you dig deeper you learn that different standards have vastly different requirements and not surprisingly, there is serious controversy about which is best. A DOT certified lid might not pass a Snell test and a Snell might not pass a DOT. The same goes for the ECE R22-05.

So what does it all mean?

Well I’m going to give you a breakdown of what each standard means and how they’re different. I’ll briefly explain the positives and negatives, then I’ll let you decide for yourself.

Because at the end of the day, it’s your head on the line.

In various controlled conditions (ambient, heat, cold, moisture and/or U.V.), these tests all involve inverting a helmet with a “headform” inside it; the headform is weighted and it contains instruments for measuring liner velocity and G-forces. The helmet slides down a guide rail at high speed (usually at around 7.75 metres per second) and strikes an anvil; the anvil is shaped differently depending on the certification and the specific test being applied. 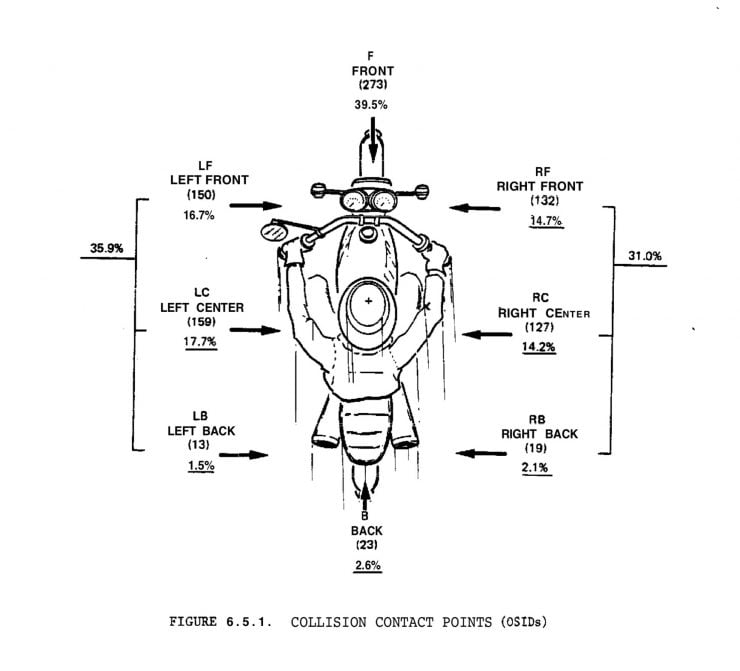 On impact the G-force exerted on the headform is measured, with imposed upper acceptable limits. The process is then repeated on the same impact point to ensure the helmet can protect from multiple strikes (usually two strikes of equal force) to the same area. An impact of 200 to 250 g’s to the head would result in a severe, though probably survivable brain injury and a 250 to 300g impact would result in a critical head injury. As with regularity rally scores or golf, a lower score is better, though even low force impacts may cause lasting damage.

Each standard may also require the subject helmet to pass a penetration test with similar strike repetition (DOT and Snell; this test was removed from ECE R22-05 in 1995 in favour of a shell integrity test), or withstand the effect of chemical solvents (Snell & ECE R22-05) or abrasion (ECE R22-05). Snell and ECE R22-05 also specifically test the chin bar of a full-face helmet and ease of helmet removal (where DOT does not) but all three of them measure how well the helmet will stay on in the event of a crash (because it won’t be of any use if it isn’t on your head). 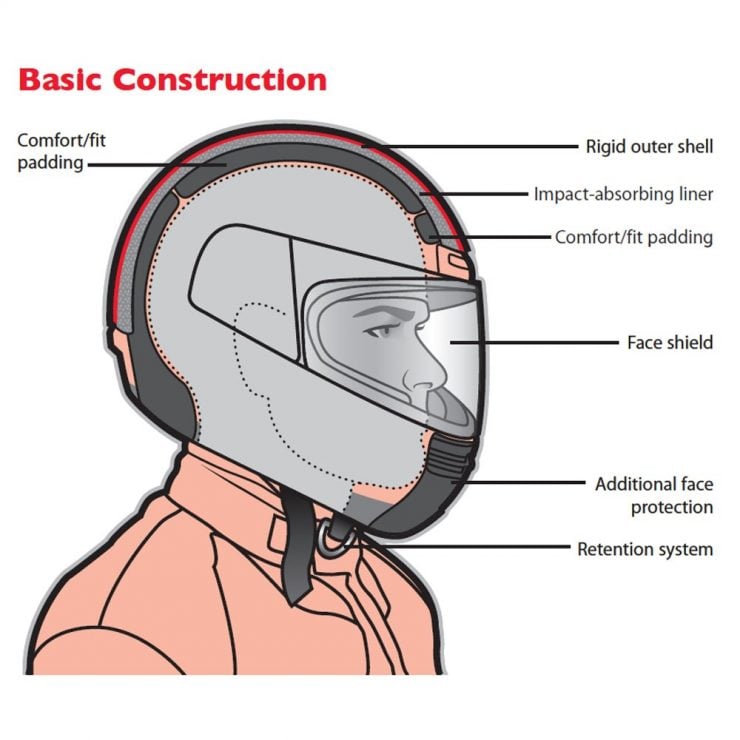 The DOT anvil is either flat or hemispherical (a steel ball shaped rather like a tennis ball) depending on the test. The DOT’s favouritism towards more shock-absorbent helmets seems to fall in line with recent studies indicating that absorbing the force of an impact is more important than resisting the impact (and, needless to say, motorcycles don’t tend to have much in the way of crumple zones). The DOT standard is self tested and applied by developers and manufacturers, with non-compliant gear restricted from being sold as “motorcycle helmets”. 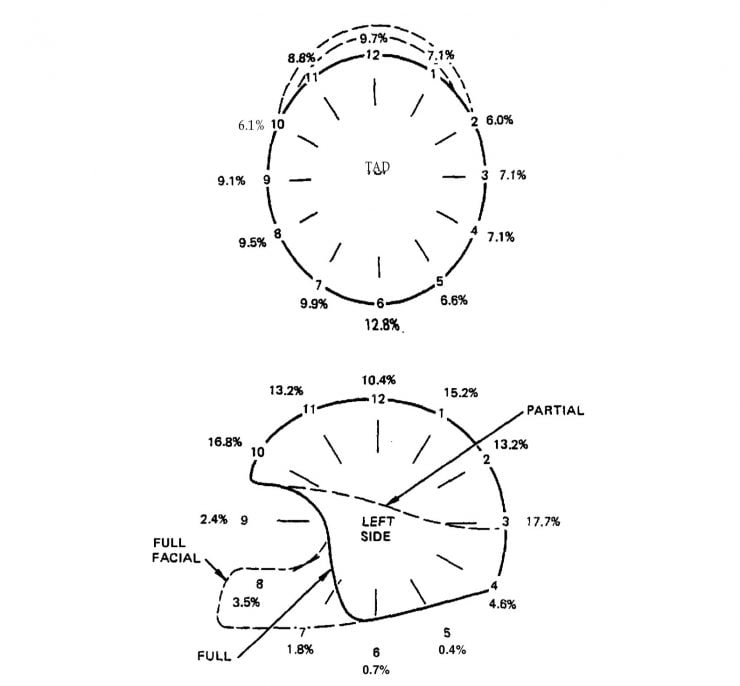 The Snell Memorial Foundation is a not-for-profit, independent organisation established in 1957 and is named after William “Pete” Snell, a famous racing car driver who was tragically killed in 1956 when a helmet failed to protect his head during an accident. Snell Foundation tests for impact management using hemispherical (ball), flat, and “kerb” shaped anvils, and 5-7 of each helmet model needs to be provided to the foundation for testing to be considered for certification, with further random spot checks on previously certified models. The older M2005 standard favoured a more shock-resistant helmet, allowing impact shock up to 290-300 g’s, but their M2010 standard led the charge for a more shock-absorbent helmet. Both standards under M2015 and the newest M2020 (set to replace M2015 in October 2019) allow peak acceleration of 275 g’s for the smaller headforms to 243-257g’s for the largest (dependent on testing under an M2020R or M2020D designation).

The D designation is intended to accommodate limits imposed by the DOT standard, and the R designation is intended for compatibility with the European ECE standard, and hopefully the Fédération Internationale de Motocyclisme [FIM] standard for competitive events, FRHPhe-01, though Snell certification doesn’t guarantee compliance with these. Although Snell’s directors have concluded the Head Injury Criterion (HIC) does little in evaluating helmet protective capabilities, to bring the R designation in line with FIM and ECE standards, they have incorporated a max limit for HIC of 2880 or less in each impact test along with the G-force limits (but it should be noted more than 90% of injuries with this HIC score would usually be fatal). Snell certified helmets are allowed by the AMA, WERA and CSS for professional motorcycle racing however the M2005 standard will no longer be permitted after 2011. 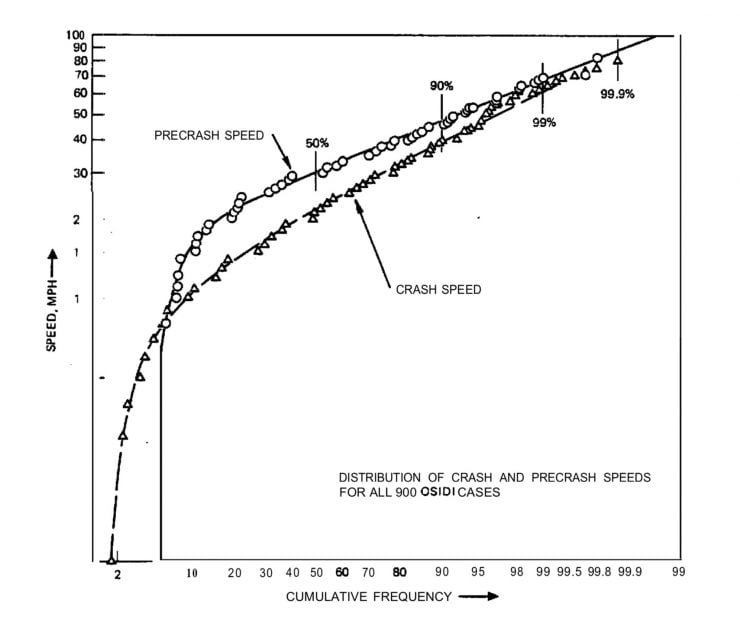 Developed by the rather lengthily named United Nations Economic Commission for Europe, this is the most common helmet certification internationally, required by over 50 countries worldwide. It too favours an impact-absorbent helmet allowing a maximum of 275g’s (the ECE R22-05 anvil is either flat or “kerb shaped” depending on the test). The ECE R22-05 is arguably the most demanding helmet certification process, requiring batches of more than 50 samples of each type of helmet to be tested and certified, with test results provided to the relevant government agencies for homologation prior to sale, and annual spot checks to confirm ongoing production quality assurance. Its wide use in a variety of high-level motorcycle racing classes is reassuring to many, and is approved for all competition events by AMA, WERA, CCS, and the big one – MotoGP, though FIM Grand Prix events will require the mandatory use of FIM homologated helmets from 2019.

The ECE R22-05 standard had more in common with the DOT standard than either the Snell M2005 or M2010 standards, but with the crossover of test procedures and similar G-force limits, and the Snell Memorial Foundation actively working towards accommodating the limits of their European and US counterparts in their testing, the newest M2020 certification is now much closer. A helmet could garner multiple certifications if it is offered up for testing and performs within each of the standard parameters.

Helmet certification standards are a highly controversial subject in motorcycle circles, everyone wants to believe their helmet’s certification standard is number 1 but at the end of the day it’s down to each rider to do their research, make their decision and the wear their (correctly fitted and fastened) helmet. Every time. 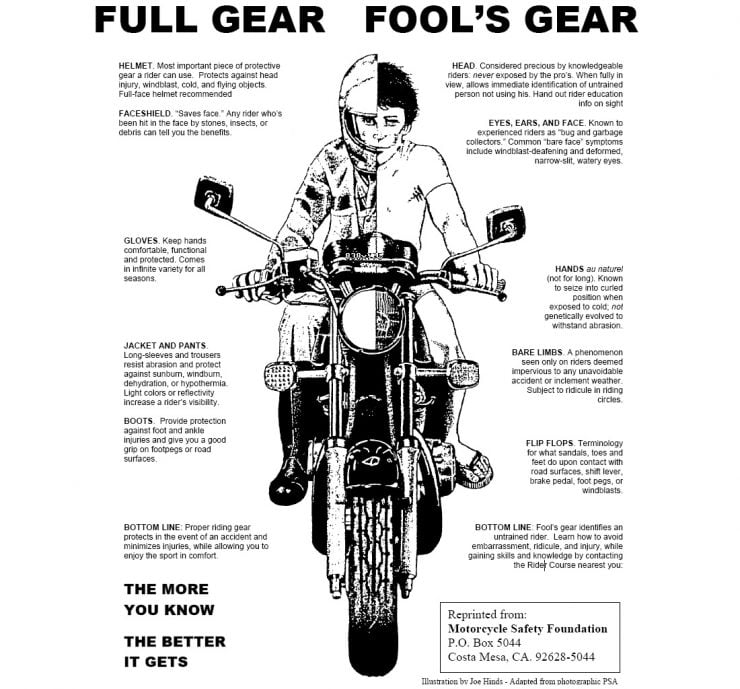