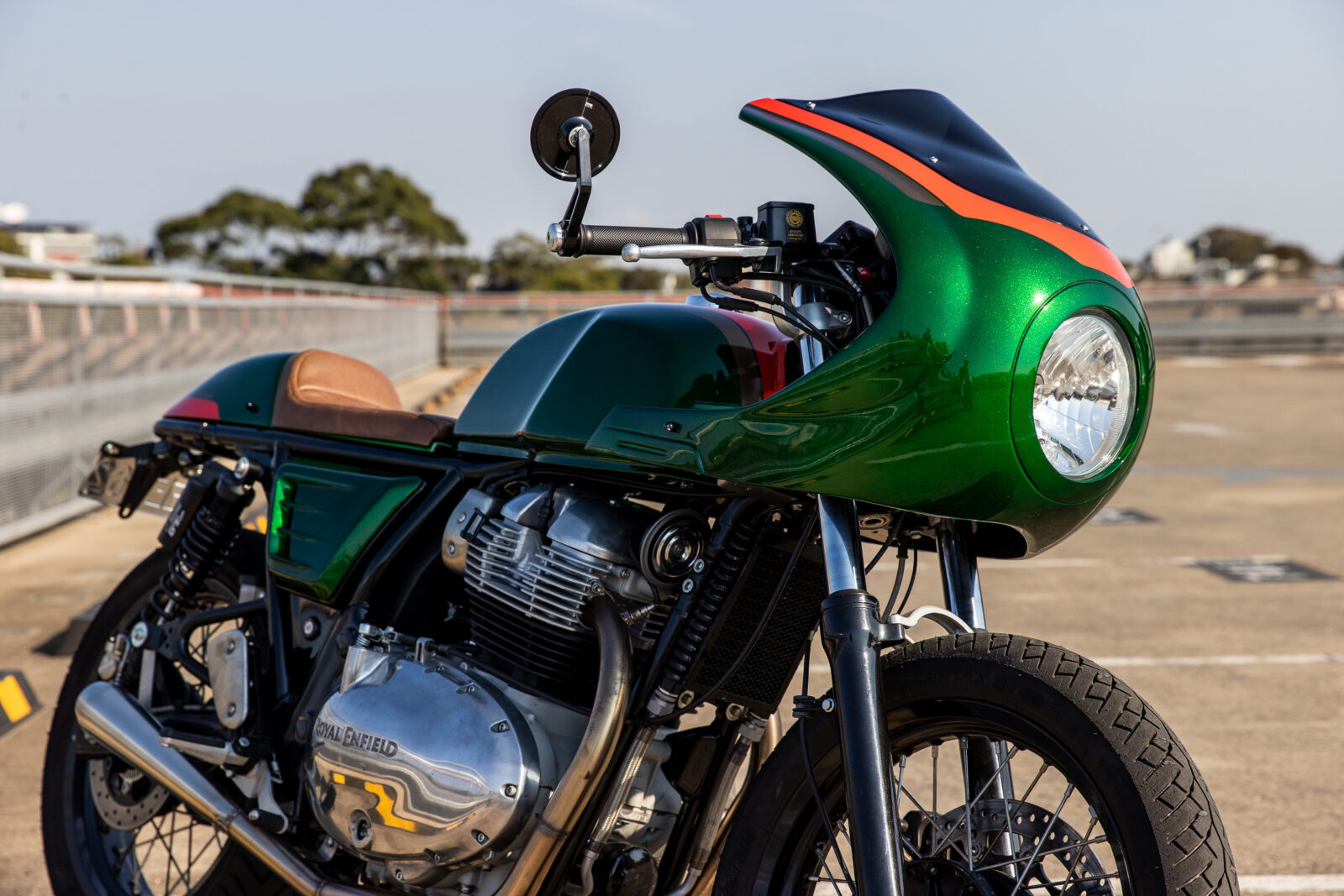 This Royal Enfield Continental GT 650 custom was built by Mark Hawwa, a man best known in the global vintage and custom motorcycle world as the founder of The Distinguished Gentleman’s Ride – an annual charity ride that raises millions of dollars for prostate cancer research, men’s mental health, and suicide prevention.

The project to build a cafe racer version of the Royal Enfield Continental GT 650 began last year when the Indian motorcycle manufacturer approached Mark with the idea. The concept included the caveat that the customizations would be bolt-on in order to ensure that GT 650 owners around the world would be able to do them too regardless of skill level.

Mark is well known for his love of fast cars and motorcycles so it was clear from the outset that this build was never going to be purely cosmetic. The bike would have to be not only changed from an aesthetic perspective but it would also have to be upgraded from a performance perspective.

With the above criteria in mind the first order of business once the shiny new GT650 arrived was to take it to Sydney Motorsport Park for a visit to the team at motoDNA to set a baseline lap around the circuit – the best number of the day was 1 minute 20 seconds.

The next step after this was a visit to Harley Borkowski of RB Racing, he rolled the bike up onto his dyno and recorded a baseline power reading of 42 hp. With the lap time and dyno readings giving a starting point, the build began in earnest.

Above Video: Watch the full 11 episodes showing Mark and the team transforming the bike.

The first step would be to help the engine breathe a little easier, so the stock exhaust was removed and replaced with a new system from James at Spread Cheese Fabrication. James built new stainless steel headers for the bike and paired them with a pair of 13″ Big Mouth stainless steel reverse cone megaphones. This dropped the curb weight of the bike by a remarkable 14 kilograms (30.8 lbs) and significantly eased the engine’s breathing.

A new Power Commander was added and the bike was taken back to Harley for tuning on the dyno, with just these two modifications engine power jumped almost 15% to 48 hp.

Attention now shifted to the suspension and making it better suited to handling the 105 kilogram (231 lb) curb weight of Mark Hawwa. The forks were removed and sent to Suspensions R US in Victoria who worked their magic on them, they were shipped back accompanied by a pair of YSS Suspension RG362 piggyback shock absorbers for the rear.

With all the parts now in place just one job was left – paint. As most of you know, the paintwork can make or break a project and it’s far harder to get right than the average person realizes. Because of this Mark went directly to guys at Colourfuel in Kirrawee – the most respected motorcycle paint crew in Sydney.

After much discussion a new paint scheme was chosen, the base color would be British racing green as a hat tip to the British origins of Royal Enfield, this would be joined by orange accents as a clever reference to the Indian national flag. 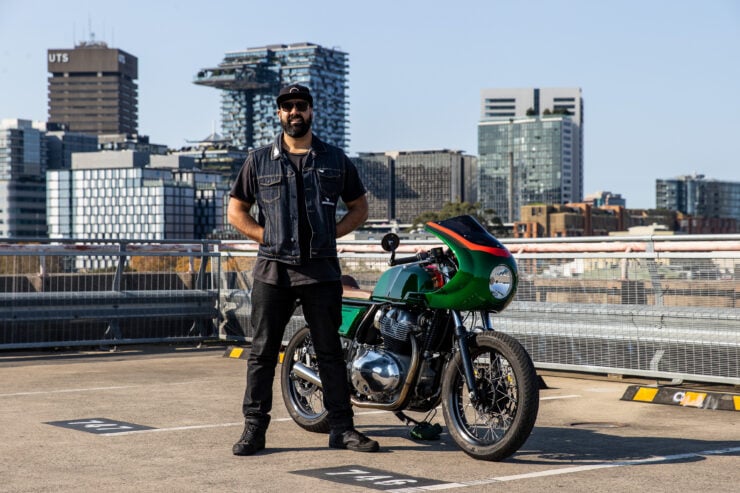 Above Image: Mark Hawwa standing next to the newly finished GT 650 on a rooftop in Sydney, Australia.

Once it had all been bolted together it was inspected by Brad at Tracker & Co, a popular motorcycle guru in Sydney who’s seen it all before and helped many (including your humble scribe) though all manner of mechanical maladies.

Once Brad gave the bike the green light it was ridden over to Jason at Gasoline Motor Co. who provided some some C-Racer parts for the build including a new seat and cowl, and Autologue Design sent over the side covers and that eye-catching “Reck 2.0” front fairing.

With the bike now complete there was only one thing left to do – return to Sydney Motorsport Park and set a new lap time to see how the bike would perform. Remarkably Mark was able to set a time of 1 minute 14 seconds – 6 seconds faster than his original lap. Later in the afternoon the bike was handed over to a professional who brought the time down further still to 1 minute 10 seconds.

“I came to the track excited to see how it would perform but not in my wildest fantasies did I think it would turn into the most fun I’ve had on track. Part of that was the battle with a professional racer to set the fastest time and part of it was just carving corners knee down and outperforming other intermediate riders on litre plus sports bikes.” – Mark Hawwa

With the bike now complete Mark is waiting to see if he’ll get approval from Royal Enfield for a stage two to the project, to add more power and get those lap times down further.

If you’d like to read more about this project you can click here to visit the article on Pipeburn.com 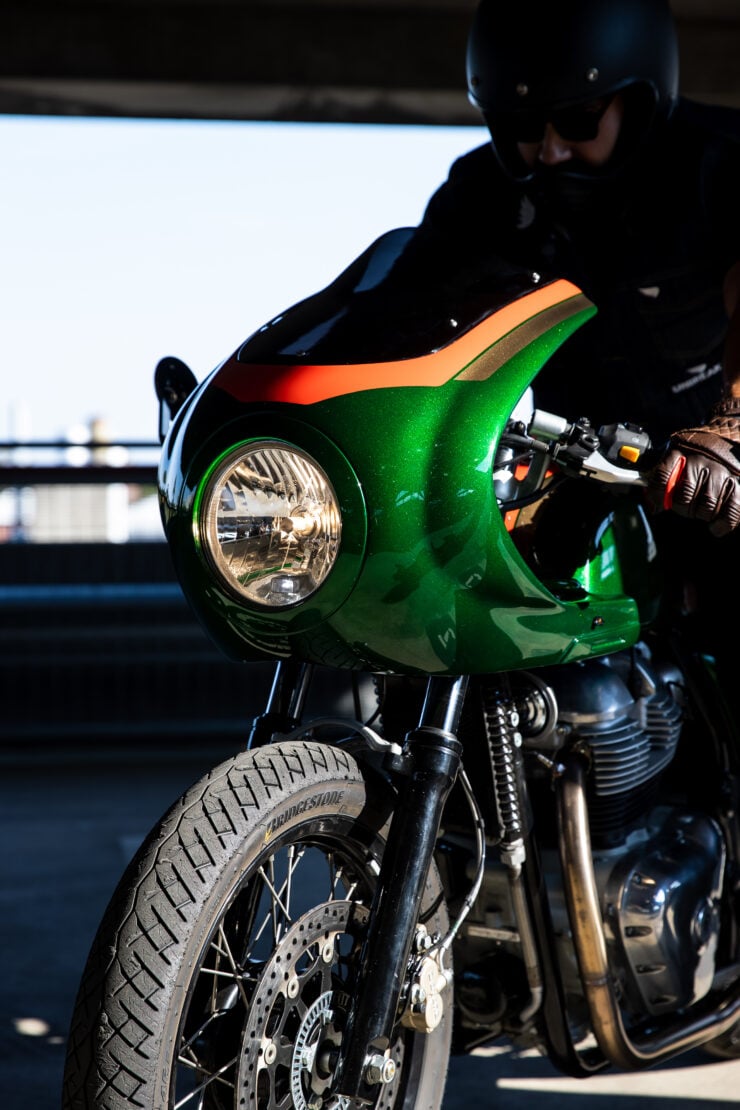 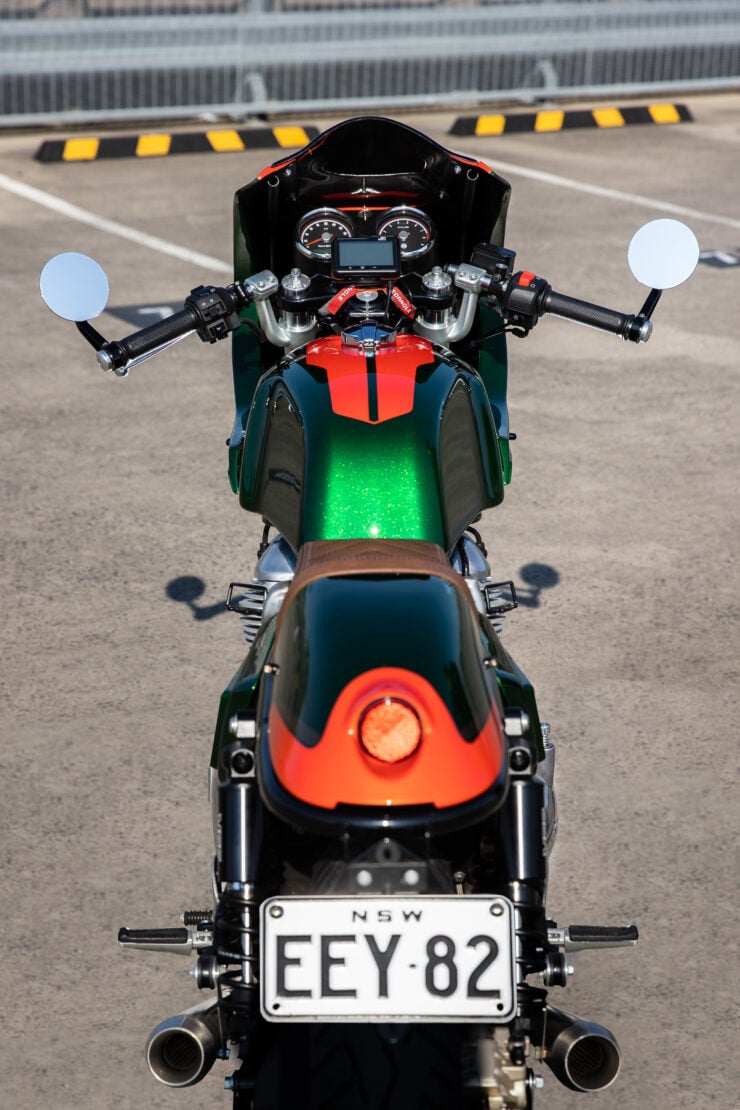 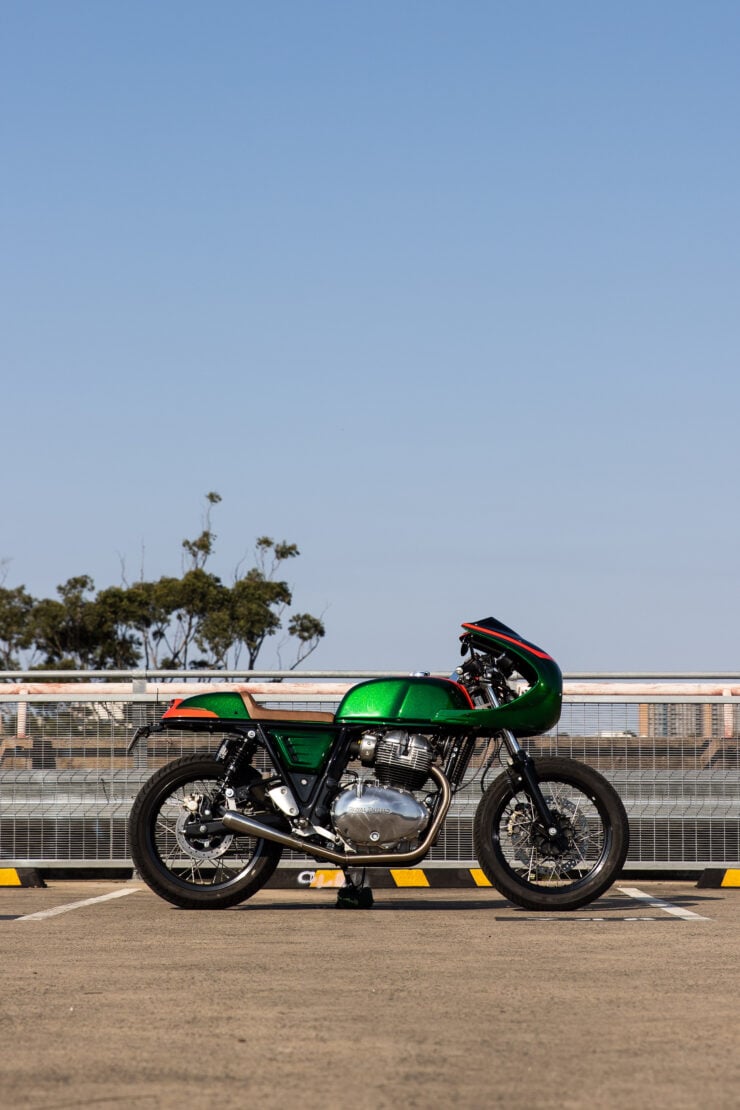 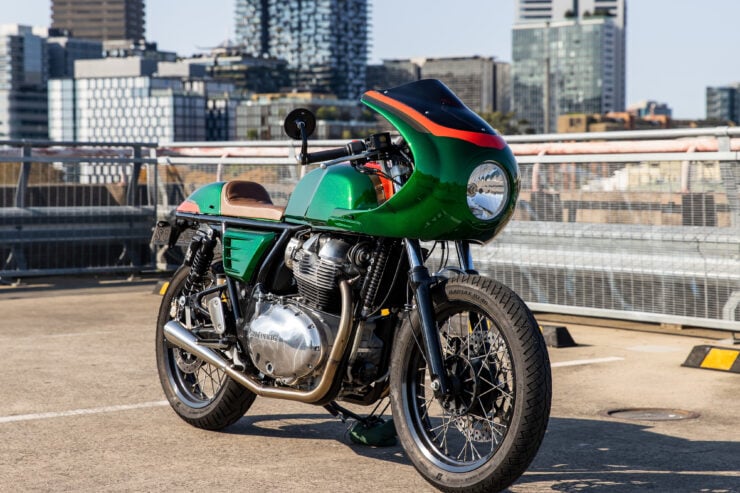 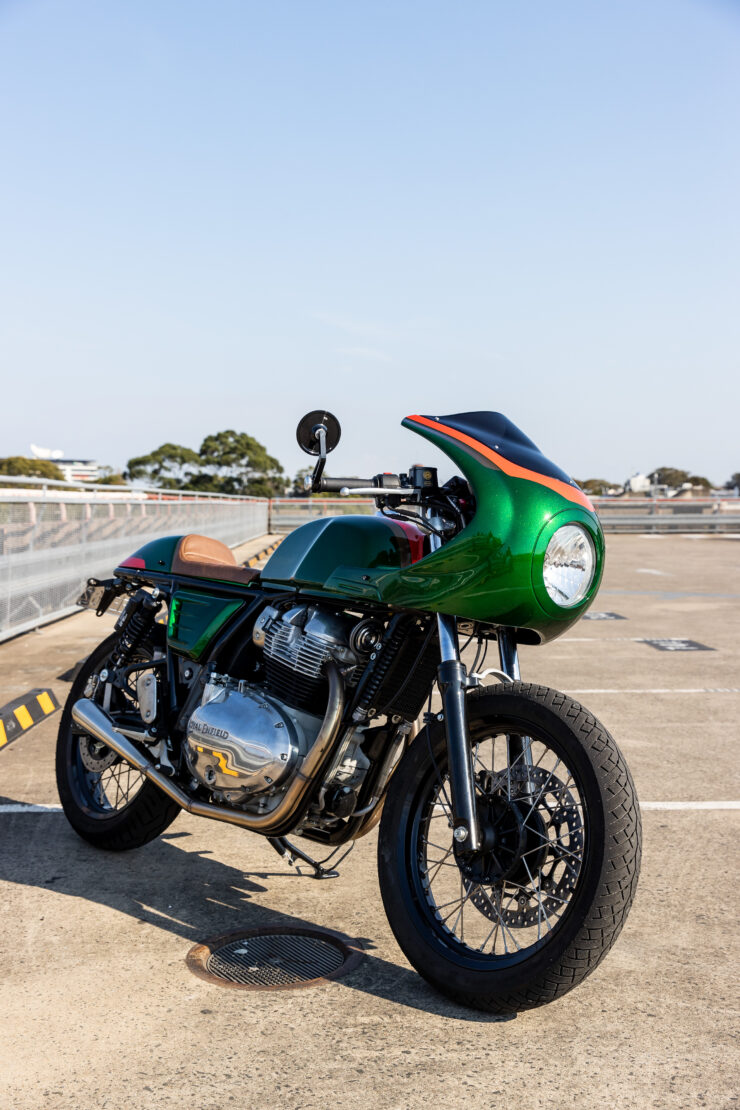 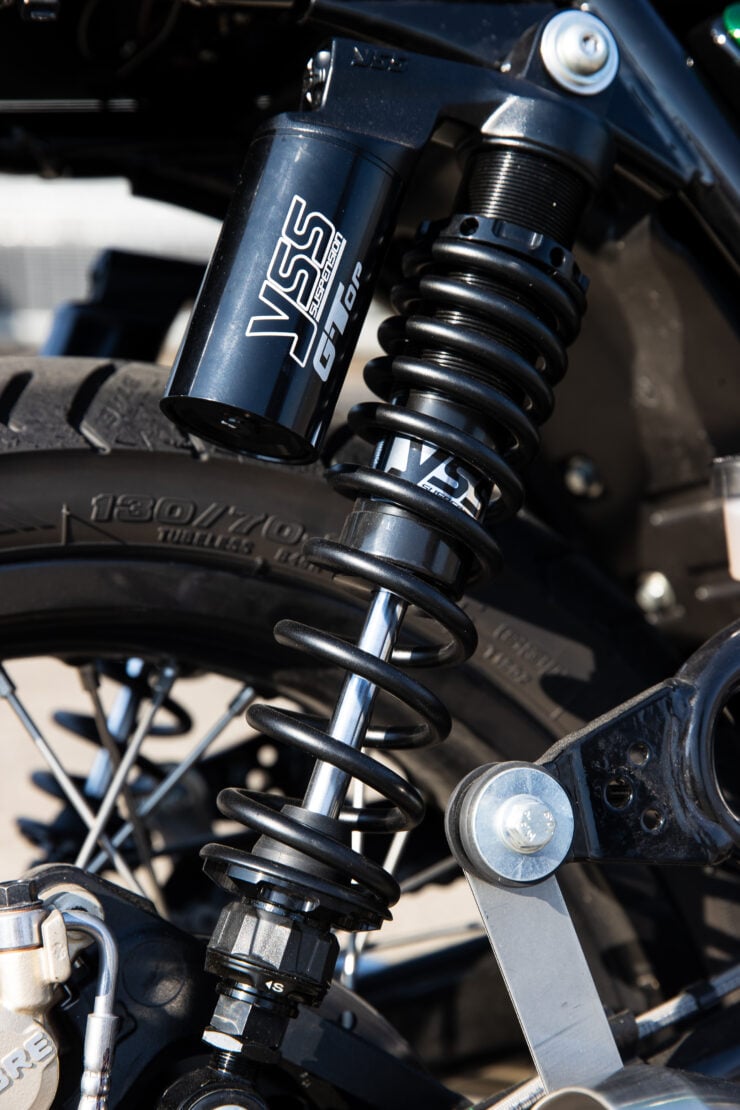 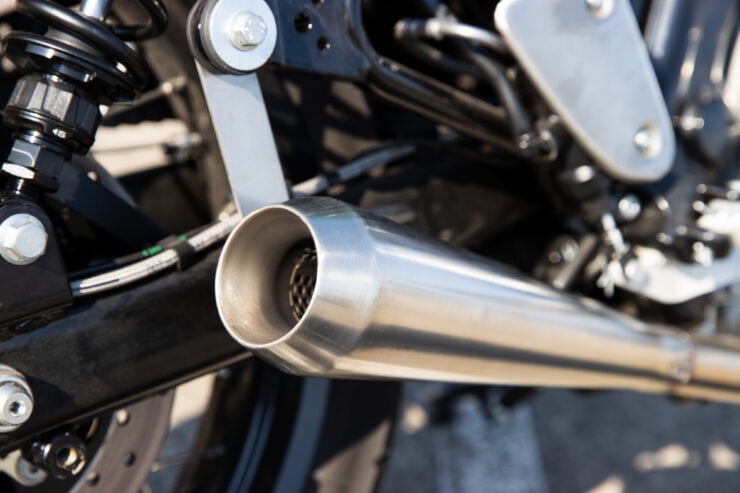 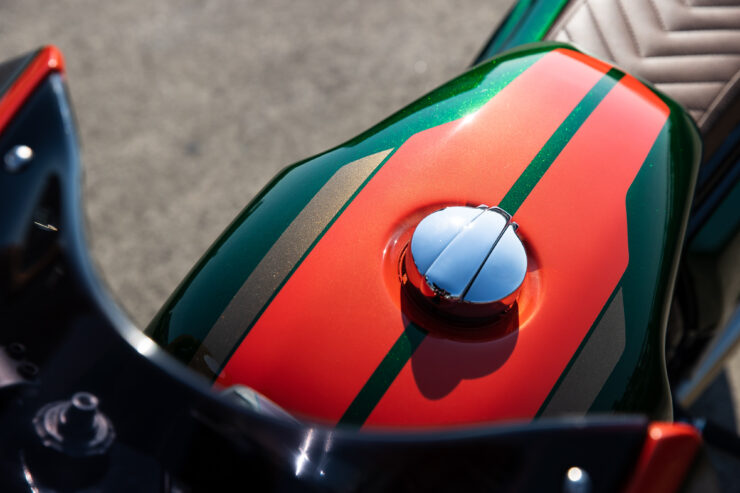 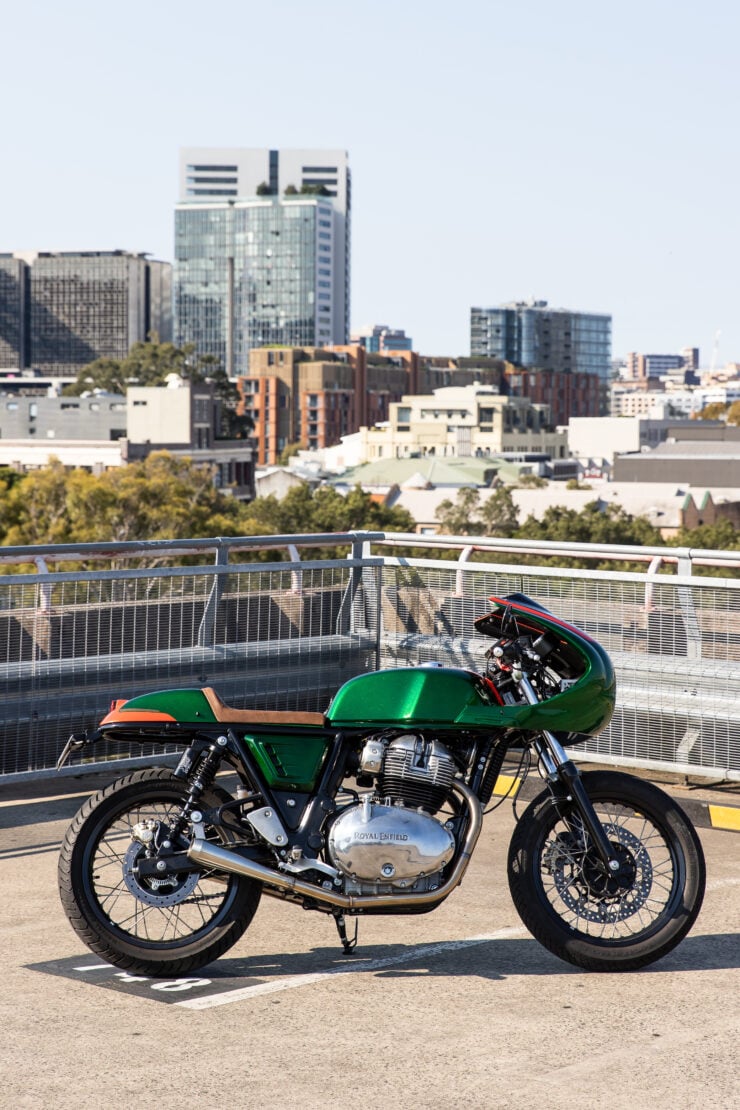