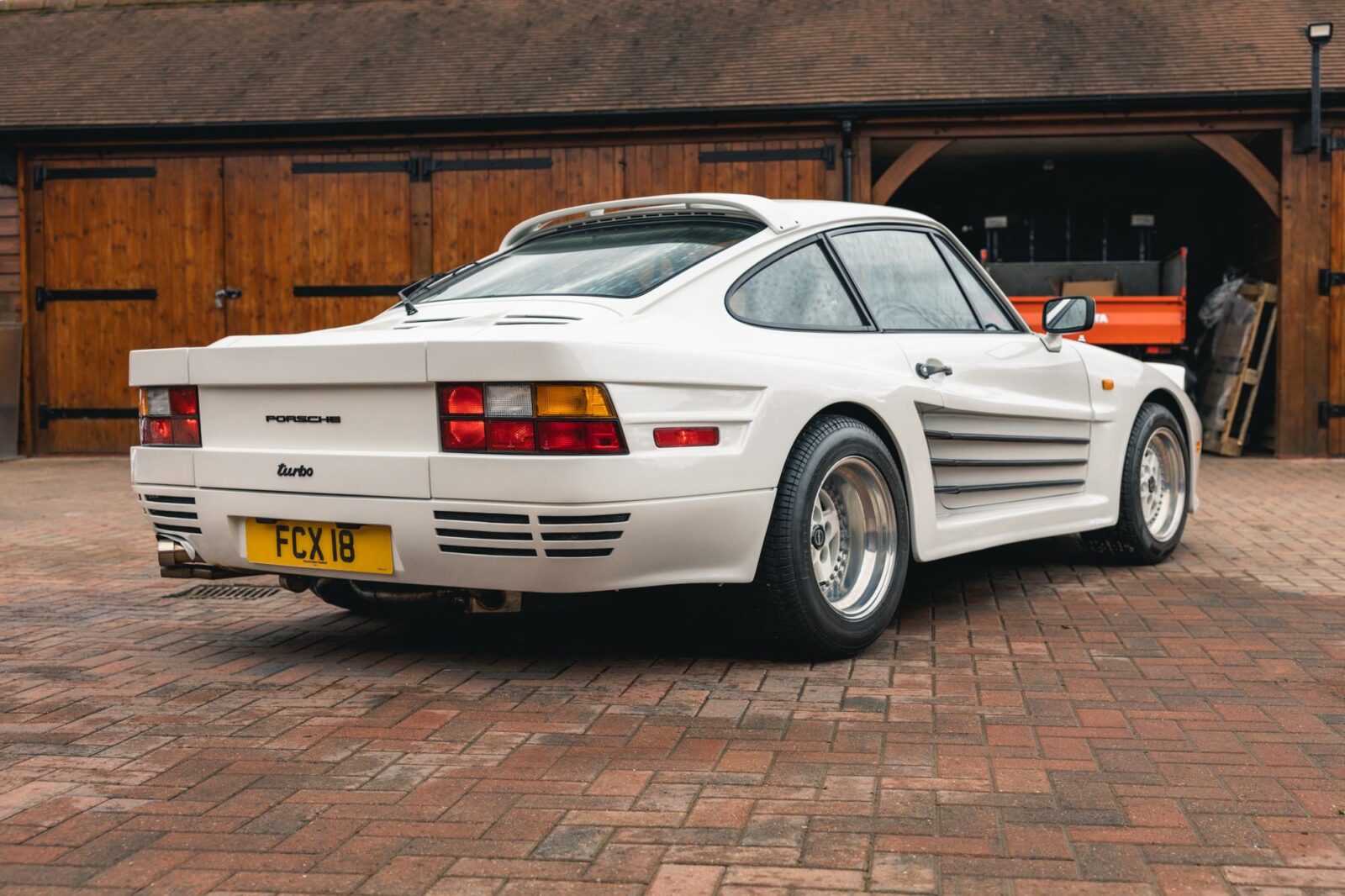 This is the Rinspeed Porsche R69 Turbo, or as it was better known in the 1980s, the Porsche Testarossa.

This nickname was unofficial of course and it’s likely that neither Porsche or Ferrari were particularly fond of the limited production car from Switzerland, but approximately 12 are thought to have been built for clients in Europe around the world.

In order to get yourself a Rinspeed Porsche R69 Turbo in the 1980s you first needed to buy yourself a Porsche 930, the turbocharged variant of the Porsche 911.

Once you had your 930 you would have it shipped to Rinspeed in Switzerland, and they set to work transforming it into a car with no small amount of inspiration from the Ferrari Testarossa.

The R69 Turbo was launched in 1985, just a year after the Testarossa had been unveiled by Ferrari at the 1984 Paris Auto Show. The reception enjoyed by the new car had been overwhelmingly positive, with its distinctive side strakes becoming an instant global sensation.

Rinspeed had been founded in 1977 as Rinspeed Garage, named for founder Frank M. Rinderknecht. They initially focussed on importing sunroofs from the United States and converting cars to make them suitable for disabled drivers. 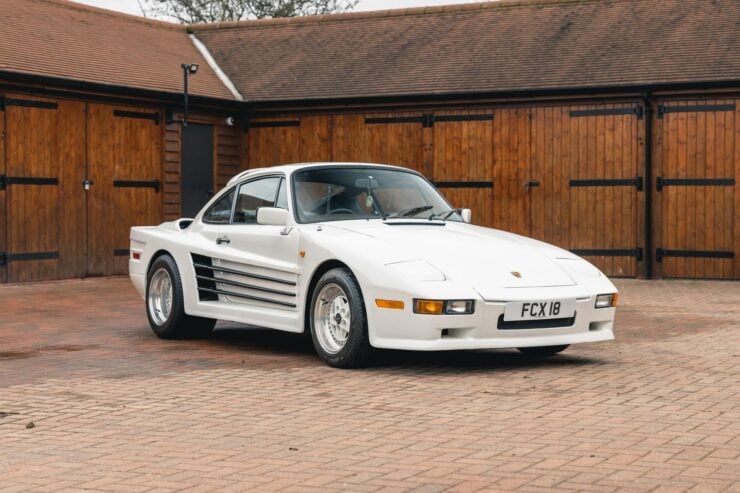 Above Image: The R69 is undoubtably a child of the 1980s, though the styling has been somewhat controversial over the years.

In 1979 Rinspeed unveiled the VW Golf Turbo based on the GTI, and they later released a Golf with gullwing doors. As the 1980s progressed the company turned their attention towards the Porsche 911, unveiling the Rinspeed R69 Turbo in the mid-80s to a mixed global reaction – some loved it and others were a little more critical.

The fiberglass bodykit for the R69 included a new front section, new sides, and a new tail. The sides were clearly influenced by the Testarossa with their long strakes, the nose was also transformed with pop-up headlights borrowed from the Porsche 944, and the new wider rear made use of Porsche 944 taillights.

Performance of the Porsche 911 Turbo was famously brisk, it was the fastest production car available in Germany when it was introduced in 1975.

Porsche had been experimenting with turbocharged cars since the late 1960s however this experimentation was kicked up a notch in order to create the turbocharged Porsche 934 and 935 models for Group 4 racing.

In order to homologate these cars for racing Porsche needed to build and sell a minimum of 400 over two years. The 911 Turbo proved so popular that Porsche sold 400 of them before the end of 1975, homologating the car in the process. They would sell 1,000 of them by May of 1976 and the car remained the marque’s halo model until the release of the 959 in 1986.

The performance capabilities of the 930, particularly the earlier models, was borderline brutal. Turbo lag was a notable issue and it caught many drivers by surprise, resulting in quite a few wrecked early Turbos and the car gained a reputation as a widowmaker.

Porsche worked on refining the model over its production run and later examples tend to have more predictable road manners than their early forebears. 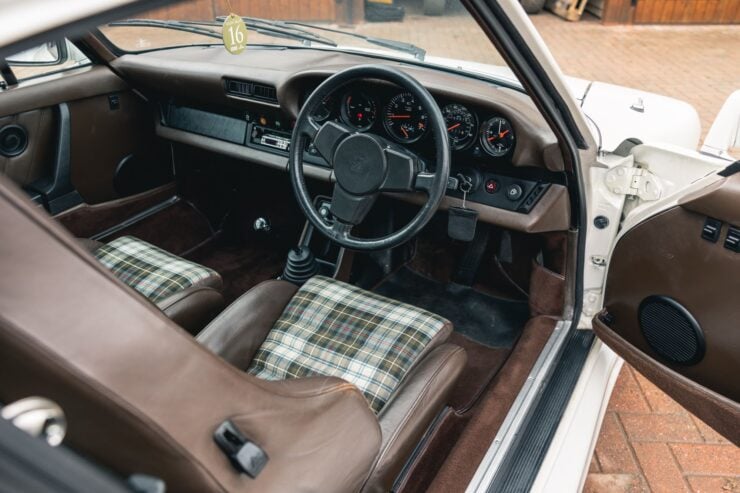 Above Image: The interior of the car has shades of the 1970s about it, with those famous Porsche plaid seats and brown everything else.

The first year Porsche 911 Turbo was capable of 0 to 60 mph in just 4.9 seconds, a remarkable feat by the standards of the mid-1970s and still an impressive figure today.

The top speed was 155 mph however this was limited to some degree by the use of a 4-speed gearbox, Porsche didn’t have a 5-speed that could handle the torque however the Getrag G50 five-speed manual transmission would become available in 1989.

The car you see here is one of those original ~12 R69 Turbos from Rinspeed. It’s finished in Pearl White though in the ’80s this became known as “Cocaine White” in certain circles. It’s riding on 15 inch Gotti split-rim alloys with white centers and the interior has shades of 1970s-retro cool thanks to the extensive use of brown and plaid.

It’s currently showing 69,478 miles on the odometer and a full mechanical rebuild was completed by Porsche Centre Leeds at 67,334 miles including new studs, O-rings, sealing rings, and gaskets, as well as vapour blasting of components. The turbocharger was reconditioned, the fuel tank was replaced, and two new fuel pumps and fuel filters were also fitted.

If you’d like to read more about this unusual Porsche or place a bid you can click here to visit the listing on Collecting Cars. It’s up for auction now with the bids sitting at £50,000 at the time of writing. 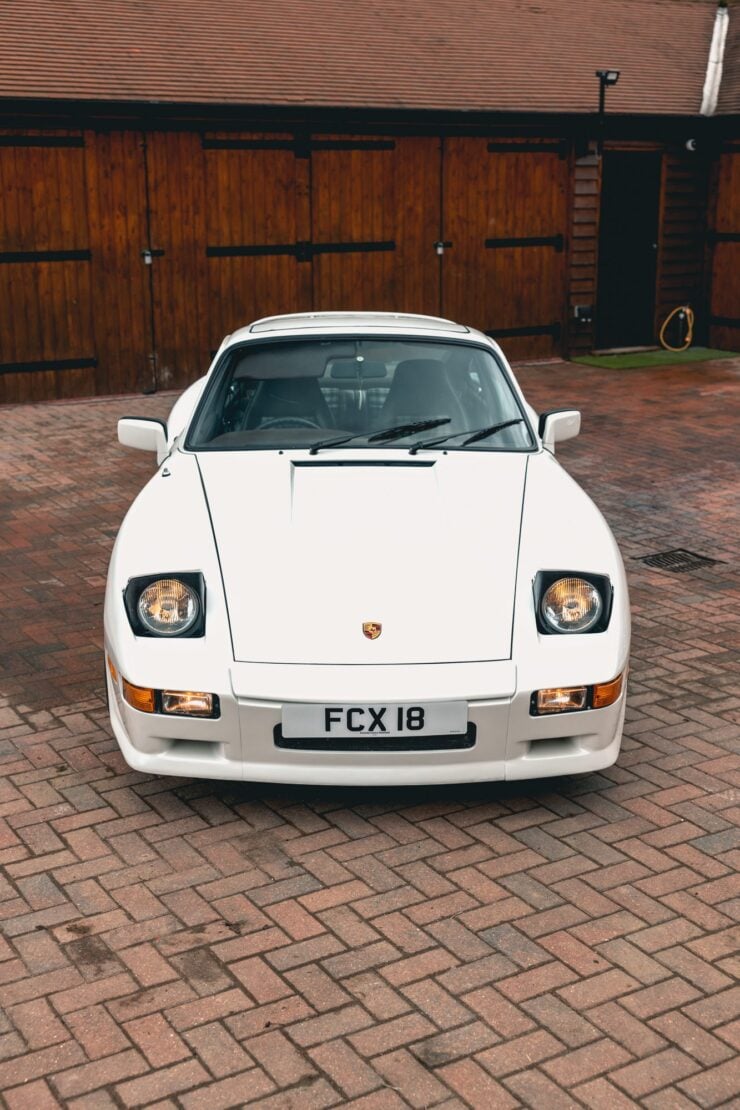 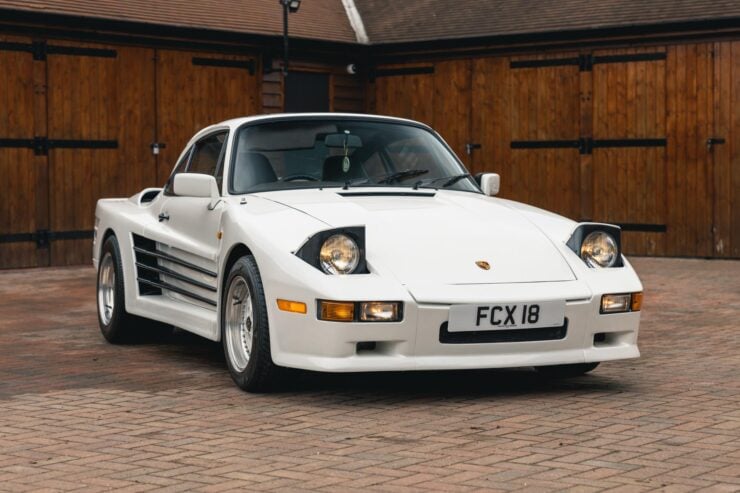 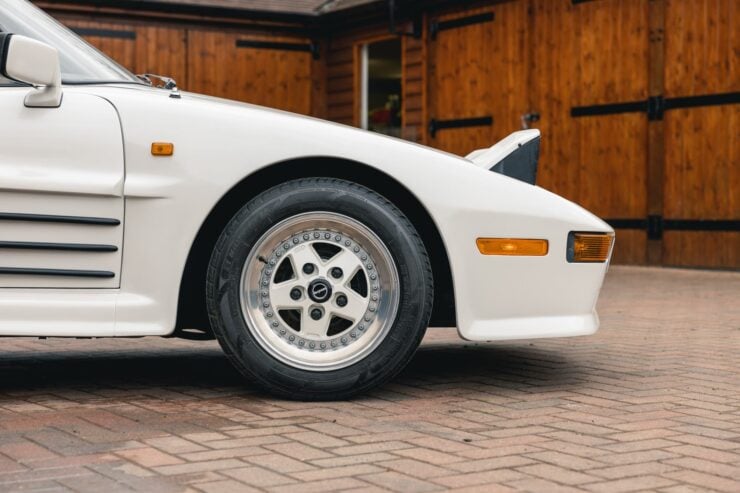 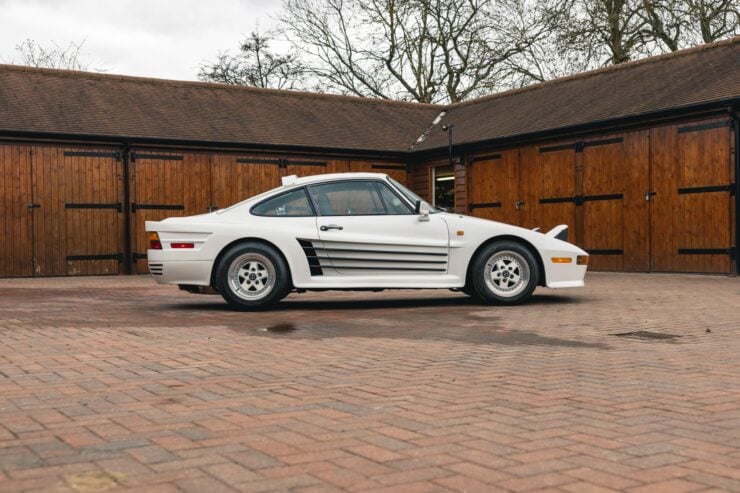 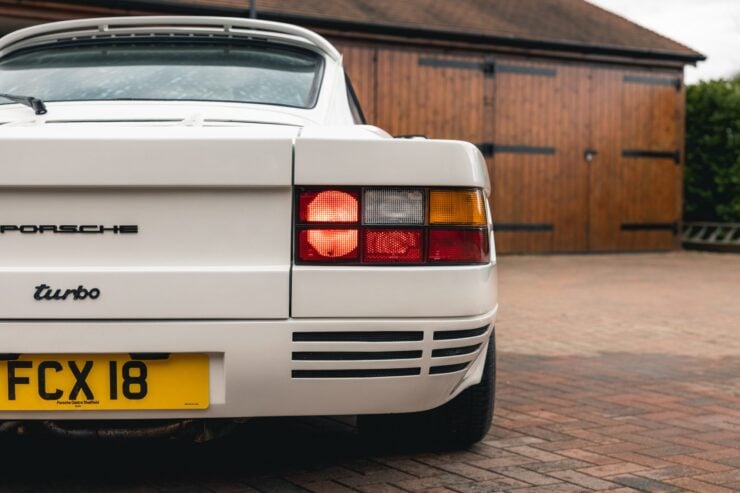 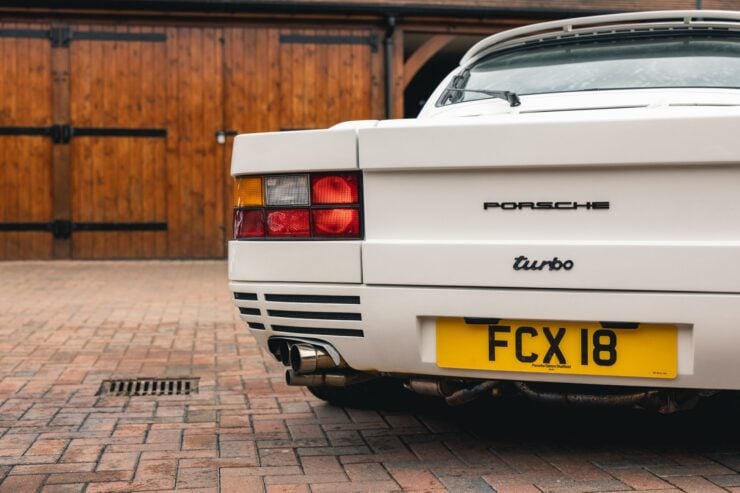 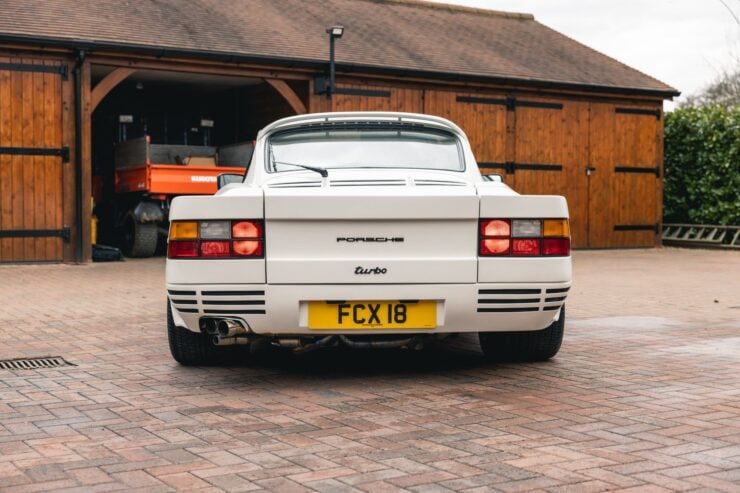 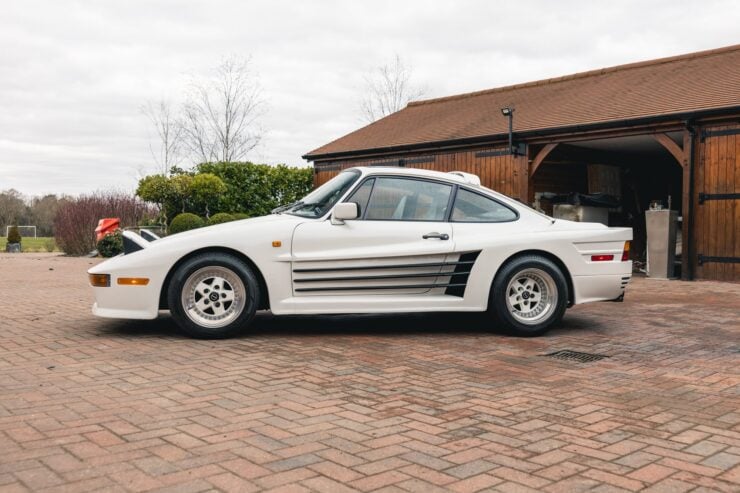 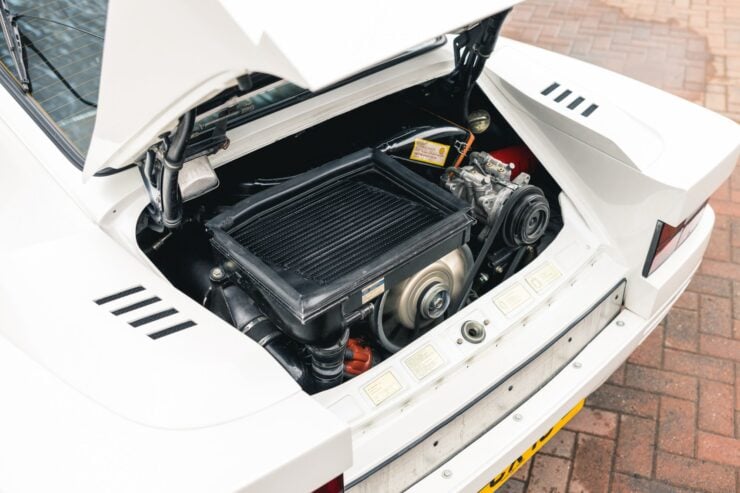 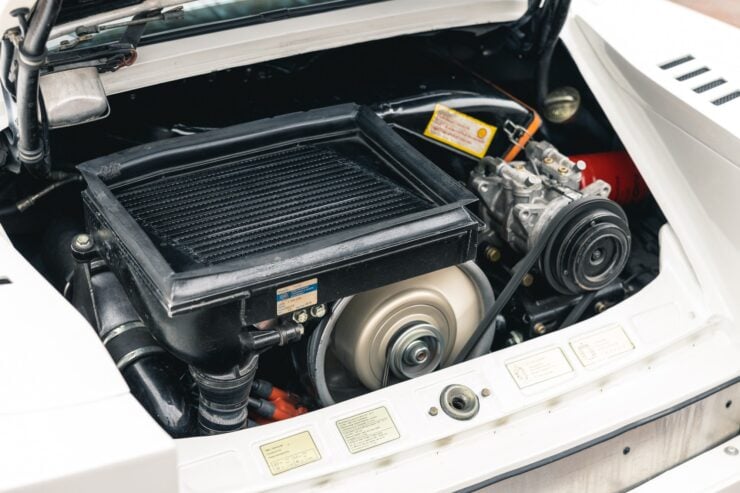 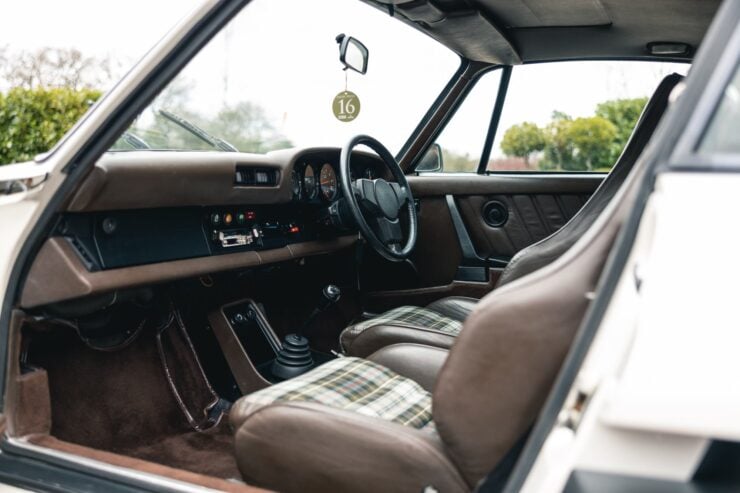 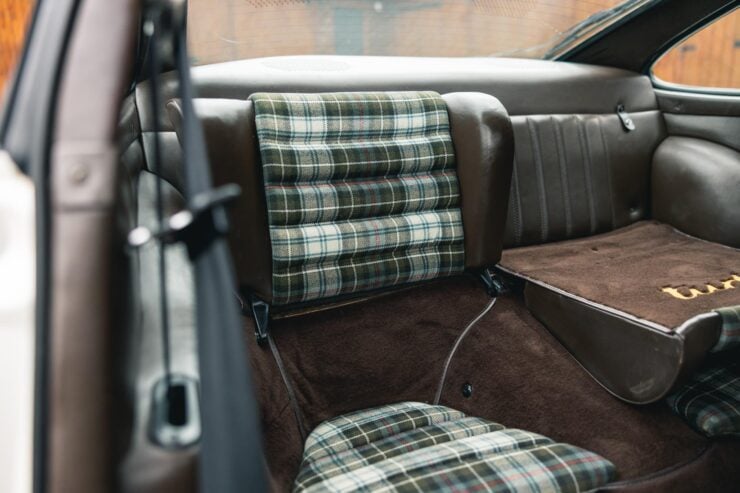 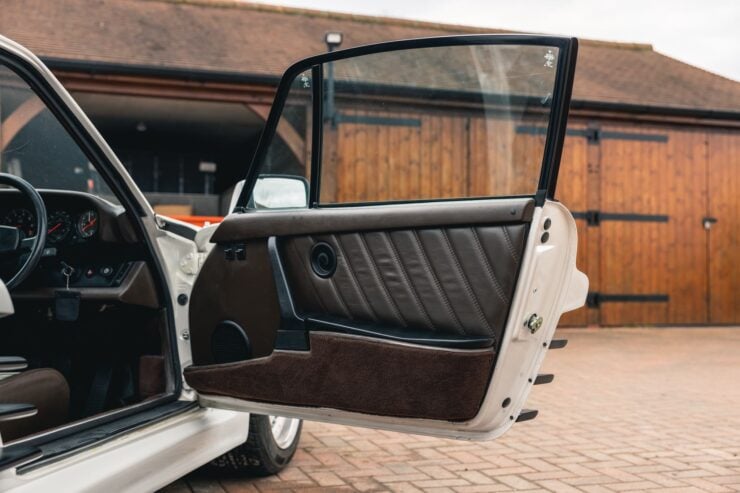 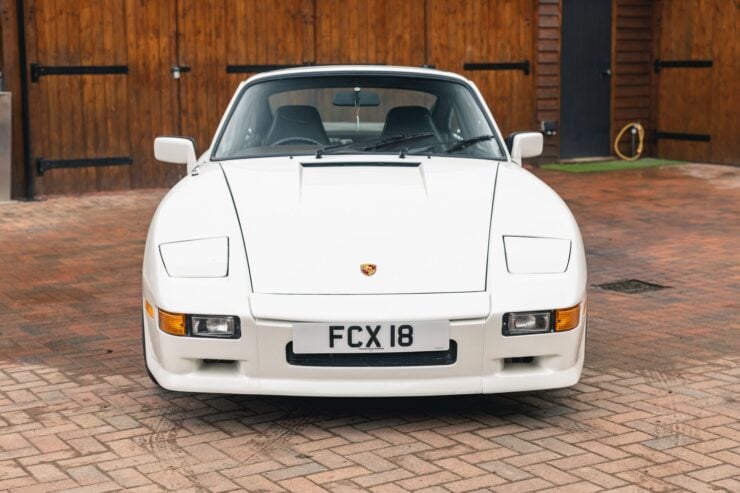 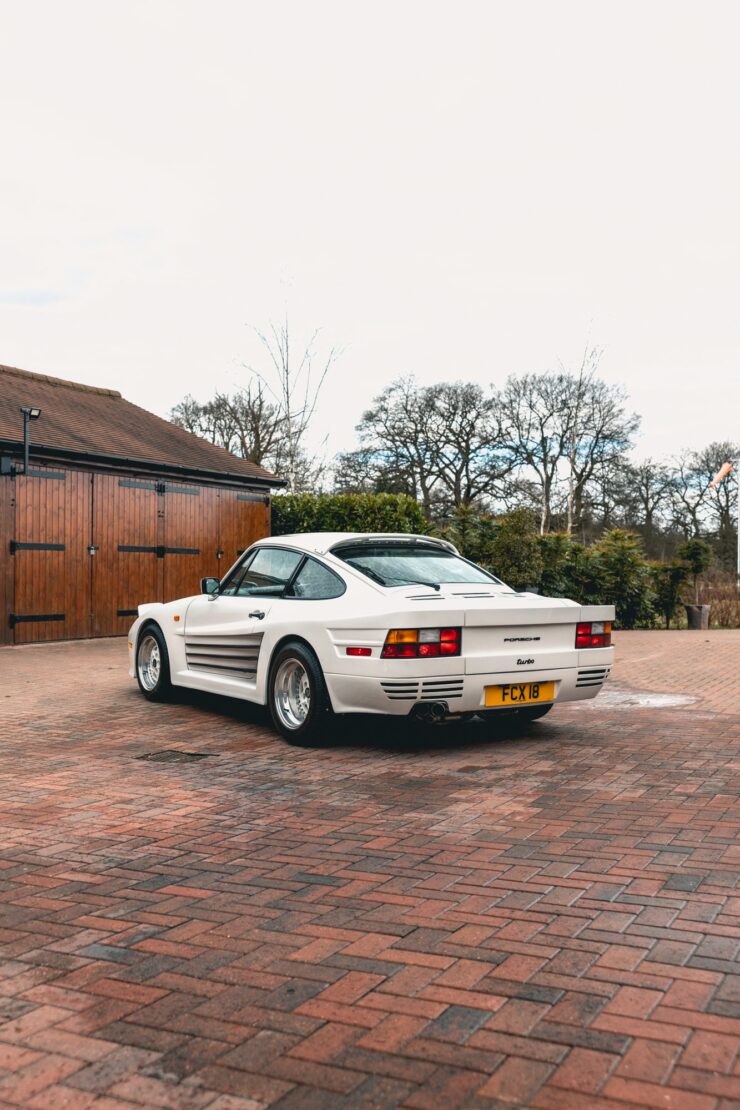