This is Silodrome’s first film and we’re really proud of it, please consider giving it a thumbs up on YouTube by clicking here, we’d also love it if you subscribed to the channel. We’ll be making more films in the coming months and if you’re a subscriber to the channel (it’s free of course) you’ll be the first to see them.

This film gives you an introduction to the 320 bhp Rennsport Porsche 911 ST, a 911 that has been completely rebuilt by Paul Cockell and his team in England. Rennsport are world leaders in the rapidly growing world of custom Porsche building, they’ve built and shipped cars all around the world.

This car was originally built for the 2020 Goodwood Revival, this event was cancelled due to Covid-19 and so sadly the car wasn’t seen (or heard) by the hundreds of thousands who regularly attend the event. The team at Rennsport started this build with a late Carrera 3.2 – one of the last 911s before the release of the 993 in 1994.

The Carrera 3.2 is prized as being one of the best 911s money can buy and it’s popular with those who build custom 911s due to the Porsche G50 gearbox that responds well to handling additional power. The car was stripped back to a bare shell, hand-shaped steel panels were then fitted to give the car its signature flared wheel arches capable of covering the Fuchs wheels – a 9 inch wide wheel is used up front with a 10 inch in the rear.

The engine was then rebuilt, it now has a capacity of 3.4 litres, high-compression pistons, and forged internals. A set of independent throttle bodies cap the engine and it has a fully programmable fuel injection system developed in-house at Rennsport with AT power throttles. 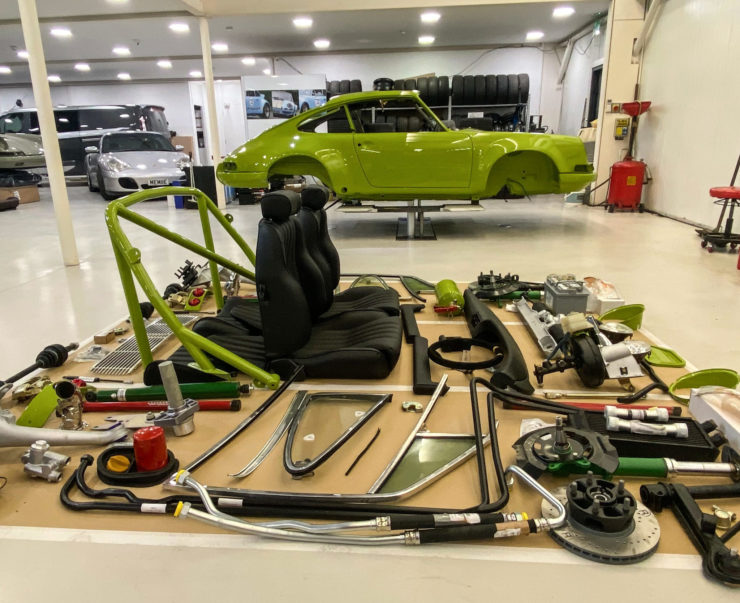 The interior of the car has been kept comfortable but minimal enough to make it well-suited to track use, it has all the gauges you’d expect as well as Muirhead leather upholstered Scheel sports seats, electronic air conditioning, a braced roll bar, and an alcantara-wrapped Momo steering wheel.

The above film gives a great overview of the car, Paul Cockell of Rennsport talks at length to Darryl Sleath about the car, Darryl then takes it for a spirited drive so you can see and hear it in action.

Darryl Sleath is the co-founder and editor of Motor Punk, he’s also a seasoned presenter and a long time friend of Silodrome. We’ll be doing more films with Darryl in the coming months (Covid permitting) so don’t forget to subscribe to Silodrome’s YouTube channel here.

Special thanks goes to Tony Gallagher for the use of the Sarsden Estate during filming.