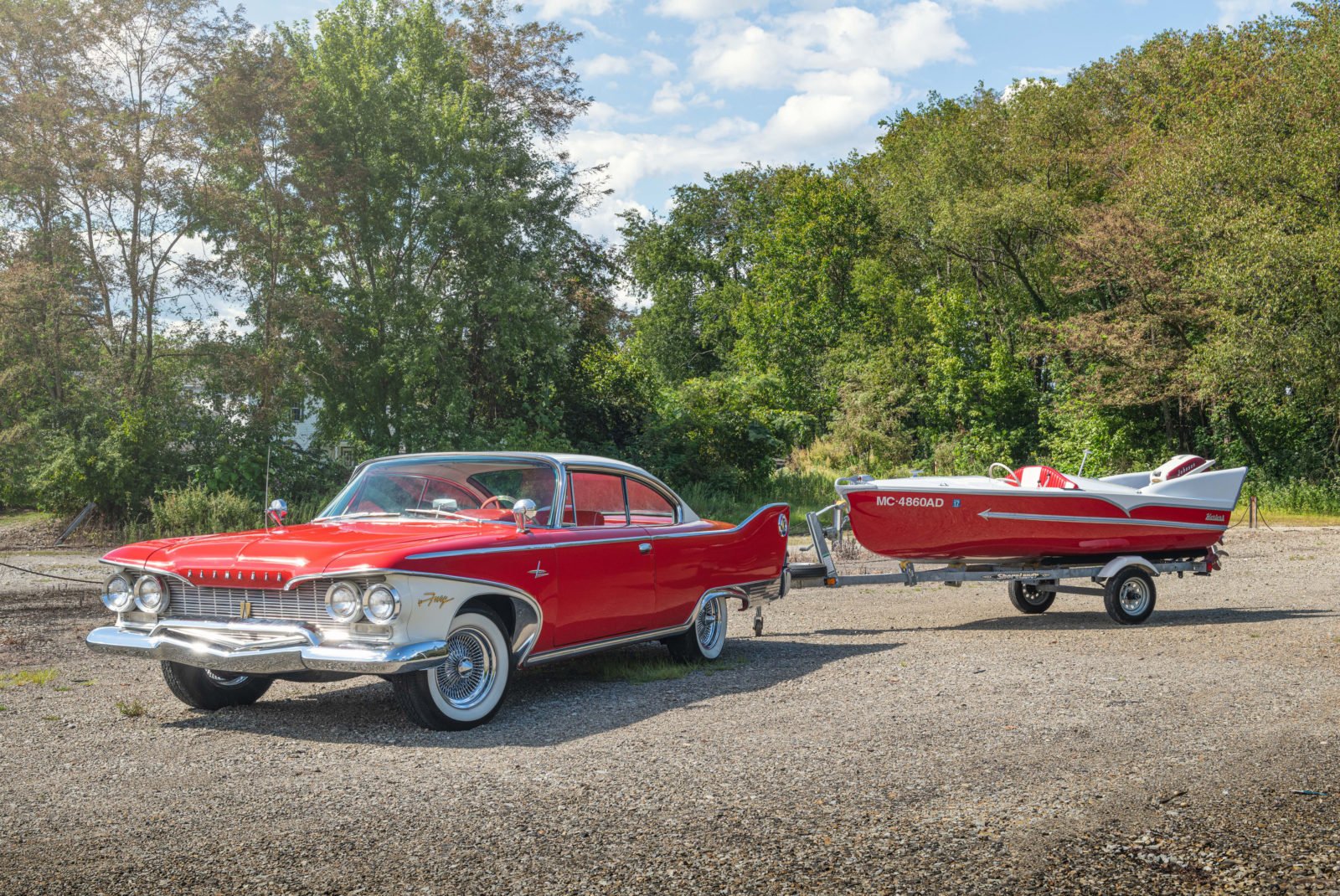 This is a 1960 Plymouth Fury fitted with the 310 hp “Sonoramic Commando” V8 engine that comes as a package with a color-matching Herters Duofoil Flying Fish Deluxe Boat powered by a period-correct 35 hp Johnson outboard engine.

The 1950s and 1960s saw an explosion in the popularity of powerful V8 coupes and leisure boats across the United States, as Americans enjoyed a booming economy – allowing plenty of money for luxuries and hobbies.

The Plymouth Fury is the car that set the path later followed by the Pontiac GTO, it was first released as a sub-series to the Plymouth Belvedere in 1956 before becoming a stand alone model one step above its Belvedere origins in 1959. 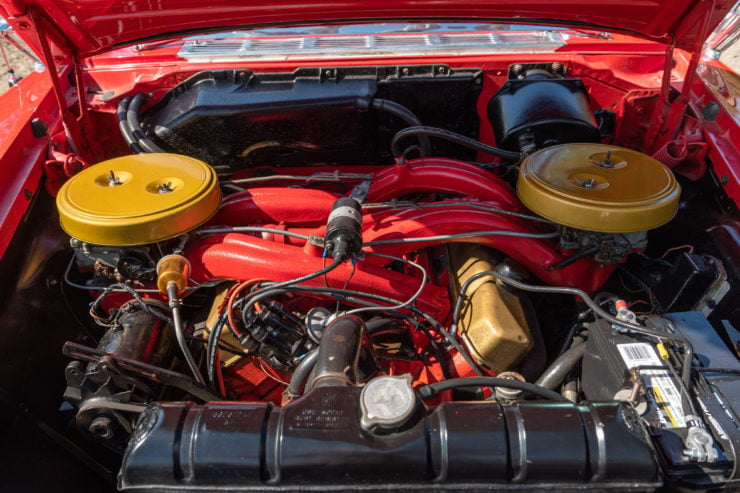 The GTO on the other hand had started out as an option package for the Pontiac LeMans in 1964 – a plan that had been dreamt up by John DeLorean. Following in the footsteps of the Fury, the GTO became its own standalone model in 1966, and rose to become far more famous than the car on which it was based.

The Plymouth Fury would never become as famous as the GTO, which seems unfair in a way, particularly when you remember just how genre-defining the Plymouth Fury “Sonoramic Commando” was when it was released, with its 310 hp V8 allowing it to beat almost anything in an impromptu traffic light drag race.

Once it became its own standalone model the Fury was offered in four-door and two-door hardtop variants as well as a two-door convertible and a Sport Suburban station wagon, though this last model wasn’t marketed as a Fury despite sharing its underpinnings – possibly to keep the performance appeal of the name. 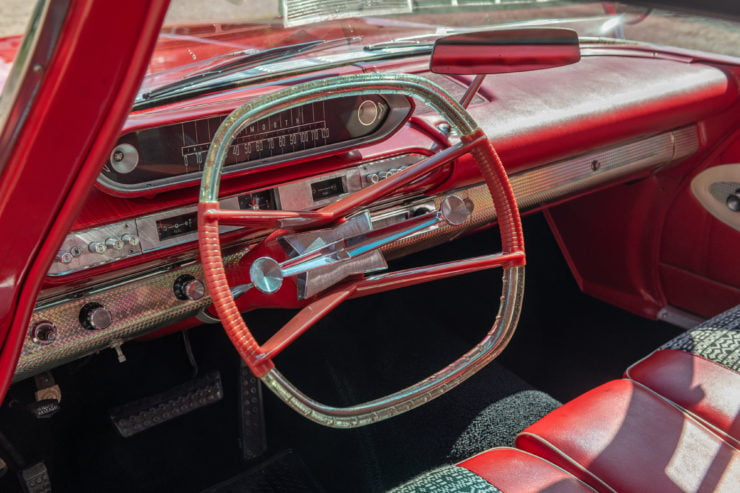 The interior of the car is classic 1950s Jet Age, power is sent to the rear wheels via a push-button three-speed automatic transmission.

In 1960 the second generation Plymouth Fury was released, it now used unibody construction rather than body-on-chassis construction as with the earlier cars. This made them more rigid but externally they still had all the fins and chrome you’d expect from an American luxury car of the era.

The standard engine for the Fury was the 225 cubic inch (3.69 liter) slant-six with 145 bhp, one of the higher-end offerings was the 310 hp 361 cubic inch (5.9 liter) “Sonoramic Commando” V8 with its dual-carbureted cross-ram intake manifold and dual exhaust system.

The third generation Fury would appear in 1962 with vastly different styling as a mid-sized car, the model would remain in production over eight generations until 1989.

For many Americans the 1950s were a time of unprecedented wealth, the middle class was becoming stronger by the year and their increasing disposable income led to a rapidly growing leisure industry. 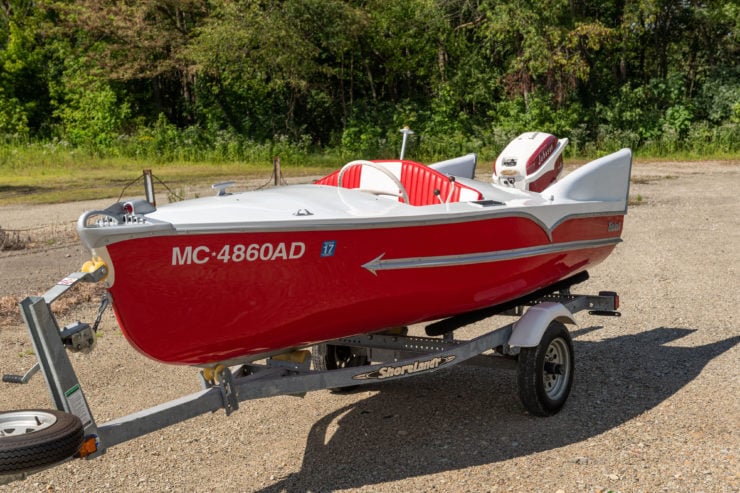 The beautifully designed Duofoil Flying Fish has fins to match the Fury.

The American automotive world of the 1950s was characterized by “Jet Age” styling, cars with chrome trim and fins inspired by both aircraft and the space race. One great example of is the Plymouth Fury coupe of the late 1950s, with its fastback roofline, hefty rear fins, and acres of chrome.

Boats hadn’t escaped the Jet Age stylist’s pen, many were designed with all the fins and chrome of their road-going counterparts, including the Herters Duofoil Flying Fish Deluxe Boat.

Herters was a catalogue-order sporting goods company that was popular in the USA at the time, they had been making fiberglass duck hunting boats for a while and so it made sense that they would pivot into building leisure boats as the market for them took off.

The example you see here is powered by a period-correct 35 hp Johnson outboard engine. During the restoration process that was completed back in the 1990s the boat was painted to match the car, they now look like they could have come from the factory together.

The pair are being offered as a single lot by RM Sotheby’s with no reserve price at the upcoming Hershey Lodge Auction due to be held on the 5th and 6th of October. If you’d like to read more about them or register to bid you can visit the listing here. 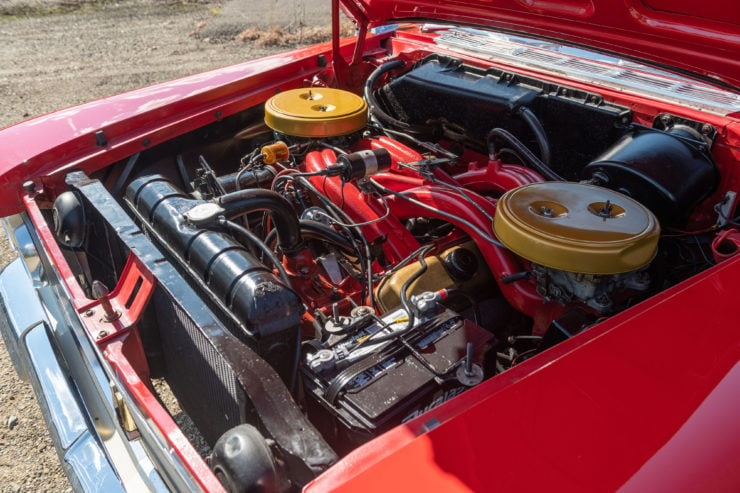 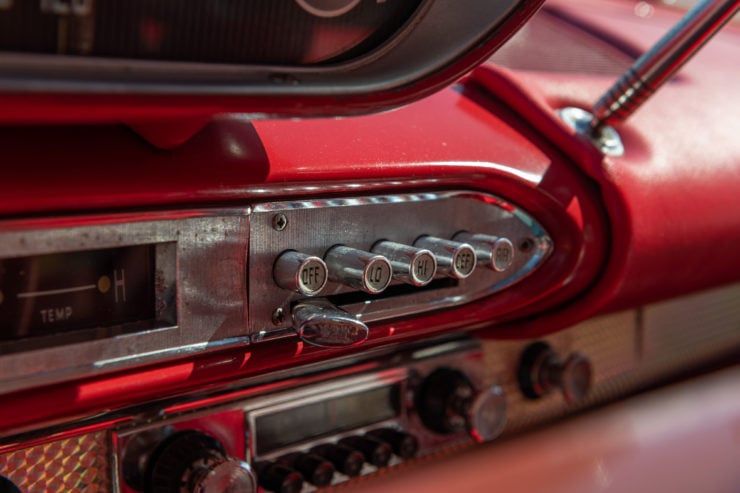 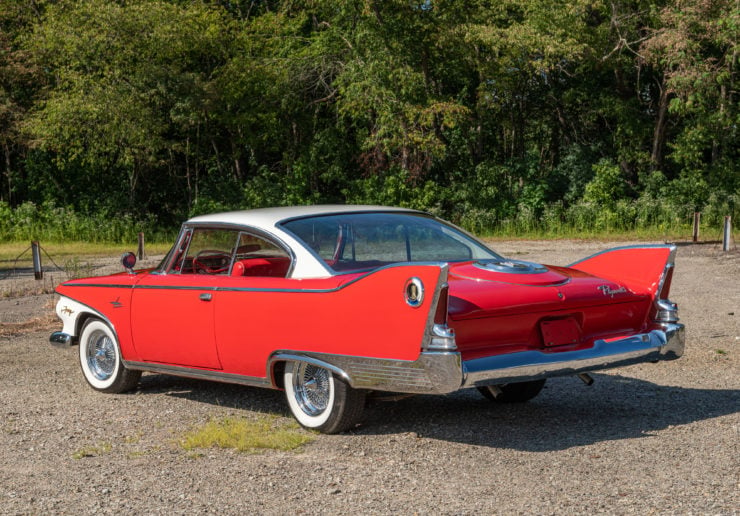 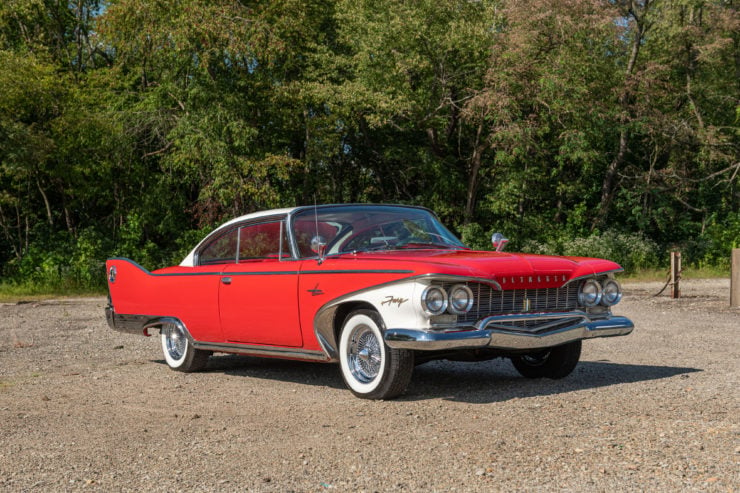 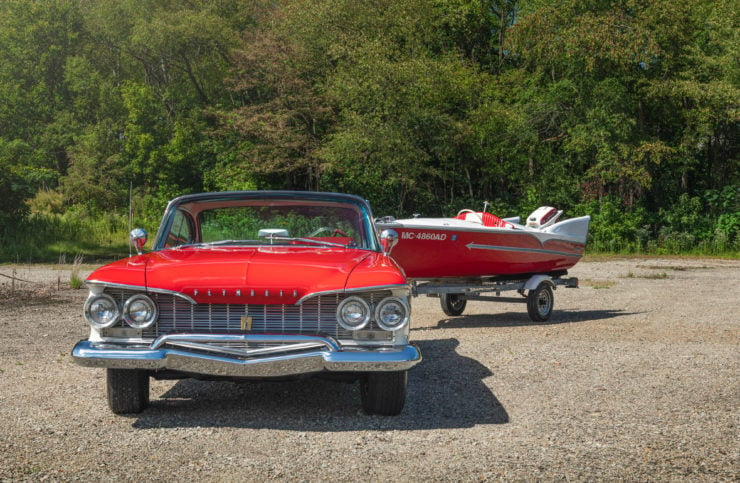 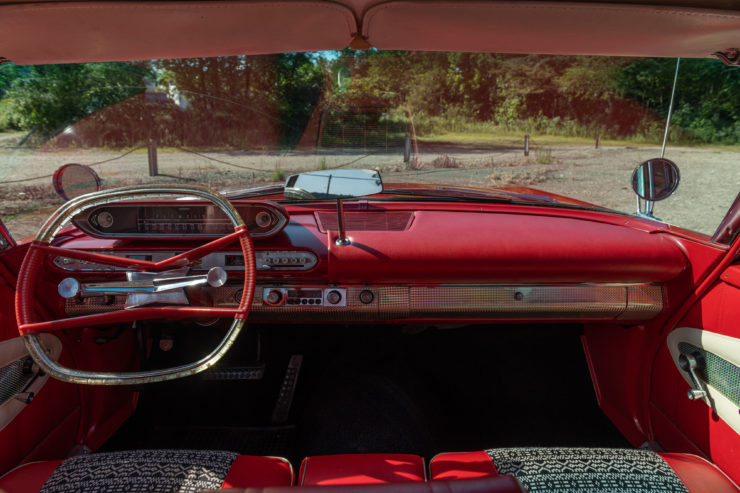 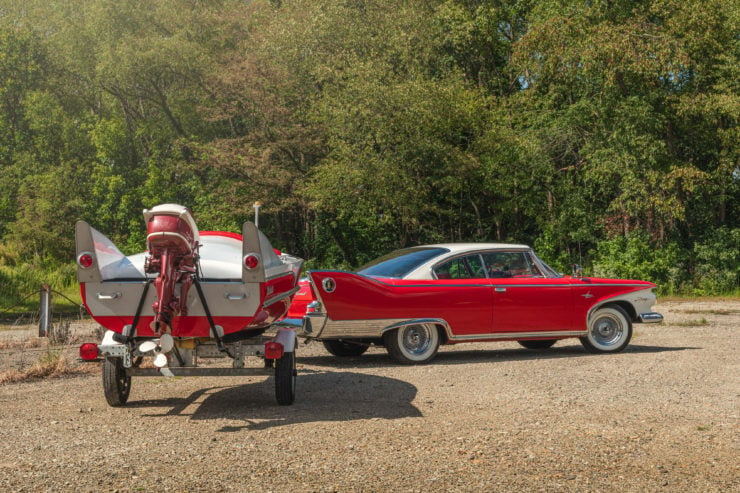 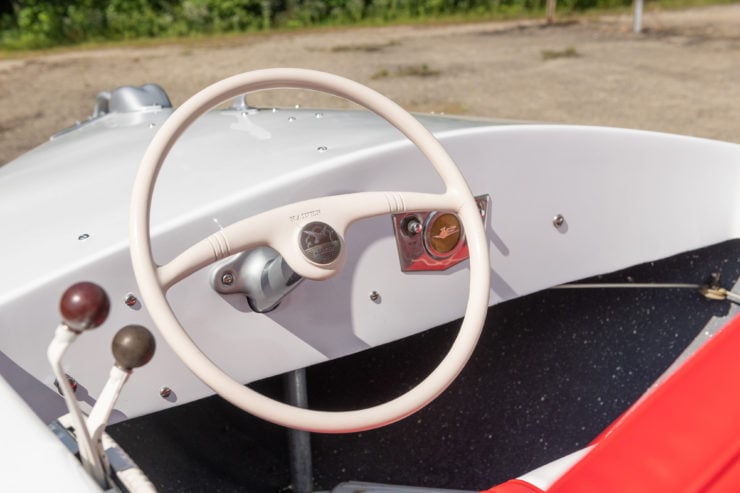 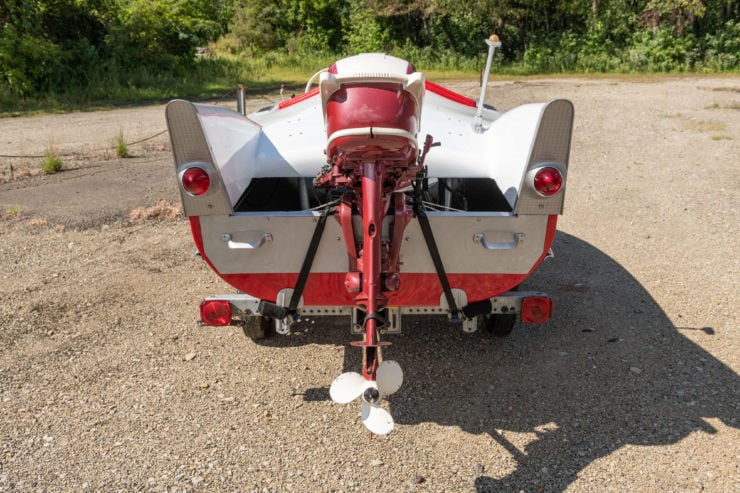 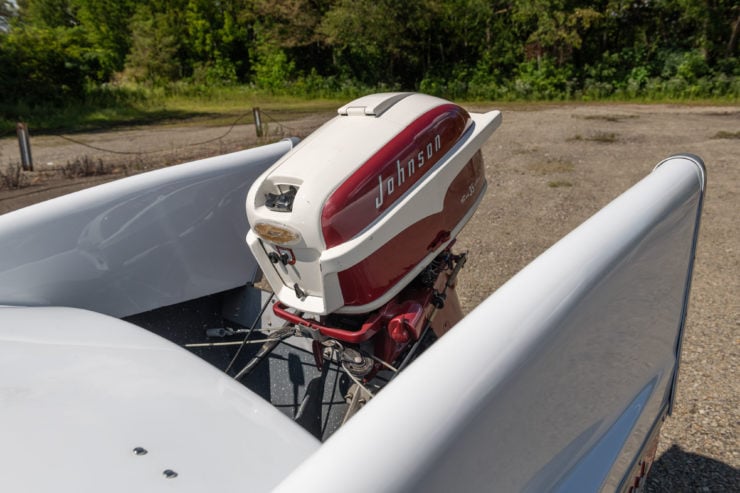 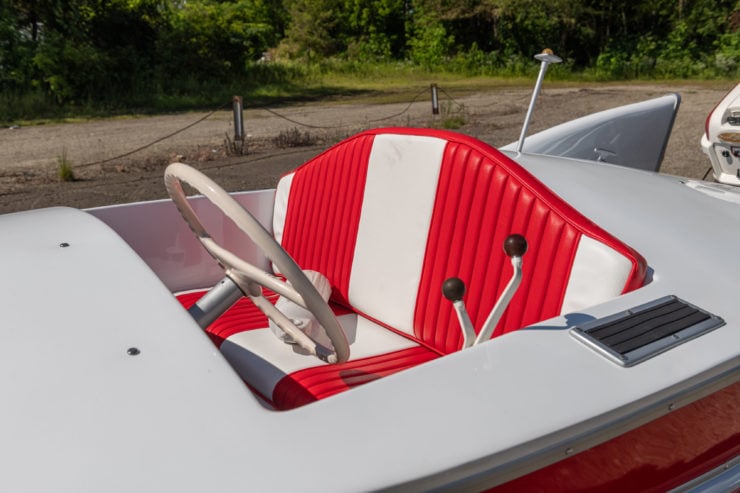 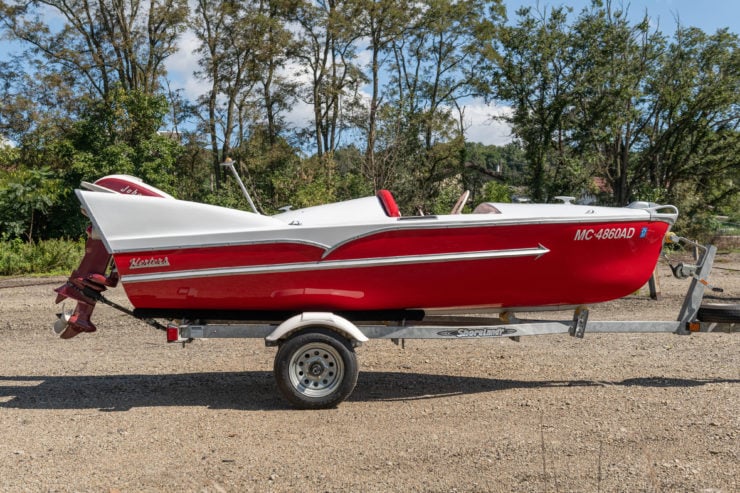