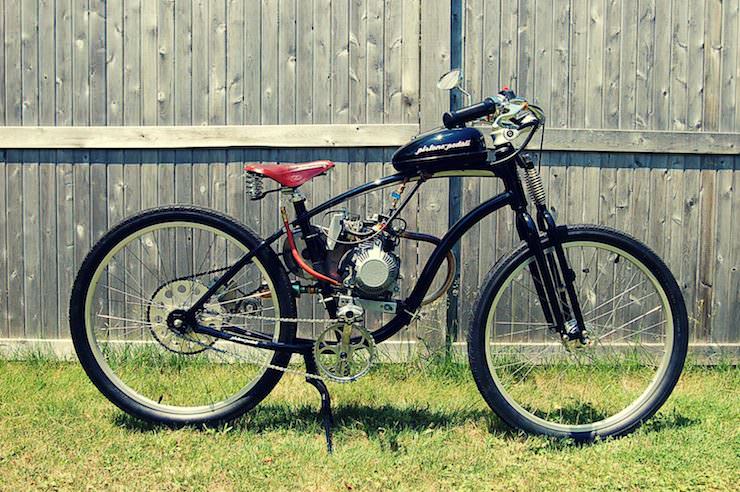 I have a huge soft spot for motorised bicycles like this one – dubbed the “Pistone-Pedali” by its creator Chris Rindos. When motorcycles first appeared they looked far more like this than anything we’d consider a motorcycle in the modern day – in fact the first motorcycles were just bicycles with engines attached, much like the hand-built, 49cc machine you see here.

Chris used to own a Suzuki GN400 when he was a little younger, his brother had a Yamaha SR500 and the two of them spent countless hours working on their bikes and dreaming of turning them into proper cafe racers. As often happens, life got in the way and eventually the bikes were sold on.

Some time passed and Chris’ throttle wrist began to get a little itchy – so he began hatching a plant to build something that he could use to commute to work. 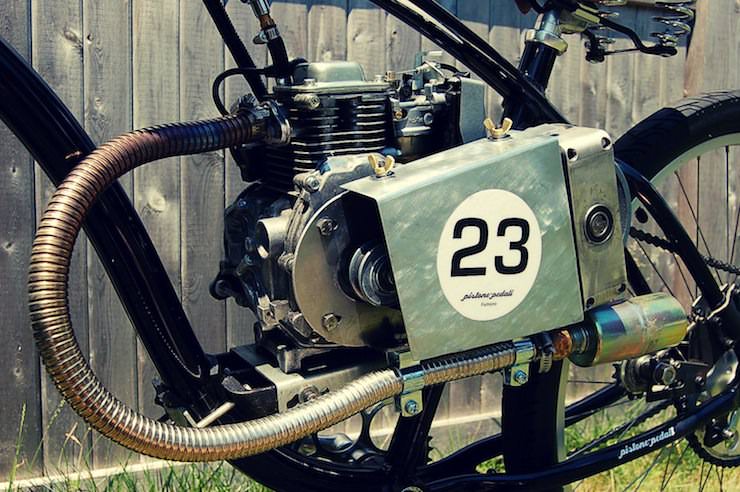 When he first saw the Giant “Simple Single” bicycle he knew he’d found his project chassis, he ordered a 26 inch model and set about acquiring an engine, transmission, fuel tank and new saddle. He opted for a 49cc Huasheng 142F four-stroke engine capable of 2.4hp, he then matched that to an EZ Motorbike Q-Matic single-speed gearbox with a centrifugal clutch, he then added a set of Felt Racing “Abraham Linkage” springer forks, a Sturmey Archer X-FD 70mm front drum brake, vintage replica “Jackhammer” throttle/grips, vintage replica quill pedals, a beautiful Brooks B67 sprung leather saddle, a drilled 56-tooth aluminum drive sprocket for #41 motorcycle chain and a four-litre fuel tank.

Chris then added custom lettering to the fuel tank, officially naming the bike “Pistone-Pedali” (it’s the Italian singular of “piston” and the plural for “pedals”), this tank was then clear coated to protect the vinyl decal from the elements.

When building the bike, Rindos planned to create a bike that looked for all the world like it was designed in 1903 – and I think the finished product looks exactly like the kind of thing you would have seen on the roads with penny-farthings and horse-drawn carriages.

The Pistone-Pedali is capable of a top speed of 41mph, though Chris says he usually sticks closer to 30 – he now uses the bike as his primary commuter and notes that it’s saved him a fortune as the bike has a MPG rating of 150+.

If you’d like to build something like this I’d recommend you shoot Chris an email – [email protected] – He’s a friendly guy who’s more than happy to chat with you and share advice, tips and tricks. If you do happen to build something cool, don’t forget to email us at Silodrome so we can show the world. 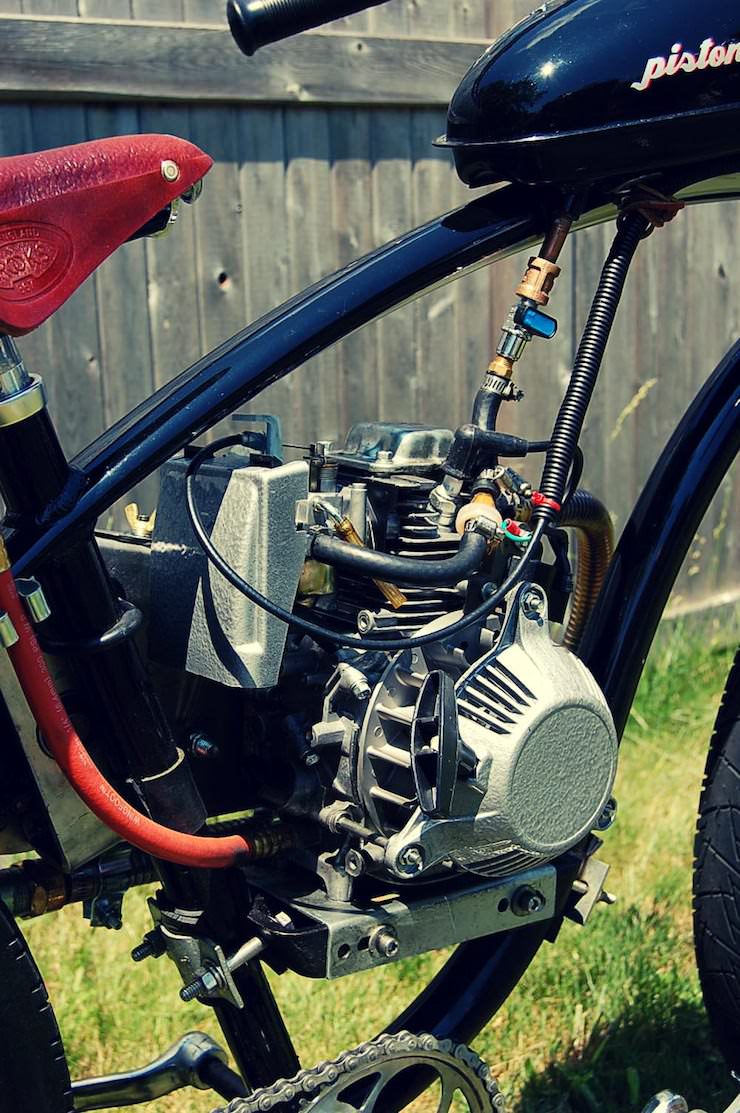 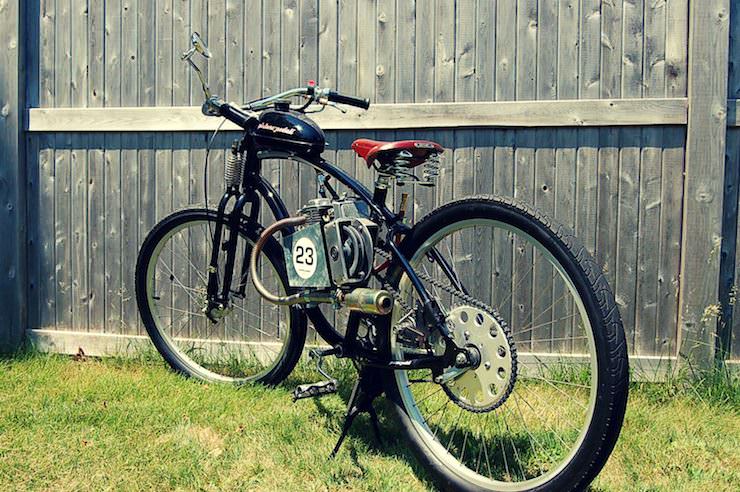 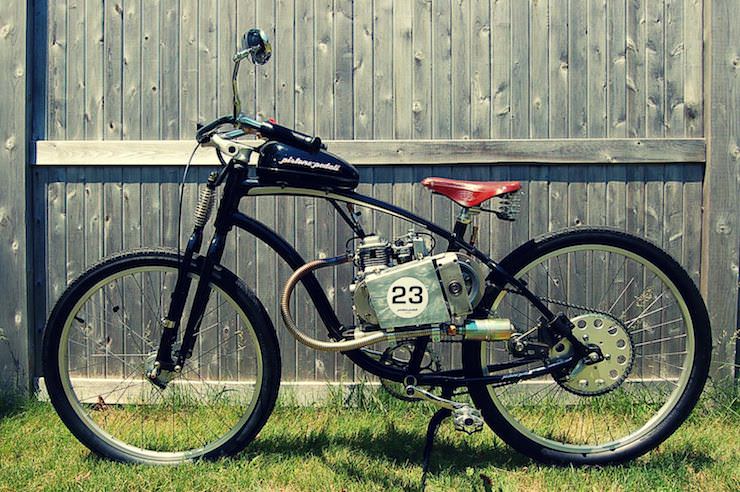 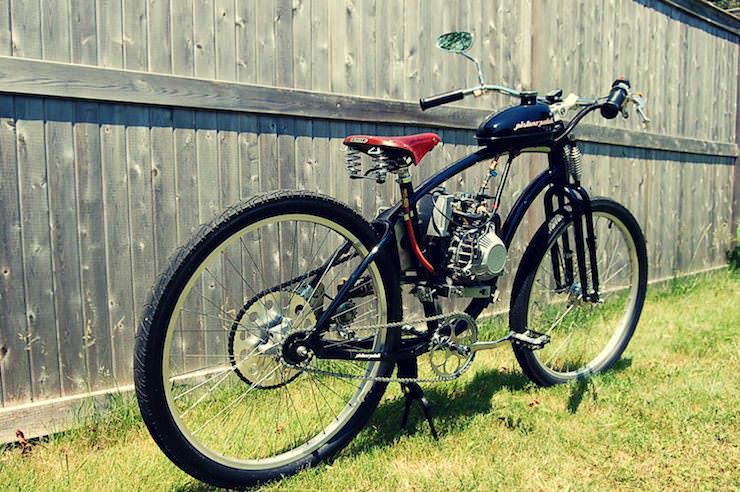 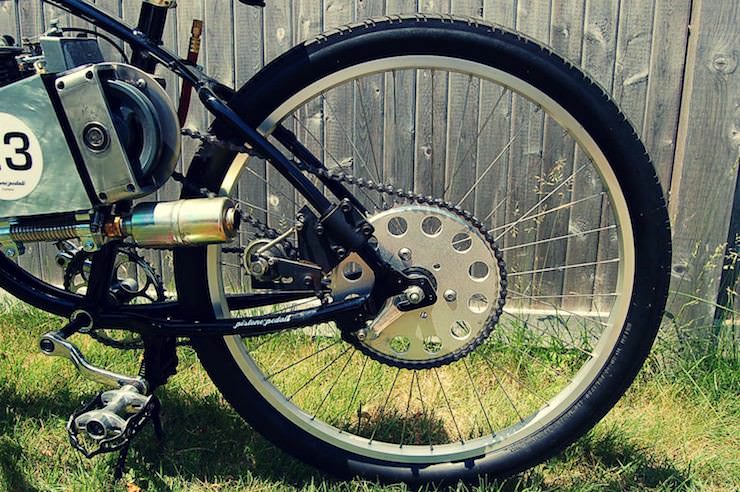 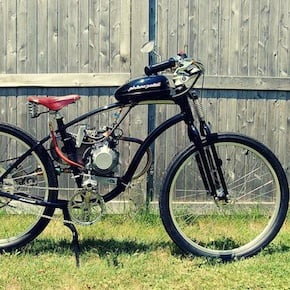