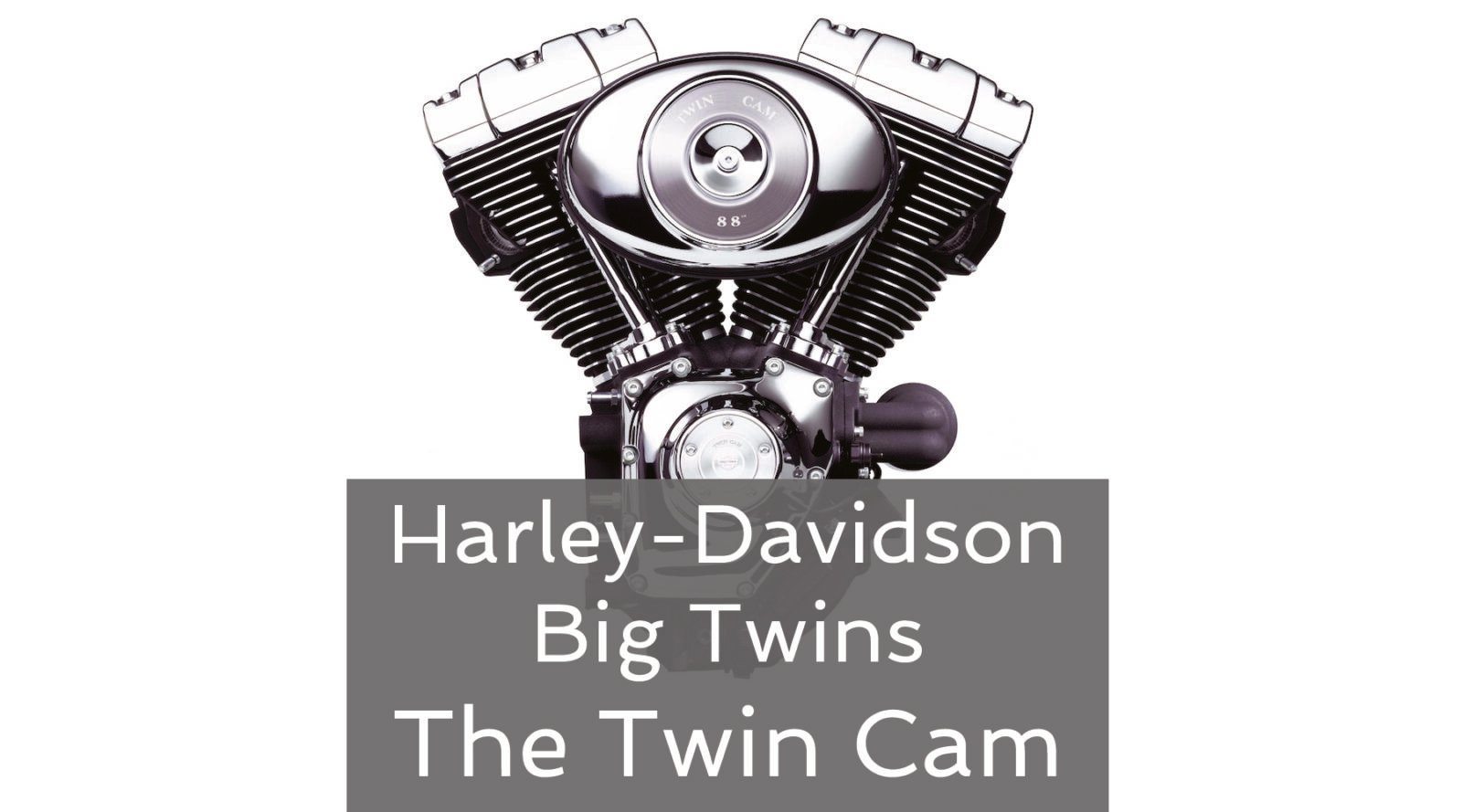 Harley-Davidson Twin Cam development began back in 1992, in the waning years of the twentieth century. By this time Harley-Davidson was a long way from the original efforts of Bill Harley and the Davidson brothers to build a motorised bike to make it easier to go fishing. That group of young men working in a small garage went through some rough times, a couple of World Wars with a depression in-between, but survived unlike many others. But as Bill Harley and the Davidsons, who were the original visionaries, passed on so the company became more and more a business with business priorities and business methods.

So the department heads met with the engineering department boffins and told them that more power was needed from the engines to sell more bikes. Engineering responded in typical engineering style by saying yes, no doubt thinking that this was a fun problem to solve and solve it they did. However the added power came with the inevitable cost, more heat. More heat meant the oil in the engine was getting too hot. The solution is simple, add an oil cooler, something that was probably needed anyway, but the styling department said NO in large and not so friendly letters. Styling is about the art of design and because it is art it is not always engineering friendly. The engineering solution for removing excess heat from an engine is simply to move to liquid cooling. A liquid like water is a whopping eight hundred and thirty times more dense than air and is significantly better at cooling an engine. The BMW K Series bikes for example were extracting lots of reliable power from their liquid cooled Peugeot 104 small car engine that they had laid on its side and dropped into a motorcycle frame rather successfully.

Engineering could have opted for a water cooled Harley-Davidson and that would have been an elegant solution to the problem. But the styling department said NO in large unfriendly letters again so it was a time for engineering to get busy with sharp pencils and sharp minds and create an air-cooled engine to provide more power with no oil leaks and no overheating problems. It would turn out at the end of the development of the new engine that a hybrid combination of air-cooling of the cylinders with a liquid-cooling system for the exhaust valve seats in the cylinder heads would be needed.

The new Twin Cam engine used a predominantly Evolution cylinder head but with the inlet and exhaust valves mounted in a fore and aft oval shaped “bathtub” hollow recess with the piston heads designed to optimise compression “squish” and gas flow. This design originated with Maserati and was used in their 250F Grand Prix racing car of the fifties. The effect of this design is to improve ignition and the burn of the fuel/air mix. An additional benefit is that it broadens the fuel octane tolerance of the engine. The cylinders of the new Twin Cam engine were made of aluminium to take advantage of its good heat transfer capabilities, with cast iron liners. A Harley-Davidson big twin was expected to be able to be pushed hard and long on interstate or intercontinental trips and so not only needed the power to accomplish this but the reliability, and it needed to minimise vibration to the rider so as not to cause vibration fatigue for a person who would be in the saddle for hours at a time.

Lightweight alloy pistons reduce vibration problems but a neat trick was needed to keep them cool hour after full power hour on the road. Harley-Davidson’s engineers used a method used on NASCAR engines, they installed piston-cooling oil jets. These oil jets squirt oil at the underside of the pistons to help keep them cool. The piston cooling jets were unfortunately not a complete solution and an increase in cylinder head cooling fin area was needed, or an oil cooler, or both. Between engineering department who wanted the best engineering result and styling department who wanted a very particular style result there was a bit of a tug of war for a while, but the end compromise was an increase in the cooling fin area of at least 50%, but no oil cooler.

The Harley-Davidson Twin Cam 88 engine was first introduced in the FL and Dyna production motorcycles but not the Softail model in 1999. The reason for not fitting the engine to the Softail was that it had relatively heavy pistons (for heat dissipation) that caused vibration. On the FL and Dyna the engine was rubber mounted to dampen that out but this was not possible to do on the slimmer Softail without creating a look that the styling department would not accept. The bottom end of the engine was a new design in which the tried and tested gear drive for the cams had been changed to a chain driven one. This change was done to eliminate gear noise but has proven to be a controversial one. Gears may produce some noise, especially as they wear, but they don’t typically catastrophically fail.

The chain drive for the camshafts used a spring loaded tensioner shoe that rides on the chain and applies pressure to it to keep the tension correct. Thus the tensioner is worn by the chain and needs regular replacement. This needs to be done every 20,000 miles. The expected maximum life of one of these spring loaded chain tensioners is up to 30,000 miles but, as failure of the tensioner will create a nasty engine damaging condition, replacement at 20,000 miles is common sense. This is something to consider when buying a used Harley-Davidson Twin Cam. A cam chain tensioner in a second hand bike is an unknown quantity and a typical bike inspection will not detect an upcoming problem. Harley-Davidson do sell a conversion to a hydraulic tensioner which is worth doing but does not eliminate the potential for a catastrophic failure if the tensioner is not changed according to Harley-Davidson’s schedule. The hydraulic tensioners delay the potential for failure but they don’t prevent it. After-market maker Roland Sands make a transparent “Clarity” cam plate timing cover so you can easily inspect the outer cam chain follower shoe (but not the inner). An alternative but more expensive solution is an after-market gear driven cam system although there are issues with successfully doing that also.

Because the Harley-Davidson Twin Cam engine is a result of a bit of a tug-o-war between the engineering and styling departments the set of compromises made can be cause for concerns. Cooling and vibration continued to be problems that needed solutions and cooling and vibration were interrelated problems that could have been solved by simply creating a well engineered liquid cooled V-twin. Because of this in the second year of production, 2000, the TC88-B engine was created with counter balancers. The counter balancing system produced a significant reduction in road vibration but was specifically designed so that the engine still produced that pavement thumping vibration at the handlebars when at idle. It is telling to quote Harley-Davidson’s Earl Werner who described the rationale for the counter balancing system this way; “Our market research shows that riders don’t want the tiring effects of vibration during a long day of riding, but like the look of the bars shaking as the engine idles at a stoplight.”

This statement gives us a bit of an insight into the agendas driving design and engineering. This was the engine installed in the Softail from 2000 onwards. In 2007 the Twin Cam was upgraded from the TC88-A and TC88-B to the new 96 cu. in. TC96-A and TC96-B (with the twin chain driven counter balance shafts). By mid 2008 the engine overheating problems that had persisted with the design and had not become less marked with the increase in engine capacity had to be addressed so Harley-Davidson introduced “Parade Mode” which would cut out the rear cylinder if the engine temperature rose above 288°F for three or more seconds. Normal twin cylinder operation was set to resume if the temperature dropped below 275°F. This feature was called RARCO (Rider-Activated Rear Cylinder Cut-Out) and was made available as a retro-fit modification. 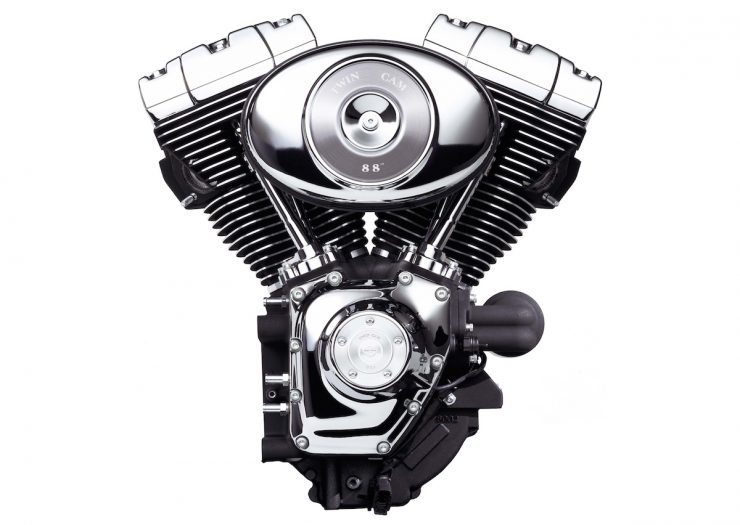 In 2010 Harley-Davidson introduced the 103 cu. in. version of the Twin Cam for its Electra Glide Ultra Limited and 2012 Softail. Also in 2012 Harley-Davidson made the largest version of the Twin Cam at 110 cu. in. for their Screamin’ Eagle/CVO bikes. As you would expect from reading this history as the engines got bigger and more powerful they simply created more heat and getting rid of that heat became more and more of an issue. Thus it was in 2013 Harley-Davidson came up with the hybrid solution called Project Rushmore – which sounds all American as if its referring to Mount Rushmore, however if the truth be known it is perhaps more likely engineering were trying to “rush more” cooling to those overheating Twin Cam engines. Project Rushmore was an upgrade project for Harley-Davidson touring bikes and the improvement involved fitting a Twin-cooling system providing liquid cooling to the exhaust valve seats. The liquid was conventional 50% water and 50% ethylene glycol as is used in automobile engines.

This was of course what should have been done back in 1999 but because of pressures that were not engineering driven it wasn’t. What price the Harley-Davidson Twin Cam? If you are considering buying one then we strongly suggest you do some homework and read some comments by owners and mechanics on Internet forums and, better still, get some good face to face advice. My own thoughts are that Harley-Davidson should perhaps have done more listening to the folks in engineering and paid less attention to the demands of the styling team. I suspect that engineering would have recommended basing their new engine on the quad cam Evolution engine used in the Sportster and making it liquid cooled. That would have looked a bit different, but it would have been a twenty first century engine with an engineering legacy that stemmed from Bill Harley himself. Its hard to improve on perfection. 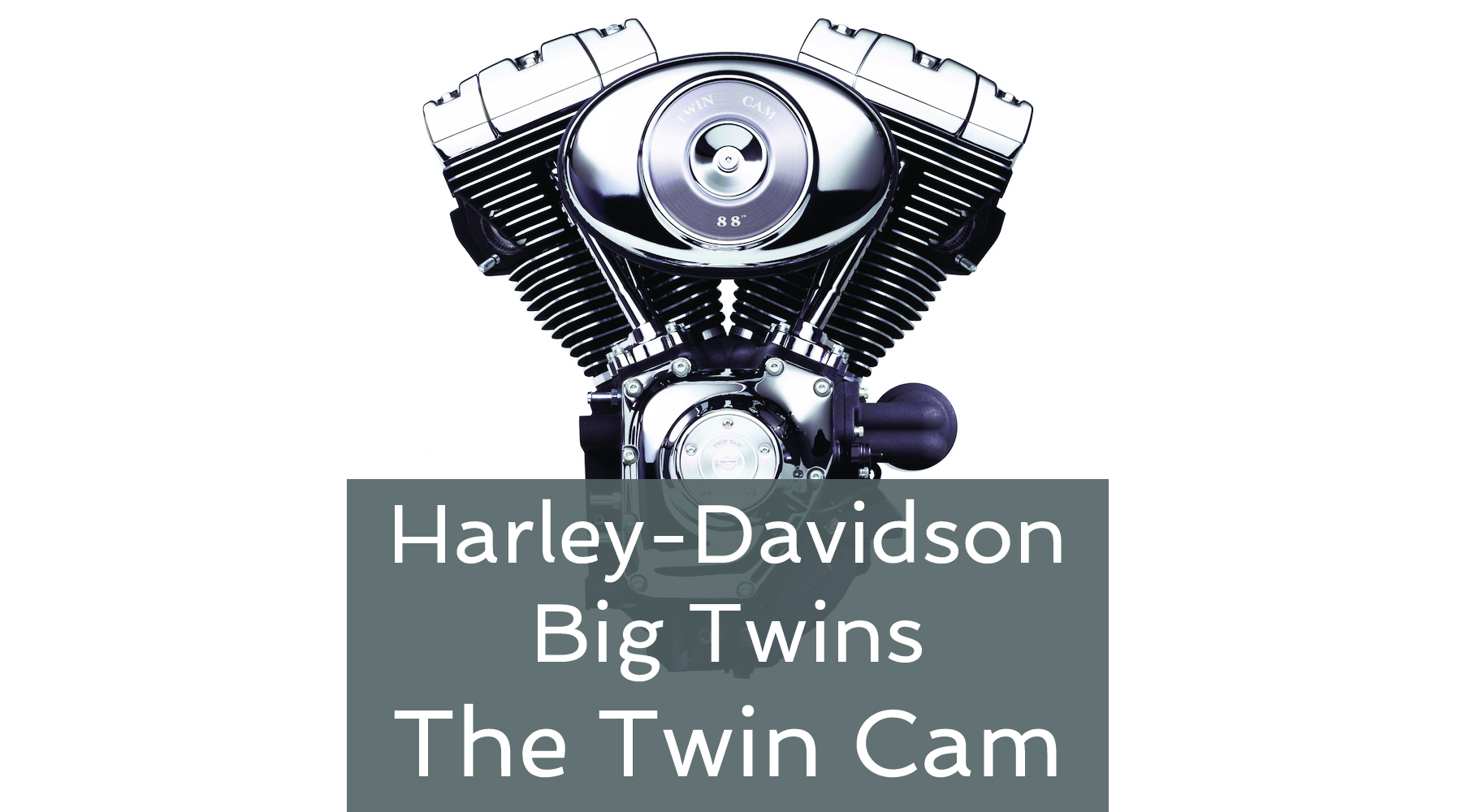