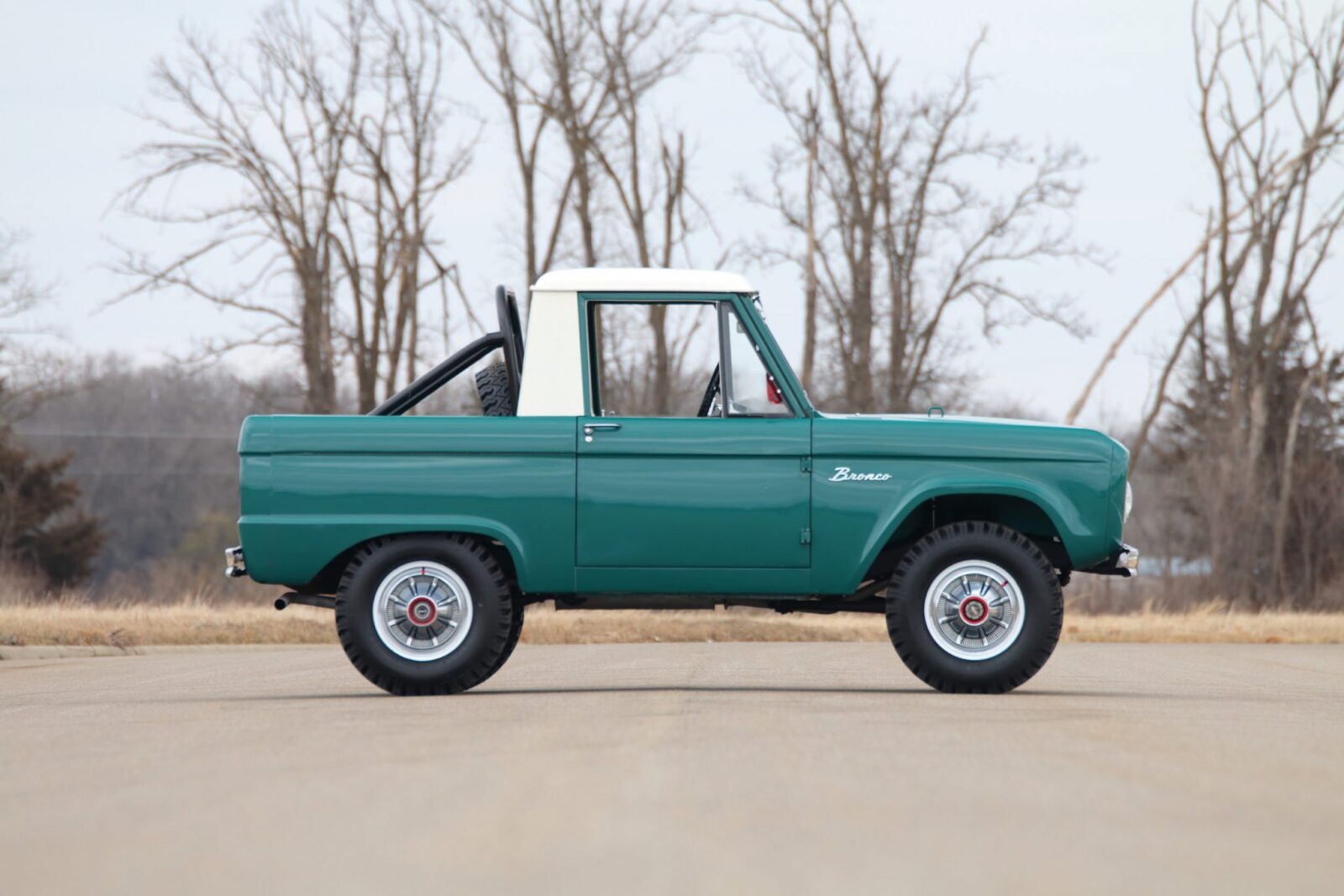 The Ford Bronco Half Cab was a rare version off the iconic 4×4, just 2,317 were built in 1969, as the overwhelming majority of buyers opted for the slightly more practical wagon body style. Officially called the Bronco Sport Utility Pickup, the motoring public quickly nicknamed it the “Half Cab”, and today this is the name that’s almost universally used.

The Story of the First Generation Ford Bronco

The story of the Ford Bronco begins with the same Ford executives who began the other “Pony Cars”, Donald N. Frey who was the Product Manager, and Vice President Lee Iacocca. They saw the success that the International Harvester Scout was enjoying and in that success saw an opportunity for Ford to create a potentially better car that would compete not only with the Scout, but also with offerings from Willys Jeep, and the British Land Rover. The International Harvester Scout had broken the mold as to what a four wheel drive vehicle was thought to be: it had introduced quite civilized levels of passenger comfort, without sacrificing the ruggedness and go anywhere abilities of the Jeep. Ford were cautious as to whether or not such a vehicle as a comfortable four wheel drive would sell, but they committed to creating a vehicle that would be superior to the Scout, and they hoped superior to everything else in that marketplace.

Responsibility for the actual design work was handed over to a design and engineering team headed by Paul G. Axelrad. The brief was to base the vehicle around parts that were already being used in Ford’s regular production as much as possible. The chassis was to be a box section ladder frame, the axles were taken from the F100, and the engine chosen was the 170 cu. in. in-line six cylinder gasoline unit as used in the Ford Falcon and Econoline range of light trucks. The gearbox chosen was a generic Ford three speed all synchromesh one which was mated to a Dana 20 transfer case. The front differential chosen was a Dana 30 with manual lock-hubs. Like the vast majority of American cars of the 1960’s the gearshift was mounted on the column. 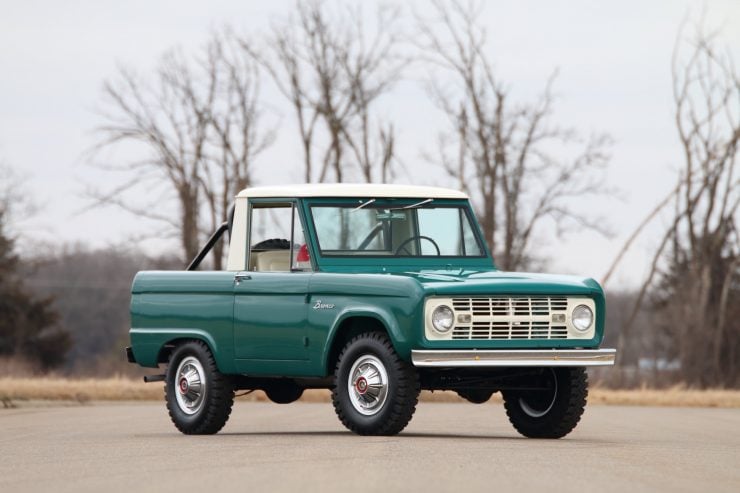 The suspension of the Bronco was a conventional Hotchkiss type live axle with leaf springs, but for the front suspension Ford decided to up the ante and use a more sophisticated coil spring system which they dubbed the “Cushion Beam”. This system gave the Bronco superior handling and a tighter turning circle of 34 feet. the body panels were made to be aesthetic, but simple, and the glass used in the first generation Bronco was flat to make not only manufacture, but also repair easier.

The Bronco was made in three models, a roadster, half cab pickup, and station wagon. Of the three offerings the wagon vastly outsold the others revealing to Ford the nature of the market the Bronco appealed to. Armed with this information Ford understood that the wagon should be the version to promote. Early in production the promotion strategy was for Bill Stroppe to assemble a team to tackle the Mint 400, Baja 500 and the Mexican 1000 (later re-named the Baja 1000). In 1969 for example the Bill Stroppe team entered six Broncos in the Baja 1000. The Broncos made a name for themselves to the extent that in 1971 Ford introduced the “Baja Bronco” option package as a regular production offering. The Baja Bronco option package included some needed technical improvements such as quick-ratio power steering, a roll bar, automatic transmission, reinforced bumpers and flared fenders to accommodate the Gates Commando tires. The Baja Bronco was also given a distinctive red, white, blue and black paint scheme.

In the first generation Bronco’s future would be a variety of improvements that would include V8 engines and other technical upgrades such as the change from the old style vacuum wipers, which would slow down whenever you pressed the accelerator, to more consistent and reliable electric ones. The first generation Bronco would remain in production until 1977.

Although the Bronco is no longer with us at the present time Ford has announced a new model for 2020, so it will be interesting to see if it is a return to the more simple style of the first generation Bronco, which so many are hoping to see.

The Bronco shown here is one of those rare original Half Cabs, it’s fitted with its original 170 cubic inch straight-6 and 3-speed all-synchromesh transmission, and it comes with its original sales invoice and owner’s manual, along with a dealer-installed rollbar for added safety.

Drivers can choose between 2×4 or 4×4 driver modes, it recently had the engine refreshed with new gaskets and a new reproduction radiator, it also had a repaint in its original Holly Green color, with the top and grille in their original white.

If you’d like to read more about the Half Cab Bronco or register to bid you can click here to visit its listing on Mecum. 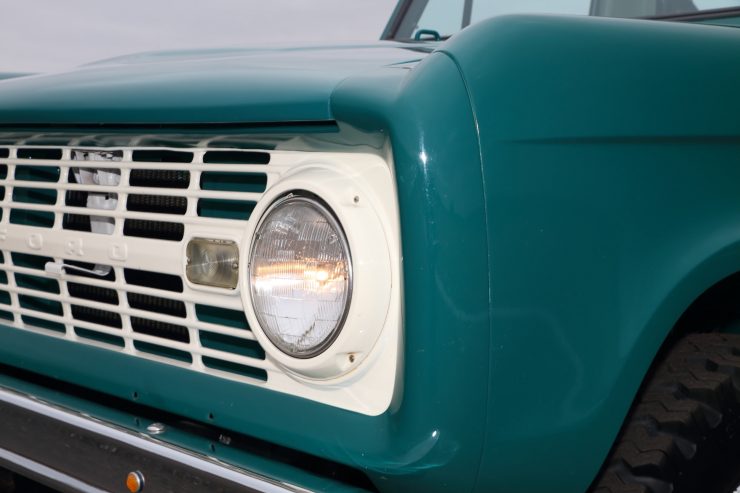 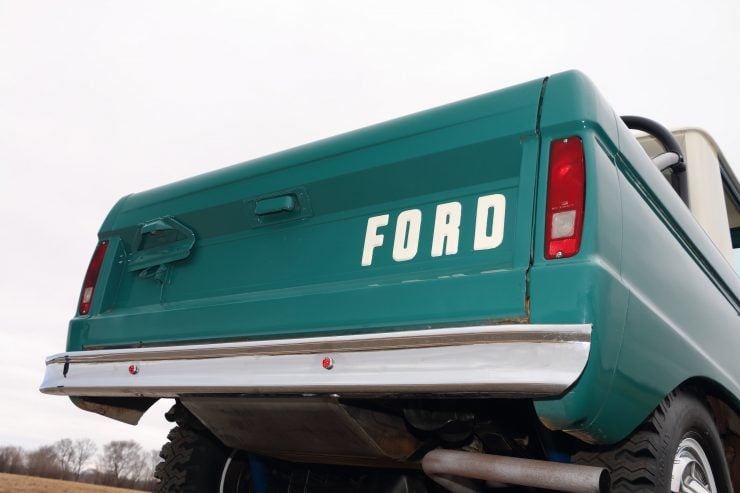 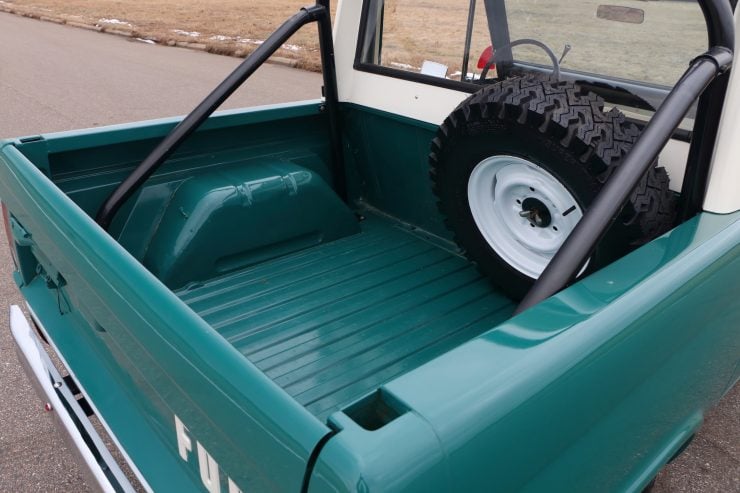 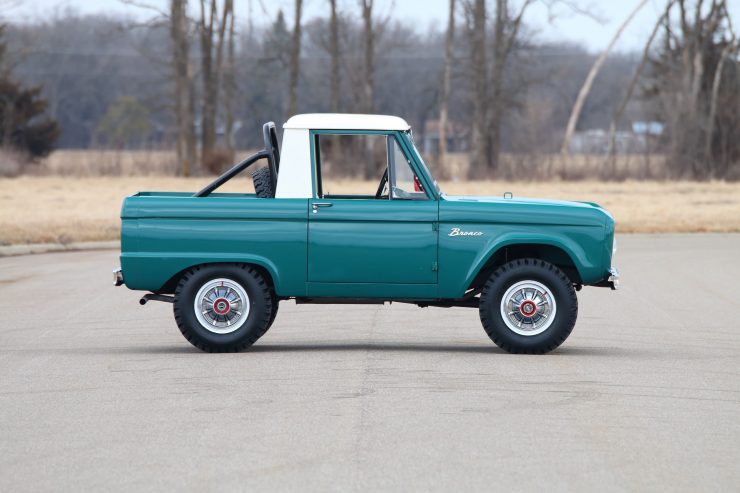 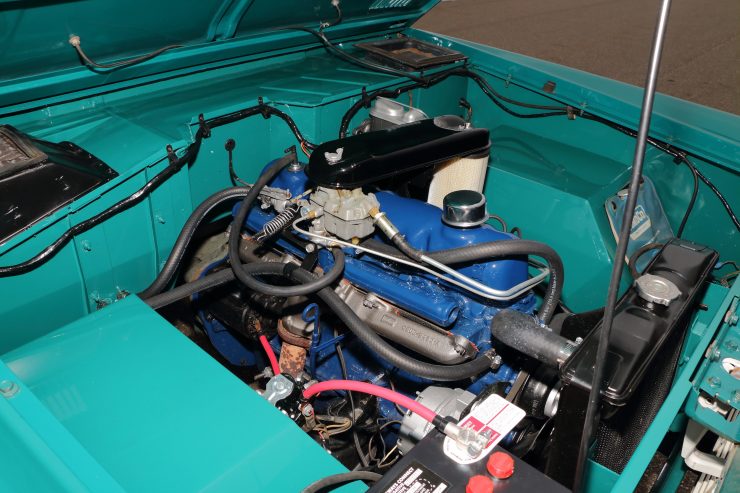 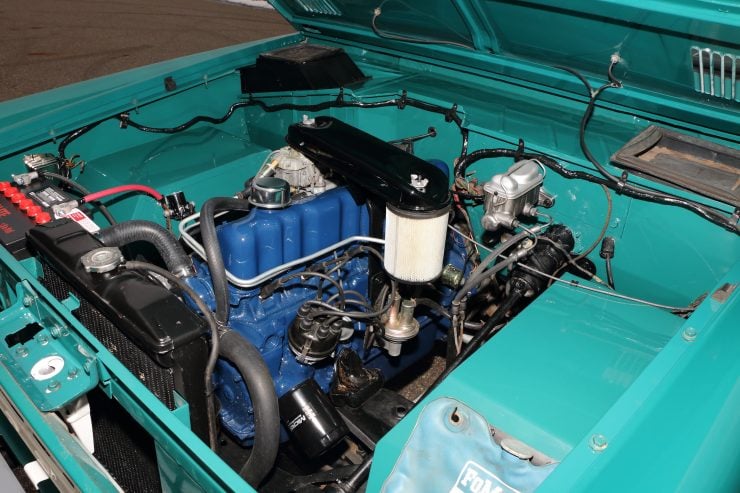 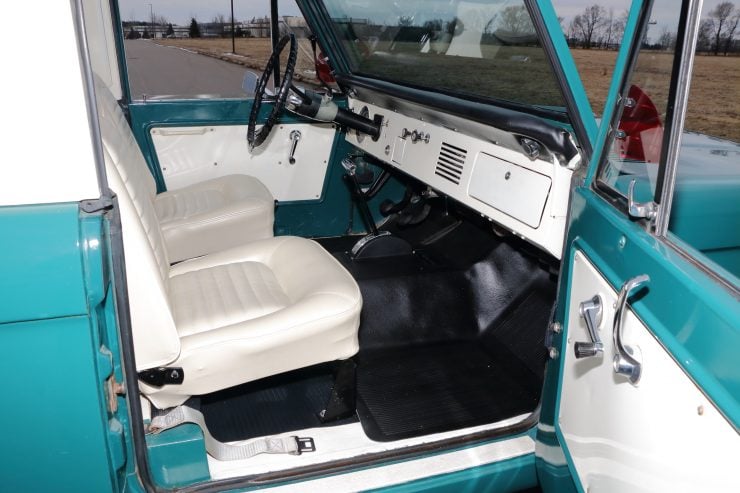 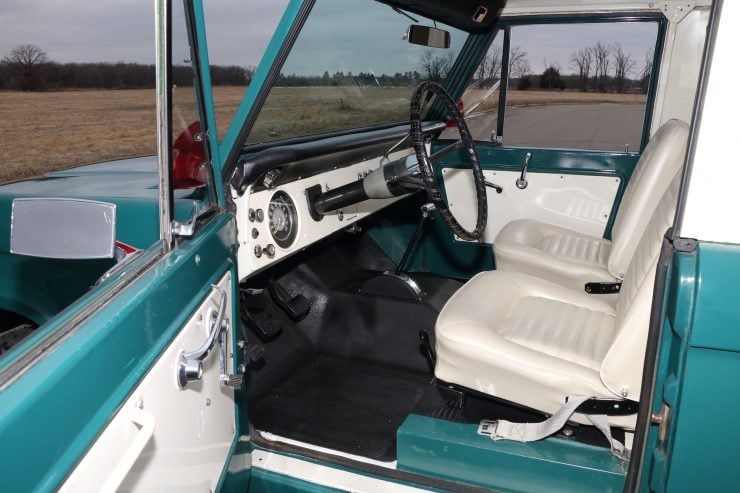 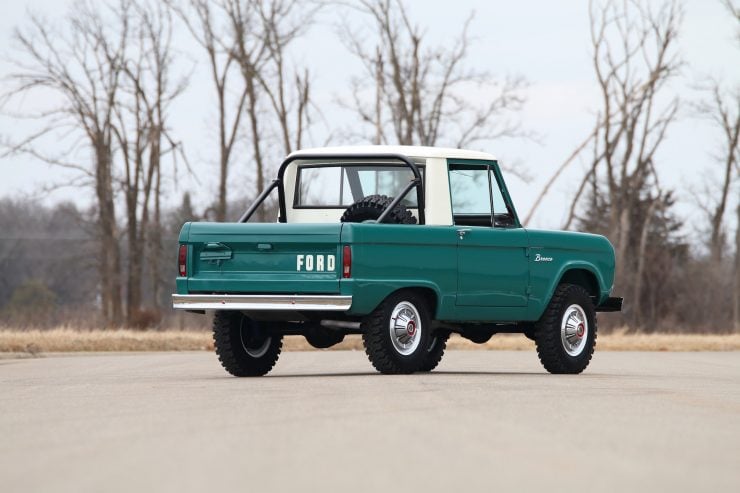 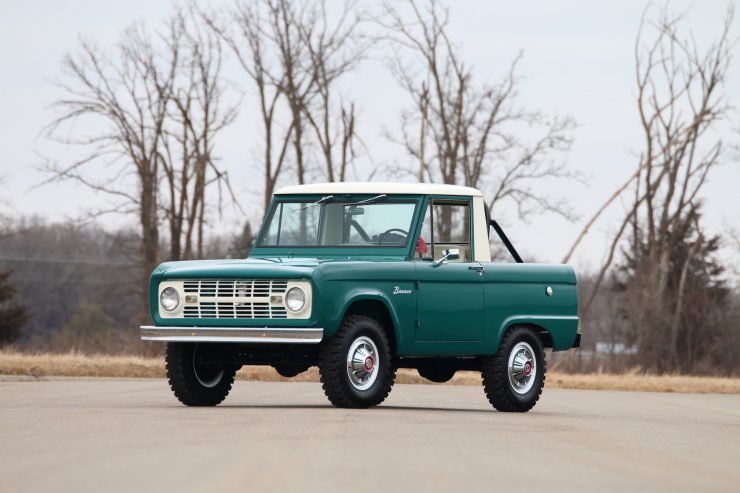 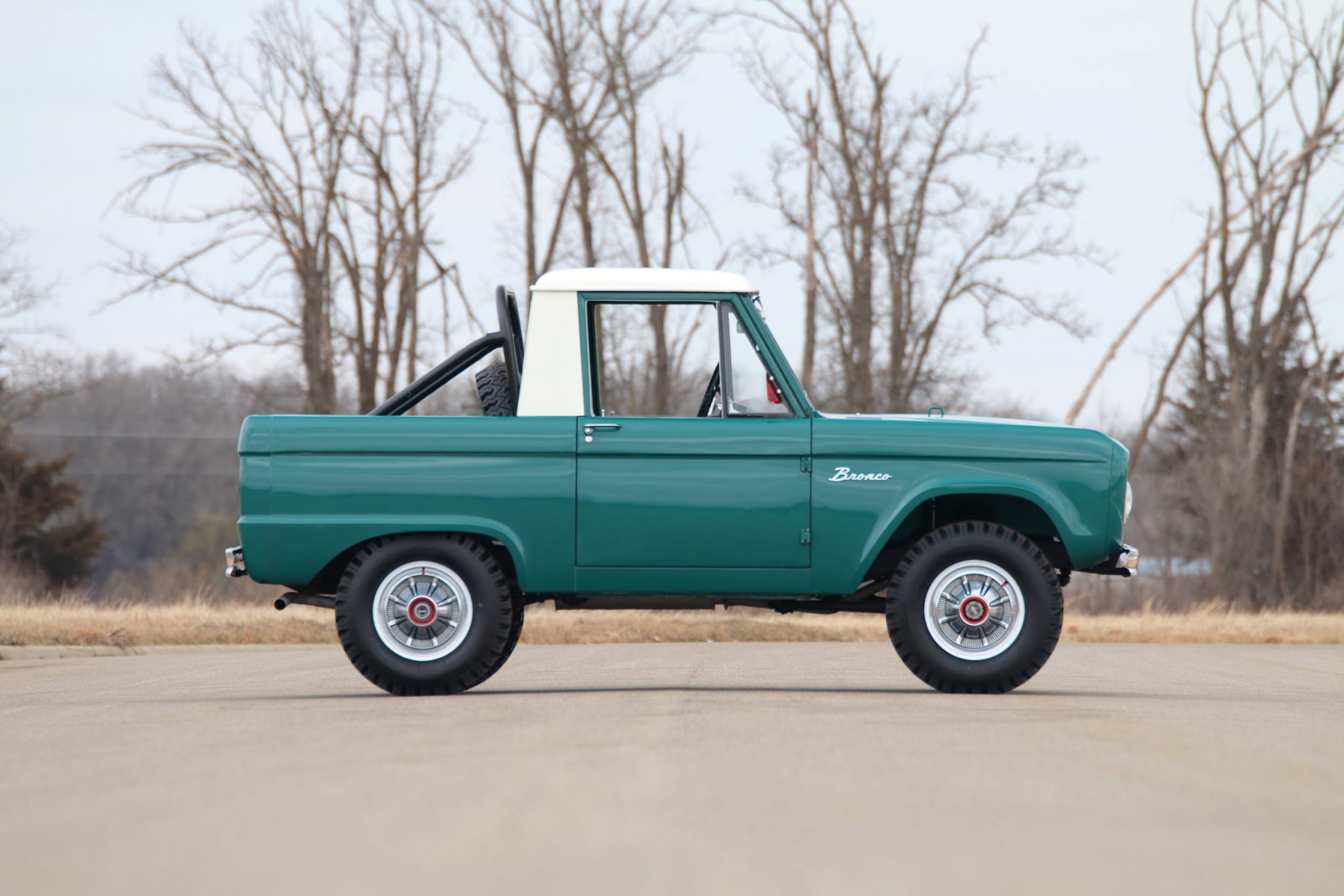