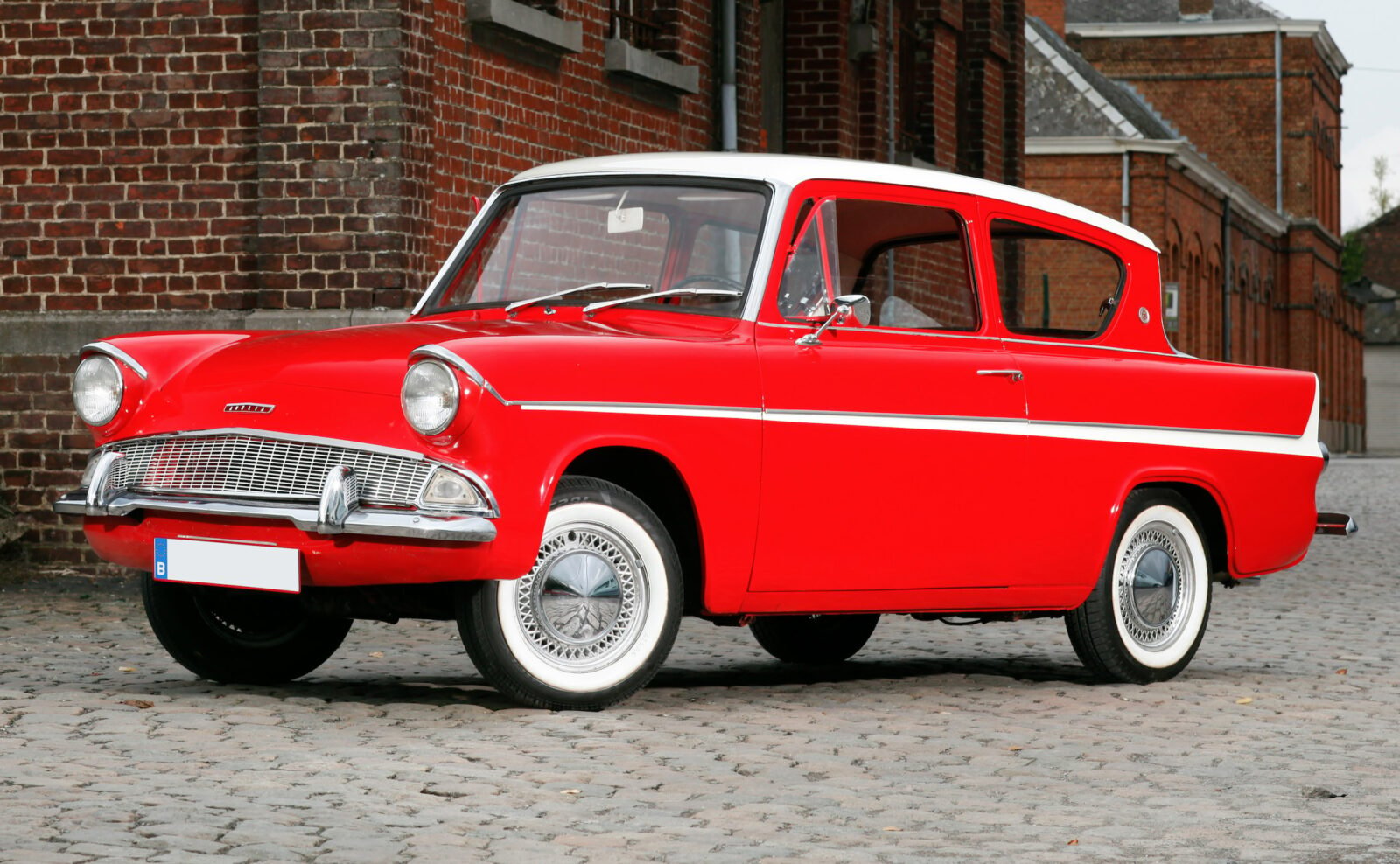 The Ford Anglia is one of few 1960s-era classic cars that’s immediately recognizable to many millennial thanks to the model’s inclusion in the Harry Potter series of books, and its on-screen appearance in Harry Potter and the Chamber of Secrets.

This version of the Anglia, the 105E, is by far the most famous of the Anglia models which were first introduced by Ford UK in 1939. The car you see here is part of the fourth generation of Anglias, and in 1967 it would be succeeded by one of Ford UK’s most famous creations: the Ford Escort.

This generation of the Anglia is separated into two main versions, the 105E and the 123E fitted with 1.0 liter and 1.2 liter Kent engines respectively. Some have called this car the “Mini Ford Thunderbird” due to its styling, and today it remains one of the most affordable British classics of the era.

When Ford’s design team began work on the Anglia, the key idea was to produce a small, light car – weighing less than 800 kg – for the British market with features derived from American luxury models.

In stark contrast to the rounded lines of its 1953 namesake, the 100E, the Anglia 105E/106E appeared in 1959 with a very wide grille incorporating indicators (deLuxe version), prominent round headlamps, prominent rear wings – albeit less imposing than on the larger Atlantic saloons – and an inverted rear window. 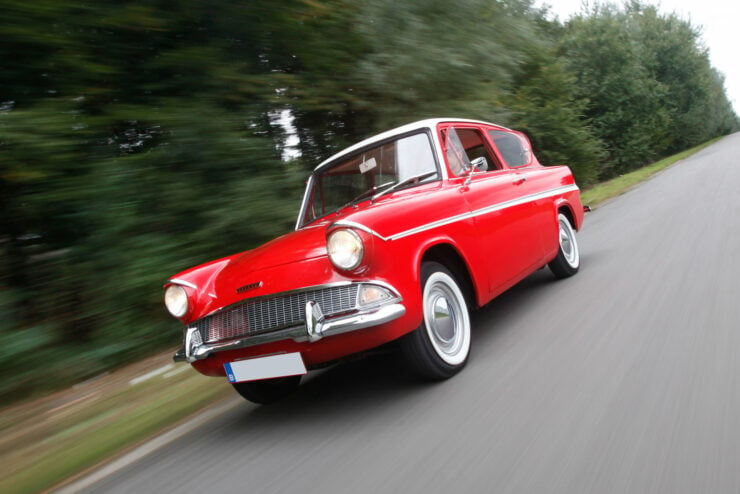 The Ford Anglia has been called the “Mini Thunderbird” due to its classic 1950s-era Ford styling cues.

The latter was reminiscent of the design of the Balboa X prototype unveiled by Packard in 1953. Ford used this design for the Mercury D528 (1955) and the Lincoln Continental (1958). Later, the Ford Consul and also, among others, the Citroën Ami 6 with its legendary Z-shape, were based on this concept. The Anglia is equipped with a 997cc super-square, inline four-cylinder engine with 37.5 bhp at 5,000 rpm, which was used as the basis for some sports and competition cars.

The made-in-the-USA styling of the time is even more evident on the Sportsman deLuxe version of the Anglia, which was built in Ford’s Antwerp factory for Belgian customers. The spare wheel was mounted on the outside of the rear bumper in a style not dissimilar to the 1956 Ford Thunderbird, allowing al of the trunk space to be used for luggage.

The proposed example is in this version. It was seen in the TV show “Des Racines et des Ailes” on France 3 and took part in the Route Nationale 7 Historique Rally in Brittany in 2016. It was also awarded first prize at the Concours d’Elegance in Charleroi in 2019. Put on the road in 1965, this Anglia is located in Belgium, where the collector’s registration certificate is issued in the name of the seller.

The seller acquired the car in November 2013 and is the third owner. The odometer shows 53,000 km, which the seller says is reliable and has been driven about 10,000 km. A full record of work carried out since 2013 and the manufacturer’s manuals are provided. The vehicle has been parked in a closed garage, has not undergone a technical inspection and is neither pledged nor covered by a warranty.

If you’d like to read more about this unusual Ford Anglia Sportsman you can click here to visit the listing on leBolide, bidding is underway now. 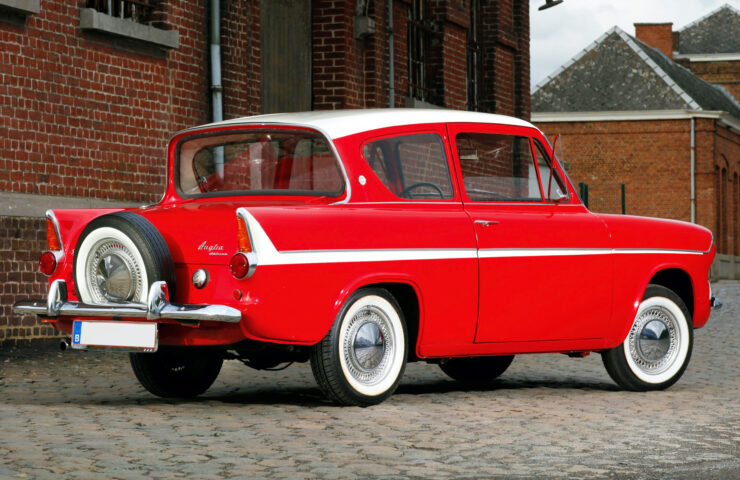 The rear fins and inwardly angled rear window are all classic design touches from the era – the rear window was apparently designed like this to keep it clear of rain.

The red and white colours are original but some paintwork has been carried out. Since the purchase of the car in 2013, the bodywork has not been serviced. The seller reports no corrosion or damage, apart from a small scratch on the edge of the right front wing. A square fog lamp has been installed at the left rear to bring the car into compliance with Belgian legislation. The 13-inch wheels are original, as are the wheel covers.

The chromed fake spokes visible in some pictures are currently not fitted but are supplied. The tyres are Vredestein 155/60 R13 with white thermoformed sidewalls, the remaining profile of which is about 80%. An identical spare wheel with a new tyre is fitted in the boot (the original model did not have one) and is in addition to the one on the outside, which has a different tyre, but also new and original. 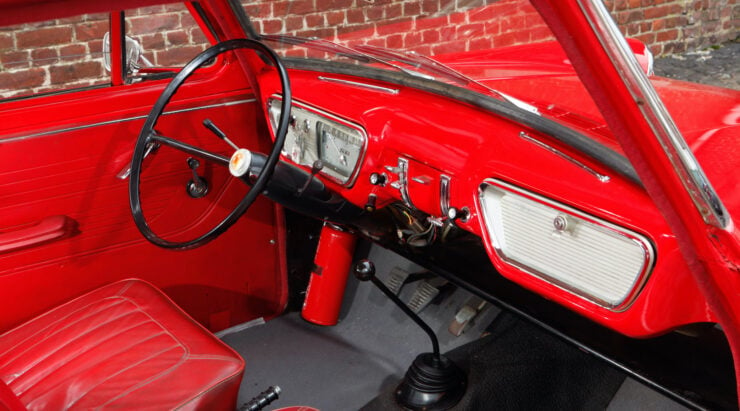 The interior is 100% analogue, with a large steering wheel, a floor mounted gear lever, and of course, three pedals.

The interior is also original with red leatherette upholstery and trim, the dominant colour in the cabin. The seats, which have a patina consistent with the age of the vehicle, had minor imperfections which have been remedied. The Spartan dashboard includes all the instruments and controls of the time in working order. A fire extinguisher is located under the dashboard.

The engine – matching number – and the four-speed manual gearbox are original and did not require any intervention other than regular maintenance (fluids, filters, platinum screws, capacitor, etc).

However, in anticipation of long journeys, some parts have been replaced: the dynamo (including brushes and bearings), the front and rear shock absorbers, the complete exhaust (in stainless steel), the radiator, the tank, the hoses, the water pump, the brake and clutch master cylinder, the Delco head and the spark plug cables.

In addition, the brake drums have been rectified. The most recent service was in 2021 and involved the annual oil change, lubrication and ignition.

If you’d like to read more about this unusual Ford Anglia Sportsman you can click here to visit the listing on leBolide, bidding is underway now. 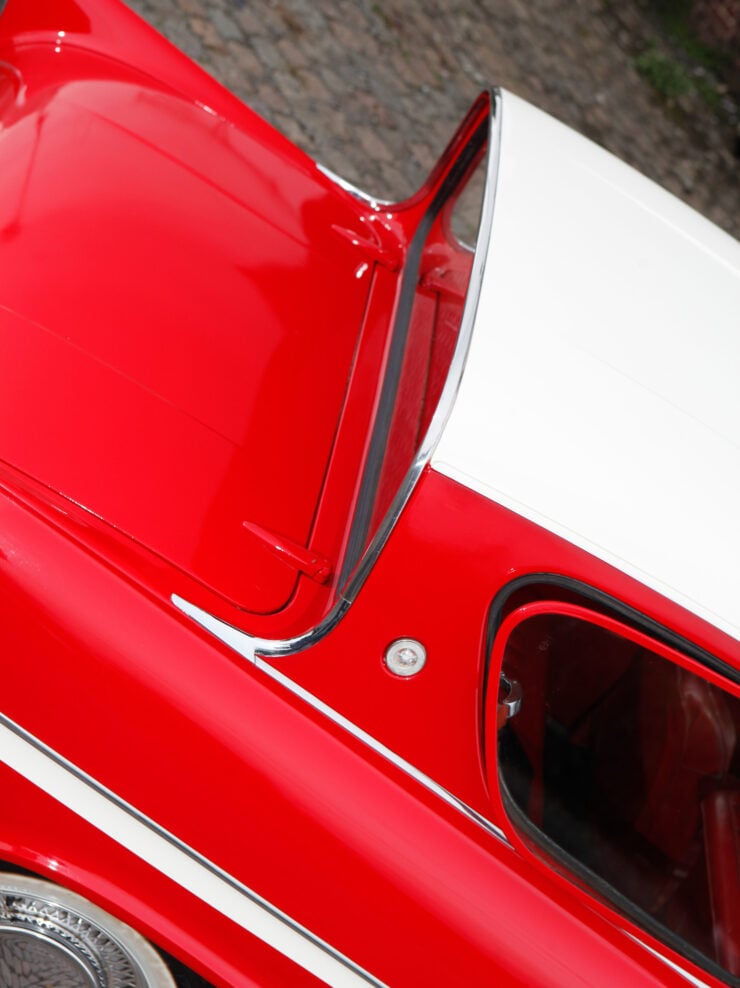 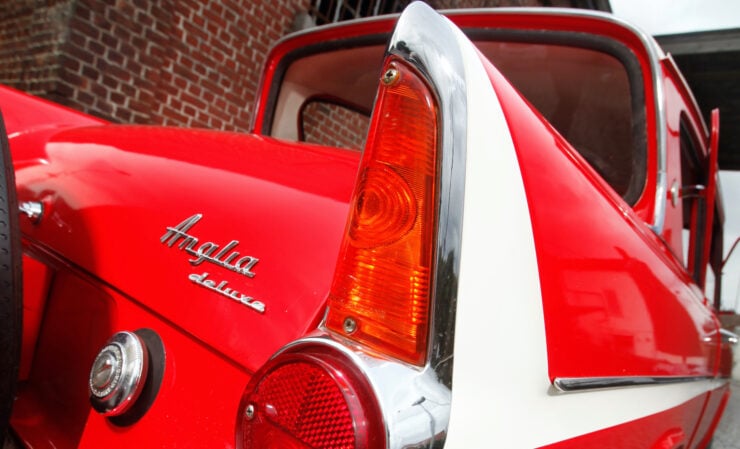 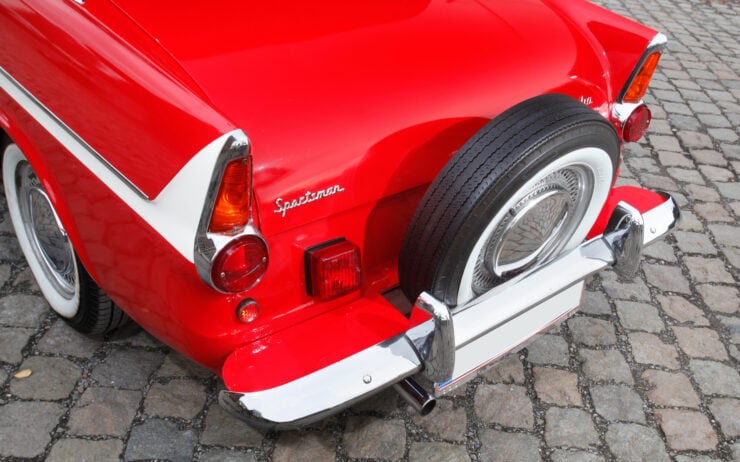 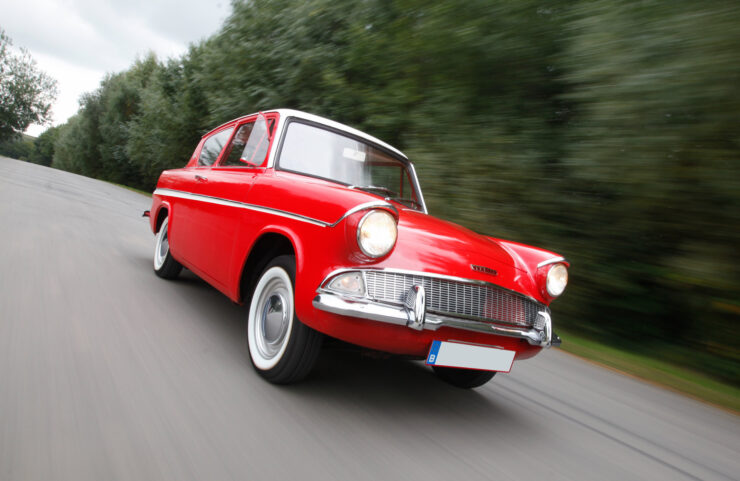 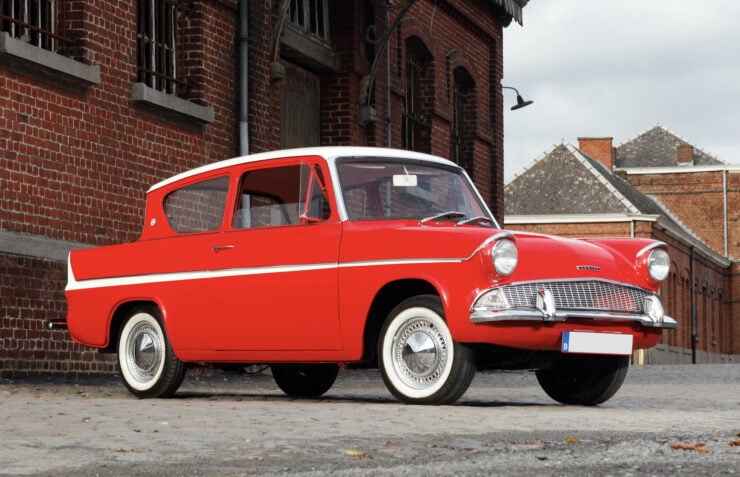 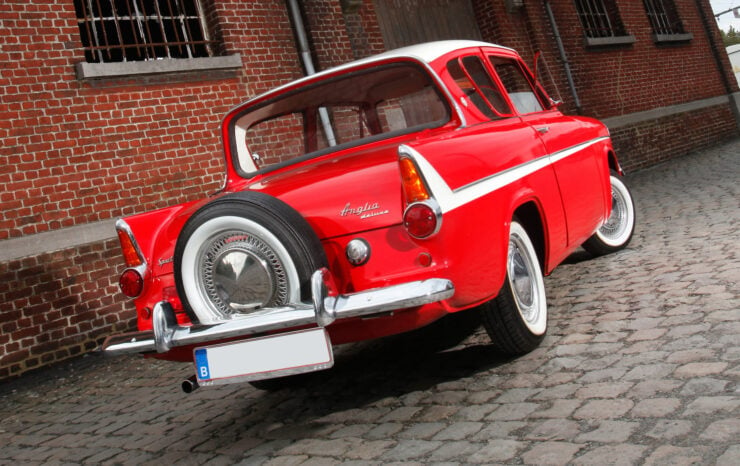 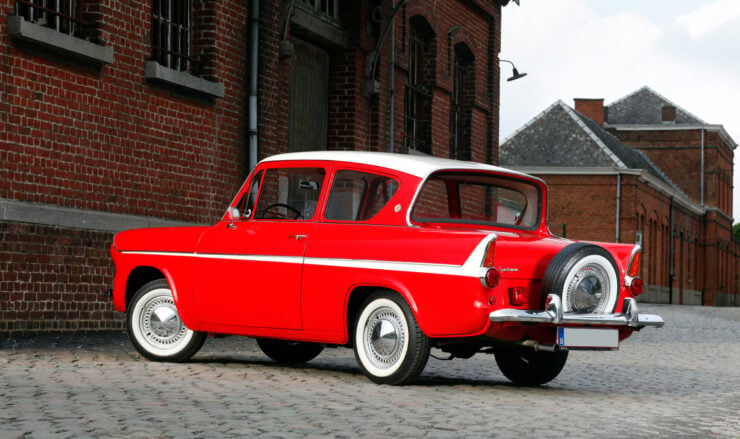 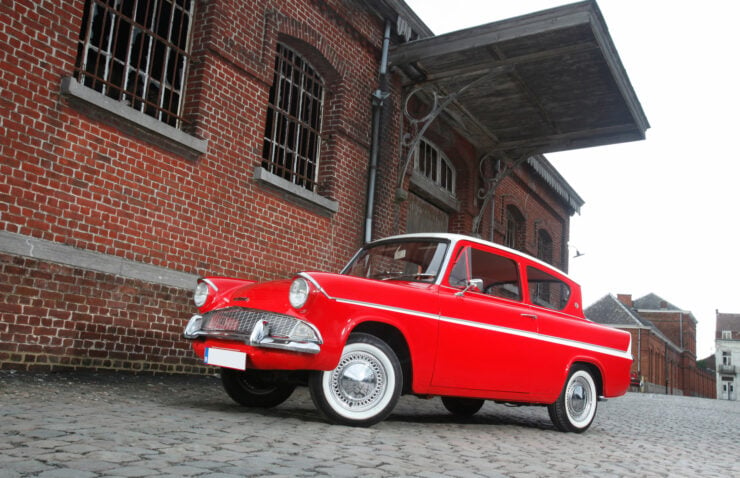 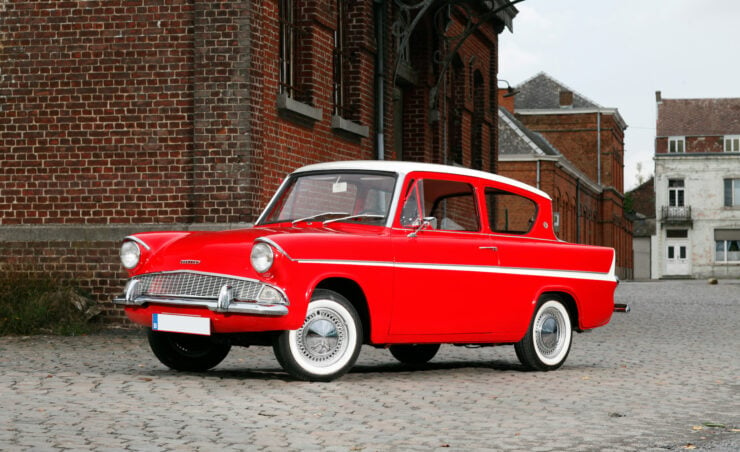 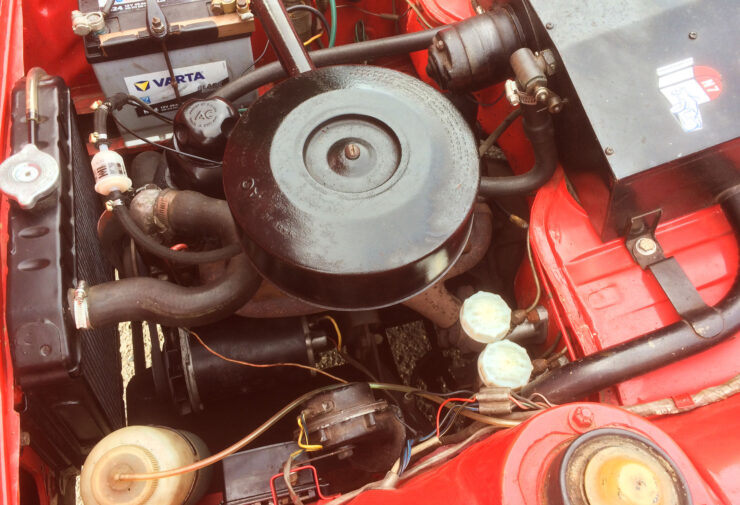