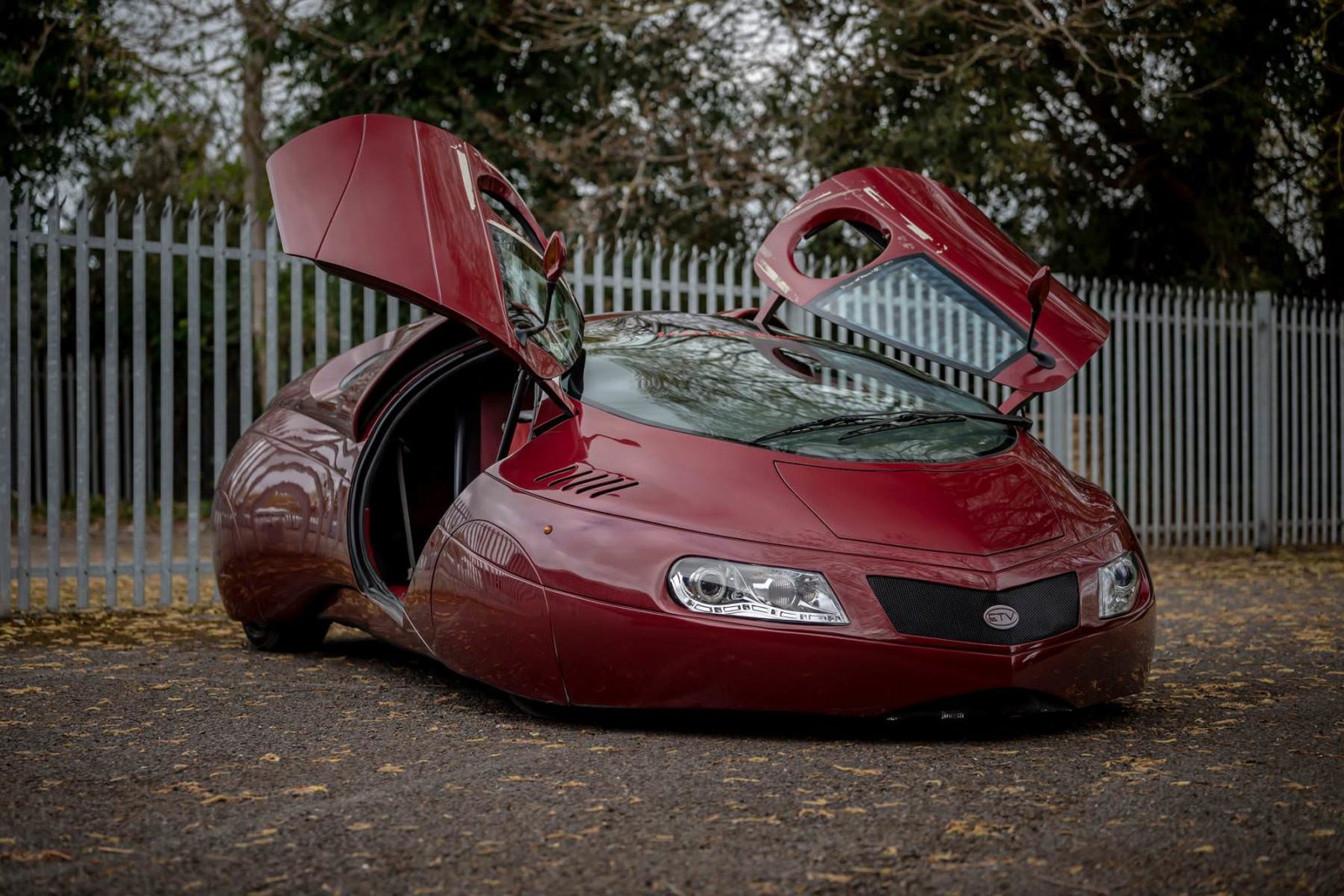 Dubbed the ETV by its creator as an acronym for “Extra Terrestrial Vehicle,” this unusual looking car was developed and built in Florida as part of a limited production run.

Although it looks like it was created by the props department for a film set in the future, the ETV is 100% road legal, it has remote opening gullwing doors, seating for two, and they say it gets over 40 mpg thanks to its slippery aerodynamics.

The ETV is a car that most of us have seen before, typically floating around as a grainy jpeg image in the dark recesses of the internet with people arguing in the comments section about what it actually is.

Above Video: This clip from Barcoft Cars shows Mike Vetter discussing the ETV, its design, and how it all gets built.

Some insist its a prop vehicle from a sci-fi film, some think its an as-yet unreleased production car, and some claim its a kit car made by a guy in Florida.

Though it’s not technically a kit car, it’s that latter group of commenters who are the closest to being right. Dubbed the “Extra Terrestrial Vehicle,” the ETV was developed by former kit car builder Mike Vetter who founded the company The Car Factory to build and sell entirely unique automotive creations.

As the story goes, the project to create the ETV began when Vetter had a daughter and realized he didn’t have space for her in his sports car. He began modifying the car, one thing led to another, and mission creep being what it is he ended up building an entirely new vehicle.

Vetter takes pride in explaining to people that he can build an ETV on a wide variety of platforms, the Chevrolet Aveo and Chevrolet Cobalt SS are the most common but they’ve been build using other donor cars including the Toyota Echo and a Porsche Boxster. 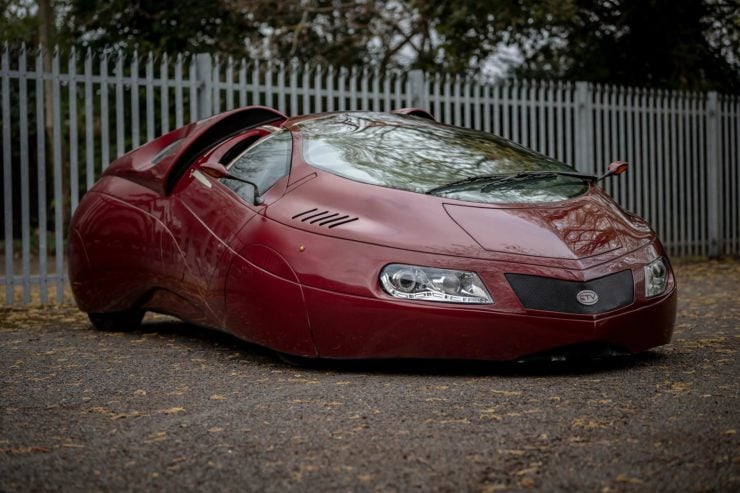 The unique styling of the ETV is unlike another vehicle on the road even today, well over 14 years since the first one was made.

The body is largely made from fiberglass, it has an unusual windshield that measures in at 4.5 feet wide by 5 feet long – it took Vetter years to find a company who would make it, even settling on a manufacturer in Peru of all places.

Though the ETV looks like it’s mid-engined it’s most frequently built in a front engined, front wheel drive specification on the Cobalt platform. This means that performance is somewhat limited but mileage is typically quite good, listed as 40+ mpg.

Inside the car you’ll find two standard bucket seats up front, and smaller 2+2-style seating in the rear. The rear seats are well-suited for children but the headroom and legroom is too limited to accommodate adults.

Gullwing doors on either side provide plenty of space for getting in and out. There’s a hatch in the rear that opens for access to the trunk, and up front there’s a small hood that provides limited access to the engine bay.

All four wheels are tucked in behind their own aerodynamic doors that can be opened when you need to change a tire.

Some versions of the ETV came with no windshield wiper and no sider mirrors, instead relying on cameras, however this example has both fitted already. 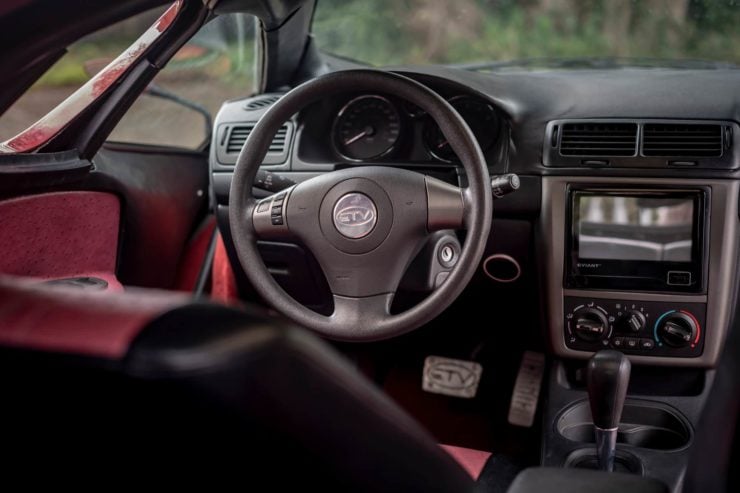 The interior of the car is largely borrowed from the original donor car, as is the engine, transmission, suspension, and braking systems.

The futuristic, aerodynamic body of the ETV is known for drawing crowds wherever it’s parked and it’s certainly not a car that’s suitable for use by someone who doesn’t like a lot of attention.

The ETV you see here is a project car that’s clearly going to need some work to get it back into roadworthy condition.

Its current situation is complicated, it was on display at the London Motor Museum for many years but due to Covid and other factors the museum has now been shuttered and its cars are being offered for sale on instruction of a high court ruling.

This means that the specification sheet of this specific car is a little hazy, it’s believed that it’s based on the Chevrolet Aveo platform with a 1.6 liter engine, however it may have a 2.2 liter Ecotec engine.

If you’d like to read more about it or register to bid you can click here to visit the listing on The Market by Bonhams. 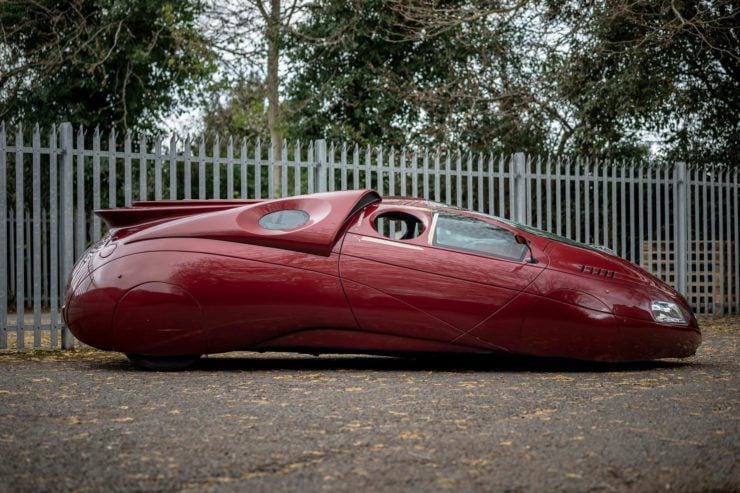 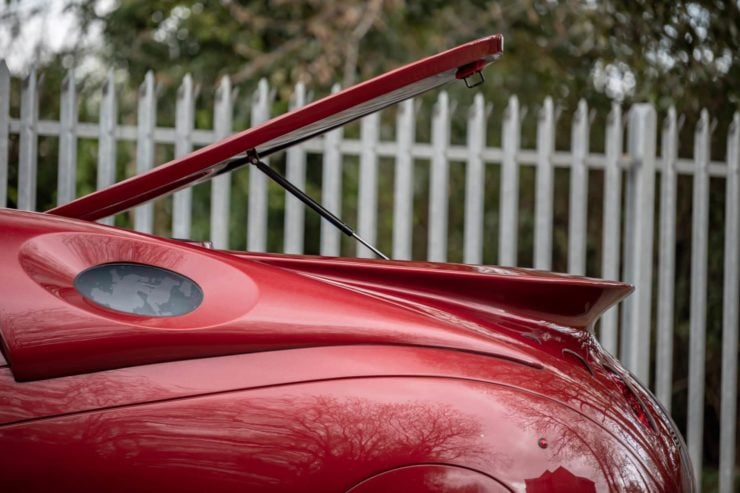 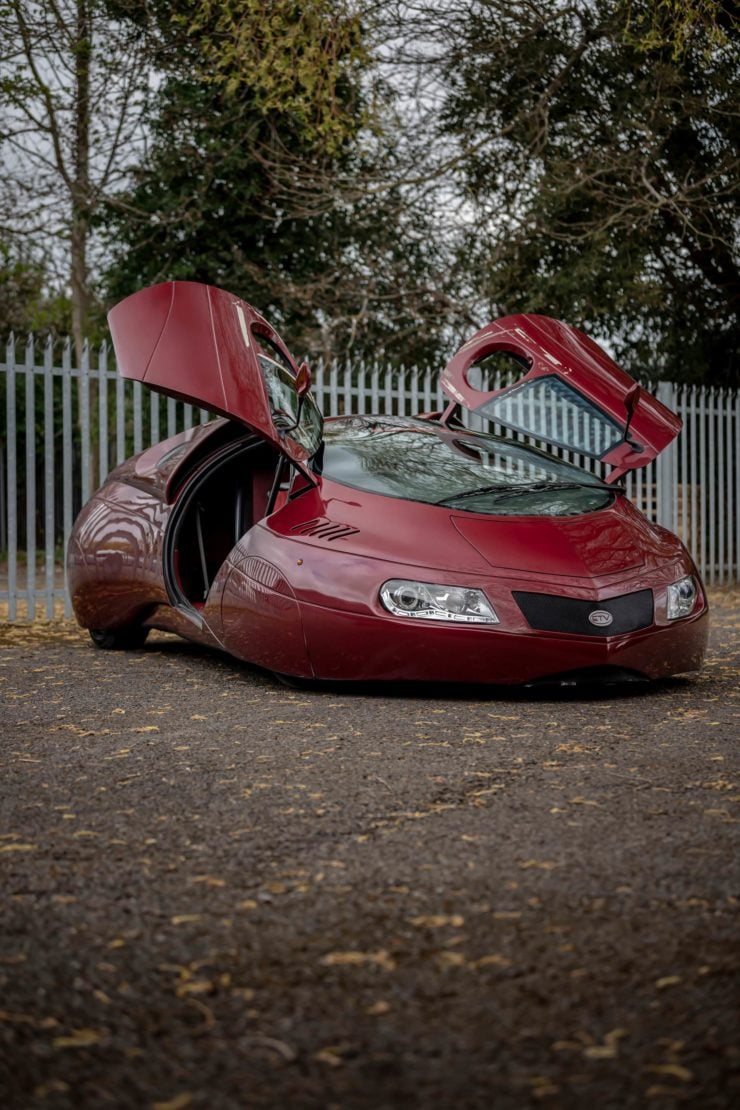 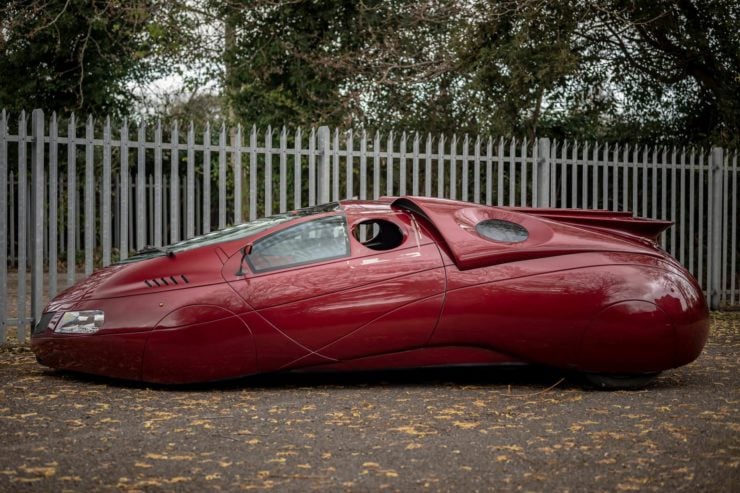 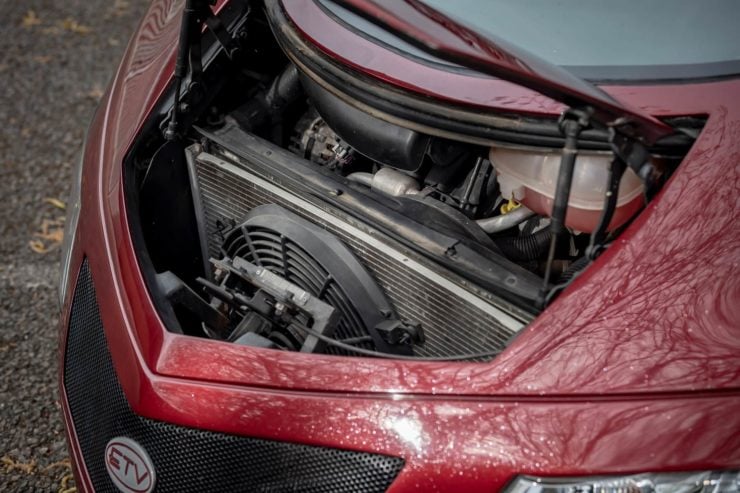 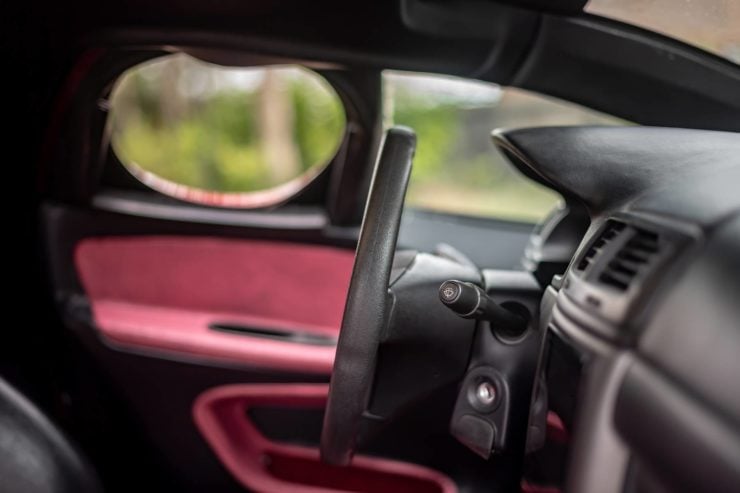 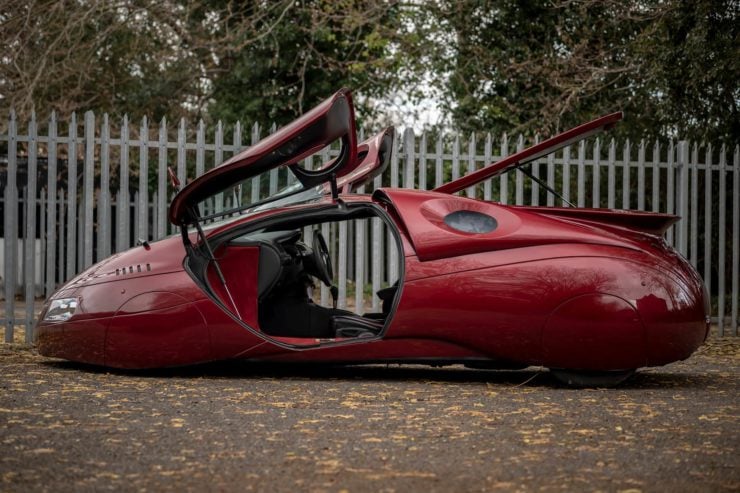 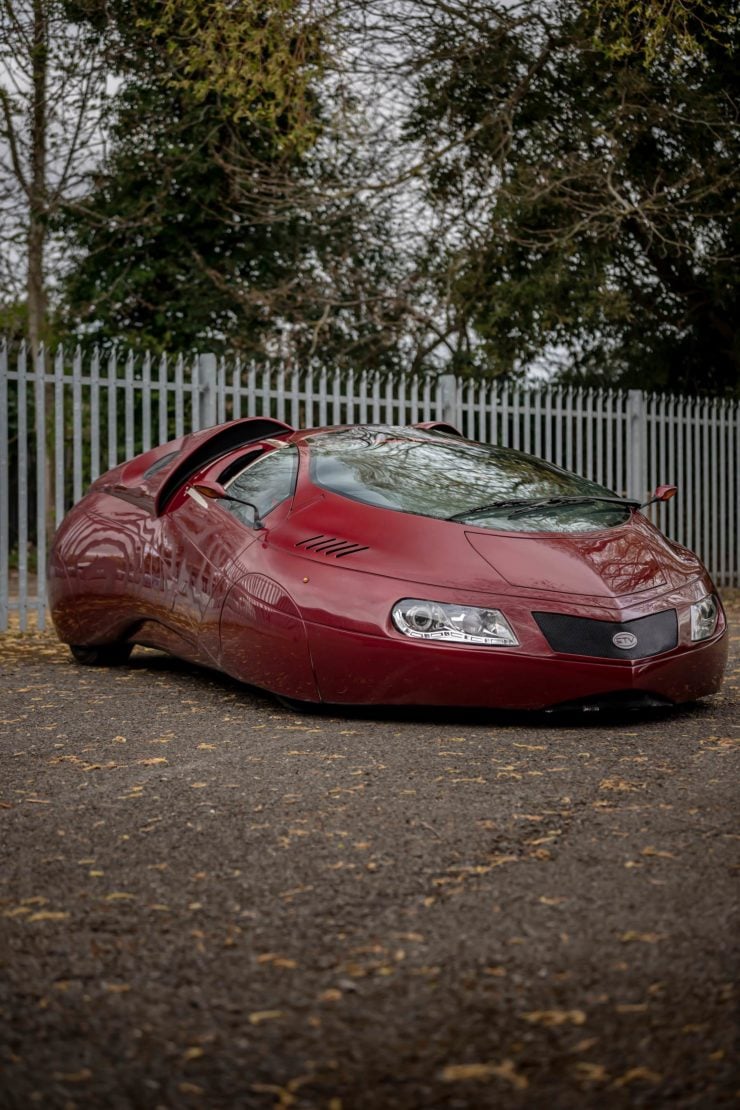 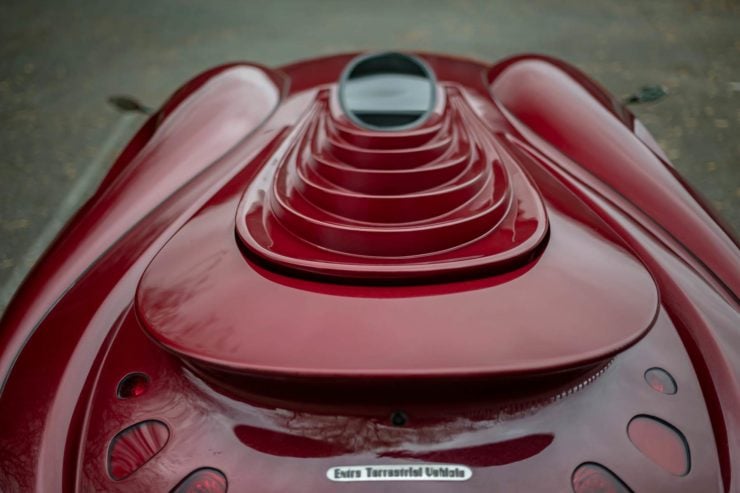 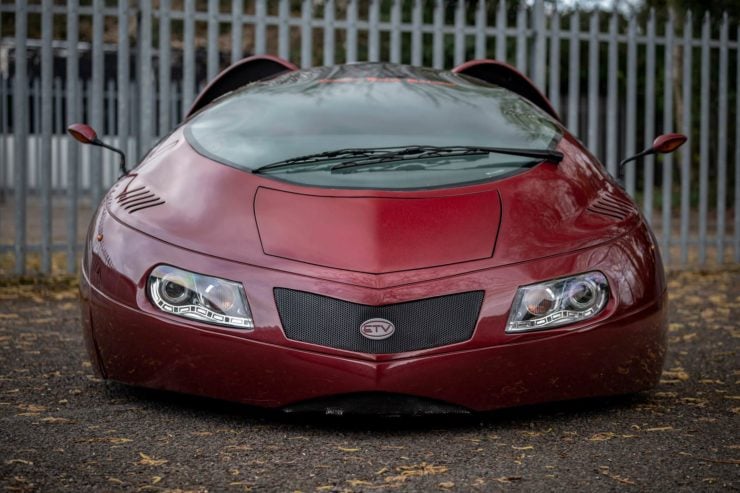