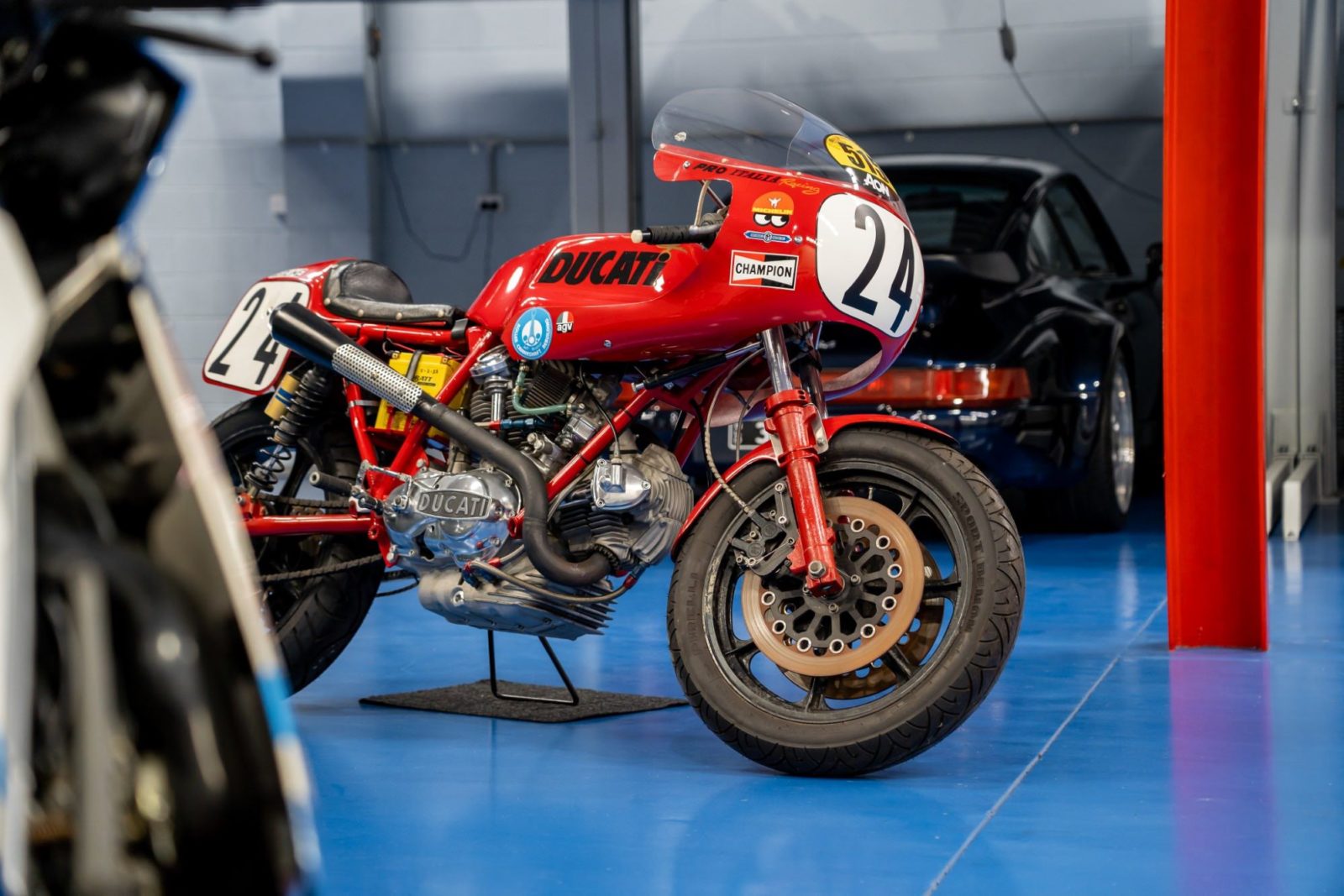 This Ducati 750SS, or 750 Super Sport, is a rare breed. Just 401 were made in 1974, the first year of production, as road-legal replicas of the bikes that took first and second place at the 1972 Imola 200 with Paul Smart and Bruno Spaggiari behind the dials.

To say that the 1-2 finish at the Imola 200 saved Ducati is almost undeniable. It made the Ducati 740 one of the most desirable superbikes in the world, and gave the Italian motorcycle manufacturer a fighting chance against the onslaught of Japanese competition.

Ducati – From Radios To The Cucciolo

It isn’t widely known that Ducati started out in 1926 making vacuum tubes, condensers, and other radio parts. 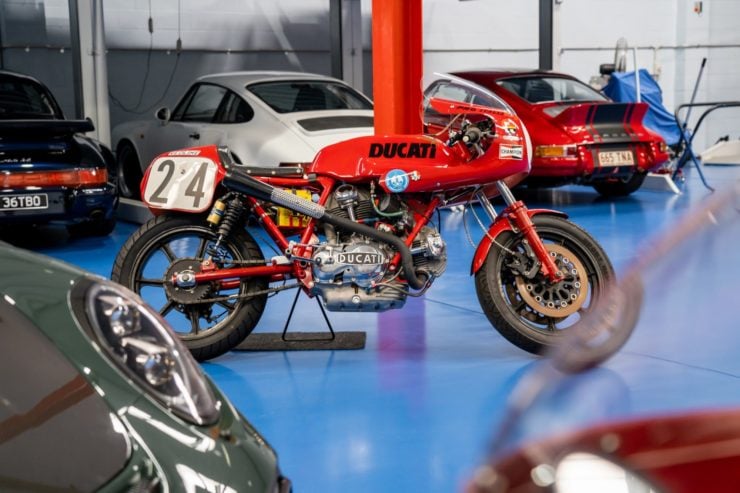 This 750SS was modified in-period with a slew of go-faster parts. It now produces 90 hp at the rear wheel, significantly more than the 72 bhp of the original.

During WWII the company was frequently targeted by Allied bombers due to the importance of radio communications on the battlefield, and the fact that Ducati was supplying many of the critical components for Italian radio manufacturing.

No one knew it at the time of course, but less than 30 years later the Allied nations would still be fighting with Ducati, though this time on the race tracks of Europe and North America.

Five years after the war had ended Ducati would release their first motorcycle. Companies were springing up across Italy and the rest of Europe offering cheap scooters, small motorcycles, and small cars.

Demand for motorized transportation was high but European economies were struggling, so it was the smaller, cheaper, and more fuel efficient motorcycles that tended to sell in the highest numbers.

Ducati’s first motorcycle was the Cucciolo, it was essentially a motorized bicycle with a bought-in 48cc “Cucciolo” engine – the Italian word for “cub” or “puppy.” 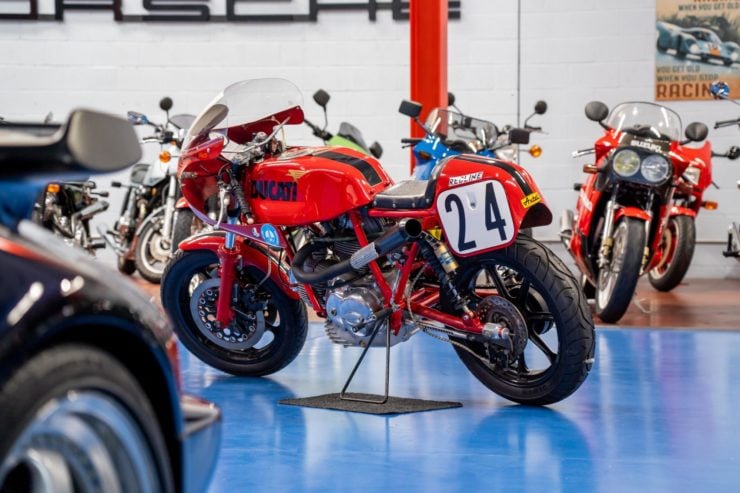 This Ducati was ridden to wins by Tony Guest at Road America and in the Daytona BOTT Amateur Modified class.

Over the coming years Ducati would develop their own engines in-house, and release larger and more complex motorcycles.

The Ill-Fated Apollo And A New “L-Twin”

By the early 1960s they were working on a Fabio Taglioni-designed 1200cc V4-engined motorcycle with over 100 bhp. It was going to be called the Ducati Apollo but tragically the project was cancelled after just a few prototypes had been made.

Rising from the ashes of the Apollo project was a new Fabio Taglioni design, it used some of the design concepts from the V4 but instead used a narrower V-twin design.

Ducati would call this engine layout the “L-twin” to because the engine has a 90º V-angle – also because they wanted to differentiate themselves from the American V-twins from across the Atlantic.

Unusually for V-twin designs at the time, this new Ducati engine used a desmodromic valvetrain – no springs were needed to close valves as both the opening and closing of both valves is controlled by the cam directly.

This does add a certain amount of complexity to the engine, it was chosen due to the fact that metallurgy was less advanced then than it is today. 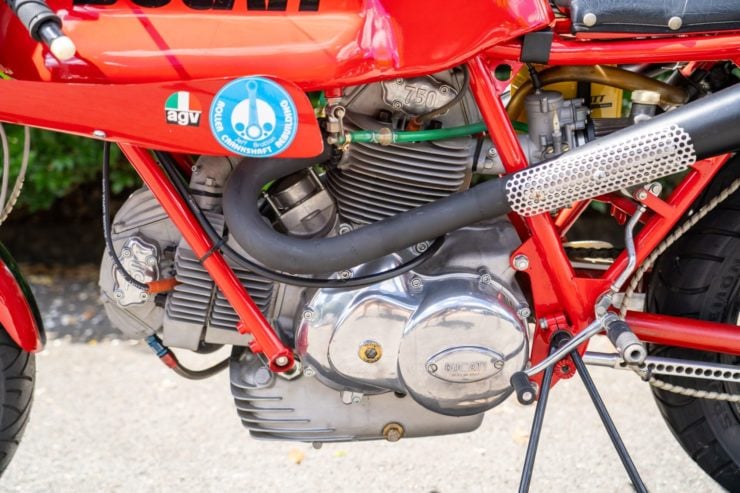 Ducati call this 90º V-twin engine design an L-twin, to help differentiate it from the narrower and more well-known American V-wins.

Getting small motorcycle valve springs that could handle a redline in excess of 9,000 rpm reliably was a genuine challenge – the use of a desmodromic system eliminated the issue all together.

After Paul Smart and Bruno Spaggiari’s now legendary 1-2 finish at the 1972 Imola 200 Ducati was inundated with demand for a road-legal version of the race bike. Work was already underway in 1972 and by late 1973 the production-ready design was shown to the world at the Milan Motor Show.

Ducati wasn’t a particularly large motorcycle manufacturer at the time and so they struggled to build the bike in numbers that would even come close to satiating demand. It’s believed that just 401 were made for 1974, the design changing significantly from 1975 onwards.

It featured a tubular steel frame that used the engine as a stressed member, the engine was oriented with the forward cylinder almost vertical to the ground as it helped provide better cooling for the rear cylinder and it lowered the center of gravity.

This 748cc L-twin engine has a single overhead cam per cylinder operating two valves, as a desmodromic system the cam has lobes and rocker arms for both opening and closing the valves, removing the need for springs. 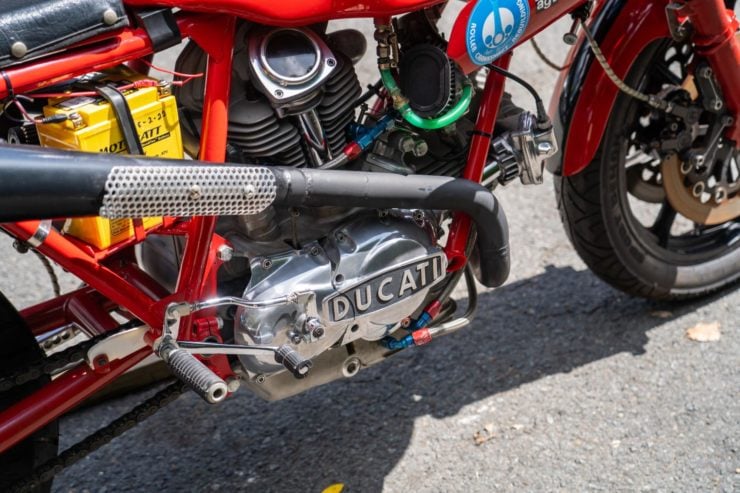 The 1974 750 Super Sport is known as the “Round Case.” A new version appeared in 1975 with a “Square Case” design and a slew of other changes – the earlier Round Case bikes are more highly sought after by collectors.

Unusually for the time the 750SS featured twin front disc brakes and a single rear disc, together offering exceptional stopping power by the standards of the era. A distinctive fuel tank design similar to the Imola bikes was used, along with a half faring, and a single seat with a small rear cowl.

The Ducati 750SS was so close to the race bikes that many modified them for competition and won races on them. The fact they could also be ridden on the road made them all the more appealing.

The bike you see here is one of those examples that was modified for racing in period. It was remarkably successful too, competing in the AMA “Battle of the Twins” (BOTT) during the 1970s and 1980s claiming a number of victories in the process.

Rider Tony Guest rode this machine to wins at Road America and in the Daytona BOTT Amateur Modified class. It was later purchased by Jerry Roman, going on to win several Concours events.

This bike was modified in-period by the Woods Motor Shop, it has a 905cc big-bore conversion, an 11.5:1 compression ratio, modified 40mm Dellorto carburetors, Imola high-lift cams, cylinder heads ported by C.R. Axtell, and a total output of 90 hp at the rear wheel.

If you’d like to read more about it or register to bid you can click here to visit the listing on Collecting Cars. 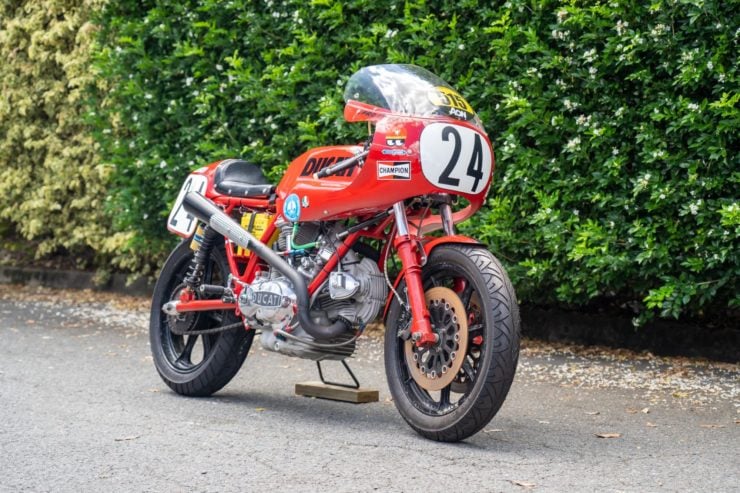 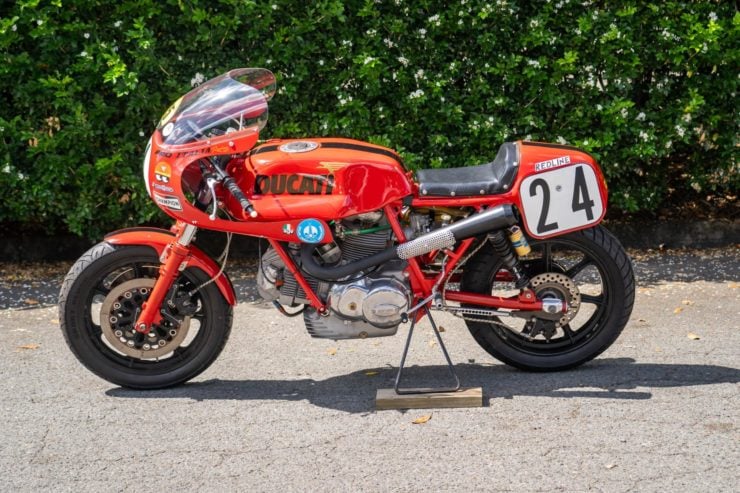 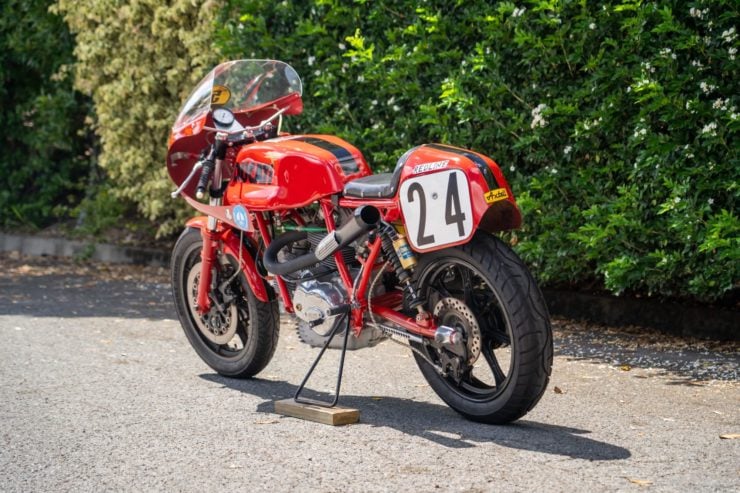 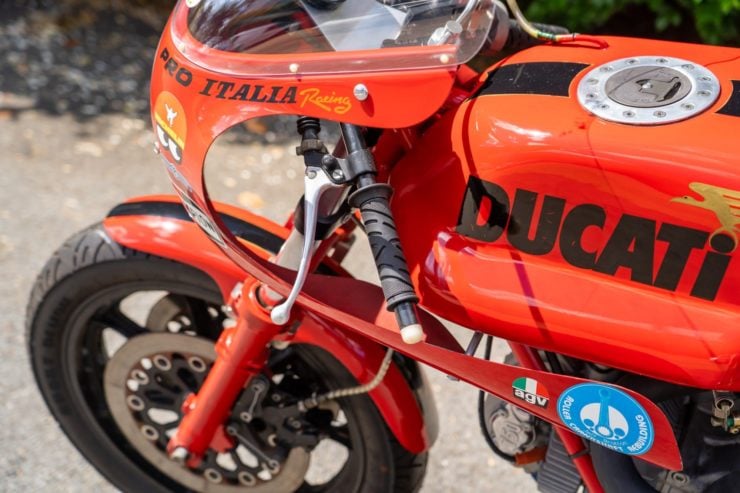 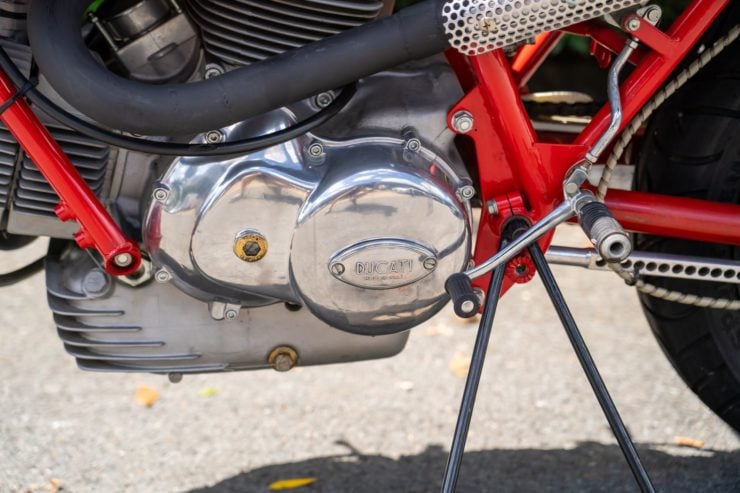 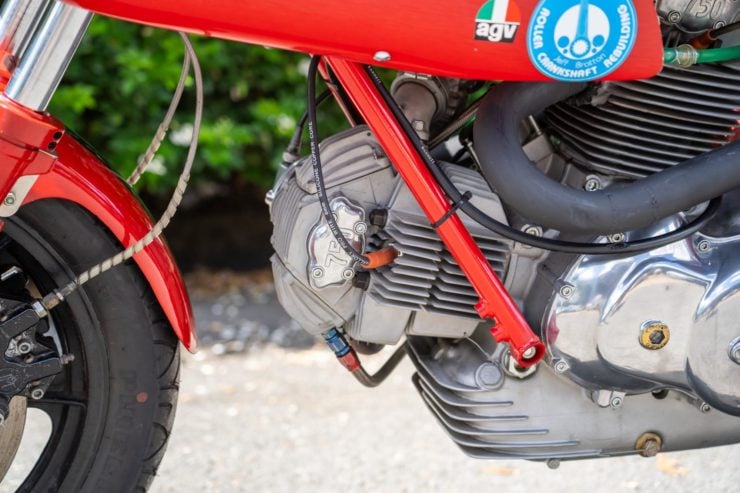 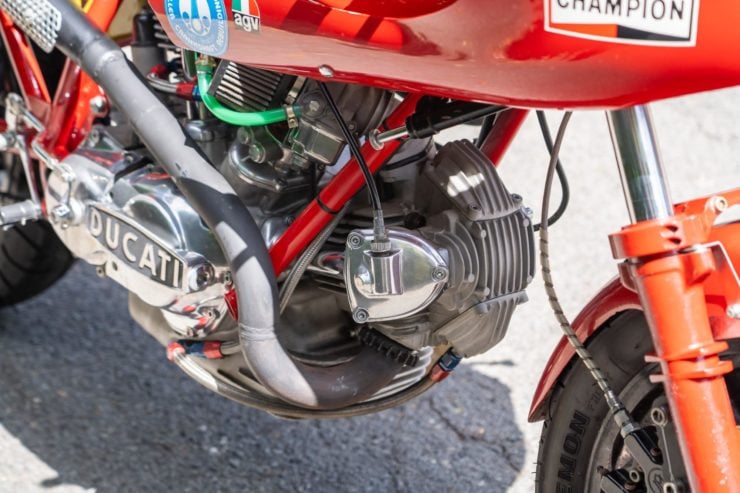 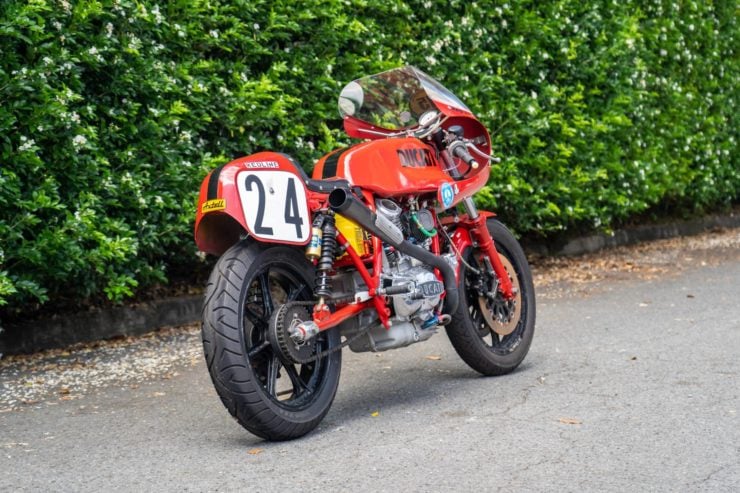 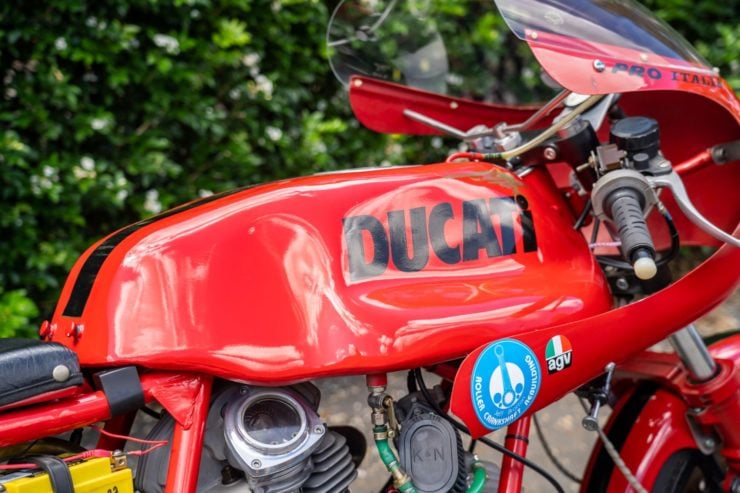 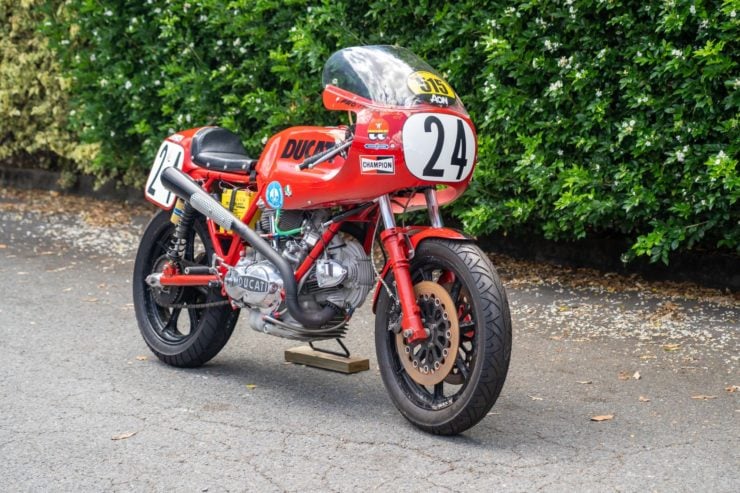 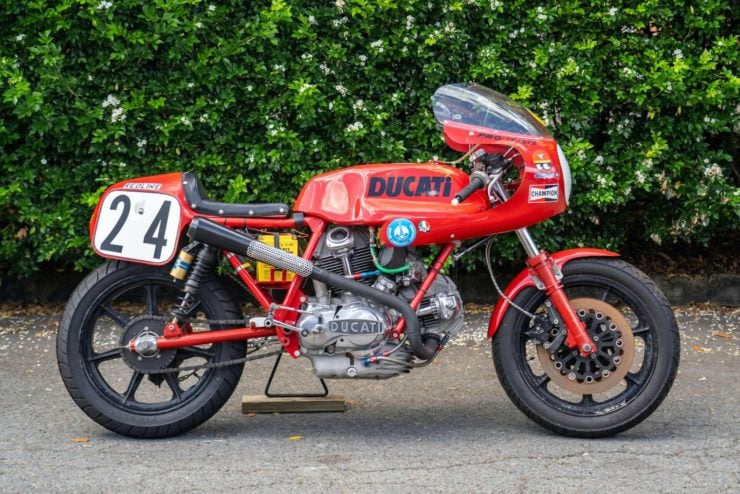 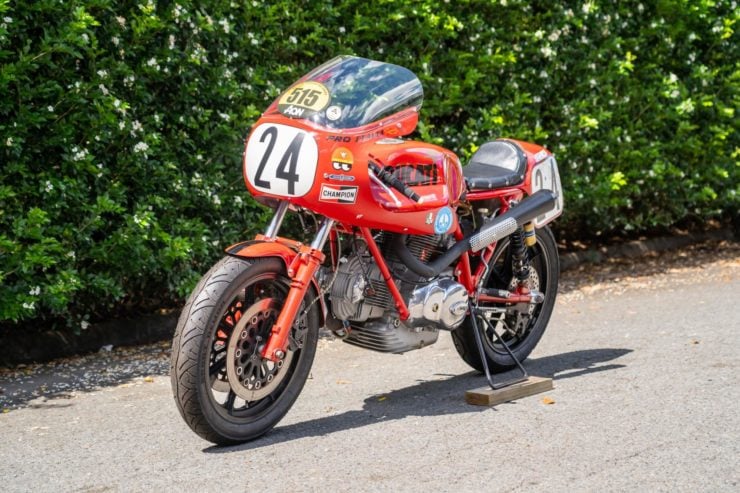