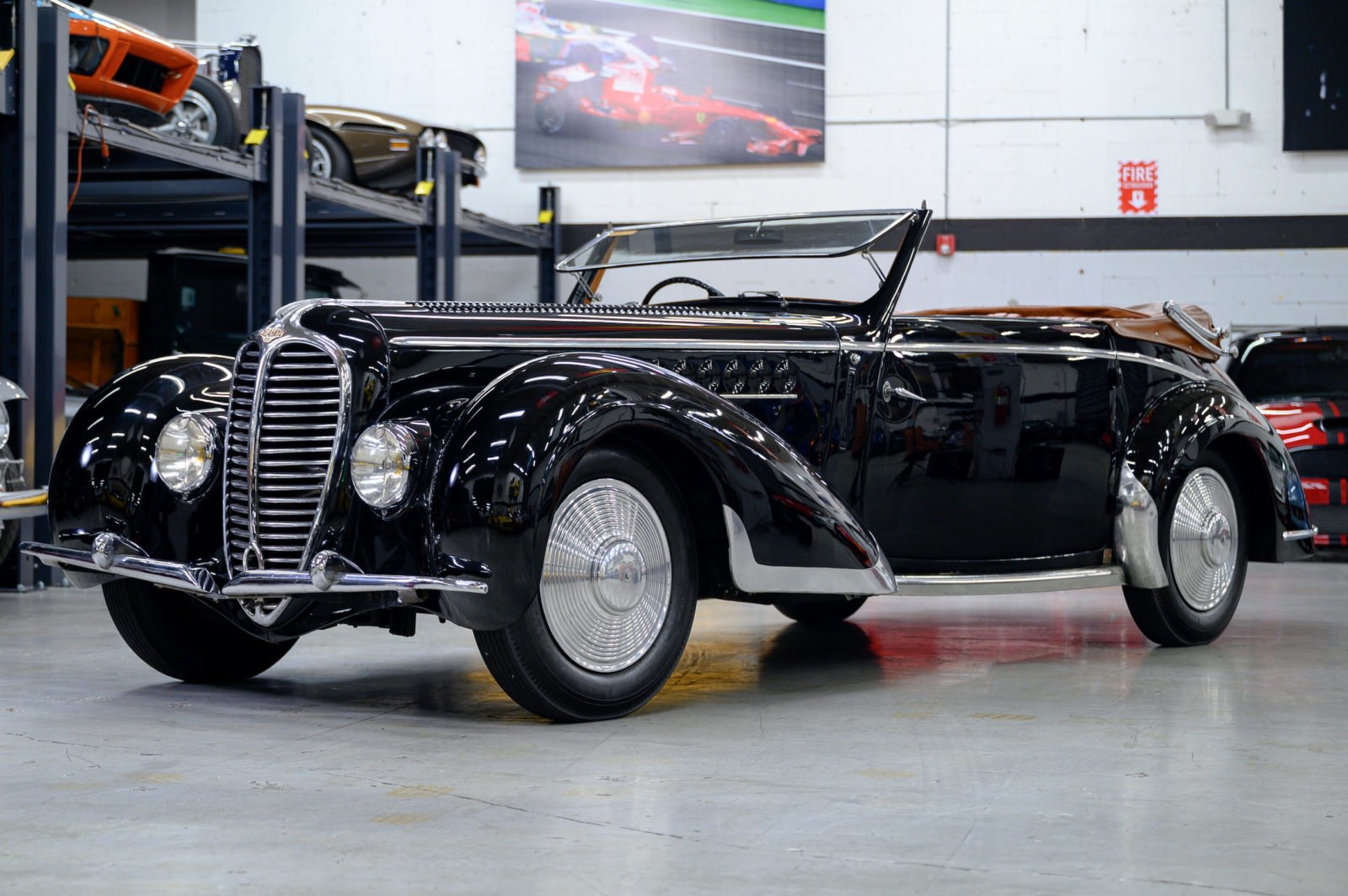 The Delahaye 135 was one of the most important French performance cars from the 1930s. In racing trim the 135 won the illustrious Monte Carlo Rally in 1937 and the 24 Hours of Le Mans in 1938, taking a slew of other wins and podium places in races as far away as Australia.

As was common at the time, Delahaye made the powered rolling chassis for the 135, it was then sent out to have a body fitted. The companies who built 135 bodies are a veritable who’s who of French coachbuilding – names like Figoni & Falaschi, Marcel Pourtout, Jacques Saoutchik, Henri Chapron, Faget-Varnay, and many more.

Delahaye was founded back in the early days of the automobile in 1894 in the city of Tours in central France. The company was named for its founder, Émile Delahaye, a French engineer who had a particular interest in automobile racing. 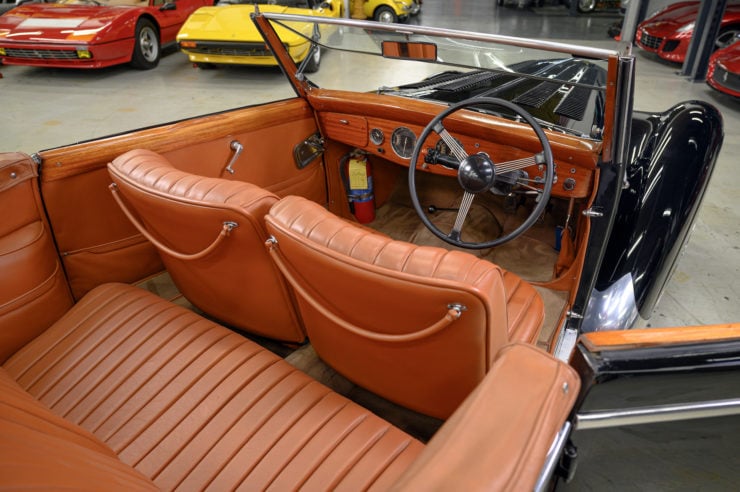 This 135M is finished in black with a cognac interior and a brown folding cabriolet top.

The formative years of the company were focussed largely on racing, Émile Delahaye entered his four-wheeled creations into early events like the 1896 Paris–Marseille–Paris race, the 1897 Paris–Dieppe race, the 1898 by the Marseilles–Nice rally, the Course de Perigeux, and the Paris–Amsterdam–Paris race.

Within a few years the company moved their manufacturing operations to Paris, and released a number of production automobiles, early examples of which featured rear-mounted engines and tiller steering.

Émile Delahaye retired in 1901, selling his shares in the company that carried his name. It was around this time that the company left the world of racing behind and chose to instead focus on the manufacturing of heavy duty commercial vehicles like trucks, along with a limited number of automobile chassis.

By the early 1930s Delahaye was in dire financial straights, they embarked on a return to their racing roots with the development of a new line of cars – let by the Delahaye 135. 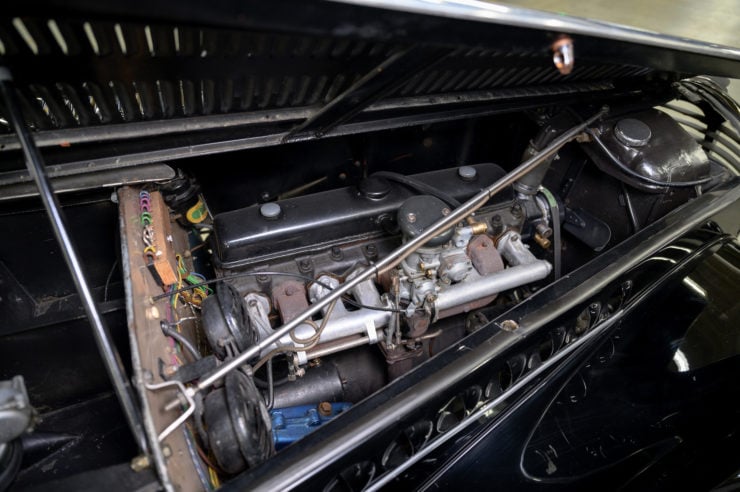 The engine is the more powerful 135M specification inline-six, with overhead valves, a four bearing crankshaft, and a displacement of 3.6 liters.

When the Delahaye 135 was released in 1935 it proved immediately successful, and it helped to launch Delahaye back to the forefront of the performance motoring world.

Both racing and road-going versions of the 135 were offered, and buyers could choose from a long list of iconic coachbuilders to create bodies for their new cars to their own specifications.

The engineering that went into the Delahaye 135 wasn’t particularly groundbreaking and yet the car managed to become more than just the sum of its parts. The company’s experience building heavy duty trucks resulted in over-engineered powertrains that were remarkably reliable, making them particularly well-suited to endurance events like the 24 Hours of Le Mans.

The first Delahaye 135 from 1935 was powered by an inline-six cylinder engine with overhead valves, a four bearing crankshaft, and either a four-speed manual transmission with partial synchronization, or a four-speed Cotal pre-selector unit. 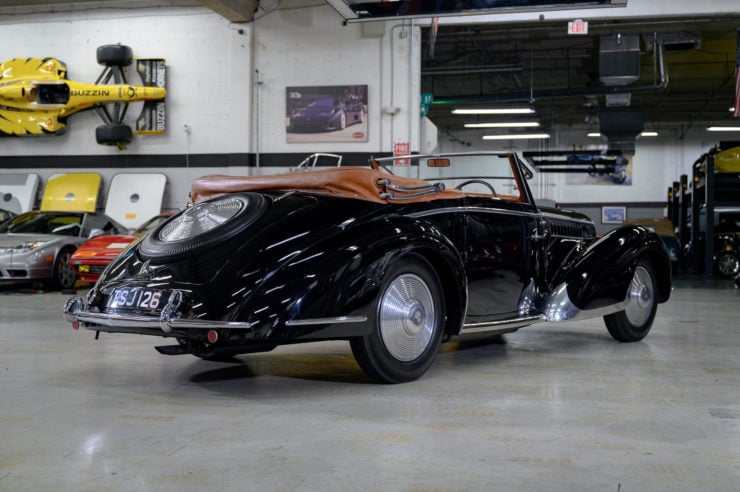 The 135 used a steel chassis with independent front suspension on leaf springs and a live axle on leaf springs in the rear. Brakes were cable operated drums fitted at each wheel.

The car would be quickly nicknamed the “Coupe des Alpes” after its success in the Alpine Rally, it also enjoyed wins in the Monte Carlo Rally in 1937, the 24 Hours of Le Mans in 1938, the 1949 Australian Grand Prix, and a slew of other races.

Production ceased during WWII, it was restarted after the war and continued until 1954. Approximately 2,000 examples of the 135 (and its related models) were built and today they’re highly-prized among collectors.

The car you see here is a desirable post-WWII 1947 Delahaye 135M, it’s fitted with a cabriolet body that was built by legendary French coachbuilder Henri Chapron. 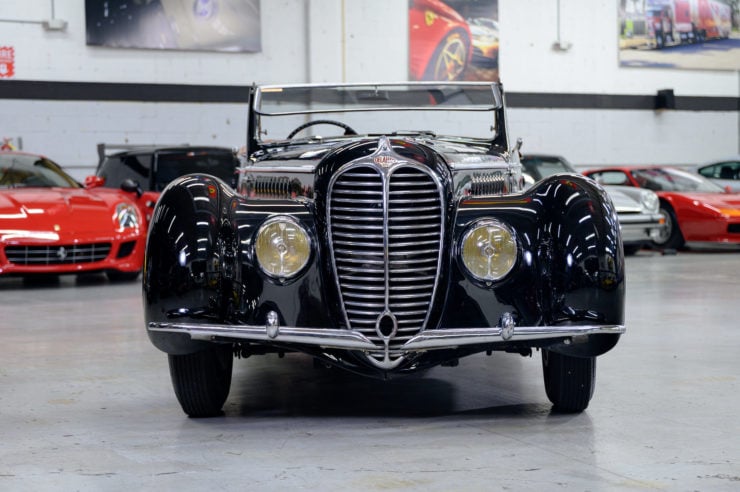 The shape of the front grille is a distinctive Delahaye trademark, making them easy to identify from across a concours lawn regardless of who the coachbuilder was.

Little is known about this car’s early history, it was exported from Europe to the United States 20+ years ago and it’s wearing an older restoration now that is showing come signs of light patina.

The original engine is long gone, replaced instead by a single-carbureted version of the same 3.6 liter 135M engine which had been offered from 1936 onwards as an upgrade over the original 3.2 liter unit. Power is sent to the rear live axle by way of a four-speed Cotal preselector gearbox. 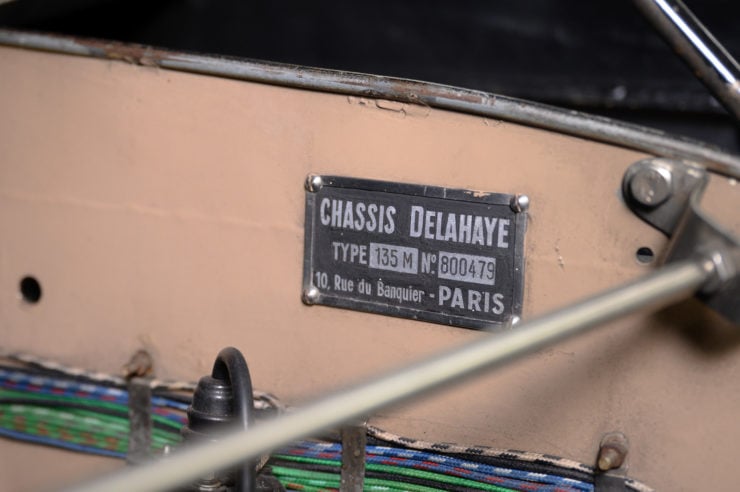 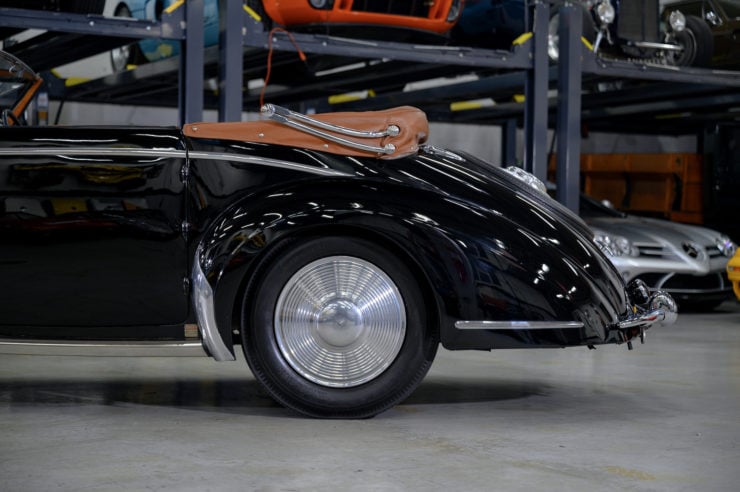 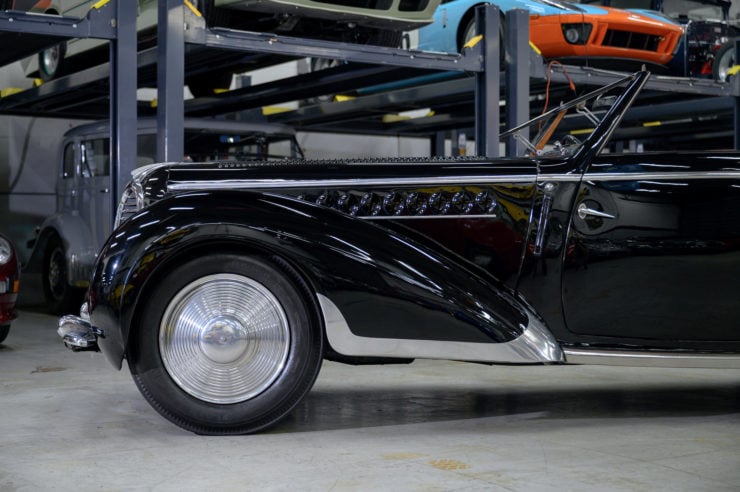 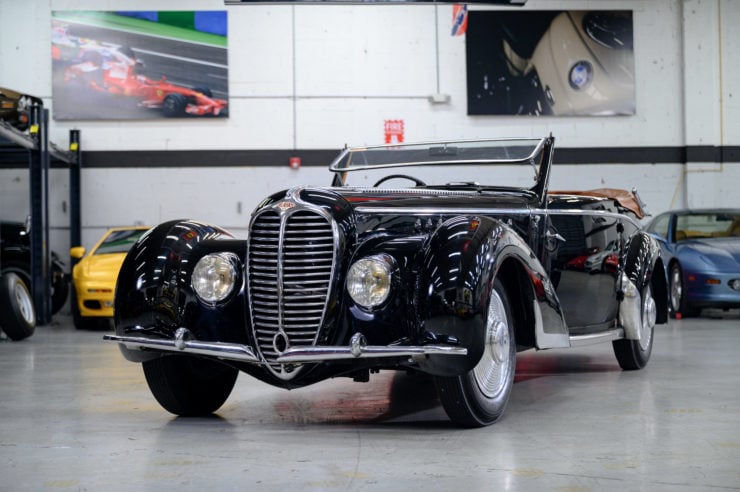 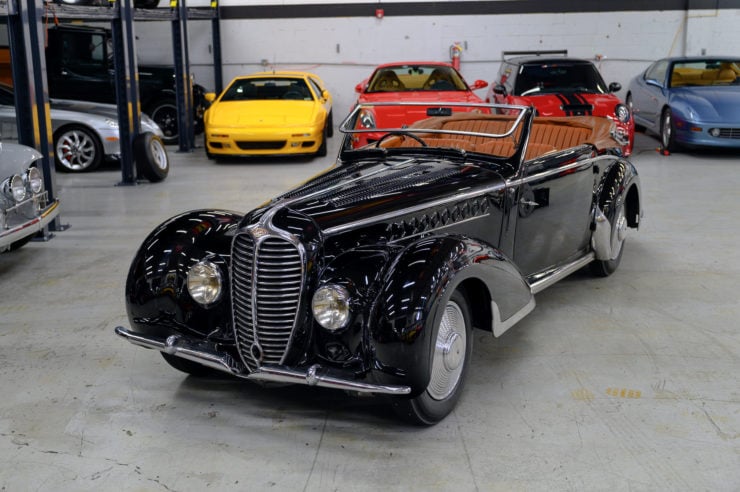 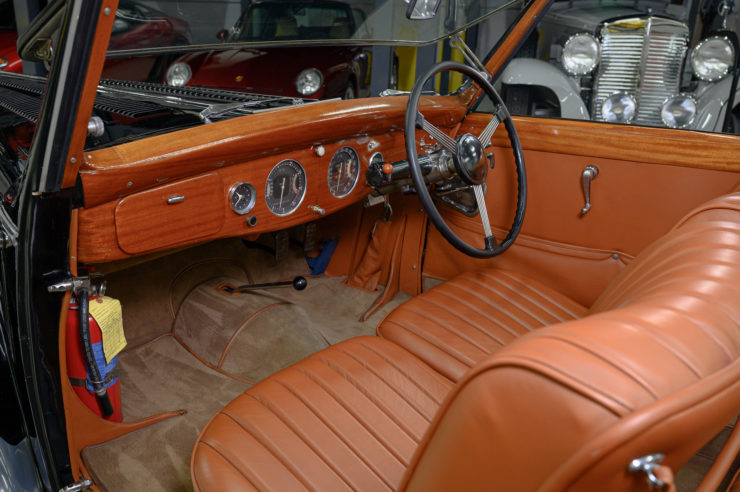 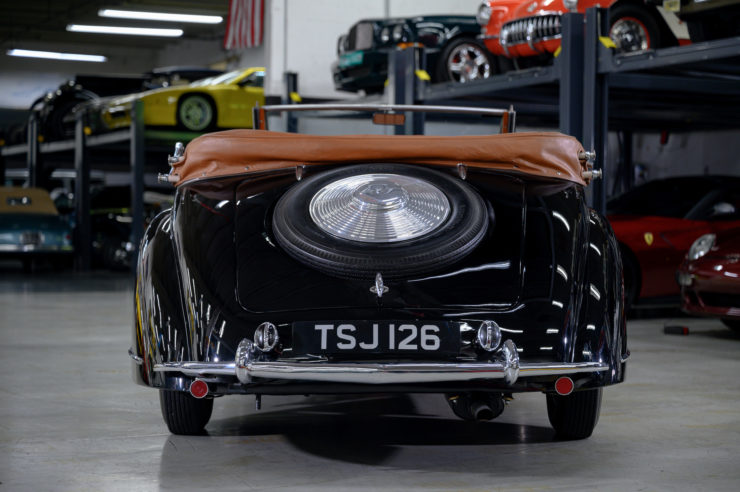 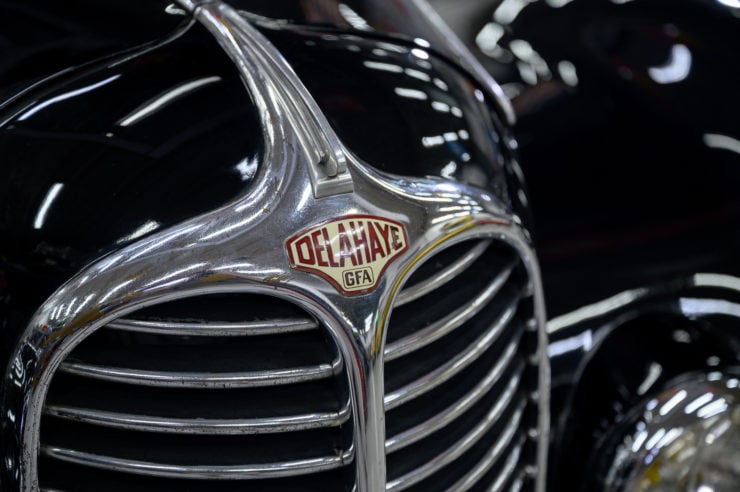 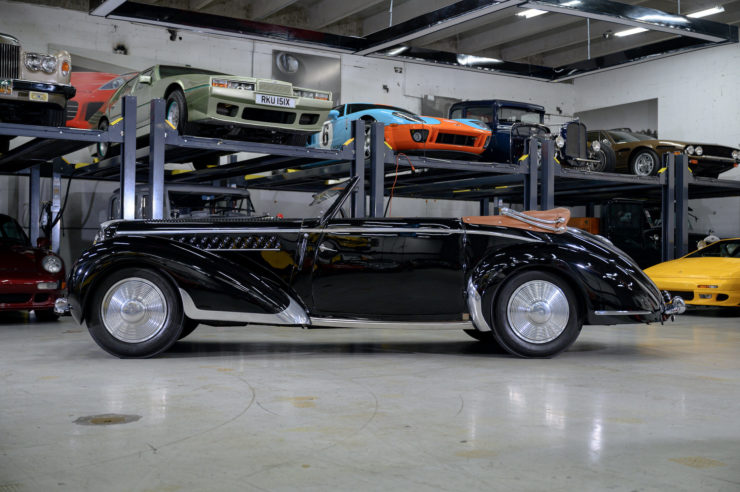 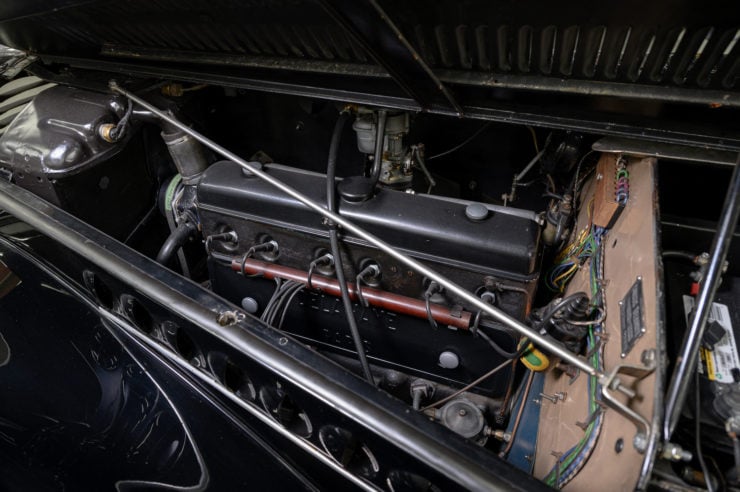