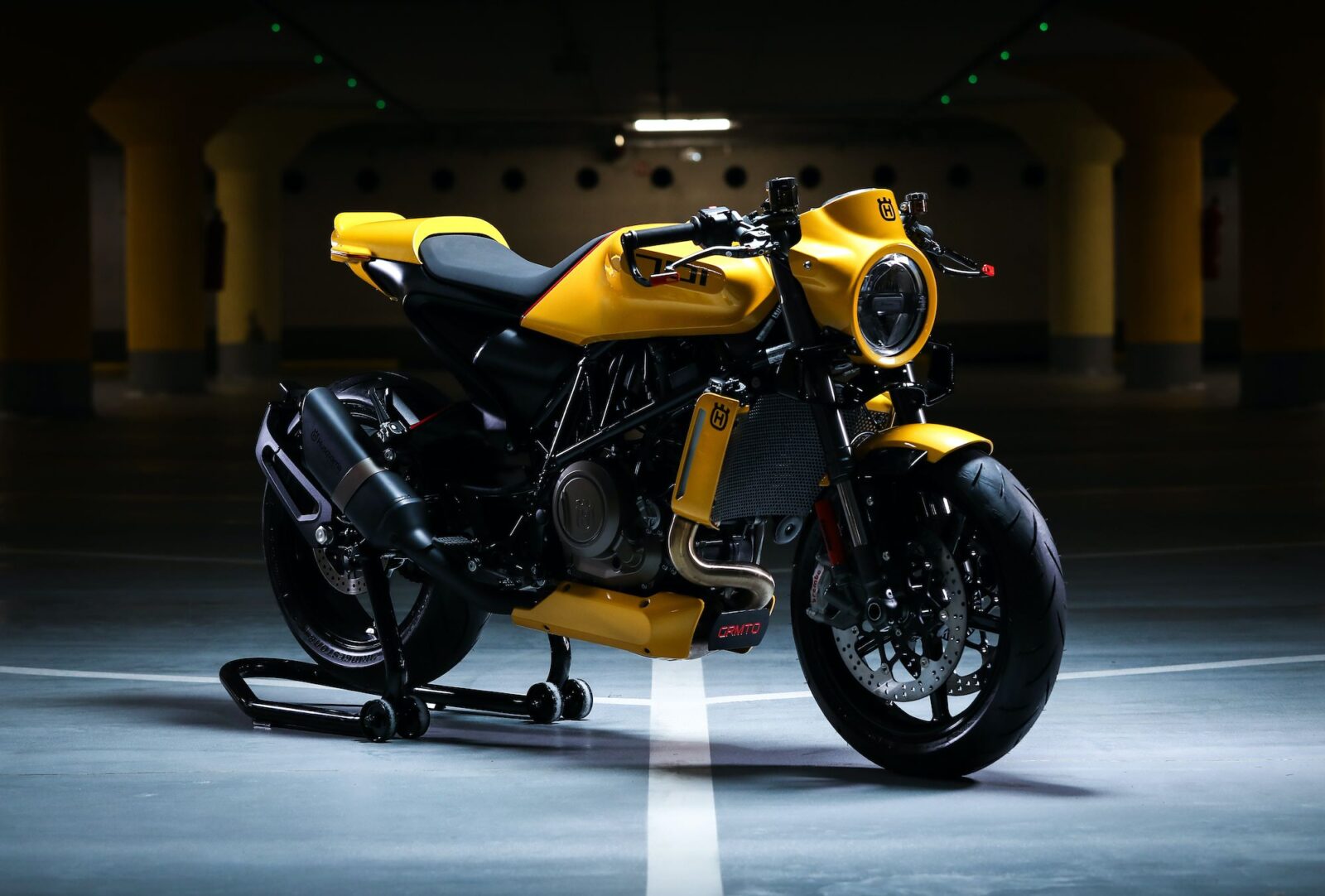 This custom Husqvarna Vitpilen 701 was built by the team at Gas & Retro based out of Slovenia in Eastern Europe. This isn’t a country we typically associate with world class custom motorcycles but Gas & Retro founder Ziga Petek is quickly changing this perception.

The Vitpilen and Svartpilen family of motorcycles have arguably been the most important road-going Husqvarna motorcycles released (so far) in the 21th century.

That’s probably a controversial thing to state as fact but after years of trouble we’re now seeing the Husqvarna badge on street legal motorcycles out on the road regularly, both on the 401 series and on the more recent 701 series. 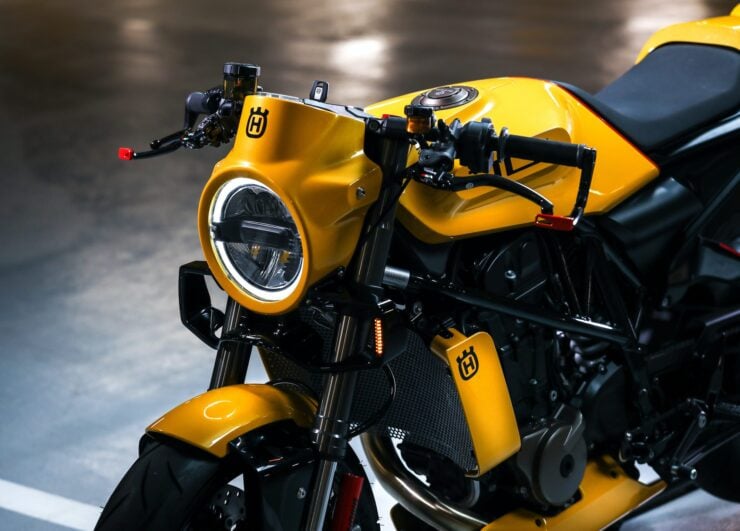 This 701 has been fitted with a full GRMTO body kit in an eye catching shade of yellow, helping it stand out from the typically more tame colors offered by the factory.

In Swedish “Vitpilen” means white arrow and “Svartpilen” means black arrow, possibly an indication of the purpose of these motorcycles. They’re intended to be modern urban motorcycles with sharp and precise handling unencumbered by excess weight.

Over the course of its long history Husqvarna has belonged to a number of different companies including Electrolux, BMW, and most recently KTM.

Of all the owners it’s been KTM that seems the best suited to running Husqvarna as it should be operated – and modern Huskies benefit greatly from the use of tried and tested KTM engines.

In factory stock configuration the Vitpilen 701 is powered by a liquid-cooled, four-stroke, 692cc single-cylinder engine producing 75 bhp and 53 lb ft of torque. At the time of its release, this was the most powerful single-cylinder motorcycle engine in the world. 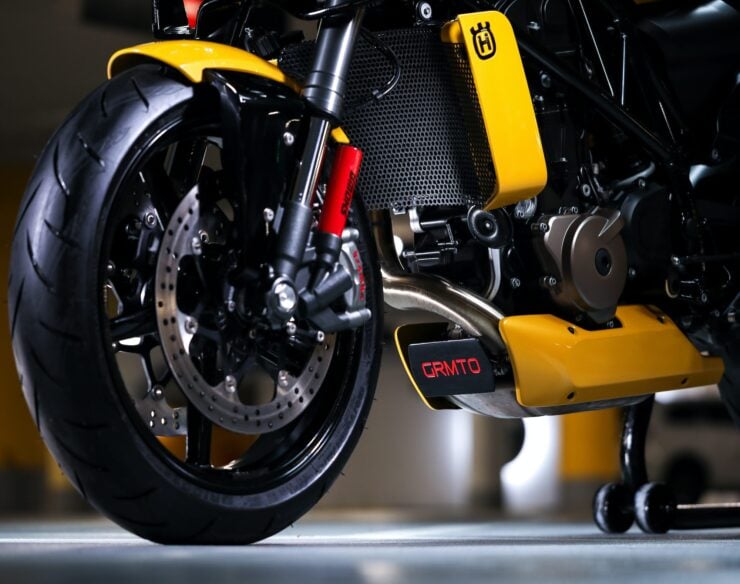 With its high-performance 43mm Showa BFF forks sourced from a Kawasaki Ninja ZX-10R, coupled with the dual-sided Brembo M50 monobloc disc brakes this Vitpilen 701 has improved handing and braking power compared to the original.

Power is sent to the rear wheel via a 6-speed gearbox and a chain final drive. The 701 rides on WP suspension including 43mm fully adjustable forks up front and a monoshock in the rear with adjustable preload and rebound. Braking is handled by a single sided 320mm rotor with a Brembo four piston caliper up front, and 240mm rotor with a single piston Brembo caliper in the rear.

The Vitpilen 701’s chassis is a rigid tubular steel trellis frame that uses the engine as a stressed member, and the kerb weight of the model is just 157 kilograms or 346 lbs.

The Vitpilen 701 you see here has been given a series of subtle upgrades to both improve its performance and to update its looks. 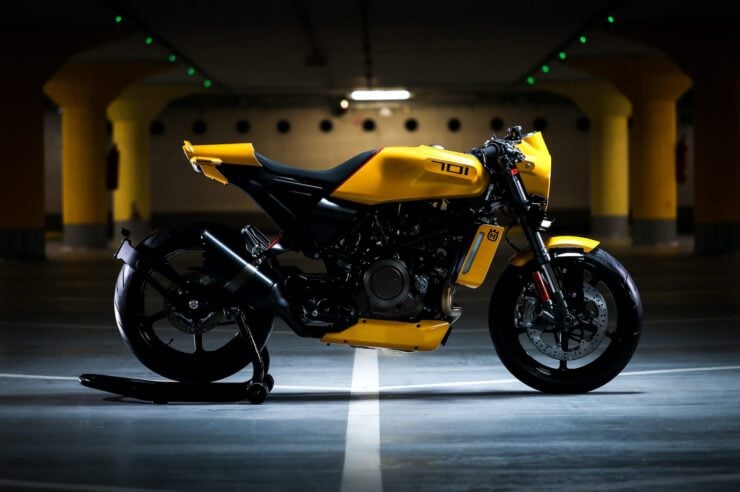 The styling of the Vitpilen 701 has been winning it fans since its introduction in 2018, this example has been carefully upgraded to keep the aesthetics on point but improve the performance.

Perhaps the most signifiant change is the addition of 43mm Showa BFF forks up front from a Kawasaki Ninja ZX-10R, along with their matching dual Brembo M50 monobloc disc brakes and Brembo Cortacorse RCS brake and clutch master cylinder.

Given the relatively low weight of the Vitpilen 701 this front brake upgrade, notably improving the model’s already good handling and braking performance.

The bodywork features a full GRMTO body kit with wings on the front fairing and rear seat cover, as well as a custom shortened exhaust, a customized numberplate holder and tail unit, a redesigned headlight cowl, and built-in LED indicators front and back.

The completed bike now has just 430 kms on the odometer, or 267 miles, and it’s currently being auctioned live online by Collecting Cars. If you’d like to read more about it or register to bid you can click here to visit the listing. 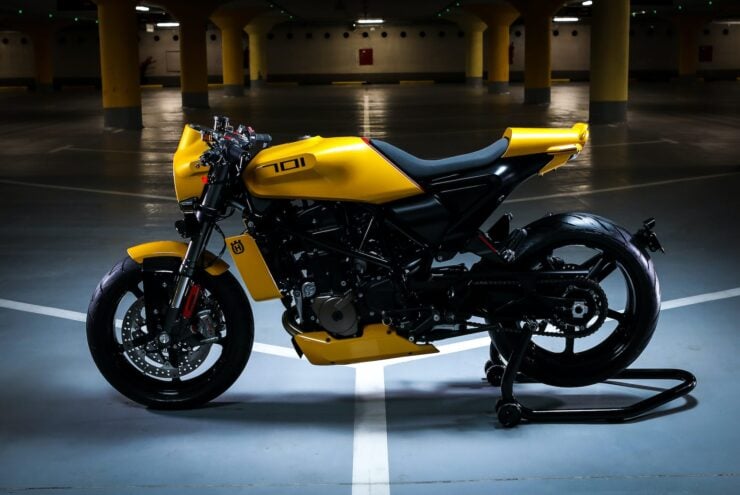 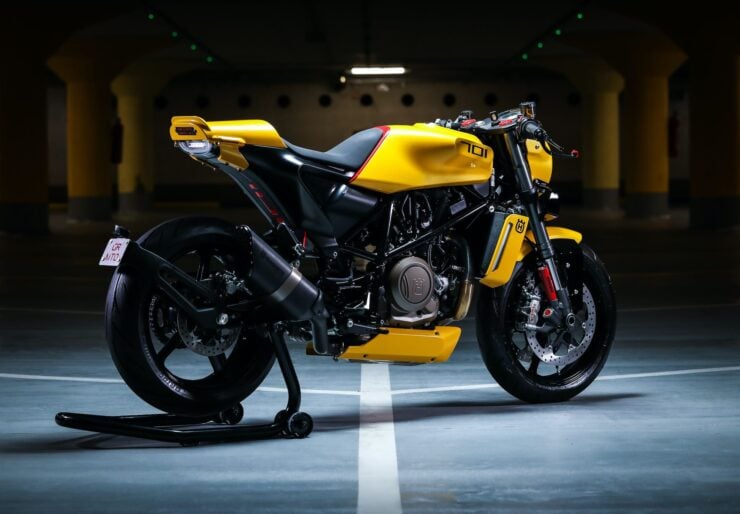 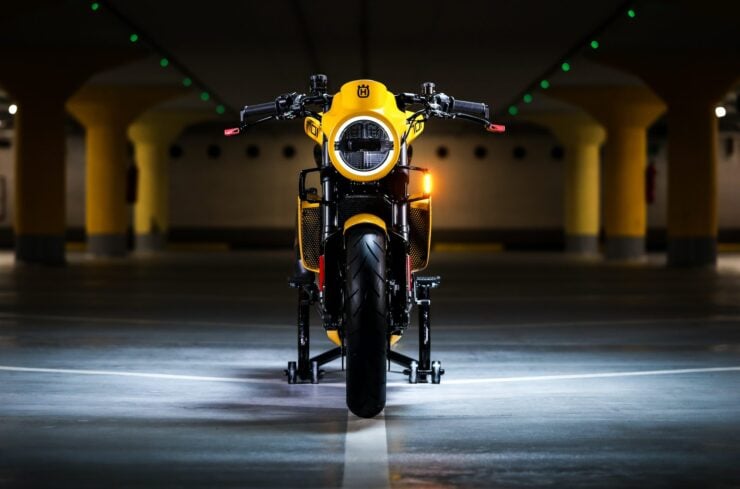 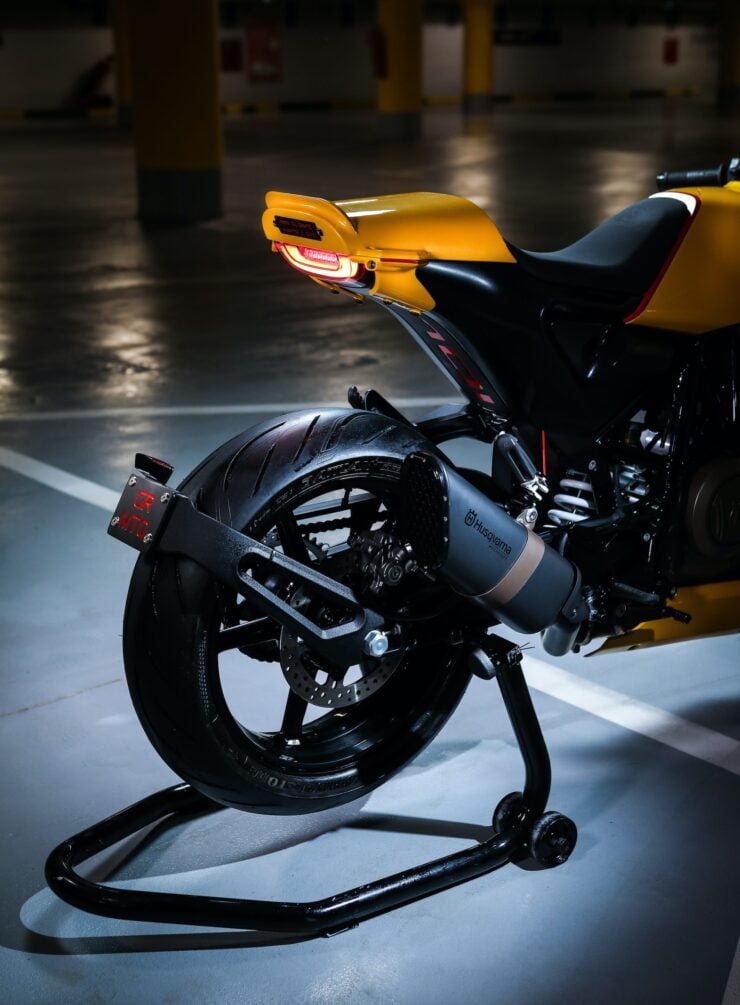 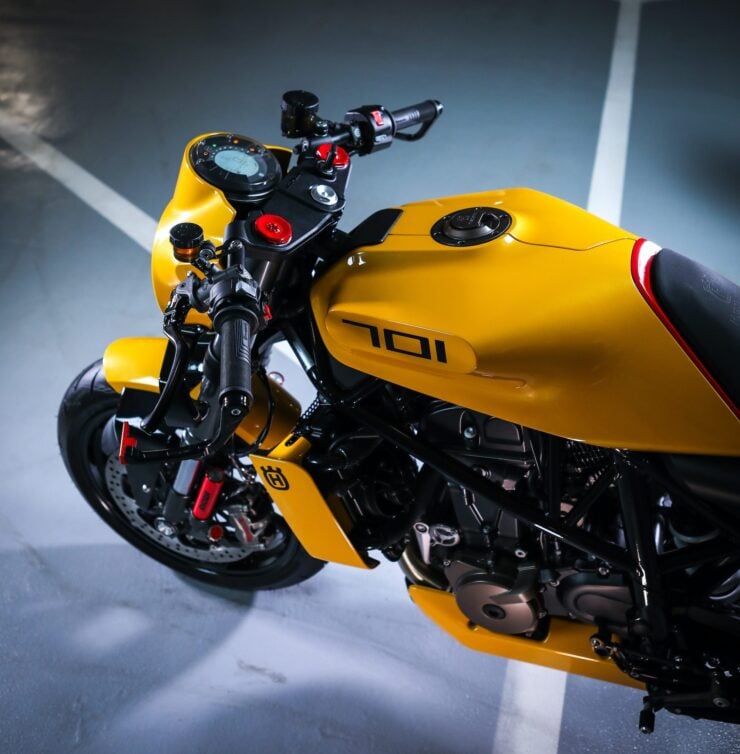 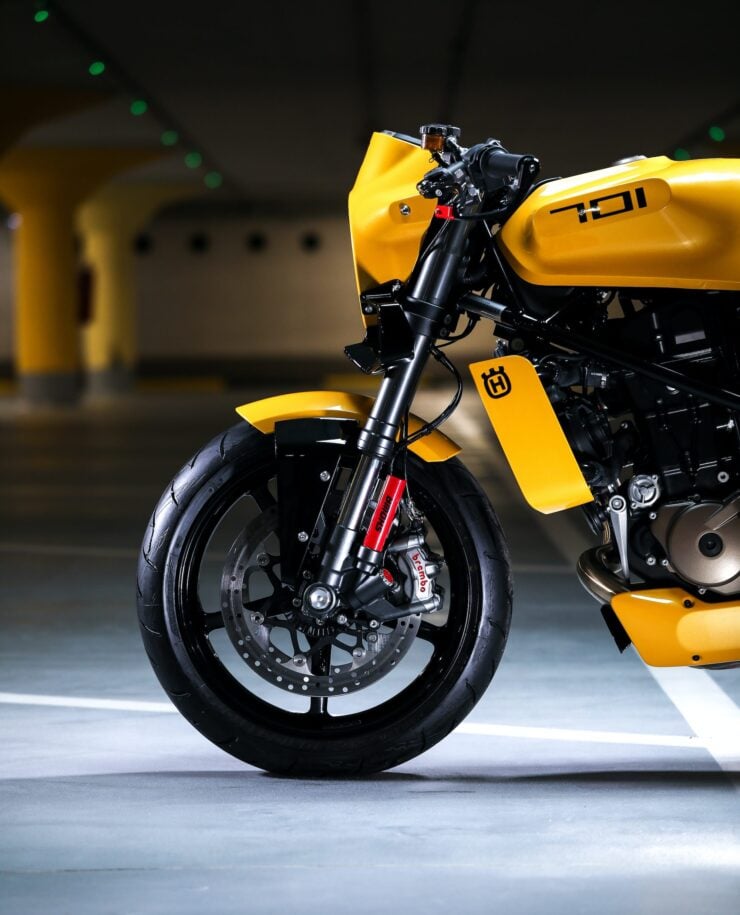 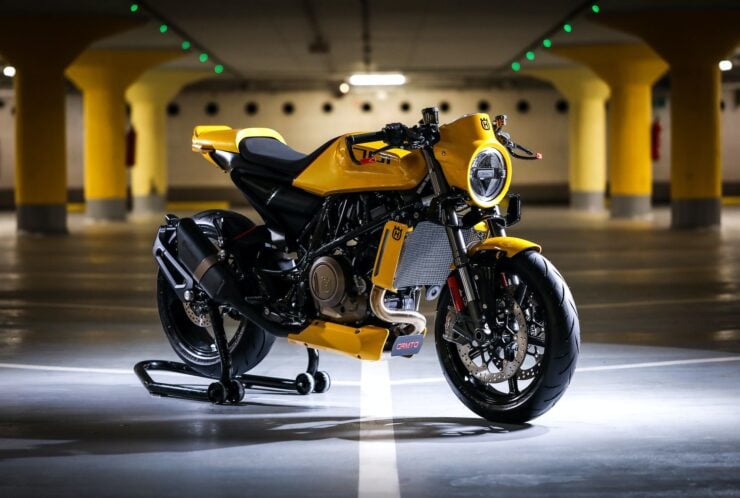 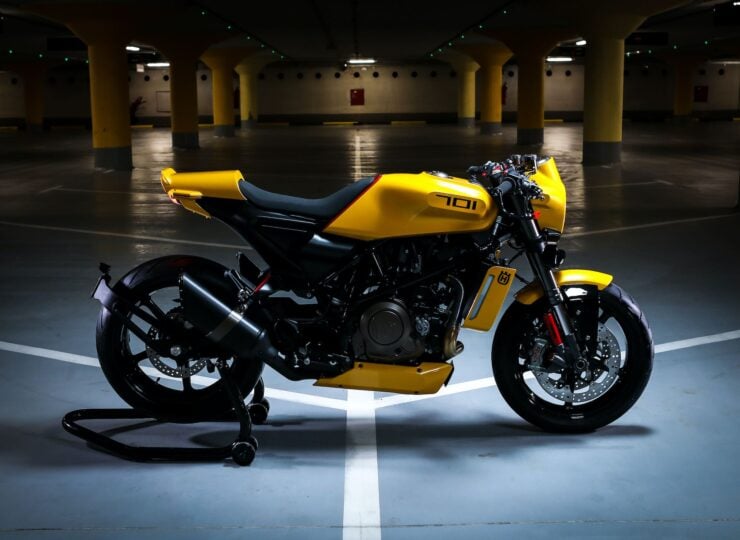