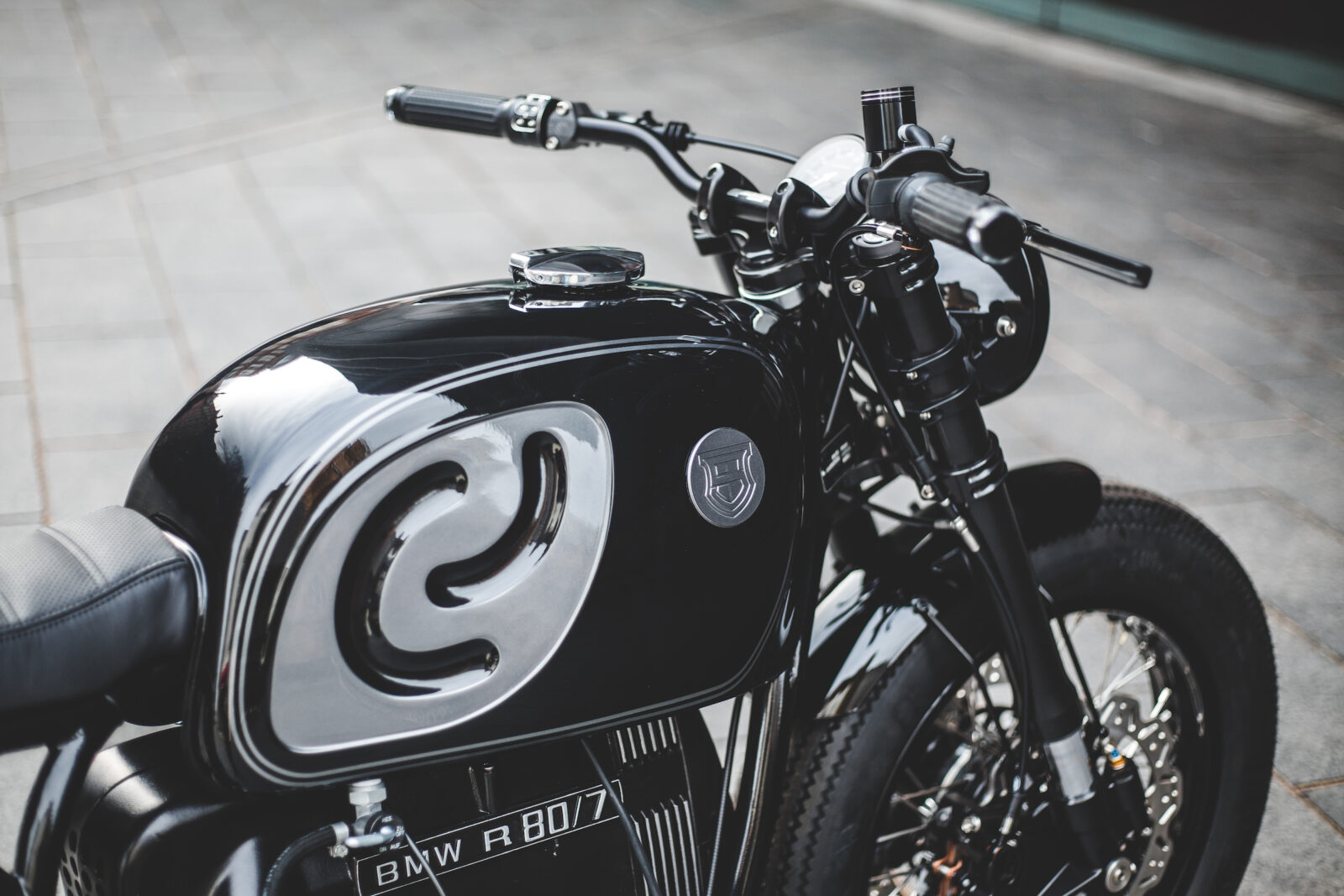 Although you’d never know it looking at the bike now, this custom BMW started out as a police specification BMW R80 TIC (model pictured below) with its full fairing, police lights, and an assortment of lockable pannier boxes.

It’s not that common that we see the R80 TIC getting the custom treatment, largely because there don’t seem to be many around anymore and those we do see are often kept close to original specification by their owners.

Underneath the above mentioned parts the BMW R80 TIC was largely the same as the standard BMW R80 production bike, with its 800cc horizontally-opposed piston engine and 5-speed transmission which produces approximately 50 hp at 6,500 rpm with 42 lb ft pf torque at 5,500 rpm. The TIC was based on the R80/7 which was in production from 1981 until 1983.

This build started as many of them do, with a client who had a rough approximation of what they wanted – a classic BMW in the Sinroja style with a mixture of classic and modern details. Interestingly the client is also a fan of classic Range Rovers and Land Rovers, which would also have an influence on the build.

The BMW R80 TIC that was sourced for this build was a barn find of sorts, requiring it to be fully disassembled and stripped back to bare metal before the repainting and reassembly could begin. Unnecessary tabs and brackets were removed during this process – there were plenty of them too due to the fixings that had originally been bolted to the bike for police duties. 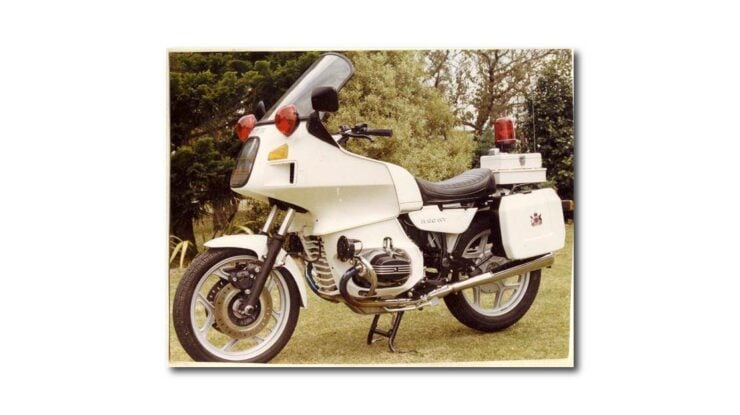 Above Image: This is similar to how the original BMW R80 TIC would have looked during its service life.

The team at Sinroja fabricated a new subframe and they repositioned both set of foot pegs for better ergonomics. A new set of discrete mud guards were fabricated and fitted, along with all new suspension front and back for vastly improved handling – the bike now has Yamaha R6 inverted forks up front with Nitron Suspension cartridges and fully adjustable Nitron rear shock absorbers. Importantly, the front disc brakes from the R6 were preserved which offer notably improved stopping power.

“All classic customs that leave Sinroja workshop get a full crank-up engine rebuild and the R17 was no exception. We stripped the almost 40-year-old powertrain all the way to crank, replacing all key components like big end bearings, chains, guides, pushrod tubes etc, and rebuilding it to better than factory standards. This engine received our 1000cc (originally 800cc) conversion with machined and ported heads and high compression pistons to up the power.”

“All the cases are vapour blasted and painted black with fins polished for great looks. The gearbox and bevel drive got a full rebuild with all fresh bearings, seals, gaskets etc and some unique Sinroja upgrades. Carburettors were also fully rebuilt with bigger jets to help with upgraded engine. The exhausts were fabricated in-house and then finished by Motone’s one-off end cans.” – Birju Sinroja

The bike is now rolling on custom 18 inch wire wheels from Hagon with custom rims and stainless spokes which are fitted with retro tires to complete the look. A brand-new wiring loom from TowzaTronics replaces the aged original wiring, a common source of gremlins on vintage bikes, with all the new electrics being routed through a Motogadget M-Unit Blue which also allows a Bluetooth phone connection and a diagnostic support function.

The black and grey livery draws its inspiration from classic Range Rovers and the seat is upholstered with leather that was sourced from a Land Rover.

“This bike came with a perfect brief in my opinion”, comments Birju “We had pretty much a free reign on what to do. It’s great to be in a place where customers just let you do what you want and have that trust and faith in skills we have. The end result is something we are super proud of indeed. A timeless design and giving rebirth to an old airhead that had been neglected for years in a barn is just a great feeling.” – Birju Sinroja 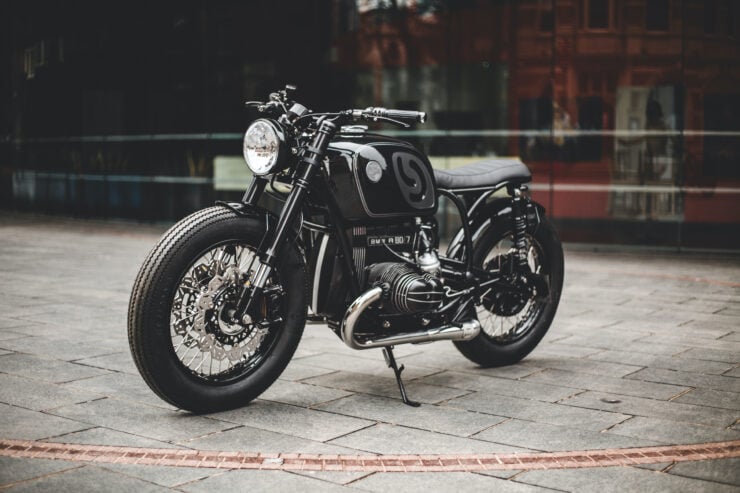 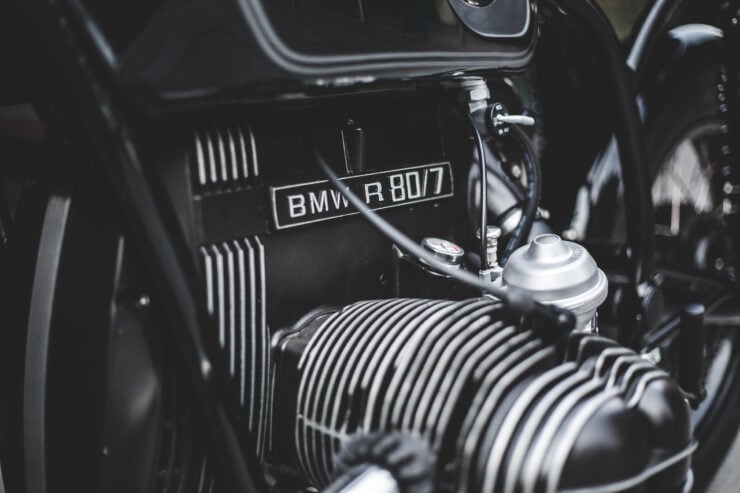 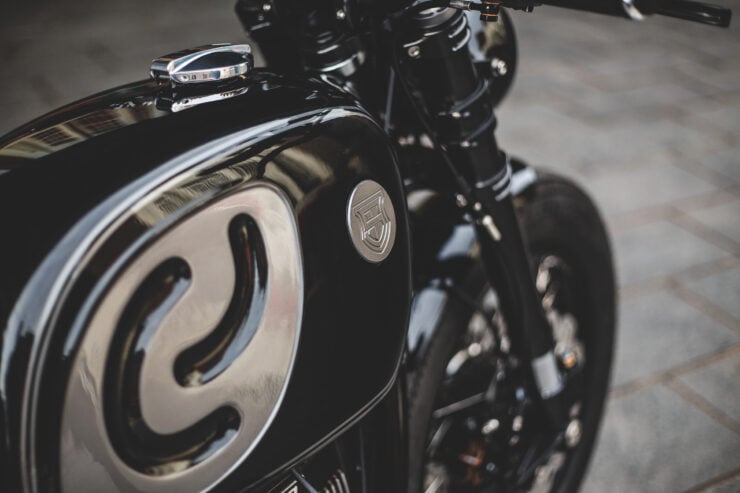 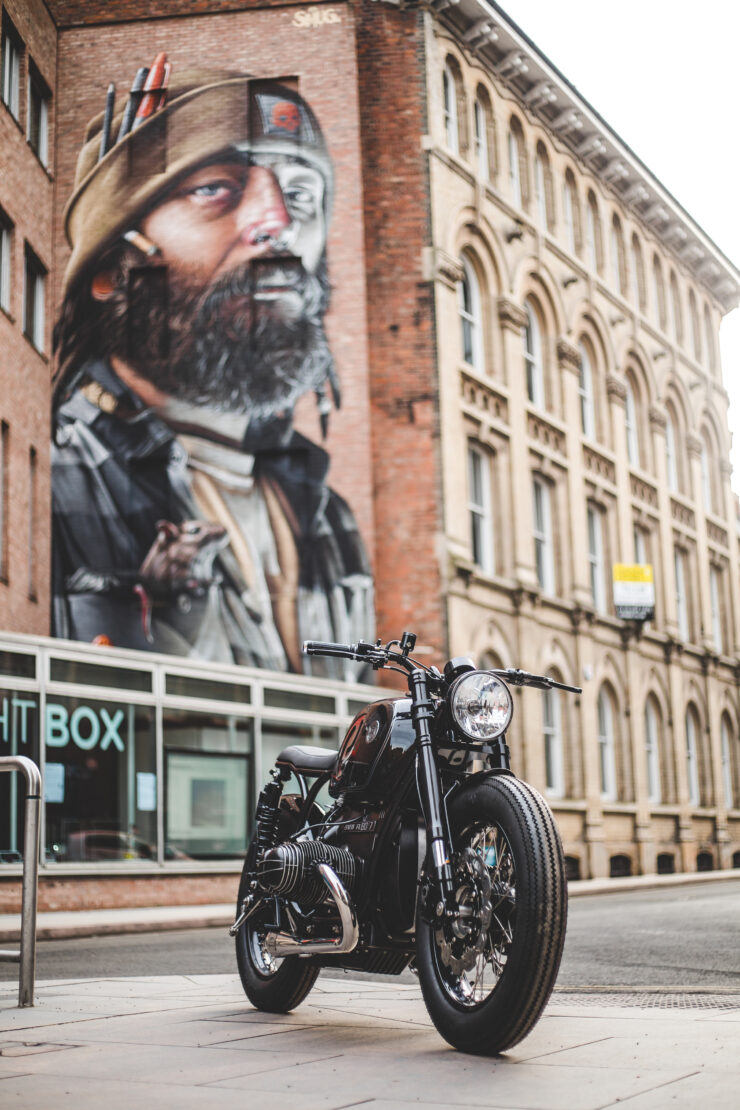 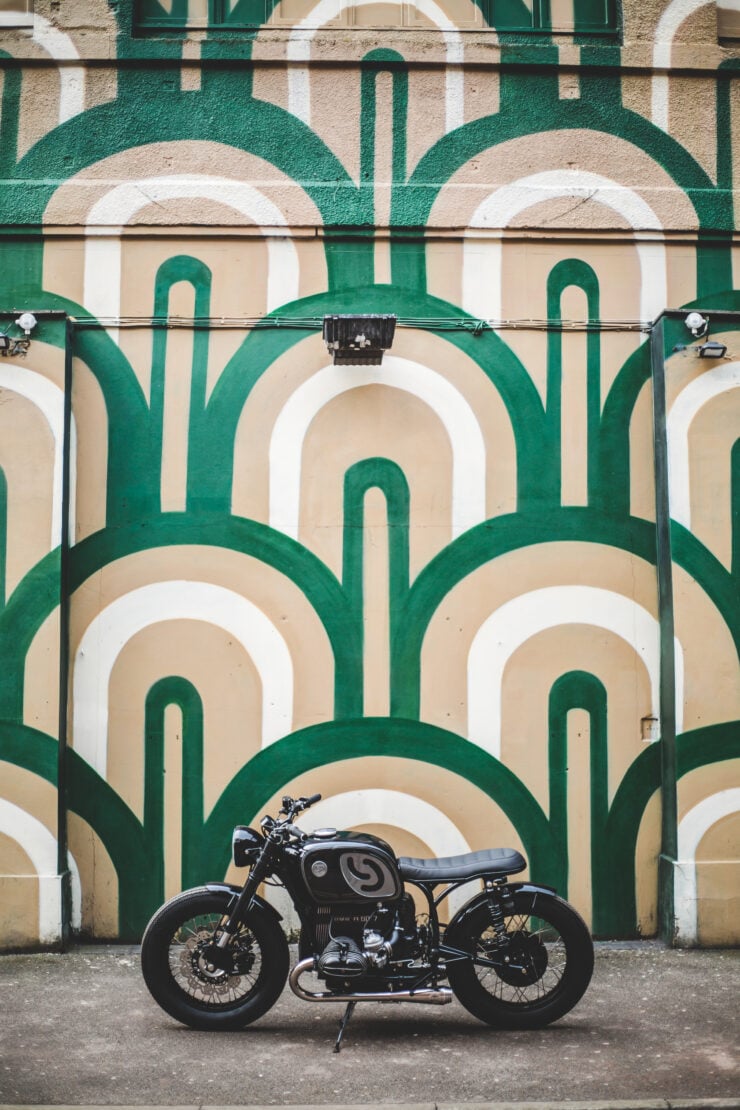 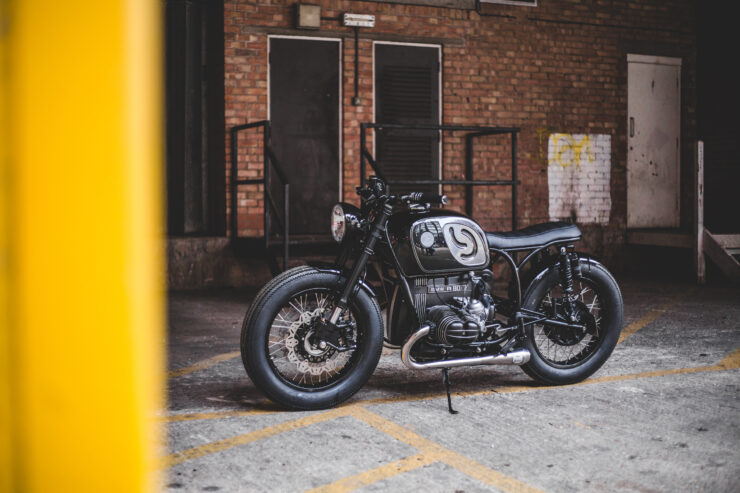 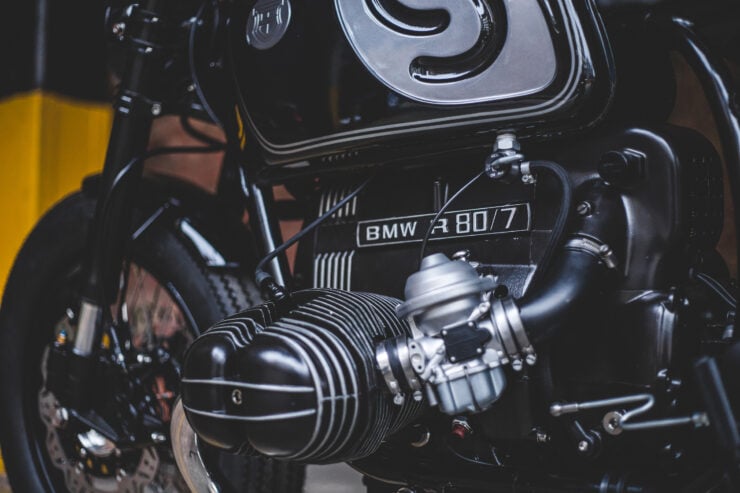 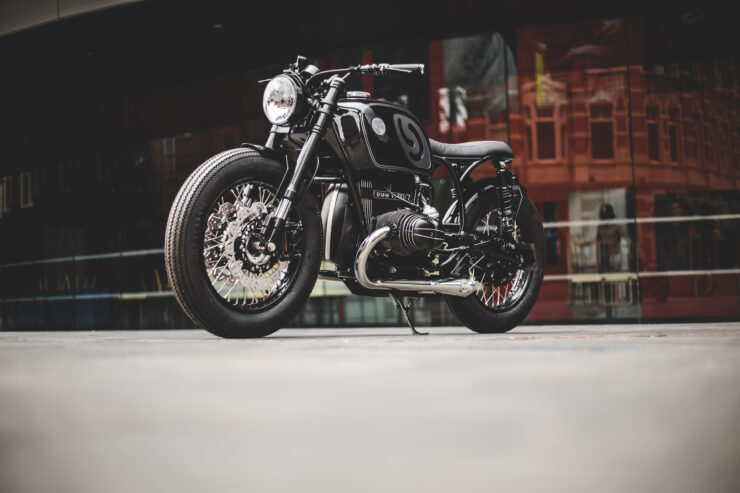 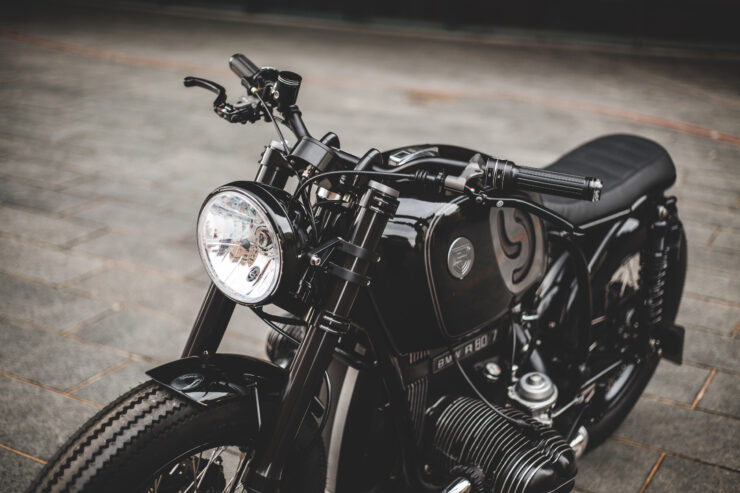 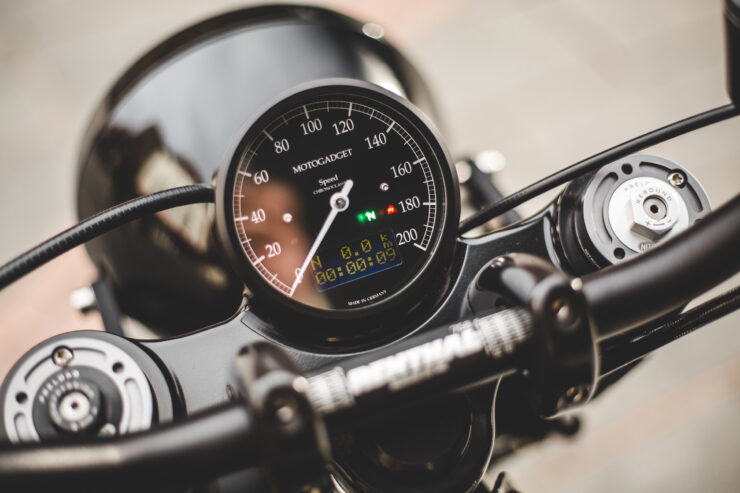 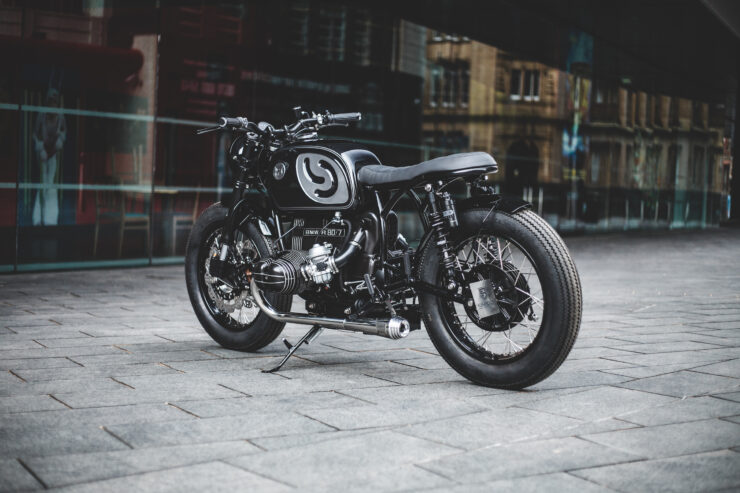 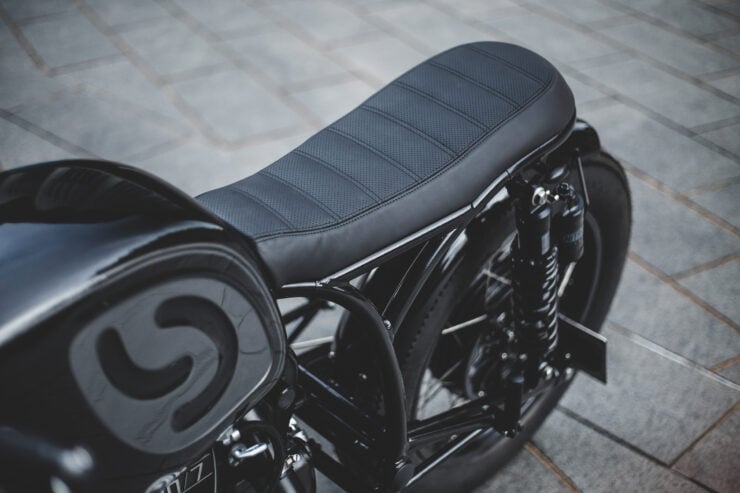 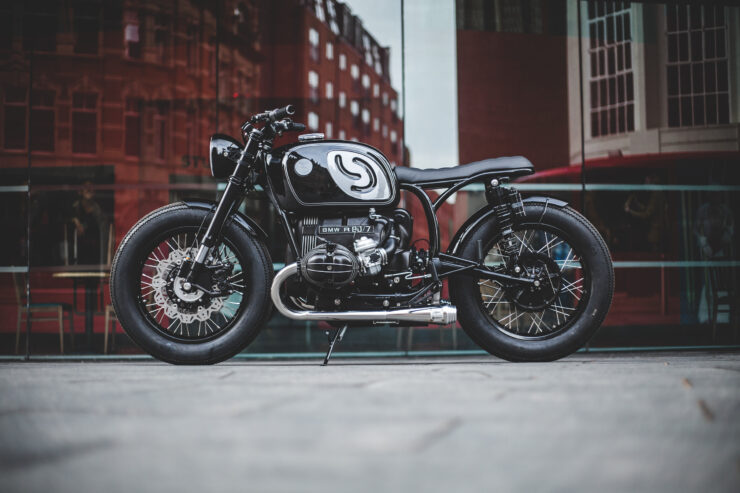 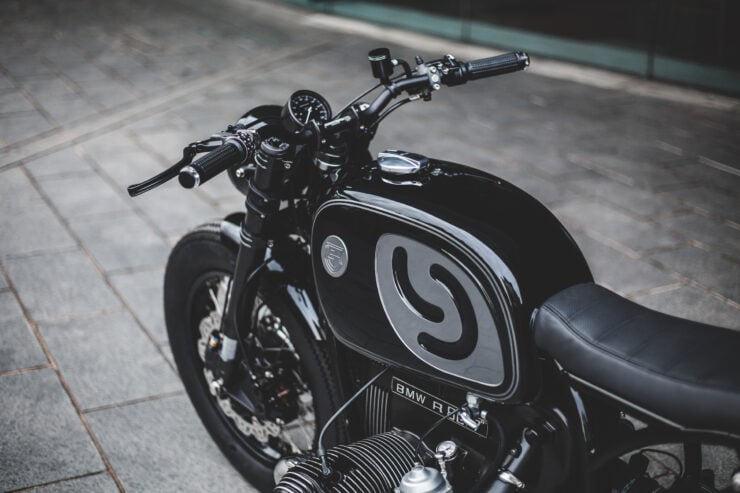 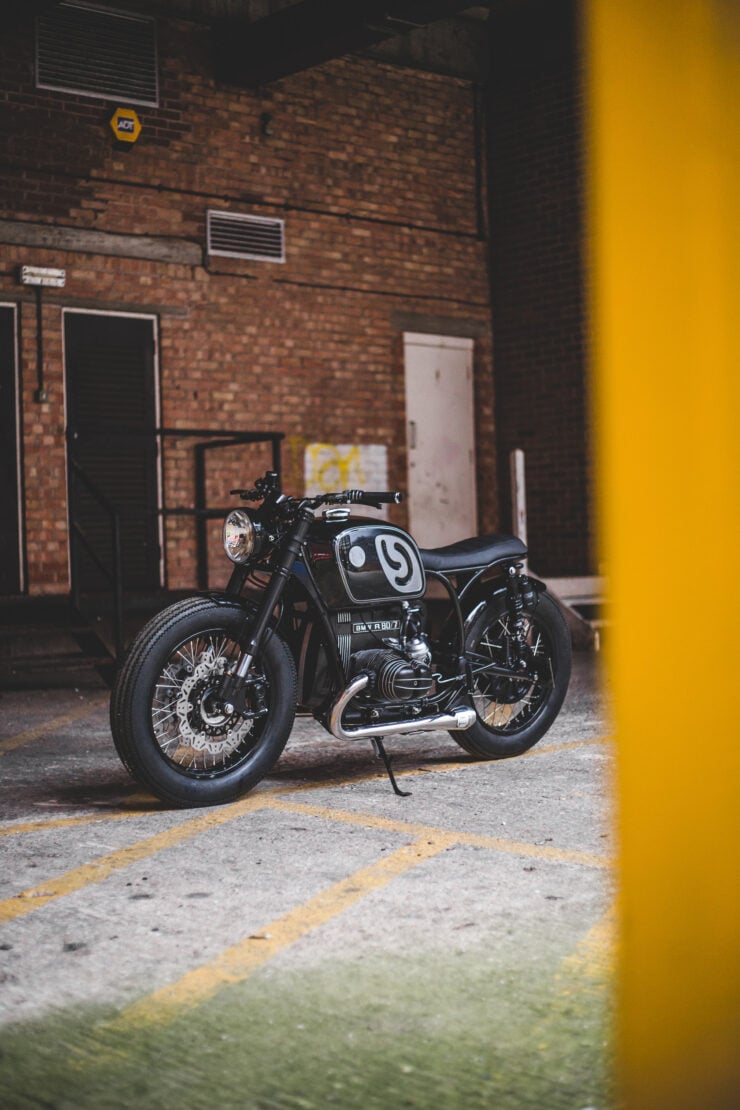