This is the 1974 Alfa Romeo Alfasud Ti Bimotore 4×4 Wainer, it was developed at Alfa Romeo as a potential desert racer for the Italian company, to take part in brutal off-road events like the African Safari Rally.

The idea of having two engines with two transmissions wasn’t entirely new, it had been tried before perhaps most famously with the Citroen 2CV Sahara.

Although this dual-drivetrain concept added a lot of complexity it also resulted in a vehicle that could suffer an engine or transmission failure and keep moving – thanks to the fact it essentially has backups of both.

Above Image: The black twin side air intakes are one of the only external clues that there’s a second engine in the rear.

This failsafe aspect of the design made the layout potentially ideal for motorsport use in races that were famous for killing vehicles. Events like the Paris-Dakar Rally and of course, the African Safari Rally.

The Alfasud Ti Bimotore 4×4 was completed in 1977, it used a 1974 Alfasud Ti 1200 as its starting point which was the higher performance version of the model.

The “Ti” in the model name had possibly been inspired by the similarly named BMW 2002, in the case of the Alfa it stood for “Turismo Internazionale”, or Touring International. The Ti came with a 5-speed transmission and a more powerful 1.2 litre four-cylinder boxer engine with a Weber twin-choke carburetor producing 67 hp.

Above Image: The gauges to the right of the driver display vital stats from both engines separately.

Mantovani and his team essentially brought in another matching engine/tranmission and fitted in the location of the rear seats. Although not simple the task was simplified by the fact that the Alfasud used a flat-four boxer engine with a gearbox mounted to its rear to power the front wheels, so this basic set up was retained and used in the rear.

From the outset the car was designed to be able to operate normally with both engines operating, or with only the front or rear engine operating. The engines used separate starter buttons and separate ignition systems, and each engine’s instruments are displayed on the dashboard so the driver can monitor both at the same time.

The gearboxes are both linked to the same central gear lever, and the both clutches are operated by the same pedal. The goal was to make driving the car as simple as possible, regardless of whether the driver was using both engines or just one.

The car was further modified with two side air intakes, a pair of radiators with electric fans are used to cool the engine, and an oil cooler was added. Both cooling and engine access were taken seriously as the car was meant for desert racing, with this in mind they also fabricated a two-piece removable soundproof cover over the rear engine that can be removed for access.

Above Image: Sadly the car was never raced competitively one or off road, so we’ll never know how well it may have performed.

Sadly the car was never raced, though we can see from historic file photographs (shown below) that the car was tested in heavy snow – a possible indication of the kind of motorsport events the team hoped race the car in.

If you’d like to read more about this unusual car or register to bid you can click here to visit the listing, it’s due to roll across the auction block with RM Sotheby’s on the 13th of February.

Below Three Images: Historic images of the Alfasud Ti Bimotore 4×4 Wainer being tested in heavy snow. 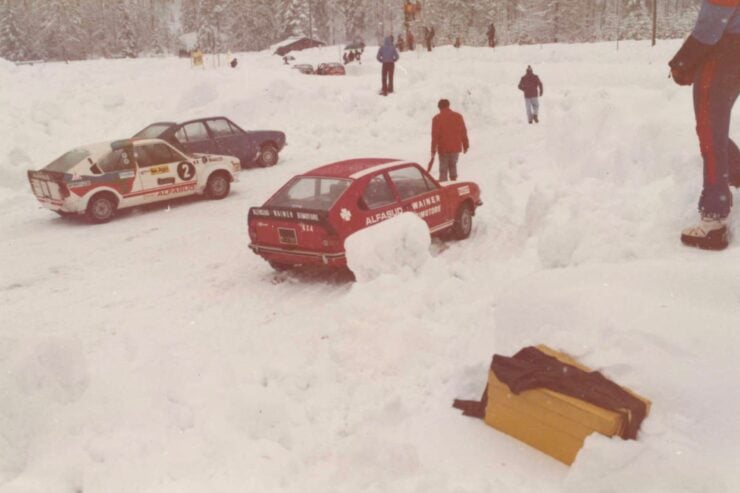 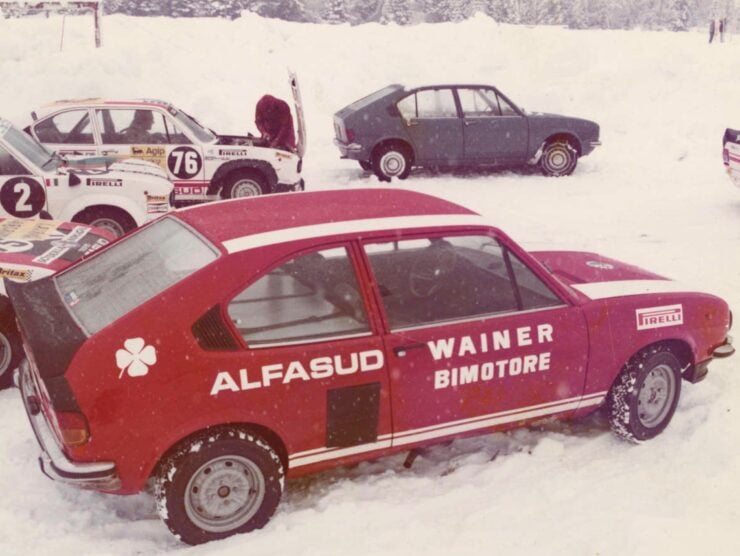 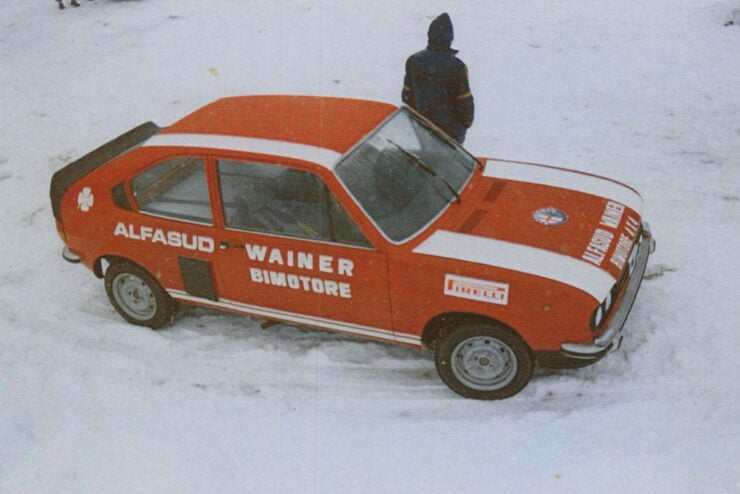