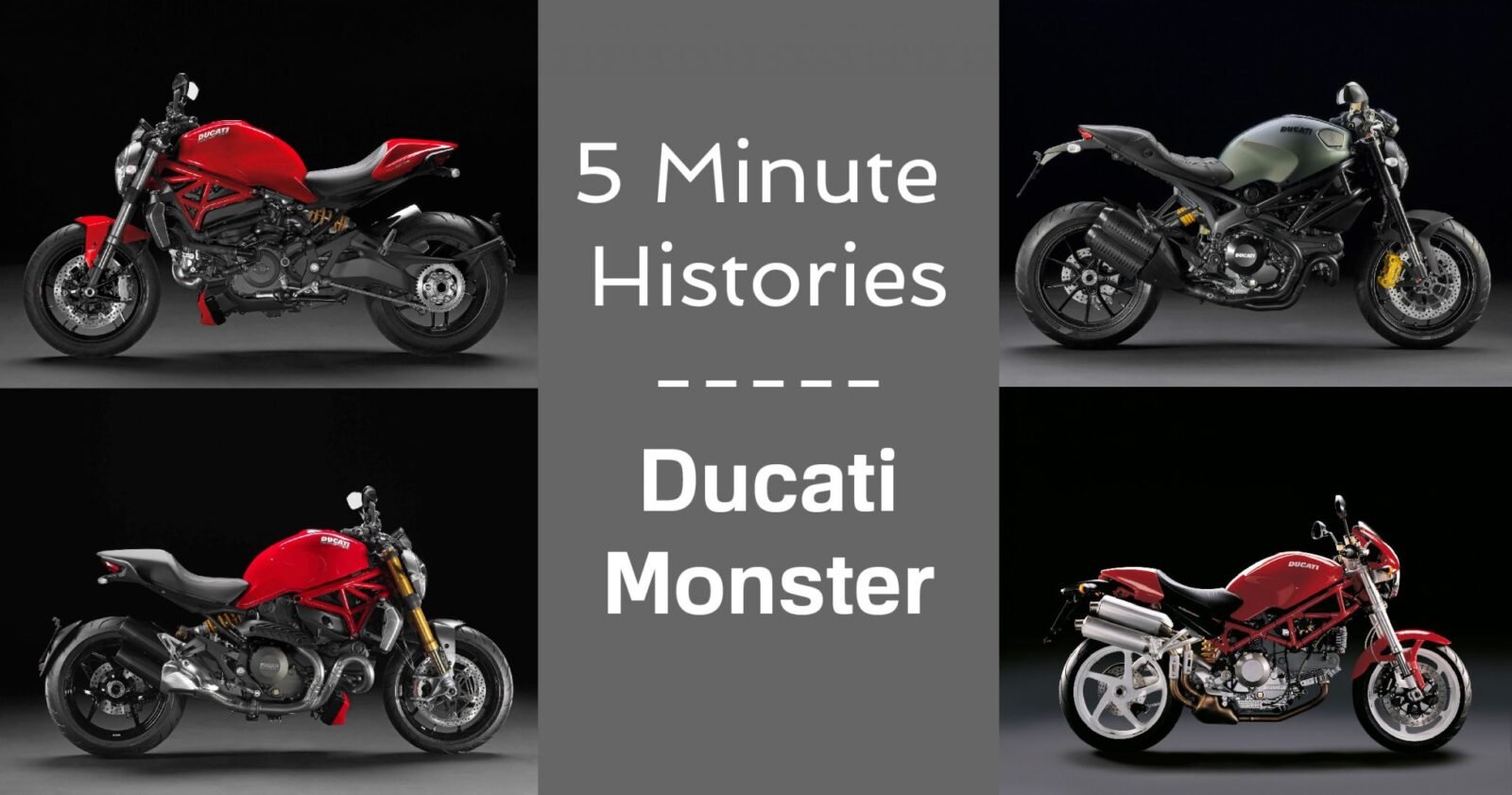 Miguel Galluzzi, the creator of the Monster, once said “In the mind of a motorcyclist you need a gas tank, a seat and a motor.” Galluzzi was working for Honda back when the seed of the idea that would become the Ducati Monster appeared in his mind. He was looking at a picture of a Honda superbike with its full aerodynamic fairings and he imagined it with the fairings removed, a bike reduced to its basic essentials.

It was an idea that would not have fitted with Honda’s product line back then but later when Galluzzi moved to Ducati he was in a design environment where there was creative room for things that initially seem oddball. Ducati Technical Director Massimo Bordi wanted a cruiser style motorcycle created, one that would lend itself to after market customising and this fitted with the original idea Galluzzi had. So Galluzzi cobbled together a prototype bike around his initial “bare bones” motorcycle idea using mostly off the shelf Ducati parts and showed it to management.

Even Miguel Galluzzi was a little surprised by management’s reaction to his prototype.

They first asked “Are you bringing the rest of the bike later on?”. He gently broke the news to them that actually there was no “rest of the bike”, that this was it. What happened next would not be likely to happen in a risk-adverse Japanese company. With typically Italian spirit the management said “Let’s do it and see what happens.” Thus the Monster was born – it went on to become the backbone model that saved Ducati from financial disaster and made the name Ducati Monster a household name in motorcycling circles.

The initial idea for the “Il Mostro” came to Miguel Galluzzi in the 1990’s. He wanted to create a bike that would not date, just like the Porsche 911, and the classic Land Rover have not dated but instead have a timeless quality about them. Galluzzi firmly believed that “When a design is a good design, it doesn’t have time.” In order for that to be true the design needs to shun ideas of fashion or trendiness and instead just focus on getting the form and function right – perfect in fact. 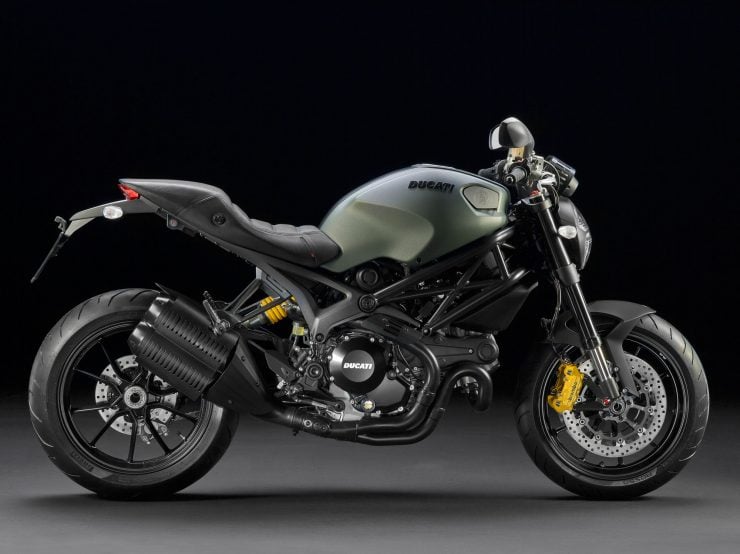 Ducati’s first Monster, the Monster 900, made its debut at the Cologne Motorcycle Show in 1992. Its no nonsense tubular steel trellis frame identified it as pure bred Ducati, and its minimalist styling set it apart as a two wheeled motorised work of contemporary art. It somehow managed to look industrial, yet gorgeous. In some respects it created a new genre of motorcycle called the “Naked Bike”, but it also resurrected the fifties and sixties bare bones style motorcycles from the likes of Norton and Triumph, and it did it without the oil leaks, well, mostly without the oil leaks. It has been said of the Ducati Monster that if the 1953 movie “The Wild One” was being made in the 1990s then Marlon Brando would be riding a Ducati Monster and not a Triumph.

The concept of the Ducati Monster was to build a bare bones motorcycle on a Ducati steel tubing trellis frame and powered by a classic Ducati “L” twin desmodromic engine. Ducati’s laying the V twin down in an “L” shape so that the front cylinder faces almost horizontally forwards and the rear cylinder at 90° standing near upright ensures that both cylinders are getting good airflow over them. The Monster was aimed at style conscious buyers who would tend to be urban people. The seating was made quite upright and the handlebars high enough to make that upright seating position comfortable and wide enough to provide a feeling of control.

From its 1993 beginnings the Ducati Monster began to morph into Monsters of different stripes. The M900 of 1993 was followed by the M600 of 1994, a lighter and slightly less powerful creature popular with riders who wanted a less powerful Monster that was lively, easy to ride, and enormous fun. Also in 1994 Ducati created the M400 specifically for markets where the tax system penalised larger capacity motorbikes such as Italy, Japan, and Singapore, and also Indonesia, the Philippines, Taiwan, and Thailand. In 1996 Ducati decided to bridge the gap between the M900 and the M600 with the M750 providing a Monster for every taste. 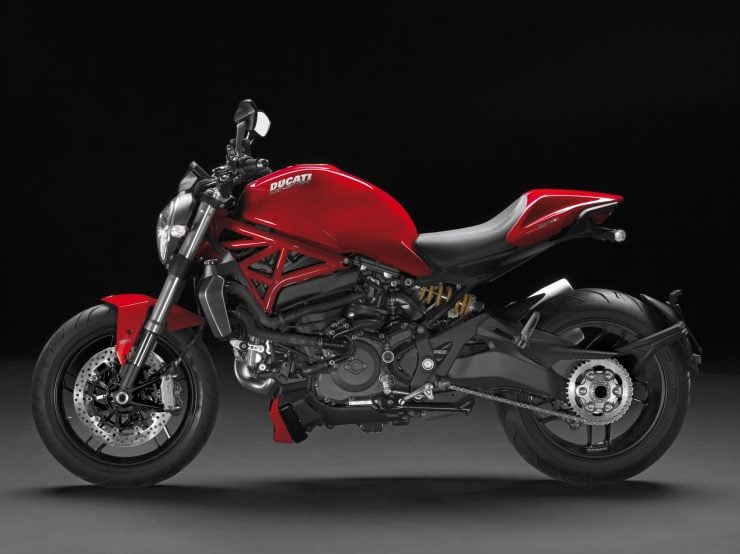 In 2005 the S4RS Testastretta appeared with a double valve 999 Superbike engine, Öhlins suspension and radial front brakes. This was indeed a serious street Monster. Ducati did not just keep adding more and more power and complexity to the Monster line-up however but in 2005 also added the S2R Desmodue to the Monster stable with a less complex two valve Desmodronic engine. These were the S2R 800 and S2R 1000 with two-valve 800cc and 1000cc engines.

2008 was the year of the Monster 696 which was released in April of that year. This little Monster had an air-cooled engine that boasted the highest power per cc of capacity of any previous air-cooled Ducati engine. It didn’t take long for that engine to grow and by September of that year the Monster 1100 made its appearance. The Monster 696 broke all sales records for Ducati in 2009 selling more than 12,000 bikes. Previously Ducati’s highest annual sales for a single model had been in the order of 10,000 units.

The Ducati Monster 796 appeared in 2010 and the Monster 1100 S Evo superseded the 1100 and 1100S. This bike saw the introduction of the Ducati Safety Package (DSP) as a standard feature. The Ducati DSP provides ABS and Ducati Traction Control. The following year Ducati created the 795 for the Asian market. This bike is a combining of the light 696 frame with the 803cc engine from the 796.

For 2016 the Monster line sees a monster indeed with the introduction of the most powerful Ducati Monster ever to see the light of day, the Monster 1200 R which has a 160hp engine and is a bike that might well have tamed even Marlon Brando’s wild side. Suffice to say it is noticeably more powerful than the Triumph he rode in “The Wild One”.

The Ducati Monster motorbikes are still in production and still providing a comfortable upright experience with the ability to morph from a mild mannered Dr. Jekyll personality to a hair raising eyeball popping Mr. Hyde monster. They are a bike that appeals to the enthusiast and to the rider that just wants to have fun, and they work remarkably well as a daily rider that can be taken out onto quiet country roads on the weekend – or the local race track.

The Monster is now the most common Ducati in the world by quite a margin, it’s been a best-selling model for over 20 years now – and there are very few who would argue with me when I say it’s a modern classic of the highest order. 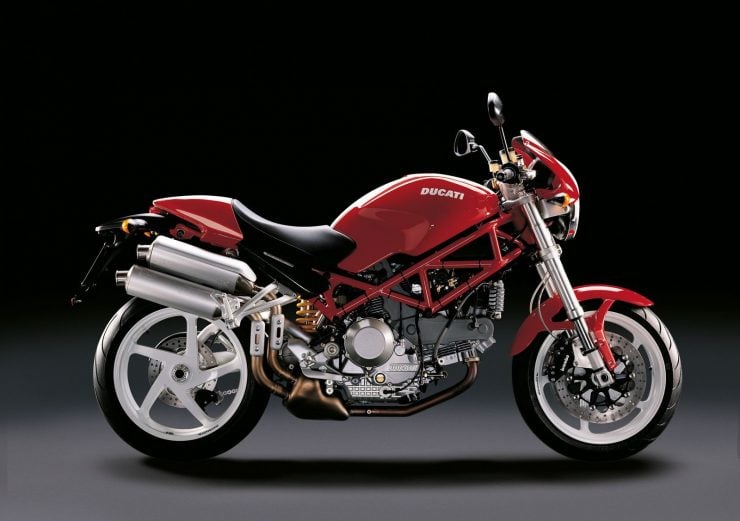 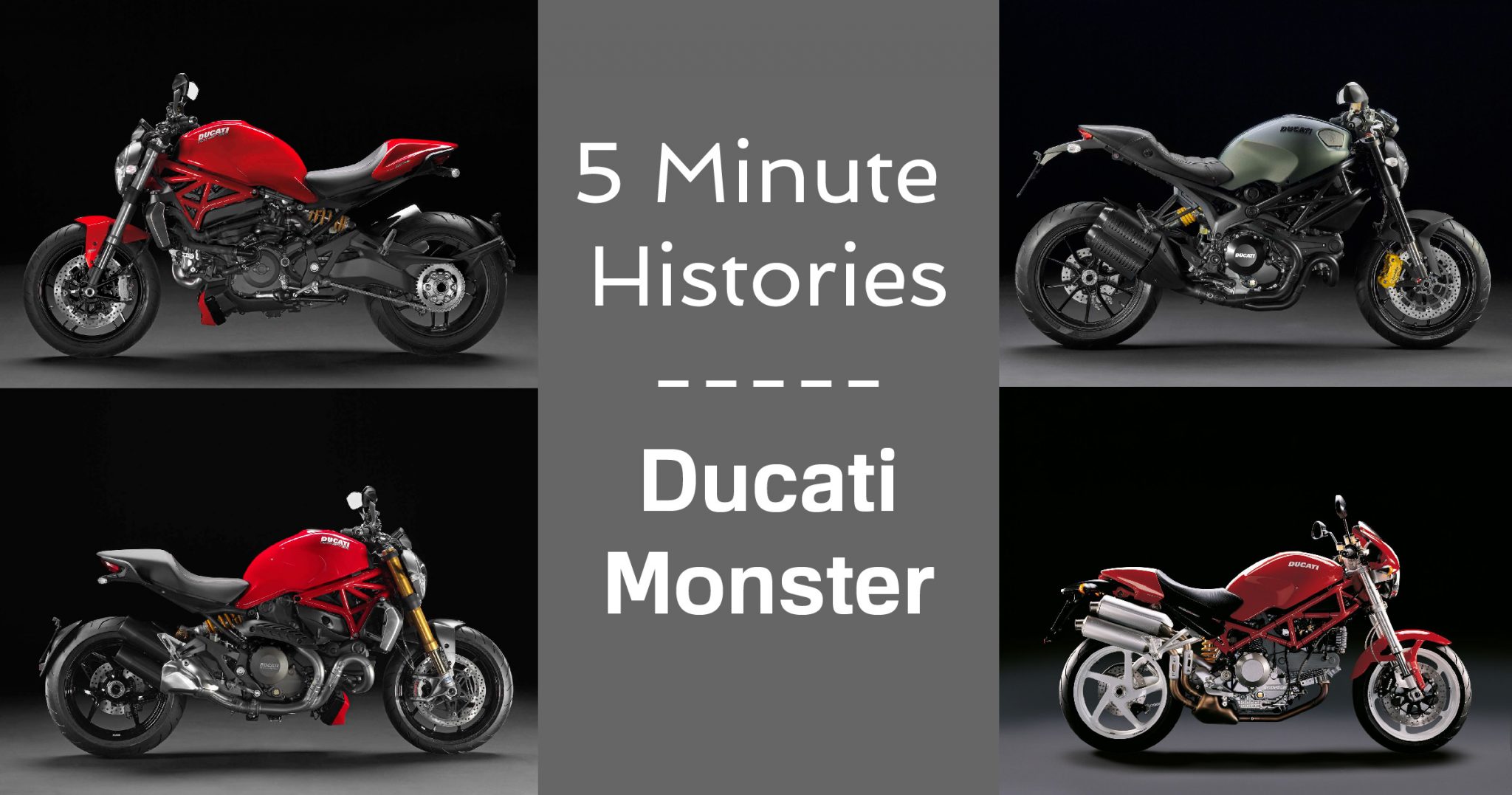