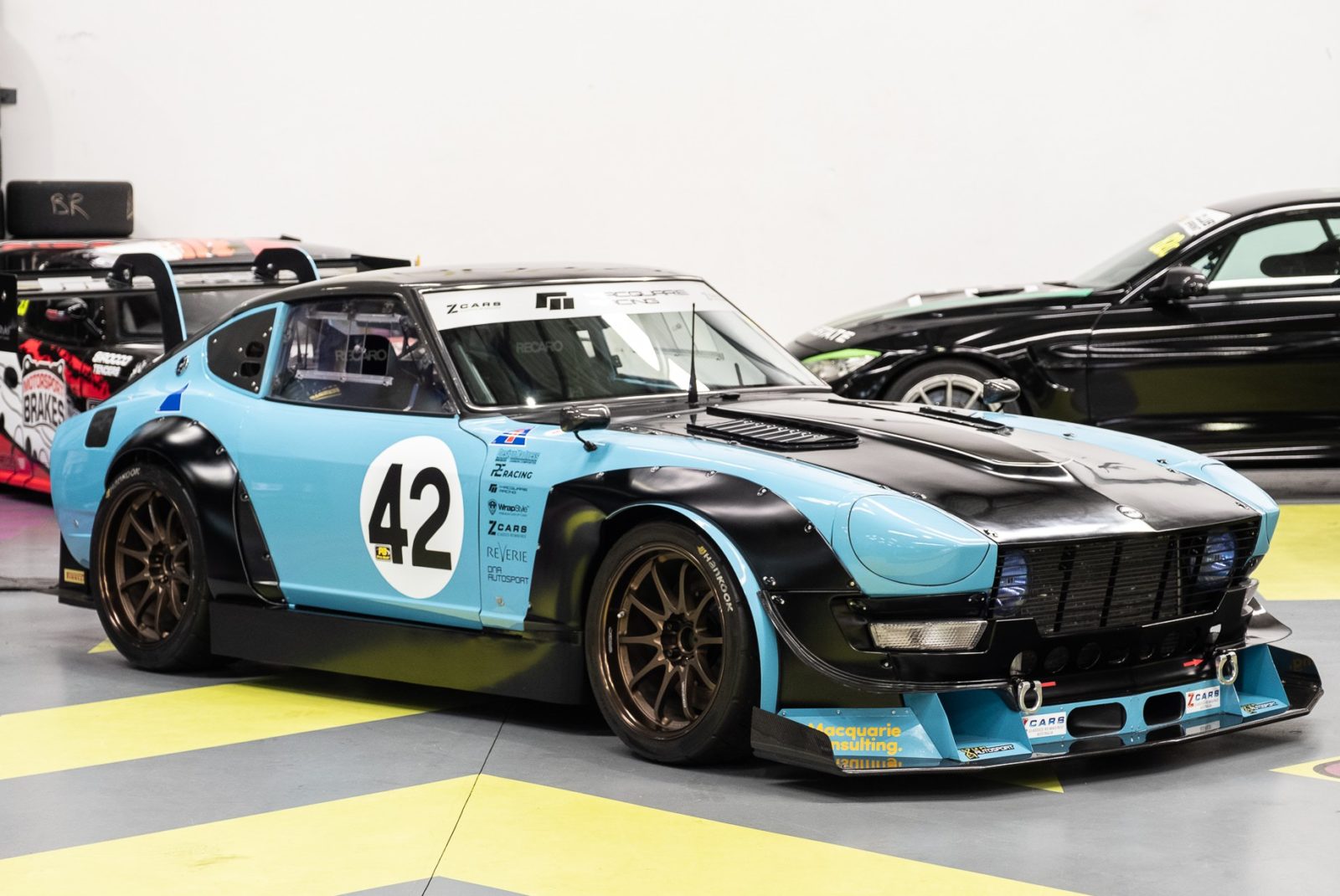 This is unquestionably one of the most extreme examples of the Datsun 240Z that we’ve ever featured on Silodrome – it has a slew of upgrades, and it’s now powered by a turbocharged RB26 Nissan Skyline GT-R engine.

This 240Z was recently built in Sydney, Australia and it’s yet to be raced. Shakedown testing is complete and it now has just 80 kms on the odometer. It’s now been listed for sale online, and the lucky new owner will be the first to drive it in anger.

When it was introduced in 1969 as a 1970 model, the Datsun 240Z proved almost immediately popular in the markets where it was offered. It combined the sports car styling of the era combined with an affordable price tag, and perhaps most importantly, it was fun to drive. 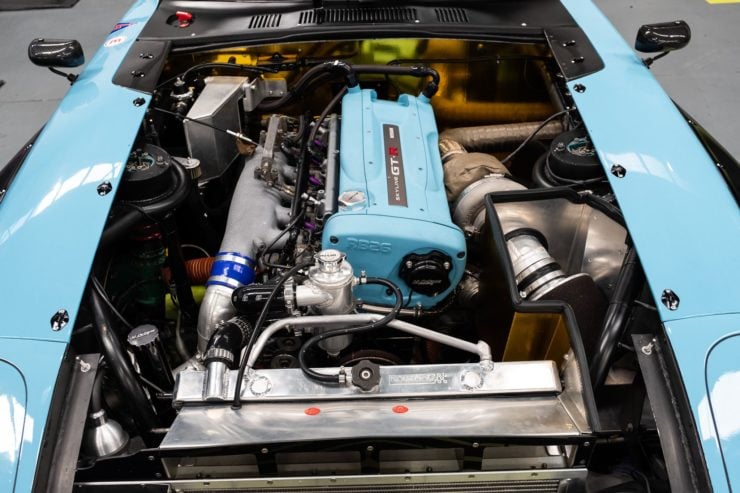 Power was provided by the Datsun L24 straight-six, a 2.4 liter engine with a single overhead cam operating two valves per cylinder. Power was good by the standards of the time, with 151 bhp at 5,600 rpm and 146 ft lbs of torque at 4,400 rpm.

Power was fed back to the rear wheels via either a four of five-speed manual transmission, or through the far rarer (optional) three-speed automatic. Suspension was independent front and rear, with MacPherson struts and an anti-sway bar up front, and Chapman struts in the rear.

Rack and pinion was standard on all 240Zs and the car was fitted with front disc brakes and rear drums, a fairly standard arrangement for the era. With a top speed of 125 mph (201 km/h) and a 0 – 60 mph time of 8.0 seconds, the performance received glowing reviews in the motoring magazines of the time.

The Racing History Of The 240Z

The 240Z proved immediately successful in the world of motorsport, it won the SCCA C Production national title in 1970 and 1971. 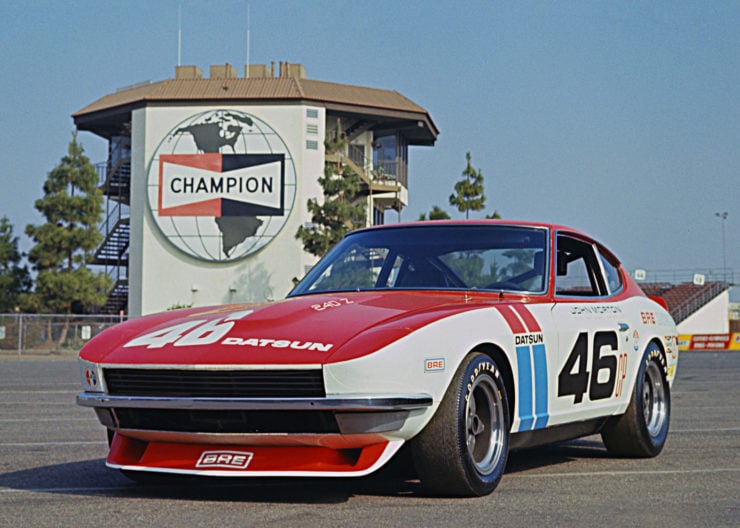 The Datsun 240Z proved successful in motorsport, surprising many when it went on to win the SCCA C Production national title in 1970 and 1971. Image courtesy of Nissan.

A slew of other race wins followed on tracks and rally stages around the world, including a popular win in the 1973 East African Safari Rally with driver Shekhar Mehta and co-driver Lofty Drews in the cockpit.

The racing successes of the 240Z and the Datsun 510 were a catalyst for the rise of the Japanese import performance parts industry – now a global multi-million dollar industry.

The 240Z you see here has been thoroughly rebuilt for race track dominance.

The original 2.4 liter Nissan engine has been removed and replaced with an all new drivetrain headed by a turbocharged RB26 Nissan Skyline GT-R engine mated to a six-speed sequential PPG transmission. 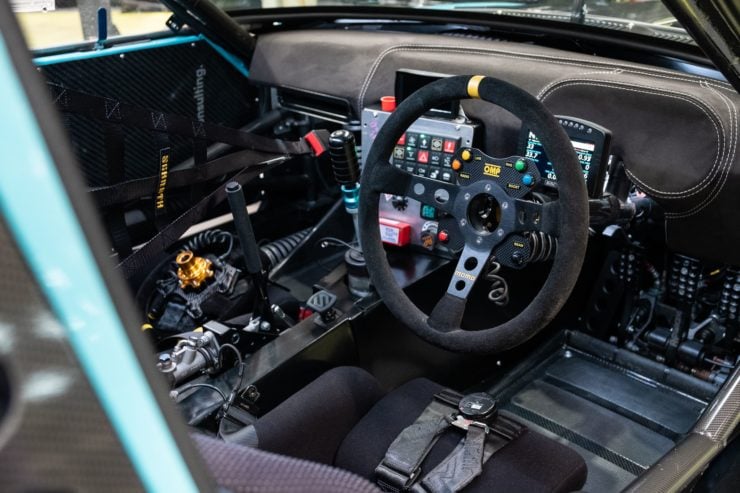 The interior has been fully rebuilt for racing, it has twin Recaro seats with harnesses, a full roll cage, a Momo steering wheel, a hydraulic handbrake, a sequential shifter, a fire suppression system, and OMP switch gear.

Many of the original steel body panels have bee removed and replaced with fiberglass and carbon fiber panels, and a Pandem Rocket Bunny wide body kit has been fitted.

It’s now riding on a set of 18 inch bronze RAYS alloy wheels fitted with Hankook Z221 tires, and it has race-spec Alcon disc brakes fitted front and back. Fully adjustable coilover suspension has also been fitted at each end, and the car has been professionally corner weighted.

The interior now has two racing Recaro seats with harnesses fitted, as well as a full roll cage, a fire suppression system, a hydraulic handbrake, a Momo steering wheel, and OMP switchgear.

The car is now being offered for sale in a live online auction by Collecting Cars out of Sydney, Australia. If you’d like to read more about it or register to bid you can visit the listing here. 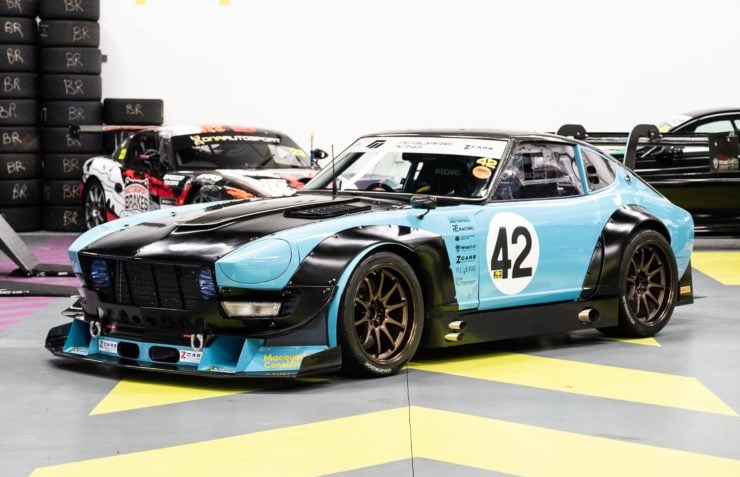 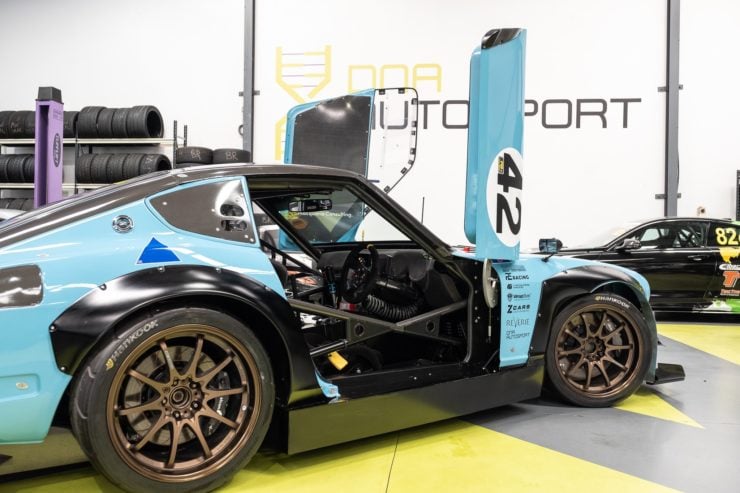 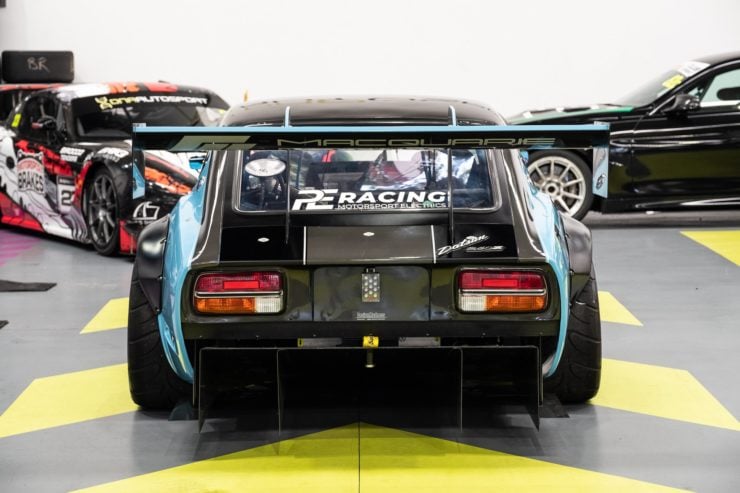 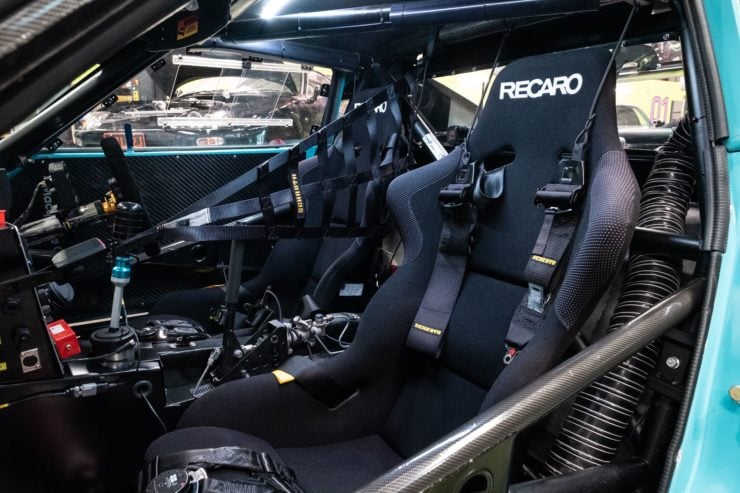 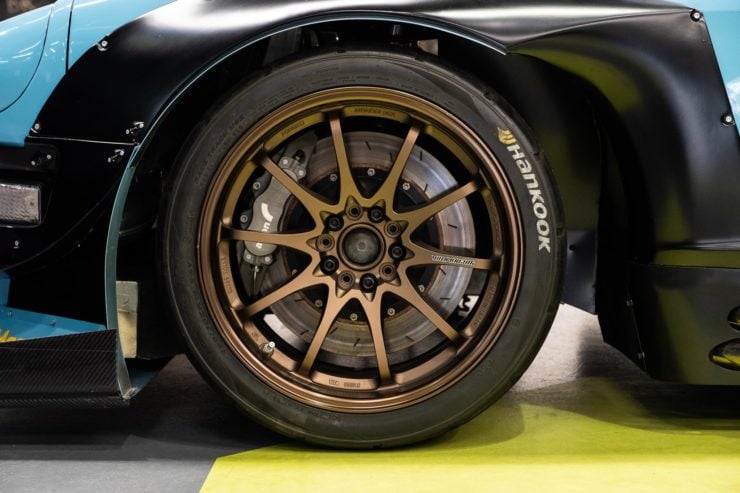 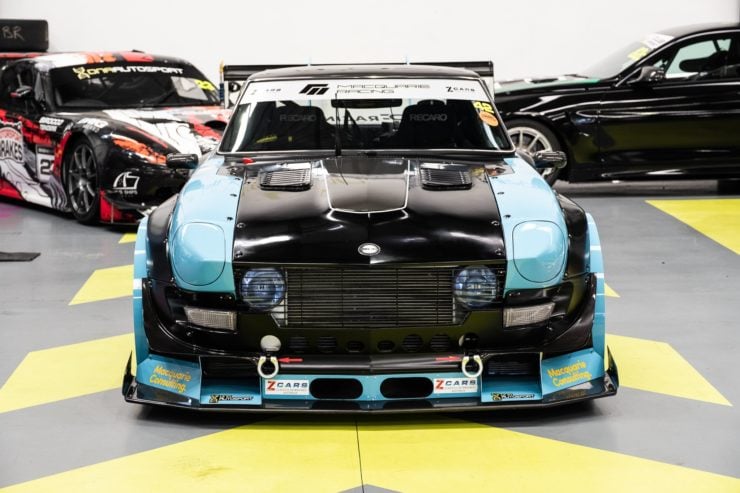 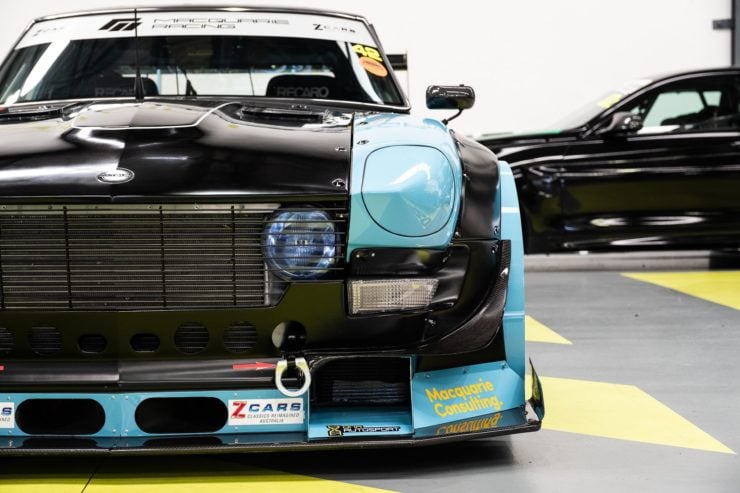 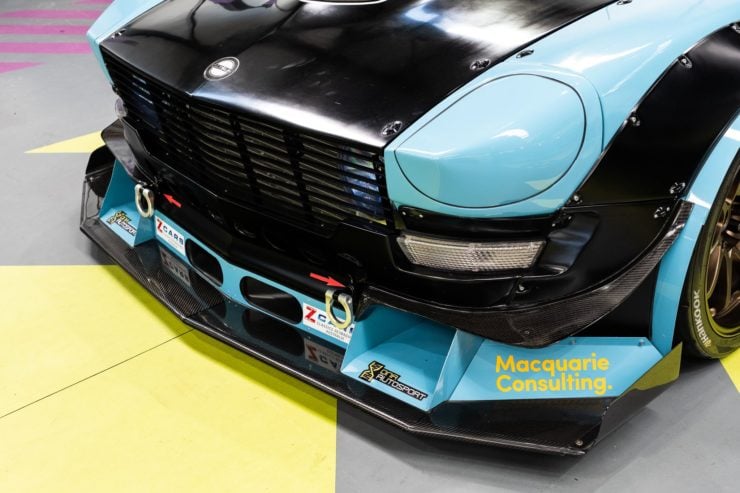 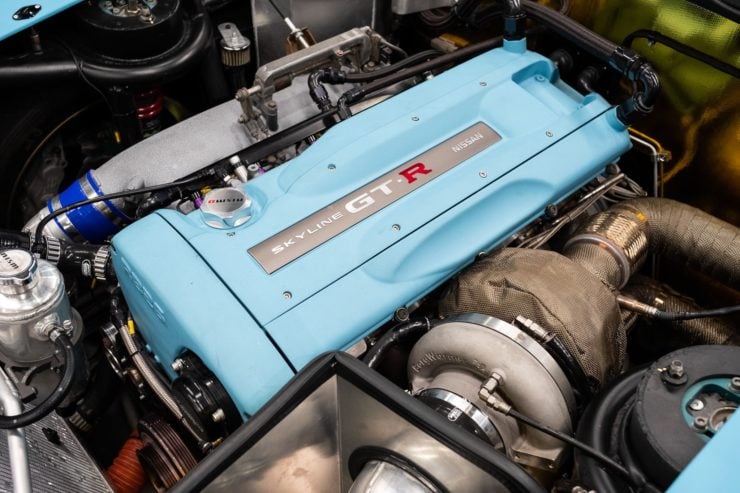 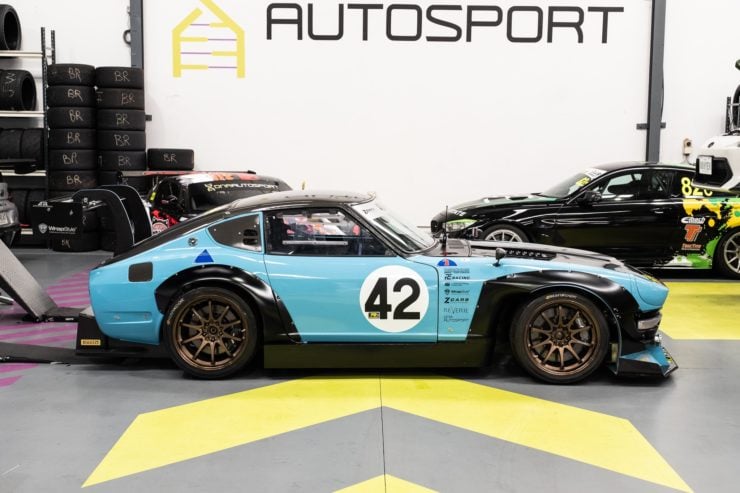 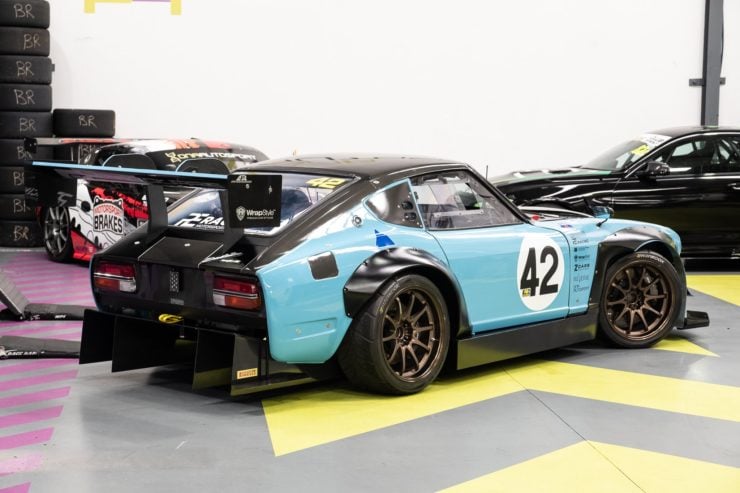 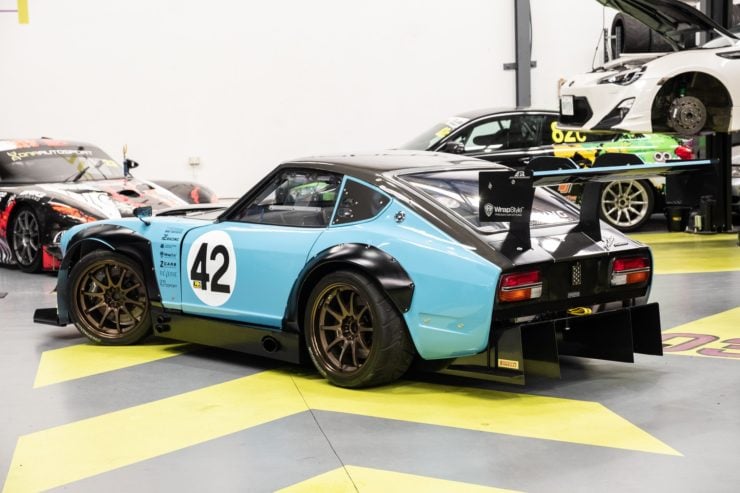 The Gordon-Keeble was the fastest four-seat car in Britain when it was released in 1964, with a top speed of 160 mph and a…