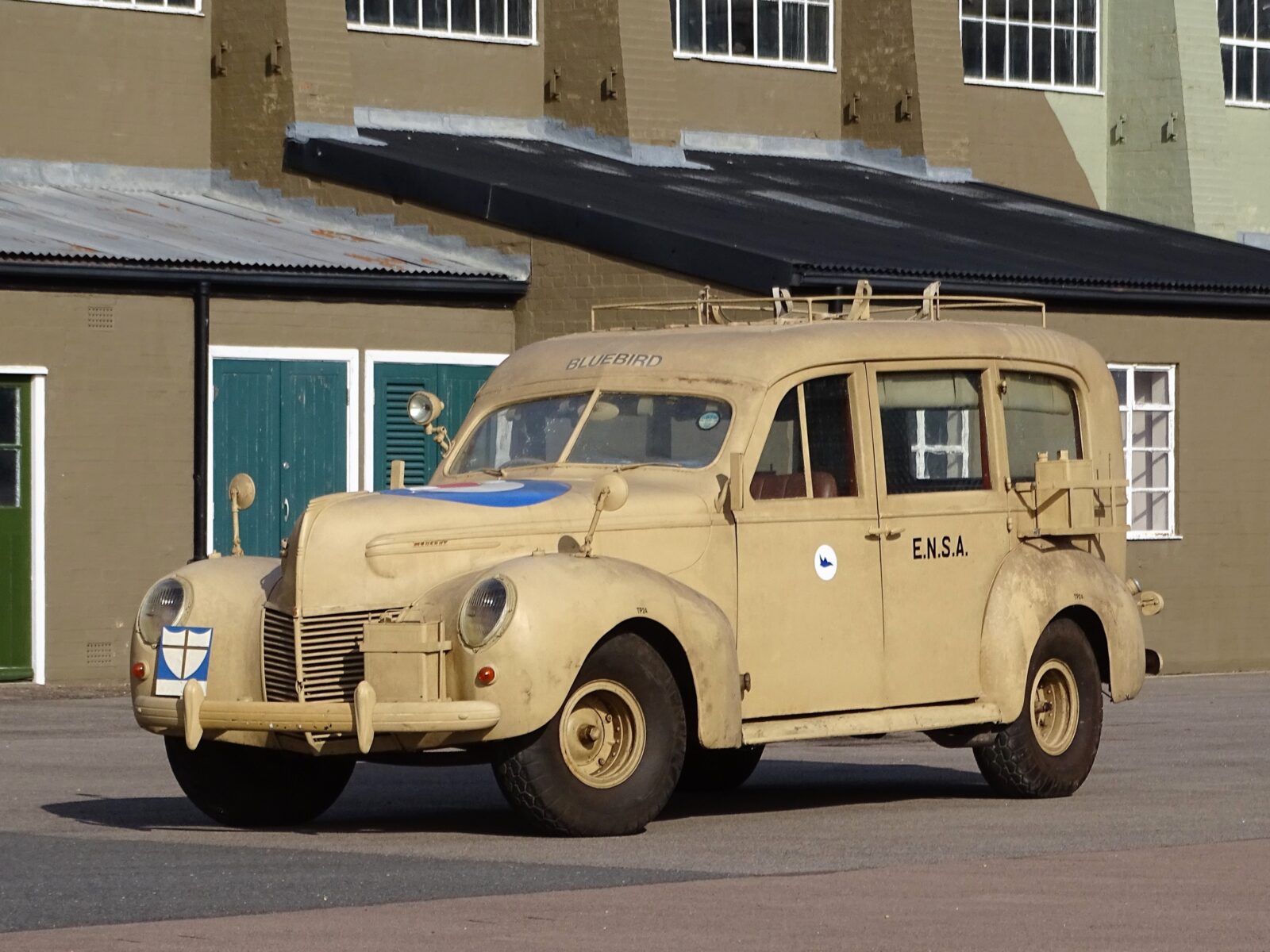 This 1939 Mercury Eight has a fascinating history, it was ordered new by land speed record breaker Sir Malcolm Campbell and sent by him to the coachbuilders Windovers to convert it into an estate car (station wagon) with room to sleep two in the back.

As it happened the car was mostly used by Britain’s biggest pop star at the time, George Formby, who bought it from Sir Campbell and used it as a camper while touring the Allied fronts and entertaining the troops during WWII.

Sir Malcolm’s original plans for the vehicle were that it be used by his crew, and likely himself also, for transportation and accommodation duties in the various remote locales they needed to travel to for their record-breaking adventures on land and water.

Various iterations of the name “Blue Bird” were used by Sir Malcolm Campbell to name his record-breaking cars and boats including a Sunbeam 350HP, a Napier-Campbell, a Campbell-Napier-Railton, and a Campbell-Railton. As a result of this you’ll notice the word “Blue Bird” has been stenciled onto the forward roof of this car just above the windshield.

After he sent this car off to Windovers they set to work increasing the height of the roof and added a full station wagon-style back to the car. They also ensured that the rear seats would fold into the floor to provide a flat sleeping platform with space for two – this would allow mechanics and engineers to have mobile accommodation and even work in 24 hour shifts when needed. 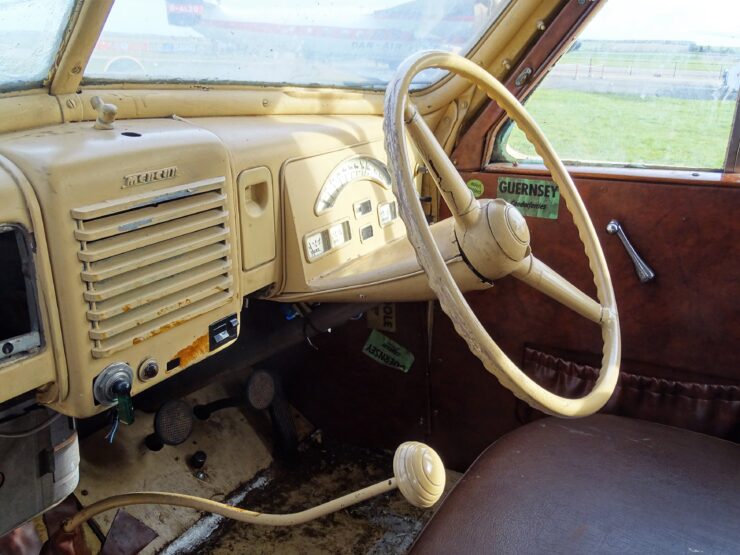 Above Image: The car still carries its desert military colors, with plenty of patina as you would expect from its adventures.

1939 was the first year of the Mercury Eight Series 99A, Mercury was essentially an upmarket member of the Ford family a little below the Lincolns. The beautifully art deco styled car came as either a two door coupe or a four door sedan, with convertible or tin top versions of each available.

As the name suggests, the Mercury Eight was powered by a V8, and not just any V8 but a Ford Flathead V8 – the one that’s credited with getting America to fall in love with the engine configuration in the first place.

With a swept capacity of 239 cu. in. (3.9 litres) and 95 hp the Mercury Eight Series 99A was notably more expensive than a Ford V8 however it came with that beautiful Mercury styling, a luxurious interior, and it even came with hydraulic brakes as standard.

A good-looking, aerodynamic car with a V8 under the hood appealed to Sir Malcolm so much that he bought a brand new “overseas market” example of the car shortly after its 1939 launch. Sadly 1939 would also coincide with the outbreak of World War II and as a result Sir Malcolm Campbell was never able to use his Mercury for its intended purpose.

As a pilot from World War I and a Knight of the Realm, Campbell commanded the military police contingent of the Coats Mission whose job it was to evacuate King George VI, Queen Elizabeth, and their immediate family from London in the event of German invasion from 1940 till 1942.

Above Video: George Formby performing “Our Sergeant Major” for the troops during WWII.

Rather than letting his custom built Mercury go to waste Campbell sold it to Britain’s highest paid musical performer, George Formby, who was off to embark on a 53 day ENSA tour (Entertainments National Service Association) in August 1943 to perform for the troops in Italy, Sicily, Malta, Gibraltar, Libya, Tunisia, Egypt, Lebanon, and Palestine.

The vehicle was modified by the REME (Royal Electrical and Mechanical Engineers) prior to departure, they gave the car a new military livery, larger wheels and tires for use on sand, and partially painted windows to reduce the sun’s glare.

Formby and his wife would sleep in the back of the Mercury for much of this trip, it’s believed that he entertained over 750,000 on this specific tour and a total of 3 million throughout the duration of the war – sometimes climbing into trenches close to enemy lines to chat to the soldiers, tell them jokes, and play them songs on his famous Banjo Ukulele.

Formby sold the car on after his tour and it ended up passing through some fascinating collections over the intervening decades, including ownership by the president of the George Formby Society and Earl Peel. 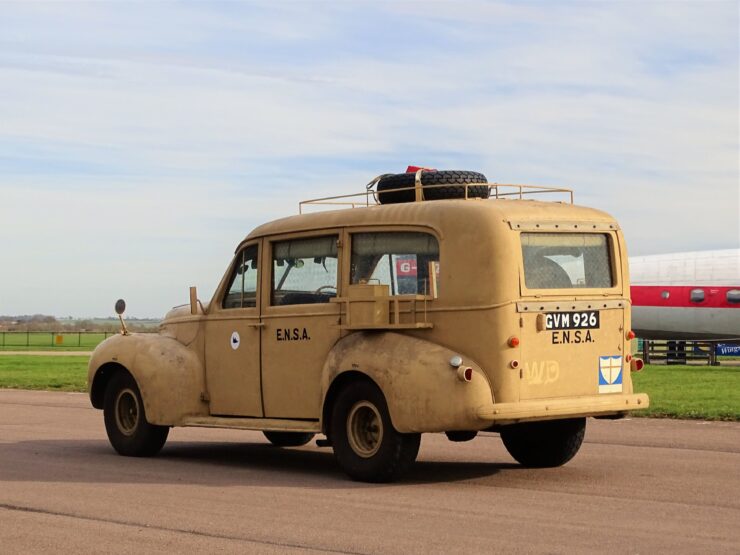 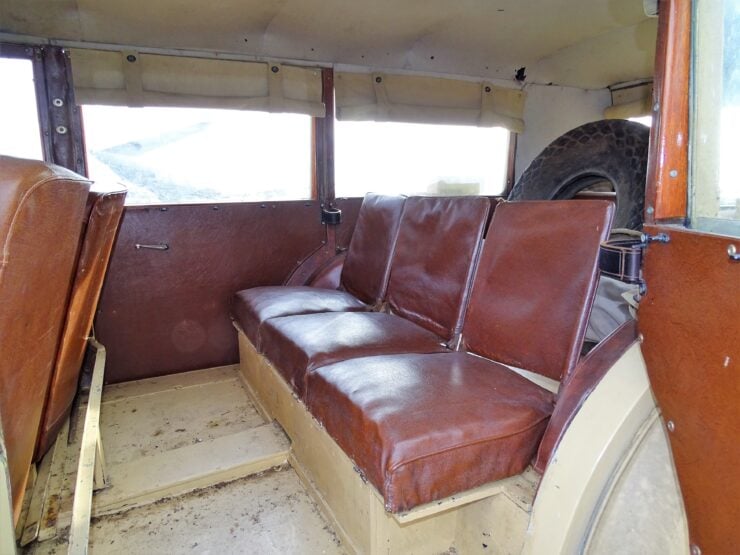 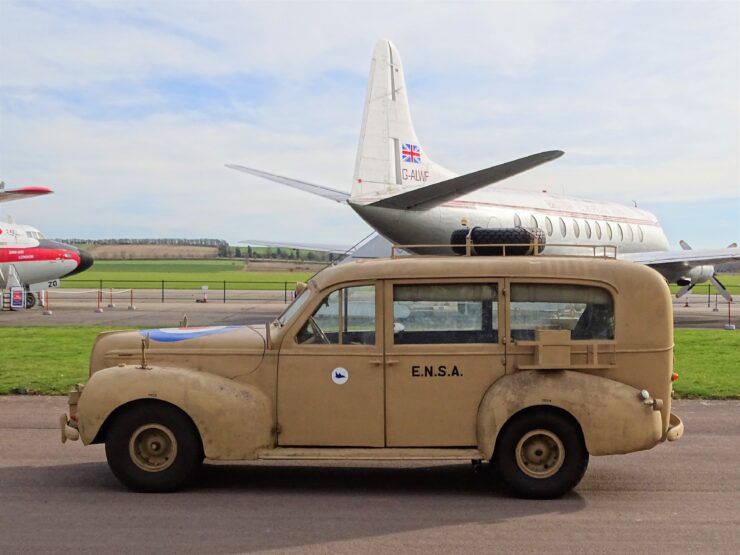 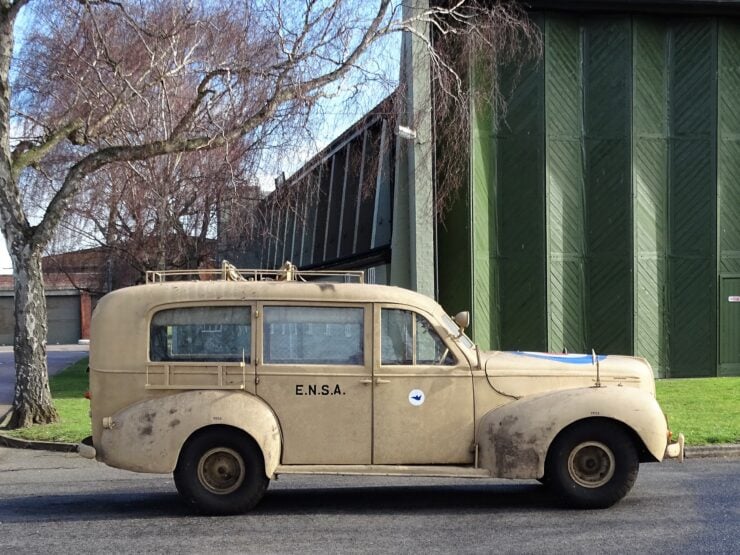 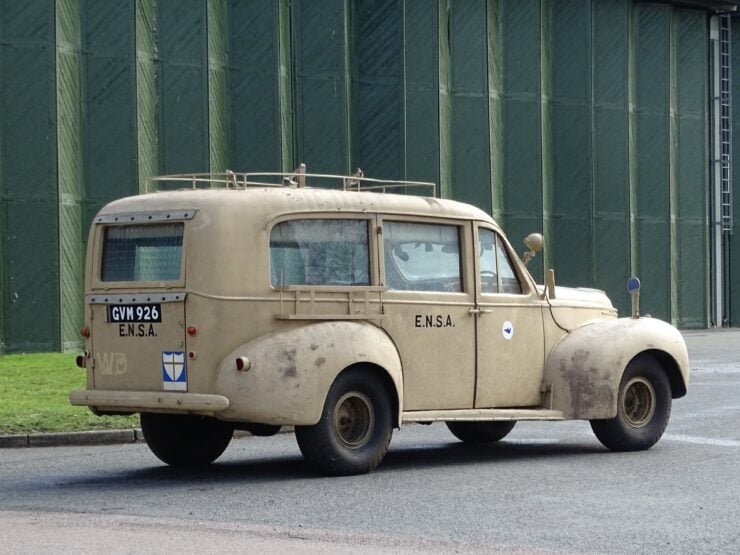 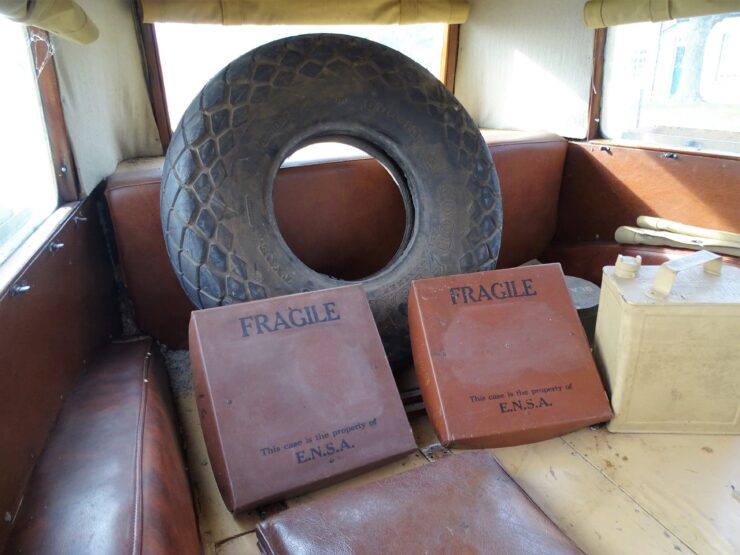 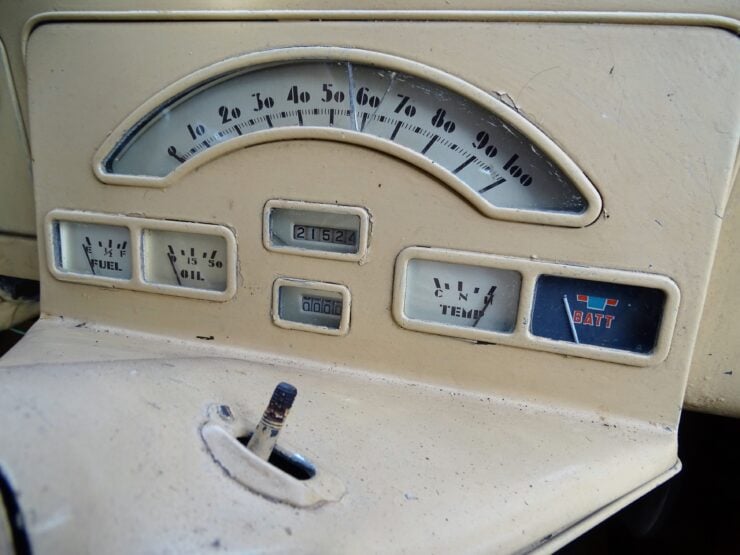 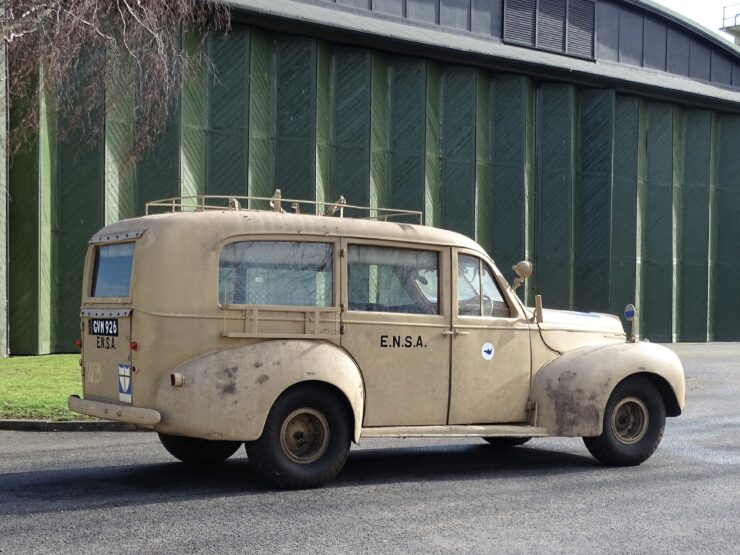 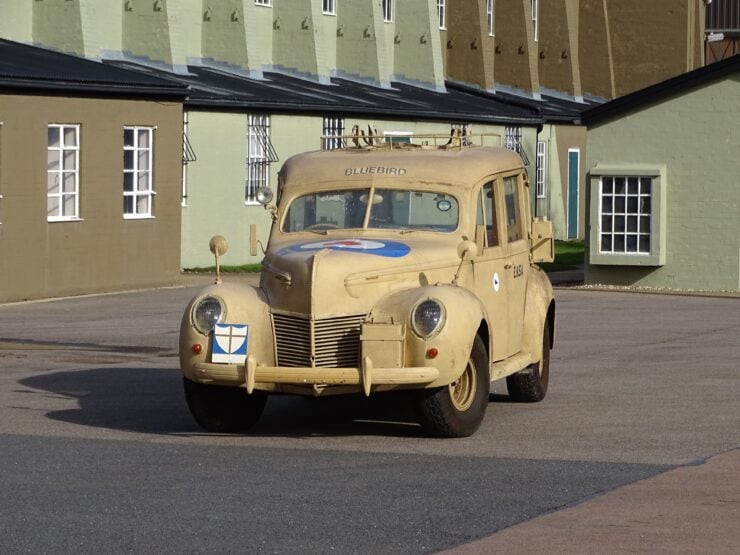 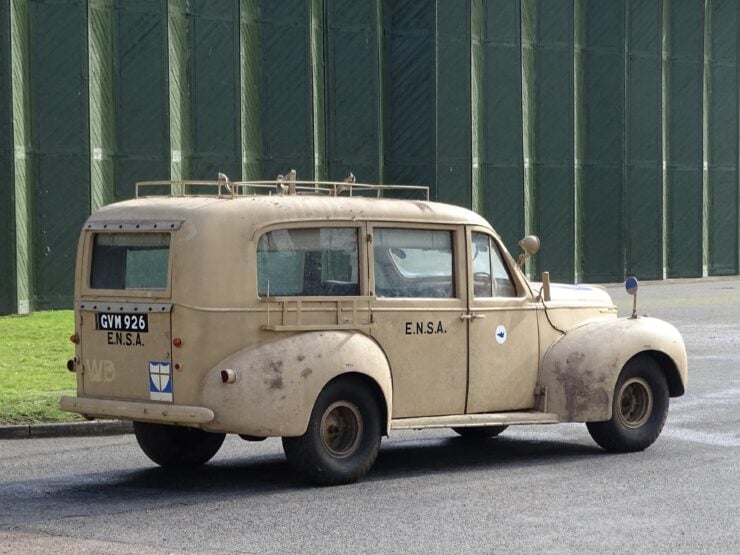 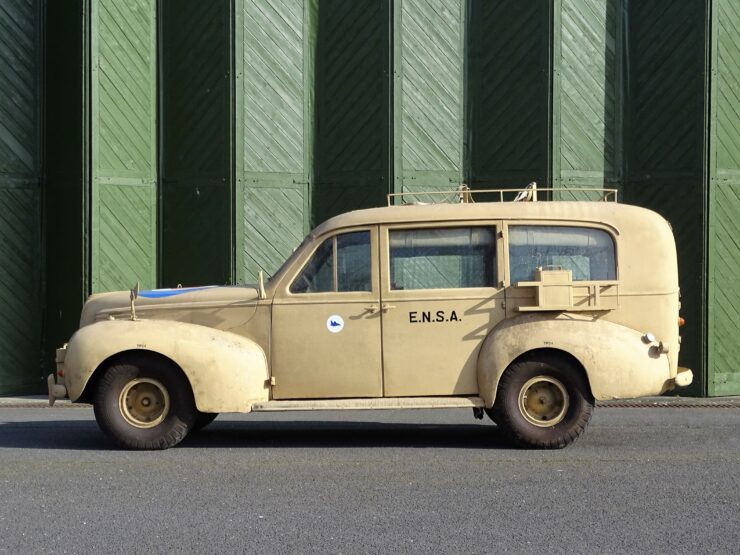 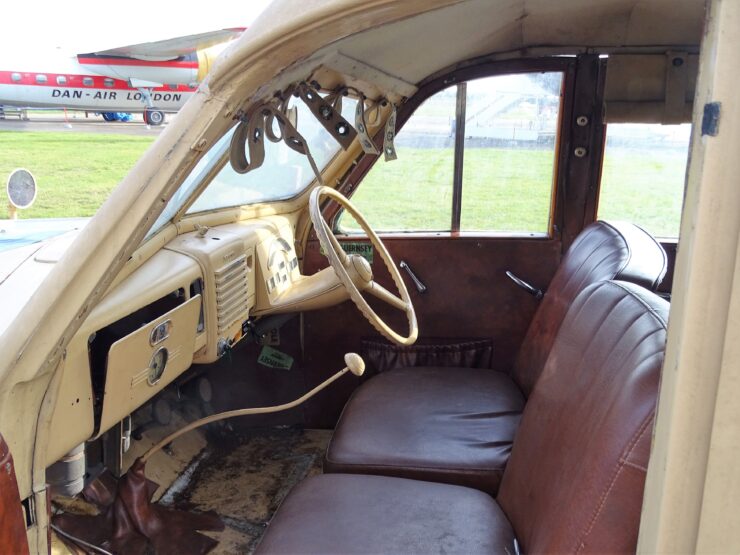 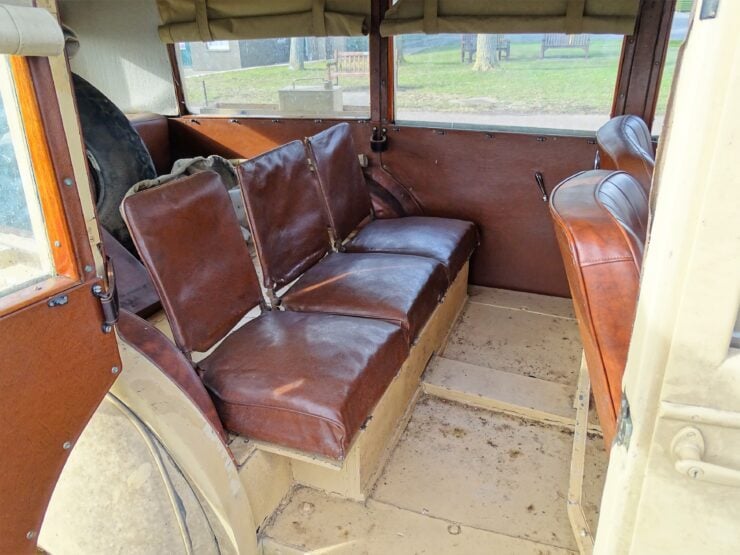