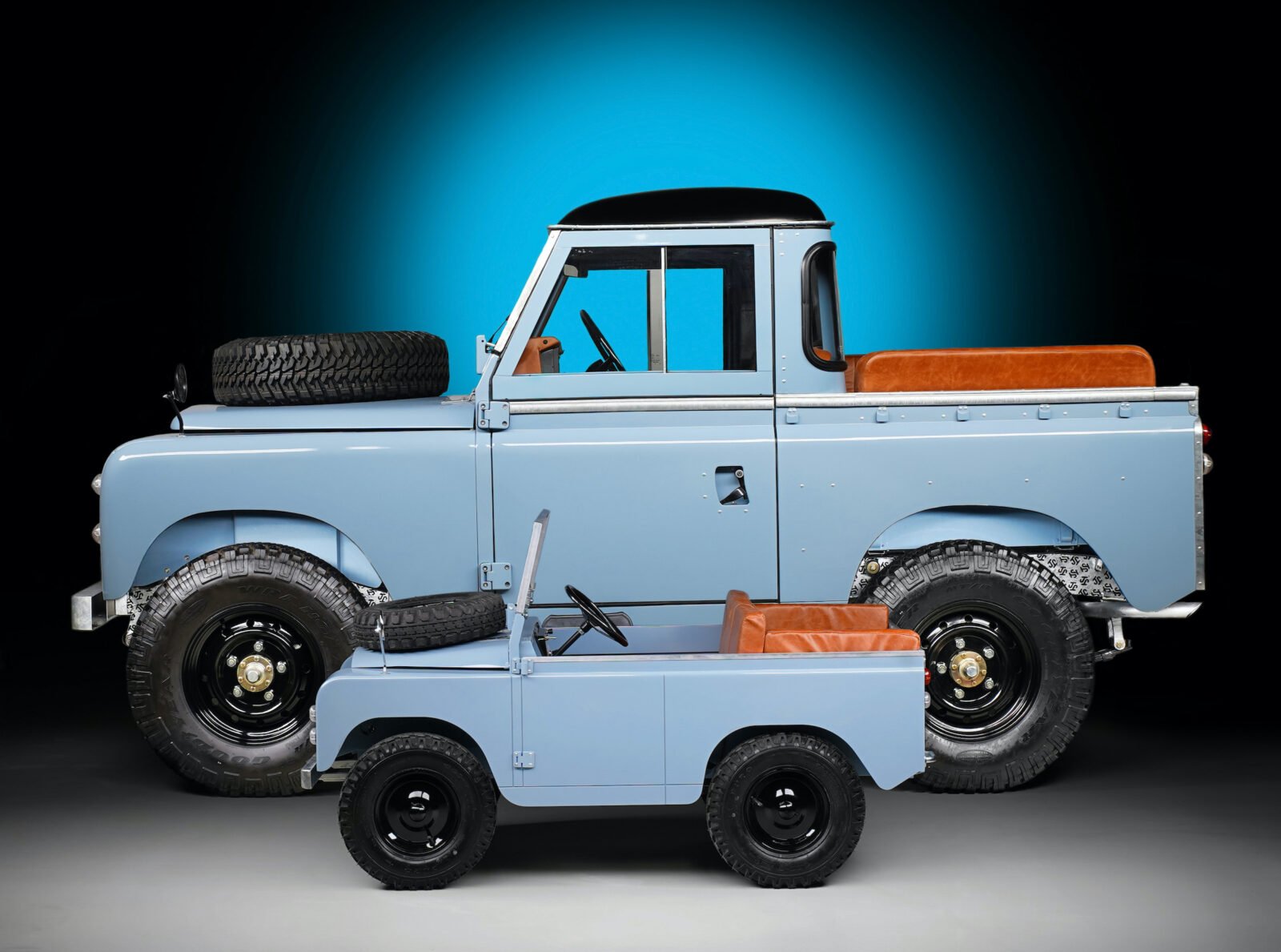 This unusual Series 3 Land Rover was built to the exacting specification of Hikmet Sugoer, otherwise known as Berlin’s “Sneaker King” and a name that’ll be immediately familiar to anyone with a passion for shoes.

Although we often associate Series Land Rovers with men who have oil under their fingernails and a fascination with leaf springs, this Land Rover wasn’t built for one of them.

Hikmet Sugoer had it built specifically for his wife, Katja Sugoer, who is an ardent, life-long fan of classic four-wheel drives, Land Rovers in particular, and has always wanted one.

✱ This 1974 Series 3 was saved from the scrapheap and restored to better-than-new condition by Falcon Design in Germany.

✱ The project was overseen by Berlin’s Sneaker King Hikmet Sugoer, who had it built for his wife Katja Sugoer.

✱ The completed Land Rover was paired with a matching Toylander Series 3 for the couple’s young son, in the same colors as Mom’s car. 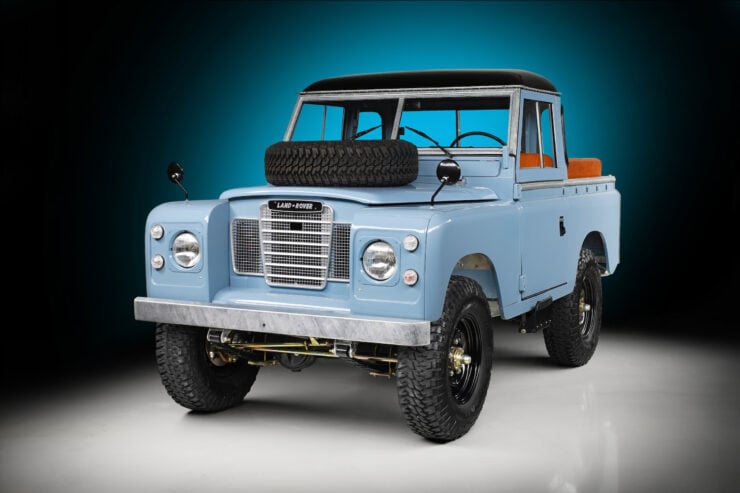 Not that long ago Katja agreed that Hikmet should get himself a Porsche 912, a car he’s loved for years and had finally decided to buy. In return, Hikmet approached his fellow German’s at Falcon Design and together they set to work laying out the details of Katja’s dream Land Rover.

The project started as they all do at Falcon Design, with an extremely rough vintage Land Rover that many might consider beyond saving.

The project vehicle was a 1974 short wheelbase Series 3 Land Rover that had seen better days, it was fitted with a homemade bull bar and rust had had its way with much of the steel. The suspension was noticeably lower on the left than on the right, but the chassis and engine were able to be saved, as well as a number of original body panels, though all needed repair work.

Once repaired the chassis was galvanized and given a bespoke paint job, all new suspension and disc brakes were fitted, along with new wheels and tires, and side steps to make it easier to get in and out. The engine, gearbox, and transfer case were all meticulously rebuilt, as were the axles, all to a condition that is likely better than it was when they left the factory originally. 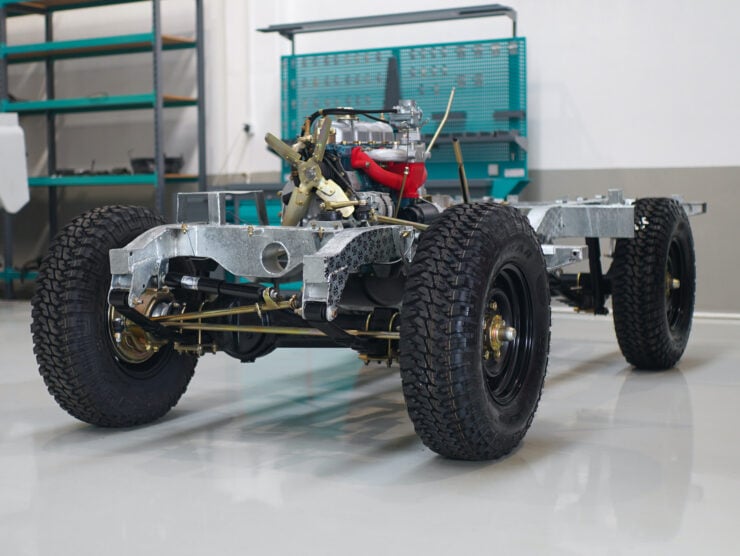 Above Image: This is the rolling chassis before the body went back on, you can see the unpainted zinc coating on the chassis from the galvanizing process.

The body was finished in light blue which is offset with a black roof and tan leather upholstery throughout. Marine-style wooden paneling is fitted in the rear between two fold down seats, and the dashboard is also upholstered in leather rather than the original black plastic.

The completed Land Rover has both a hard top and a folding soft top that can be swapped over depending on the season, there’s also an Isofix anchor point inside for their baby’s car seat – an unusual feature in a vehicle of this vintage.

The final touch was to have a Toylander Series 3 made for their son in the same colors as Mom’s, which can be seen in the image up at the top of this article. 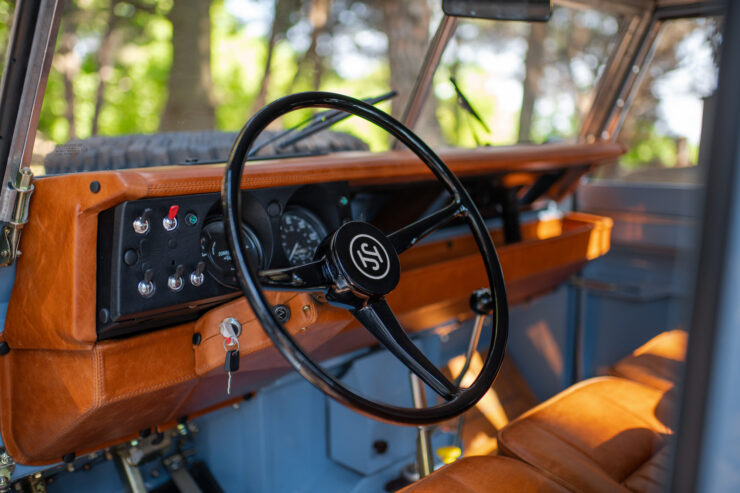 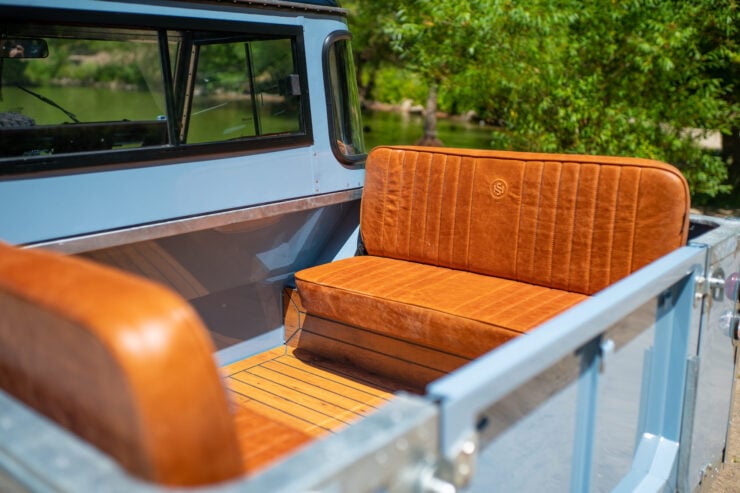 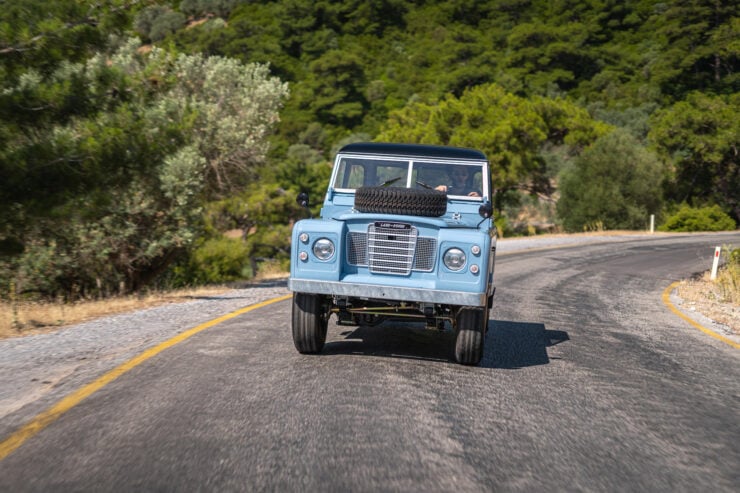 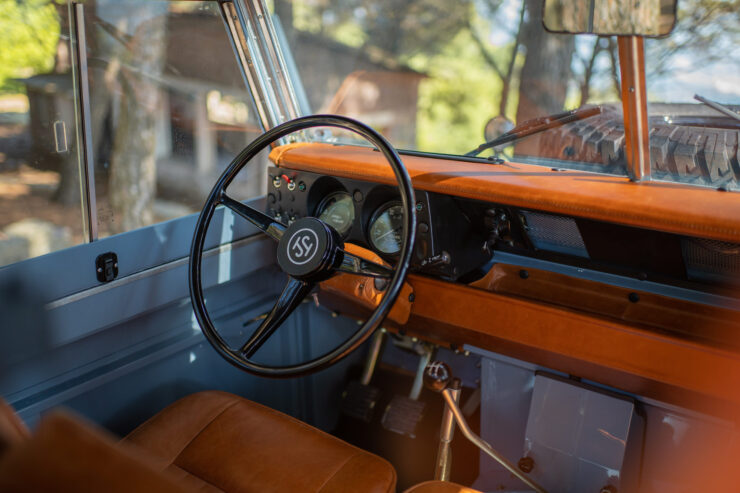 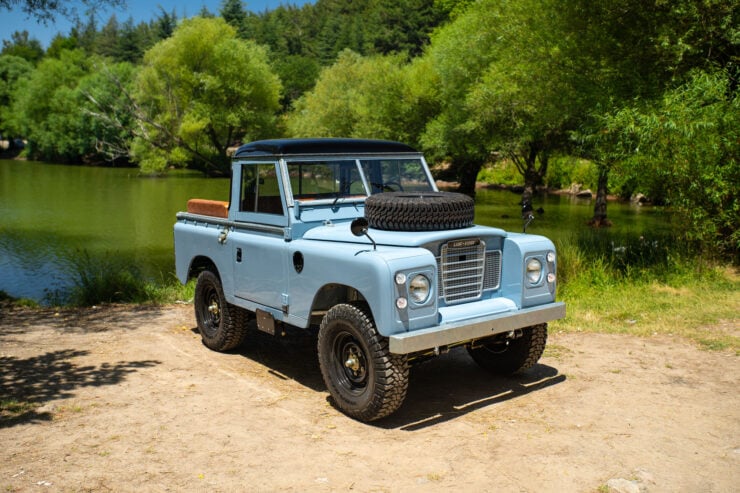 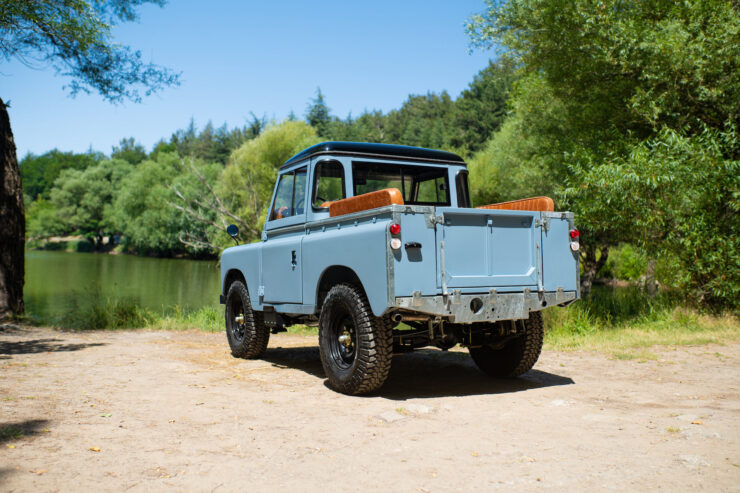 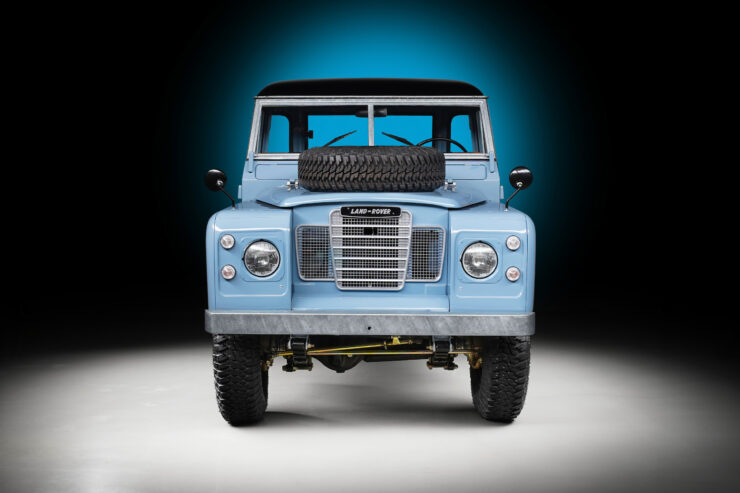 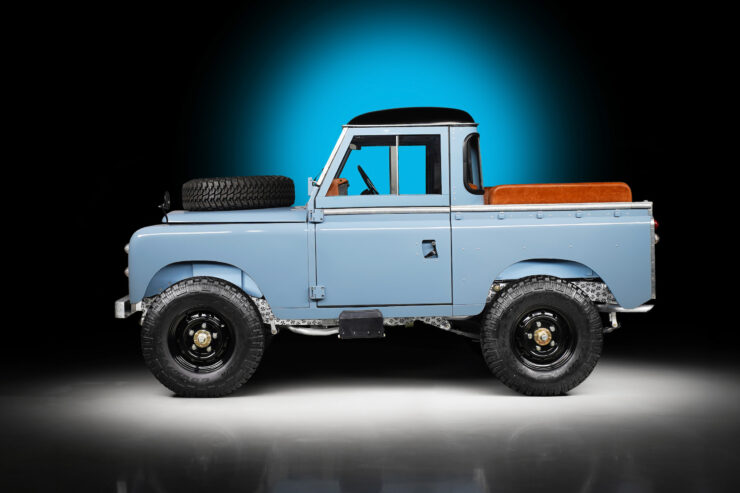 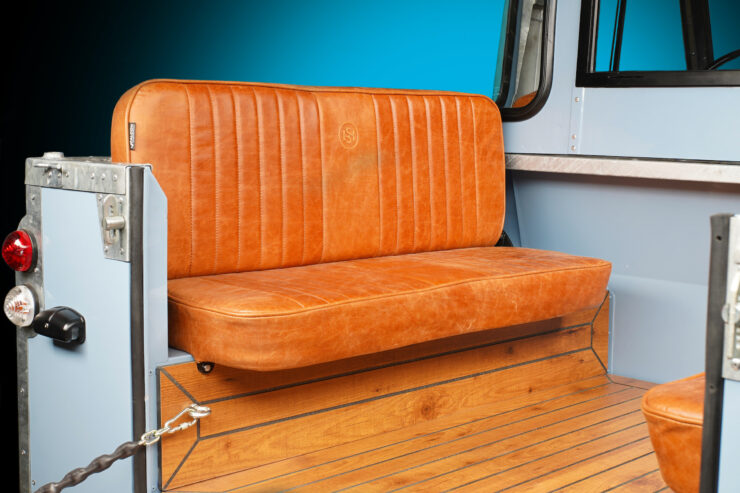 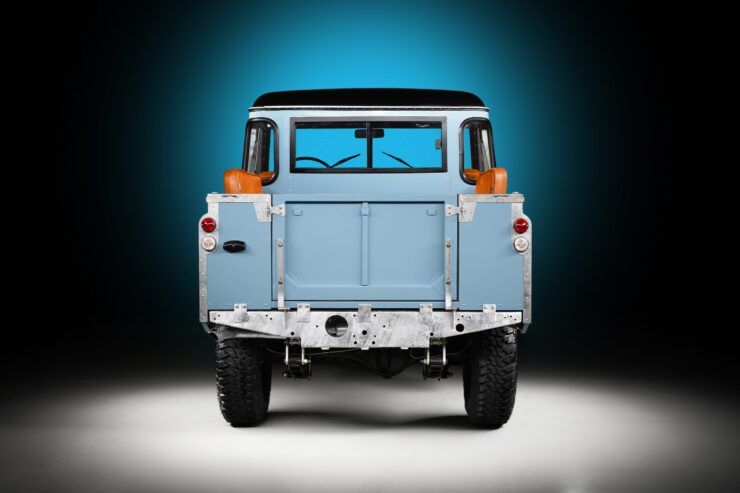 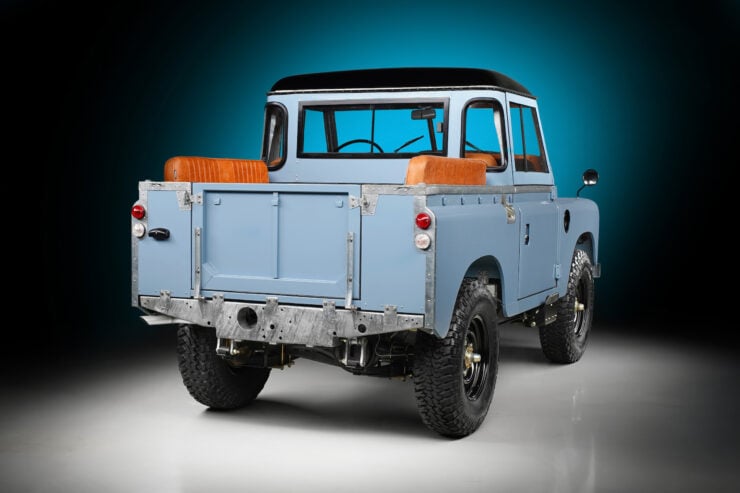