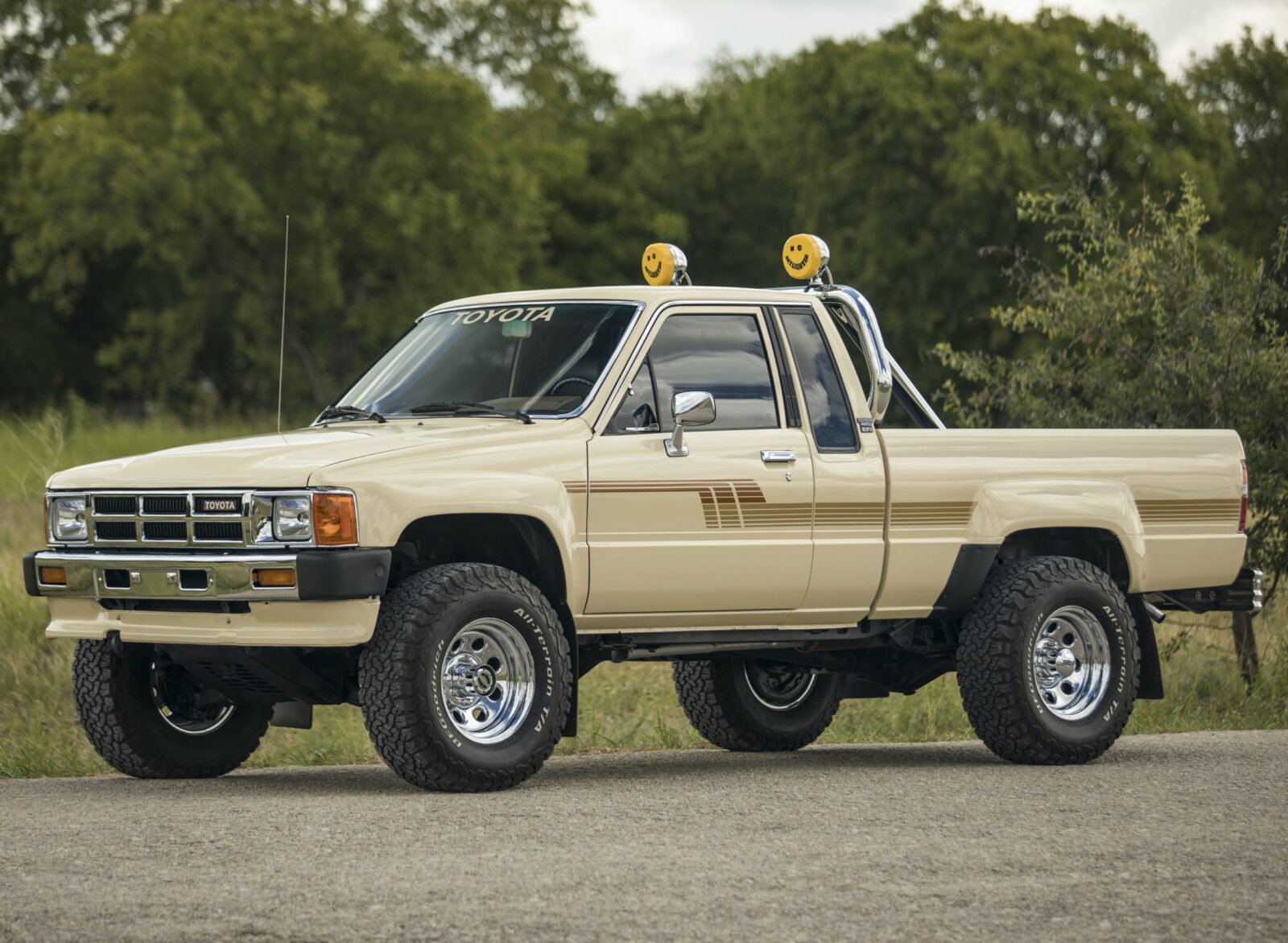 This vehicle, known as the Toyota Pickup in the United States but as the Toyota Hilux in almost all other world markets, has become one of the most highly respected pickup trucks in the world – to the point that the team of Clarkson, Hammond, and May on the old Top Gear threw one off a building to see if it would still work. It did.

Very few Hiluxes looks as clean as this one, they almost all lived hard lives on farms or even harder lives in the hands of tradesmen. This has resulted in there being a bit of a shortage of genuinely tidy and collectible examples in the world, and as a result the past few years has seen their prices begin to rise.

Toyota first released the Hilux back in 1968 as a small rear-wheel drive pickup truck that was inexpensive to buy and cheap to operate. The model slowly gained favor but it wasn’t until the third generation was released in 1978 with a four-wheel drive option that the world really began to sit up and take notice.

The simple body design of the third generation Hilux was penned by Minoru Oya, the front end was completely redesigned and it shared little in common with its predecessor – but it would be this newer design that would strongly influence all new Hilux models going forwards.

The fourth generation appeared in 1983 and importantly from 1986 onwards the four-wheel drive version of the Toyota Pickup was fitted with independent front suspension as standard in place of the original live axle front. This transformed road handling, where the majority of these trucks spend almost all of their time, and it became a feature all all new 4×4 Hiluxes.

The Toyota 4×4 Pickup is now in its eighth generation, it’s one of the best selling pickup trucks in the world, and it still retains a strong visual link with its early forefathers from the 1970s and 1980s. These 1980s-era Hiluxes are enjoying a boon in popularity that shows no signs of slowing down, much like the other classic 4x4s from the 1960s and 1970s.

The 1986 Toyota 4×4 Pickup is one of the cleanest examples we’ve seen in recent memory, in fact it looks almost new. It’s fitted with the highly-desirable 2.4-litre SOHC inline four-cylinder engine with fuel injection, mated to a three-speed automatic transmission.

This model is an “Xtracab” variant with a few extra inches of cab length, this provides much-needed additional storage space behind the seats for bags and other items you may not want to toss into the exposed tray back.

It’s been beautifully refurbished throughout with a beige paint job paired with period correct decals down both sides, a chrome roll bar with twin spotlights, and chromed steel wheels with BF Goodrich All-Terrain tires.

It’s due to roll across the auction block with RM Sotheby’s in early September with an estimated value of between $25,000 and $30,000 USD. If you’d like to read more about it or register to bid you can click here to visit the listing. 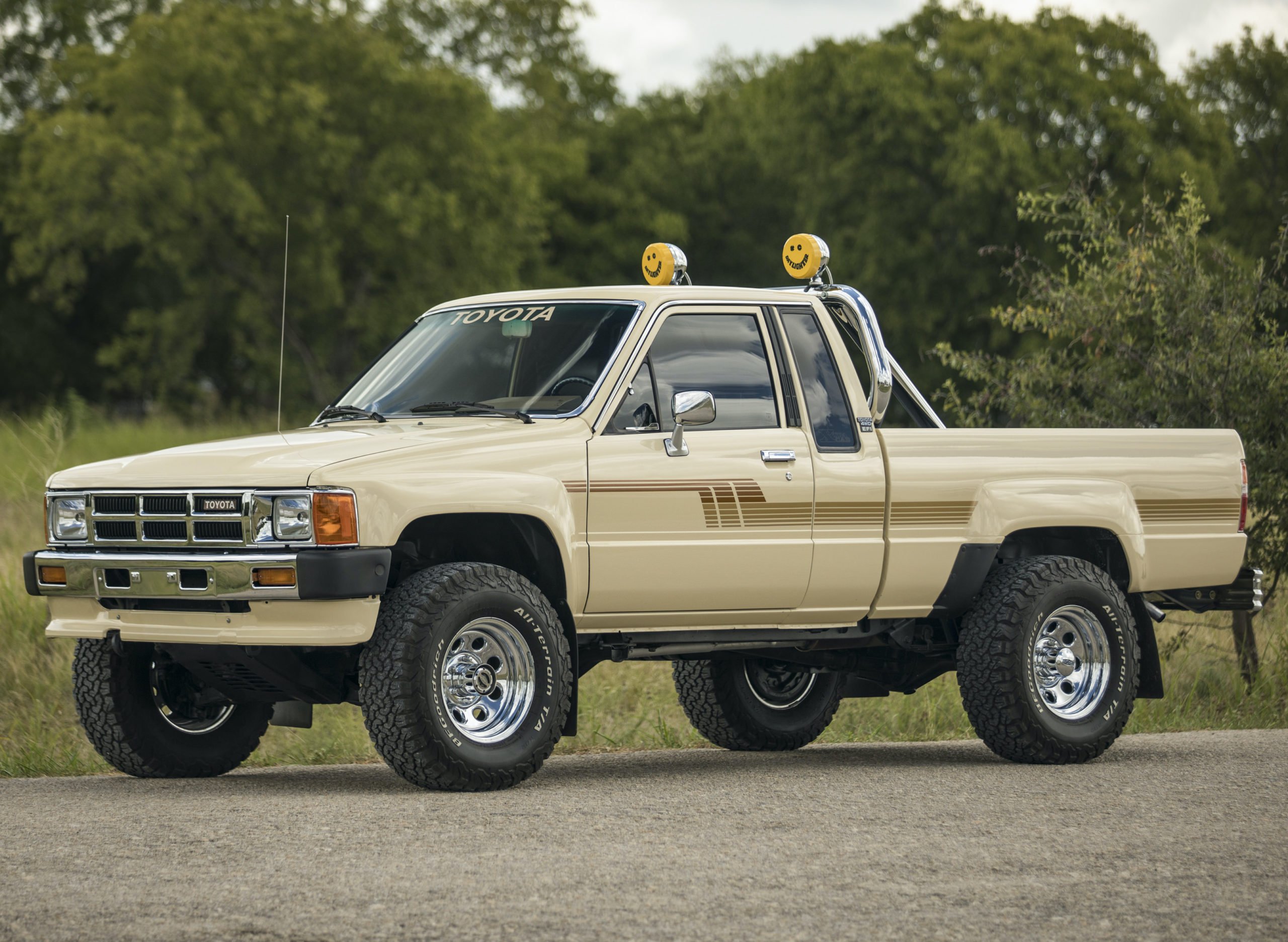 Facebook Twitter WhatsApp Email The car you see here was the first and most significant prototype made for the Lancia Rally 037, a vehicle…

Facebook Twitter WhatsApp Email This 1970 Ford Mustang Boss 302 was personally owned and driven by Parnelli Jones, an icon of American racing and…

Facebook Twitter WhatsApp Email The Lancia Aurelia B20 GT is a car perhaps best known for its good looks. Truth be told it should…

Facebook Twitter WhatsApp Email   The original Ford Mustang Mach 1 was first released in 1968 as a 1969 model, it would prove instantly…

Facebook Twitter WhatsApp Email   The Chevrolet K5 Blazer you see here has been modified with a brand new 376 cu. in. LS3 crate…