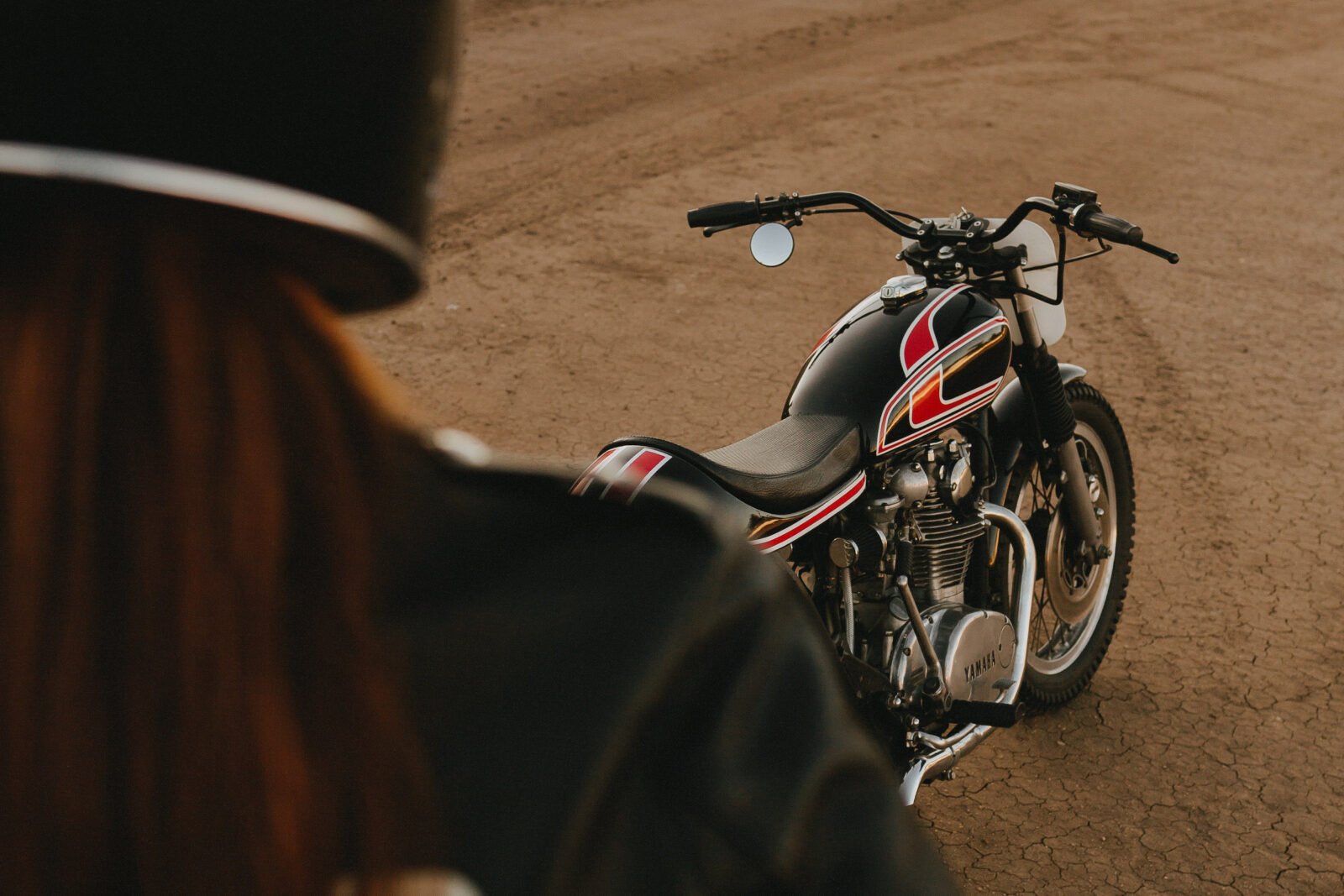 This post was written by Tamara Raye Wilson. When possible we like to bring you the story of a custom motorcycle in the words of the people who built it, to cut out the middle man and give you unique insight into their methods and reasoning.

My name is Tamara Raye Wilson, and of the many things in this world that I am, a bike builder is not one of them. It certainly does come in handy that I am a mechanical engineer by trade. However I will admit that my working days are spent hanging around rides and rollercoasters at Disneyland, rather than customizing motorcycles.

Thanks to the COVID-19, I began a whole new life in lockdown working solely from home in March of this year. When you cage up a fanatical rider for too long, lofty project ideas and goals begin to emerge from the psychosis of cabin fever.

“Enter the large paperweight in the back of my garage resembling a Yamaha.”

My boyfriend Jorma Vik and I toil away on projects in our home garage in Ventura, CA. The Yamaha is the sole Japanese bike nestled amongst our small fleet of old British iron. 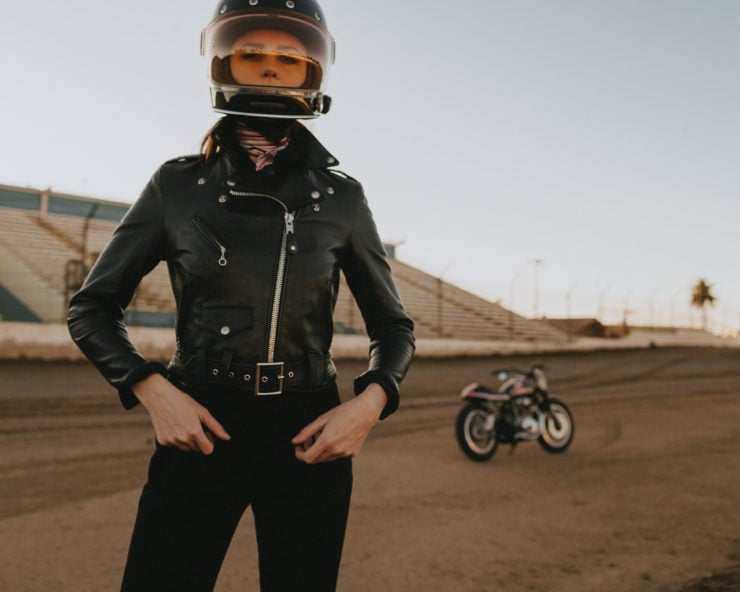 I am a firm believer that this motorcycle found me, and not the other way around. Ten years ago, naïve and freshly inspired by racing footage of Bud Ekins and Kenny Roberts, I set out in search of a bike of my very own. Alas, I very quickly realized that 60’s-era Desert Sleds or 70’s Flat Trackers were vastly outside of my budget. So with a meager stack of cash in hand, I fortuitously met an older gentleman at the Long Beach motorcycle swap meet that told me he might be able to help.

He invited me over to check out his garage stacked full of WW2-era bikes, a handful of Sunbeams, and a few other gems. Sitting off to the side of his collection, and sticking out like a red-headed stepchild, was a small upright parallel twin – the Yamaha that I soon began to call my ‘starter Triumph.’

A few years later I found myself grappling with the myriad of inconsistencies and reliability issues that come with treating a 40 year old bike like a daily rider. I soon declared that I had outgrown the 650 and bought a larger, air-cooled Triumph. The distraction of modern scramblers, and the fascination of chucking a 550 lb bike through the dirt, parked baby in the corner for more than half a decade.

“To be frank, the sole purpose of resurrecting the XS650 was originally to sell the damn thing.”

My first thought was to simply reassemble the existing bits and bobs into a true roller, and send it out the door to make more room for projects centered on my 1966 Triumph T100C. 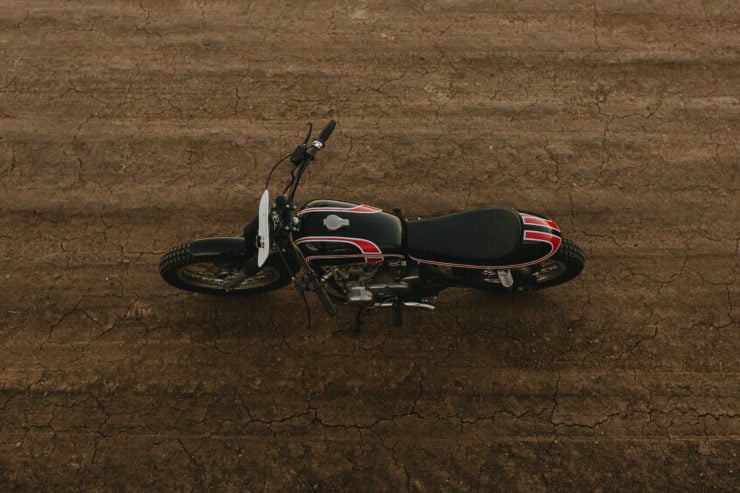 Then one night my boyfriend and I mocked it up with some spare tracker parts lying around the garage, you know, for giggles. Giggles quickly gave way to a sideways glance, a twinkle in my eye, and the thought of “…what the hell? If I’m going to do this, I might as well just do it the right way.”

Cue visions of the Ascot Friday Night Half Mile and a blurry yellow and black film strip motif Yamaha whizzing by, piloted by King Kenny himself. I’ve learned that it doesn’t matter whether you are a seasoned bench racer, or a retired AMA pro- if you were around in the Ascot era, there is a story to tell so rich in detail that you can almost smell the burning race fuel wafting through the air.

“Suddenly I realized that every tale I’ve ever been told about Ascot Park could be recollected from the basket case sitting mocked up in my own driveway.”

The bulk of the fabrication work went into frame modifications of the bike. The pillion peg loops were removed, along with relocation of the battery box. The air box was also removed along with extraneous reflectors, tabs and mounts (for removal of side covers, rear fender and tail light assembly, etc.) and stock wiring harness mounts. Iron Cobras Fabrication outfitted the rear frame loop with a laydown battery tray situated neatly under the seat cowl.

A custom wiring harness was built by Shawn McAtee, my longtime friend and engine mechanic for my 1972 DT2-MX250 VMX race bike. By and large the simplified wiring resembles that of its British counterparts of the same era, sans positive ground. The bike is now kick start only, and has been converted to LED headlight and taillight. 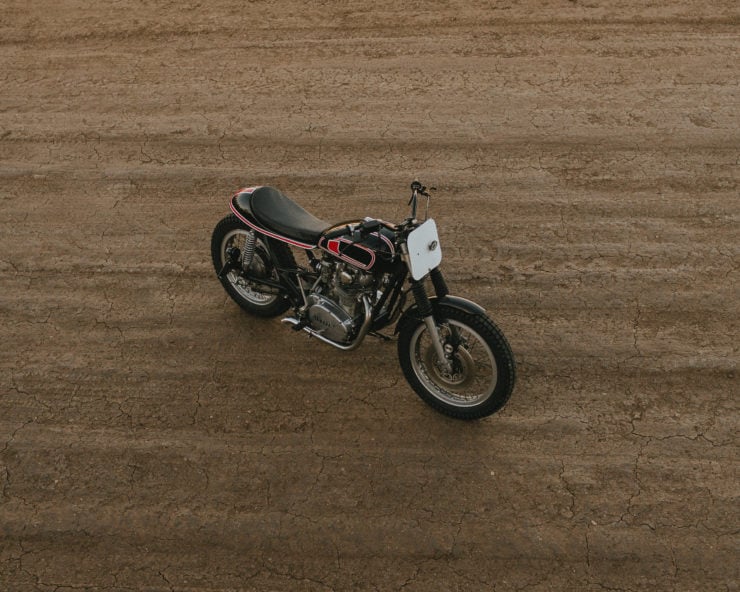 I very much realize now that this build was much more about what came OFF the bike, rather than what went on. It can be so easy to go overboard and fall into the trap of creating something that others might like, as opposed to what you personally want. I suppose the key is sticking to what you know, which in my case is VMX and VFT.

“Minimalize the lines, lighten up the weight, keep it comfortable, and fun as hell.”

The engine was given a thorough top-to-tail going through by Shawn McAtee to bring it back to a sound mechanical state, but has been mostly unmodified otherwise. I didn’t want to futz with a good thing, 1-2 kicks every time with a power band that has plenty of pull off the line through the lower gears and takes off like a shot in third up into the higher revs. 1/3 mile banked track, anyone?

It’s fitted with Mikuni BS38 carburettors and K&N style cone filters and the air box has been removed. The exhaust is an unrestricted Norton Commando style 2-into-2 header with Summit turn out exhaust tips.

This bike got in my blood and ultimately led me to people, places and experiences that I would never have dreamed of ten years ago before swinging my leg over it for the first time. To breathe life and fire back into the heart of this beast has been truly eye opening, and reminded me why I fell madly in love with motorcycles in the first place. 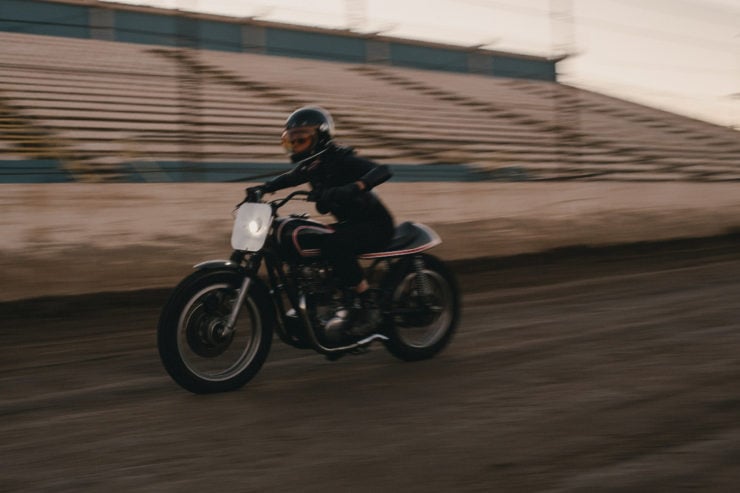 Am I going to quit my day job to become a professional bike builder? Certainly not. But this bike has taught me to embrace my humble place as a rider, and reminded me to hold dear the history and legacy of the two-wheeled legends that inspired the build.

Special thanks goes to the following who were instrumental in the build:

Editor’s Note: If you’re in the market for a beautiful custom Yamaha XS650 flat tracker Tamara is now selling this one and asking $6,200 USD. 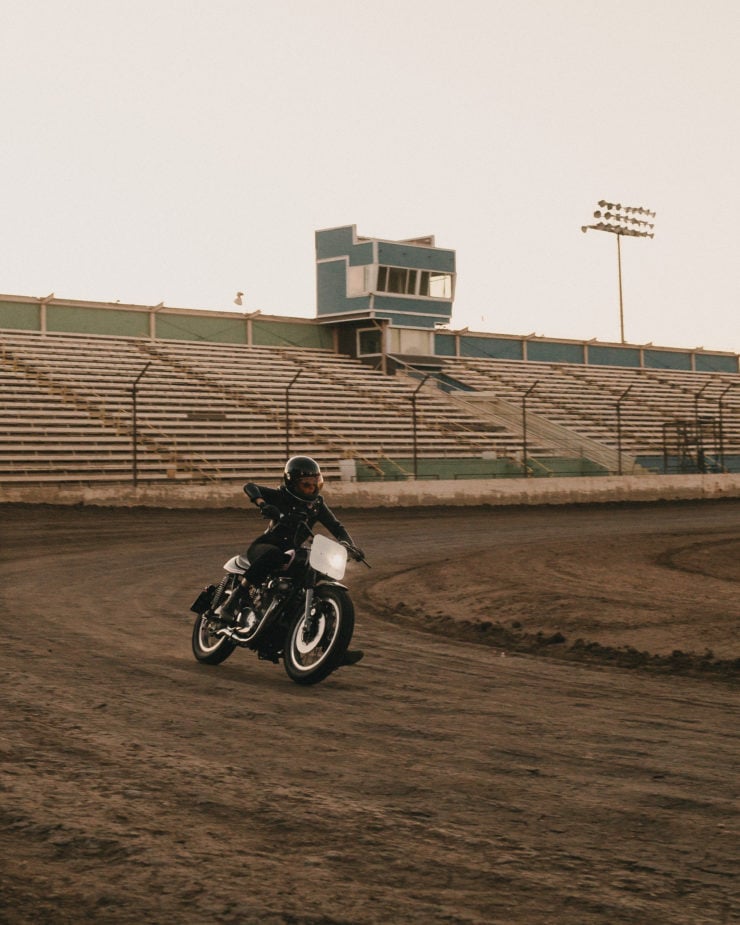 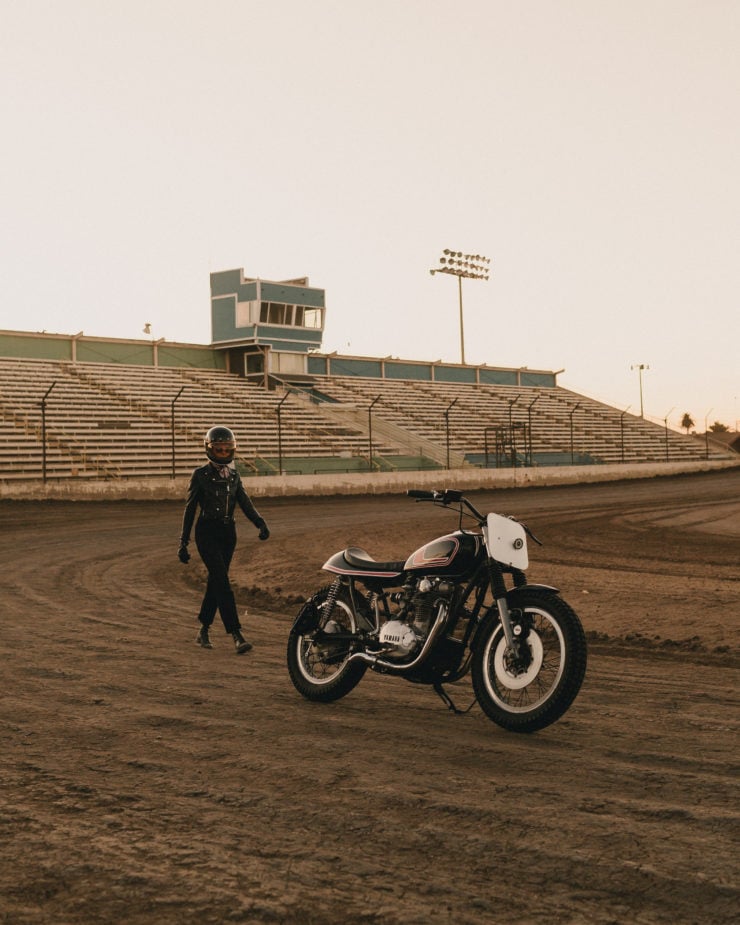 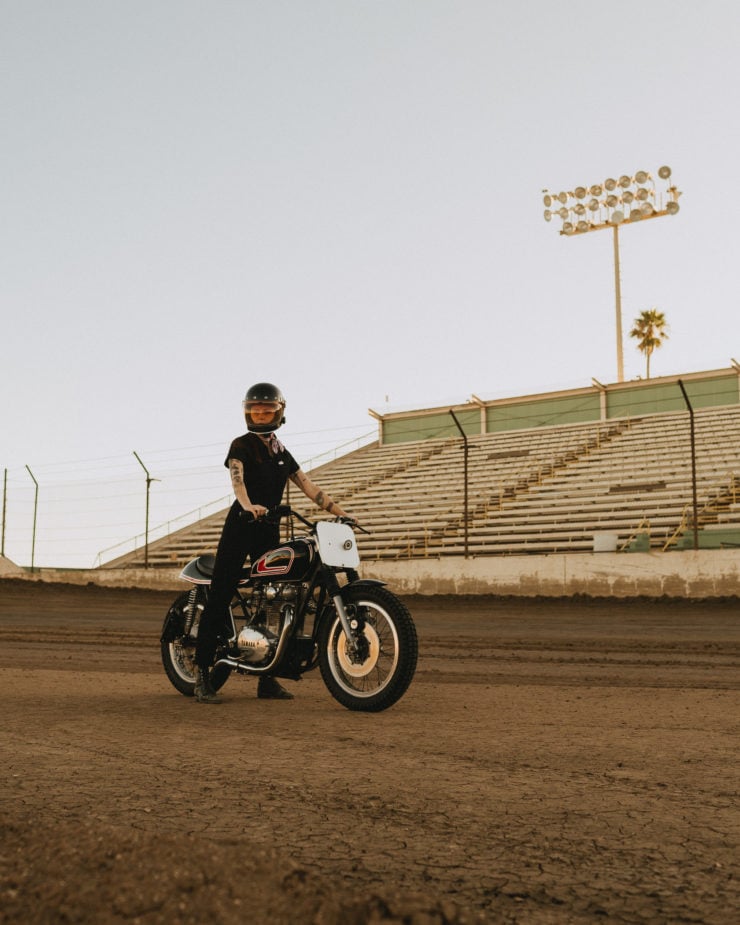 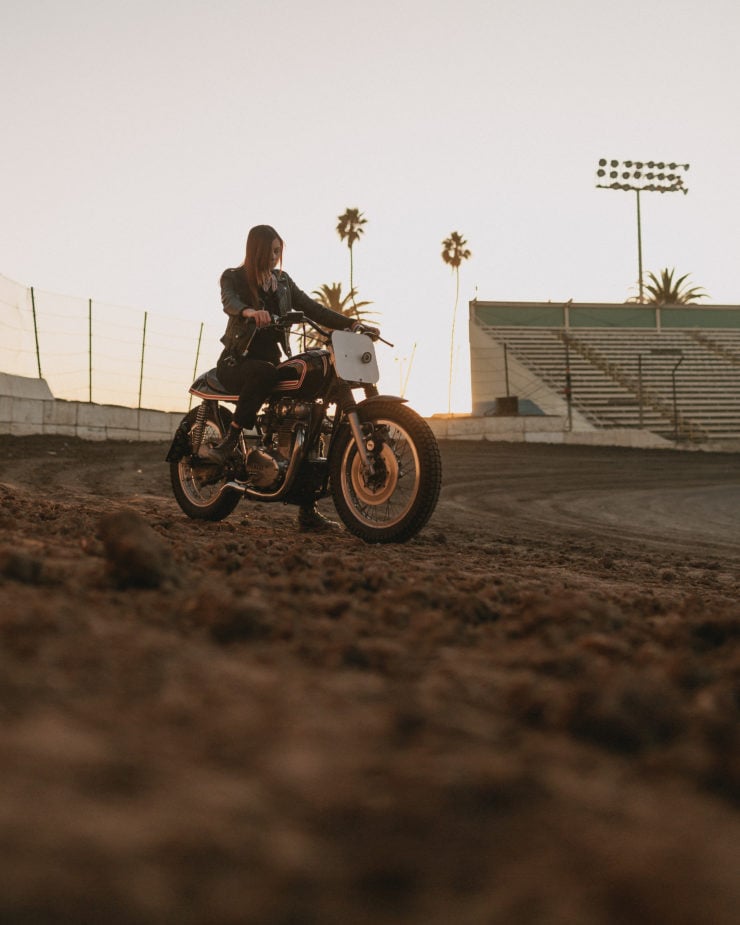 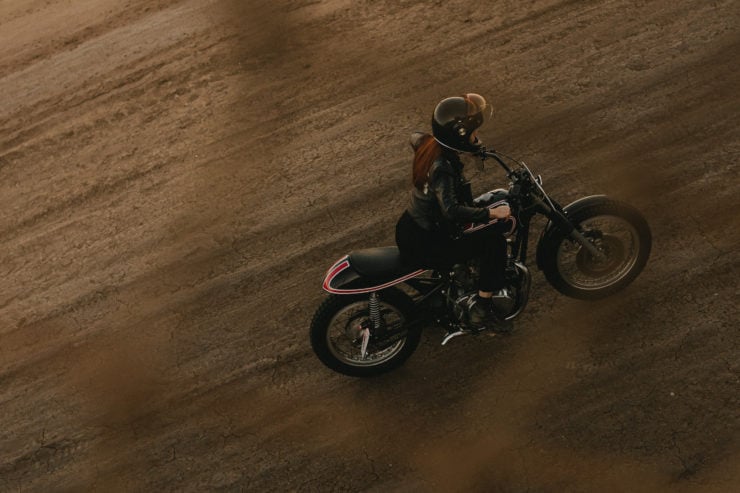 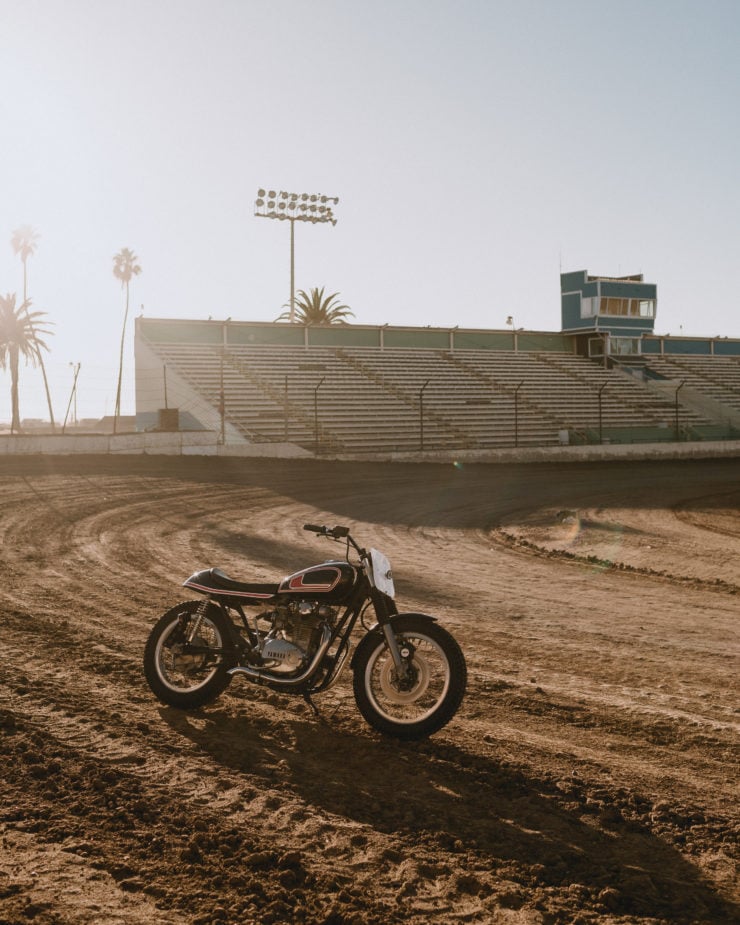 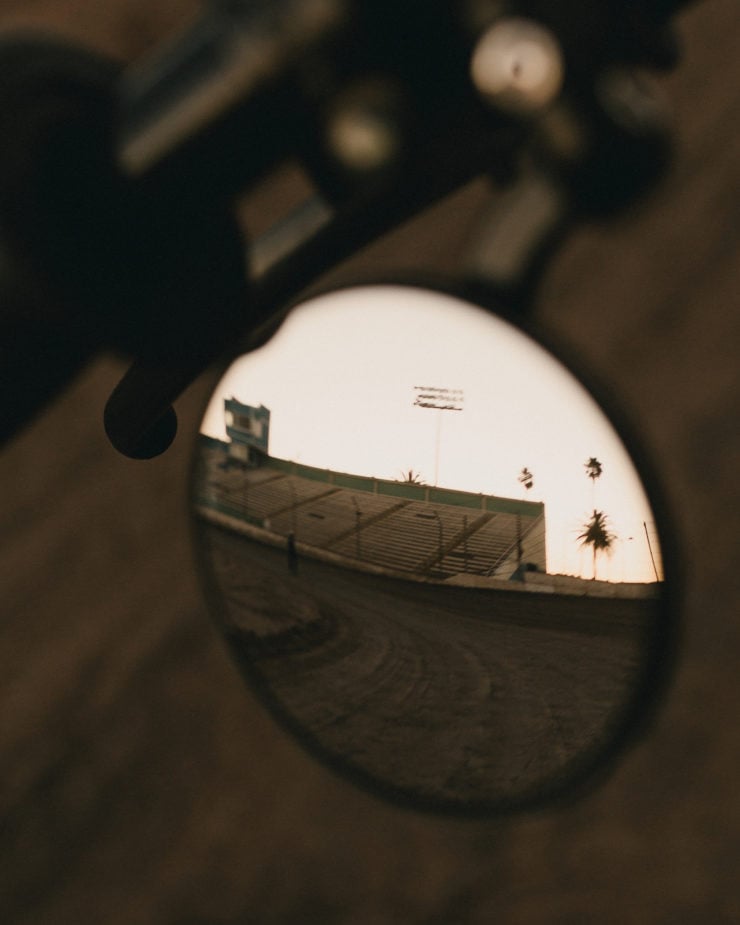 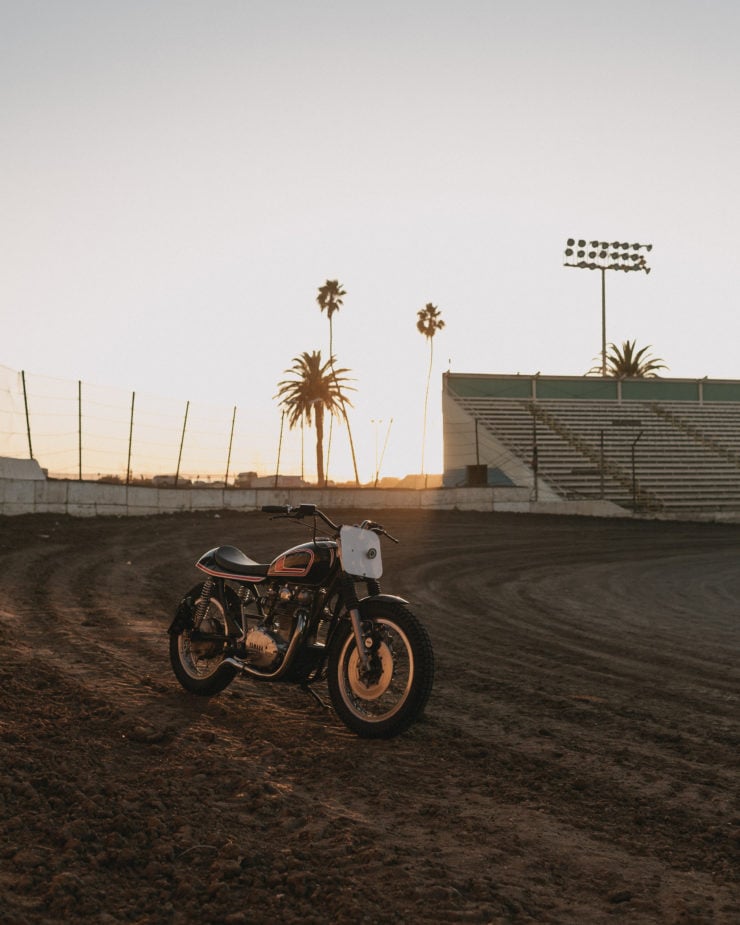 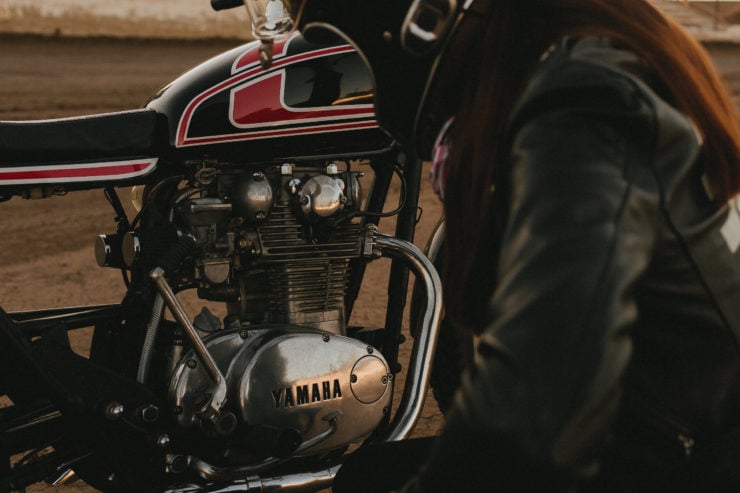 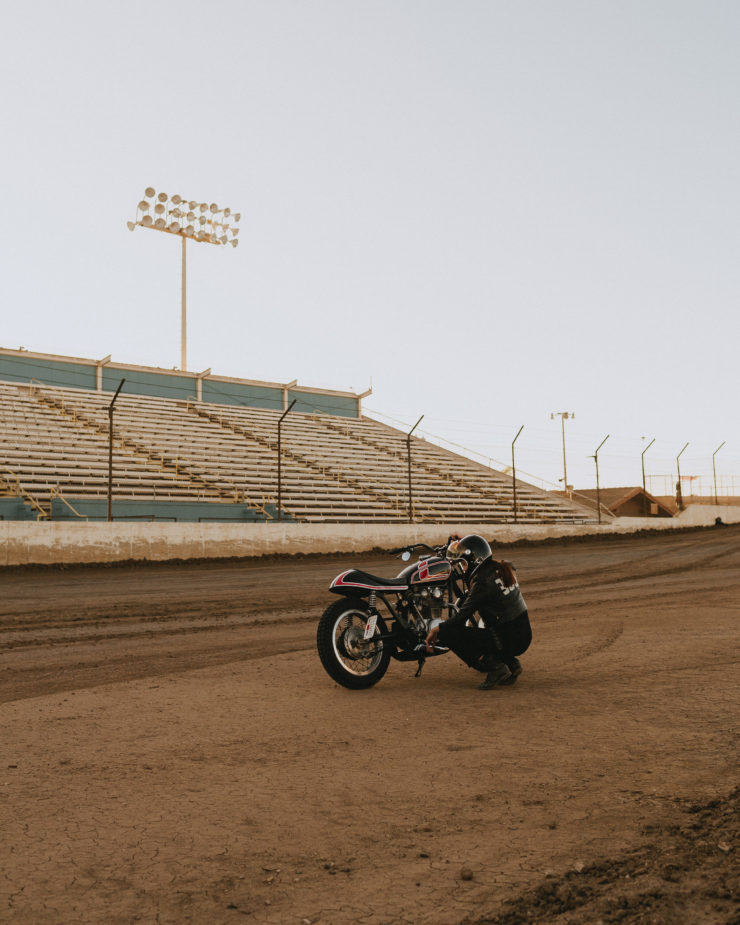 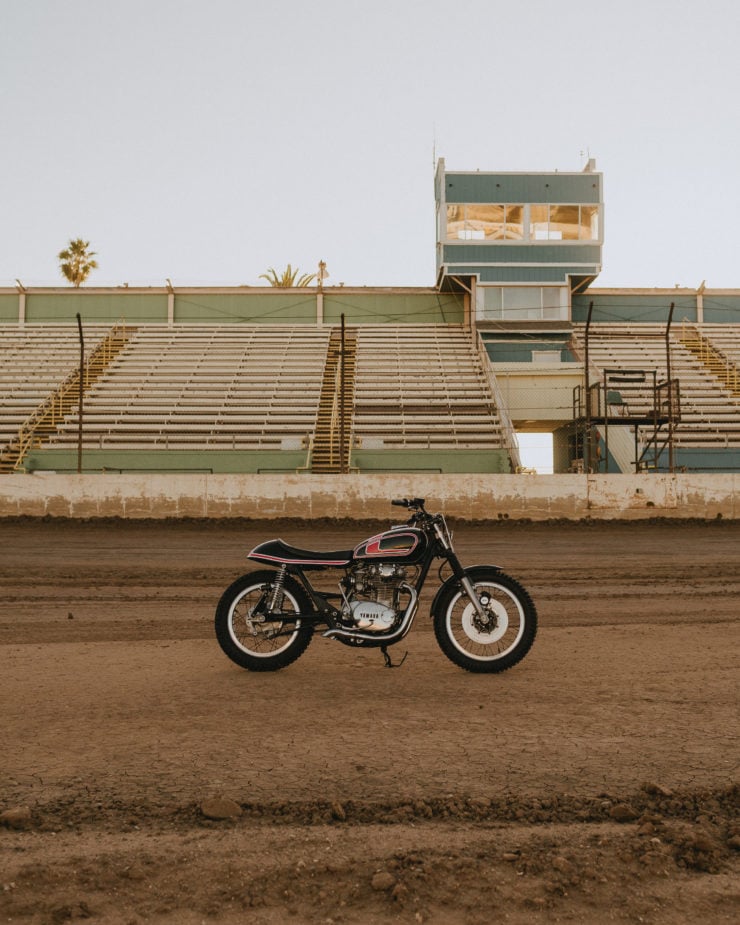 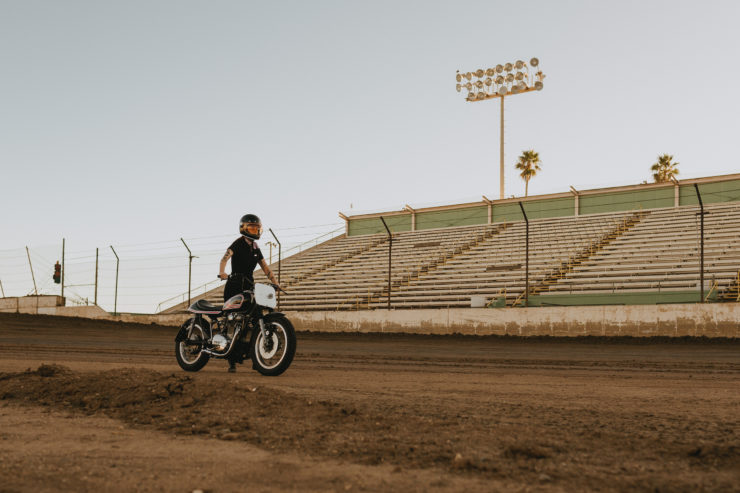 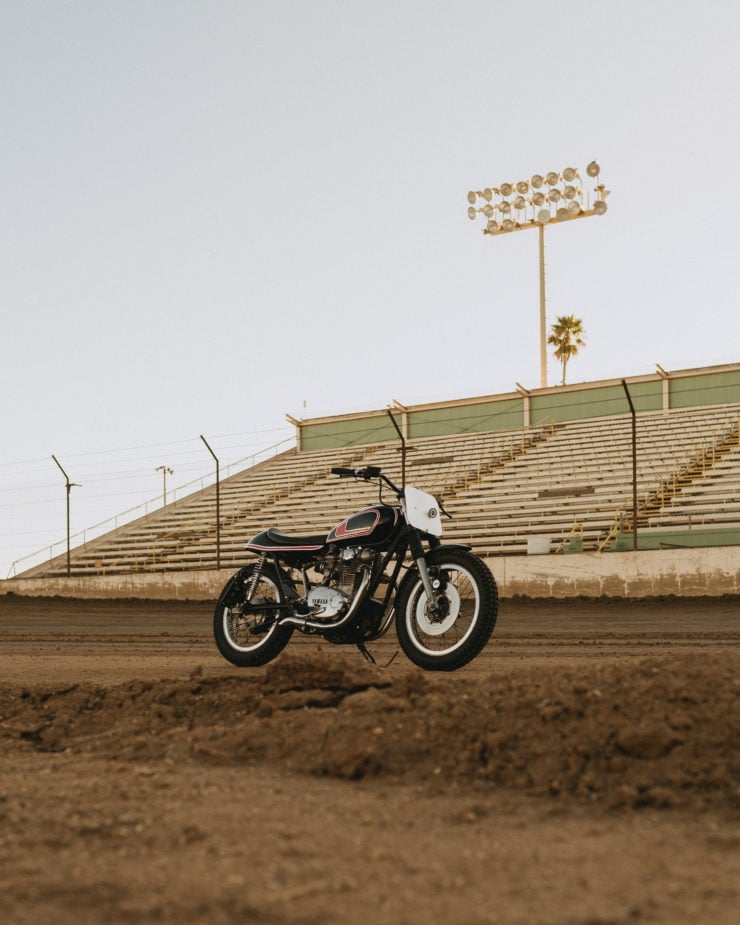