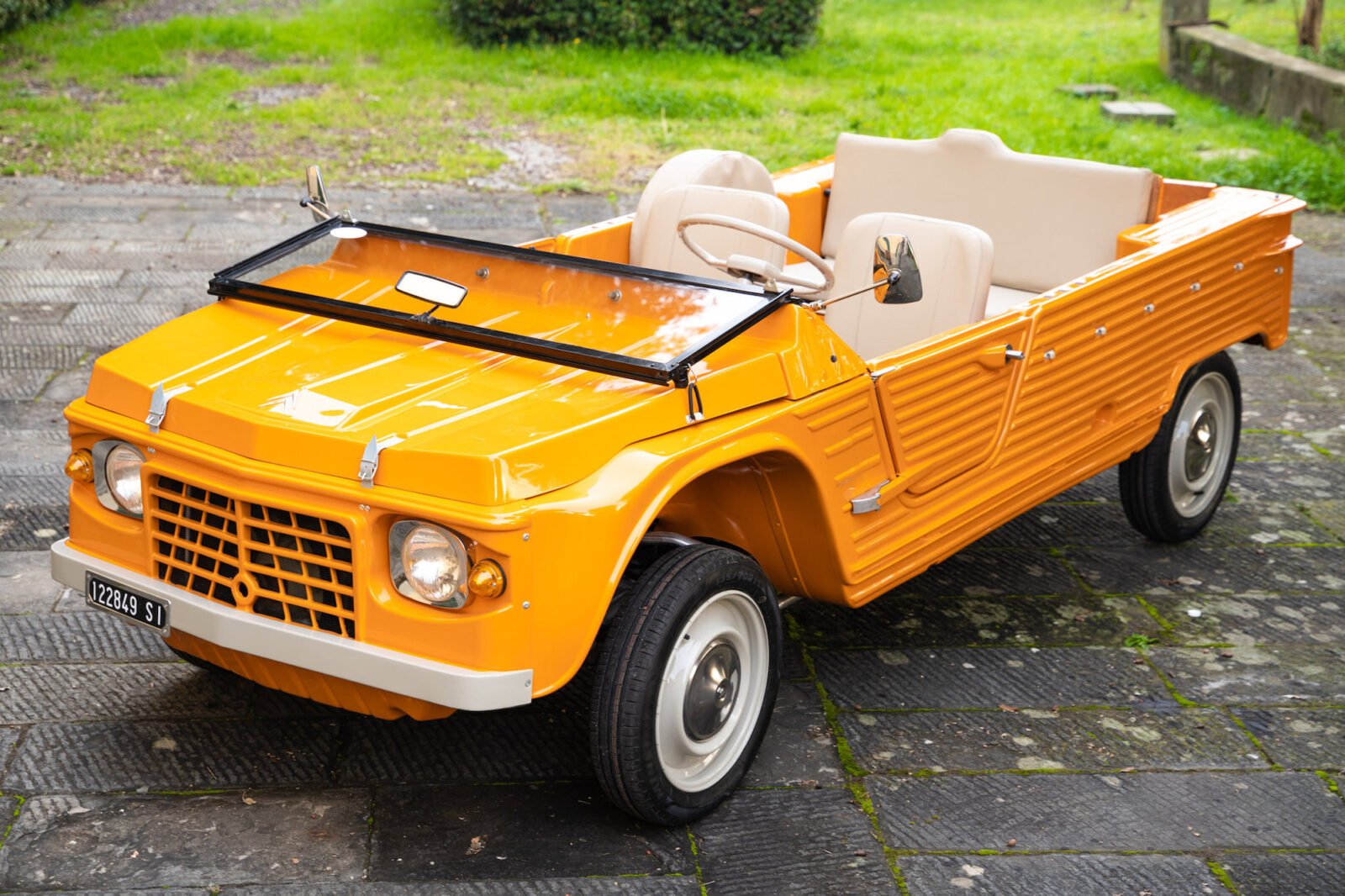 The Citroën Méhari was created as a French answer to the much-loved little Mini Moke, both were designed to be lightweight, inexpensive to buy, and cheap to operate, but unlike the steel-bodied Moke the Méhari would be one of the first production vehicles with a full ABS plastic body.

The idea to build a plastic French version of the Moke is attributed to French World War II fighter ace Count Roland de la Poype, the head of French company SEAB. He realized that ABS plastic would have considerable benefits over a steel body, the two key advantages being the fact that it wouldn’t rust and it’s very light weight.

The Mighty Méhari – A French Moke

De la Poype took his inspiration from the Moke but he believed he could design a better car, the Moke was somewhat limited by its low ground clearance, stiff suspension, and rust-prone stamped steel body.

So with the Méhari he worked on solving both of those problems, first with the use of the aforementioned ABS plastic body and secondly by utilizing the Citroën A-Series chassis and running gear, also used on the Citroën 2CV, Dyane, and Ami. 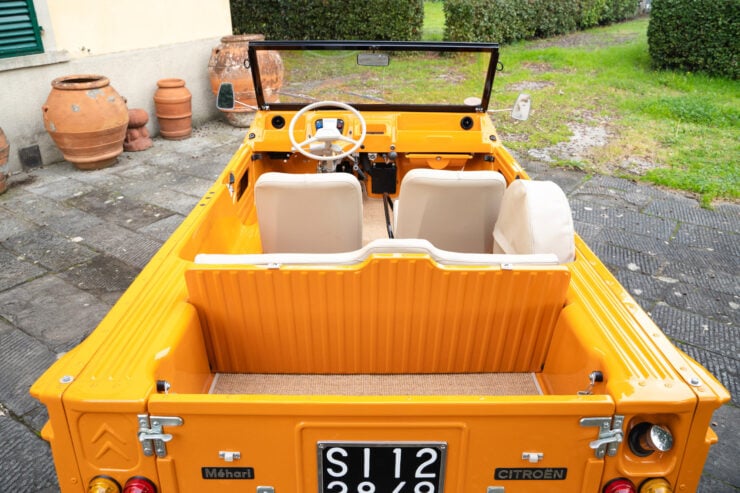 Above Image: The car offers seating for four and there’s some additional room for luggage in the rear, with a fold down tailgate for easy access.

The Citroën A-Series platform made use of a steel chassis, independent suspension on all four wheels, and a simple front-mounted engine with front-wheel drive. The A-Series platform also gave the Méhari notably better rear ground clearance than its British counterpart.

Count Roland de la Poype was convinced that he was onto a winning idea, so much so that he developed a fully-functional prototype of the Citroën Méhari before he showed it to Citroën. SEAB was a supplier to the French automaker and thankfully they gave his design the green light for production.

The Citroën Méhari was named after a type of Camel known for its speed, which was possibly a little misleading but the car was also capable of traversing difficult terrain, so the comparison to camels was somewhat apt. The car would first be offered for sale to the general public in 1968, it would prove to be an almost instant cult classic, and factories in Spain, Portugal, Argentina, and Uruguay would produce their own local versions.

Interestingly the United States imported a number of Méharis in 1969 and 1970, they had to import them classified as trucks as they didn’t comply with current road safety legislation. The Budget car rental company offered Méharis to customers in the Hawaiian islands, which is how many Americans first became familiar with the model.

Over the course of the 1968 to 1987 production run over 143,000 examples of the Méhari would be built and many of them have survived to the modern day thanks to their rust free bodies. Companies like Méhari Club exist to keep the model on the road, you can buy anything you need including all new chassis, engines, and body parts.

The Citroën Méhari uses the same chassis, running gear, and drivetrain as its Citroën A-Series siblings, it’s powered by an air-cooled 602cc flat-twin engine capable of 29 hp at 5,750 rpm, and power is fed to the front wheels via a 4-speed manual gearbox. 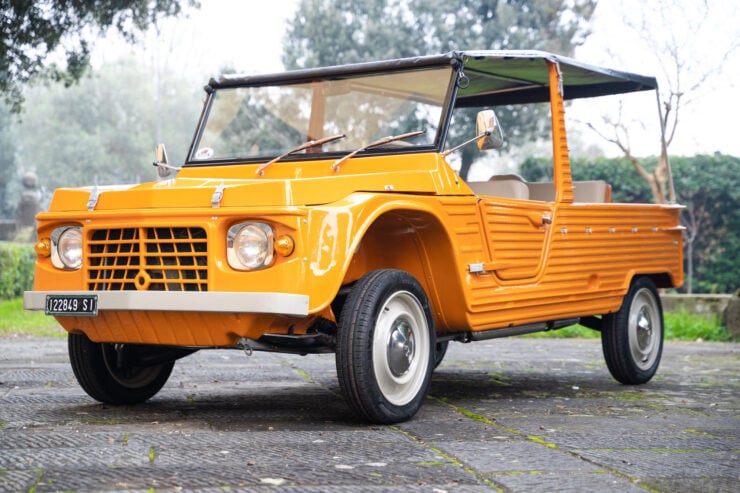 Above Image: The Méhari has a simple folding soft top for rain and run protection, but it offers somewhat little protection from serious weather.

The top speed of the Méhari is 62 mph or 100 km/h, though the car was never designed for sustained high speed use. The key reason that 62 hp engine is able to get the car up to 100 km/h is the low curb weight, the car tips the scales at just 1,157 lbs or 525 kgs, largely thanks to that lightweight plastic body.

Due to the success of the Méhari, Citroën released a four-wheel drive version in 1979. Unlike the Citroën 2CV Sahara 4×4 which used one engine at the front and one at the back to provide four-wheel drive, the Méhari 4×4 used a more traditional single engine up front sending power to all four wheels.

The Méhari 4×4 can be easily distinguished from its 2×4 counterpart thanks to the spare tire mounted on its hood. It also has additional bumpers, and the 1982 model had flared wheel arches with larger wheels and tires.

The car you see here is a Citroën Méhari from 1972, it was purchased new and used in Siena, Italy by its first owner.

By the 1990s the car was looking a little worse for wear and it was taken off the road in 1995. Luckily the story doesn’t end there, the car was given a full body-off restoration with the frame, suspension, and body all receiving ample attention, with images in the history file to document it all.

The car has now been imported into the United States and it’s due to roll across the auction block with RM Sotheby’s in early August. The current price guide is $25,000 – $30,000 USD, if you’d like to read more about it or register to bid you can click here to visit the listing. 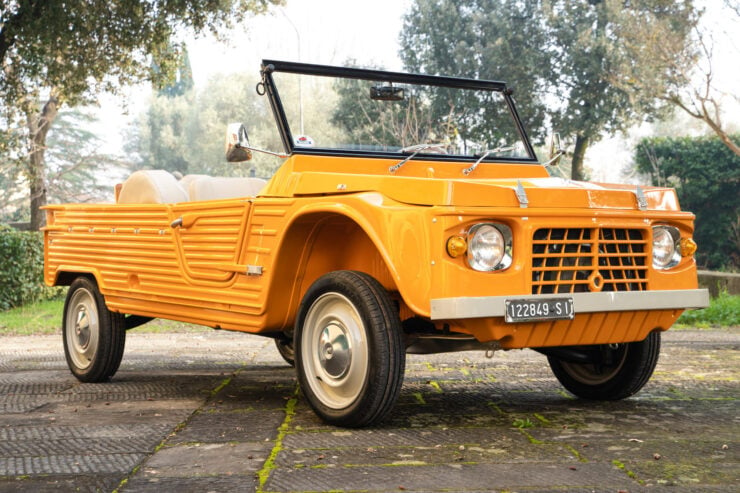 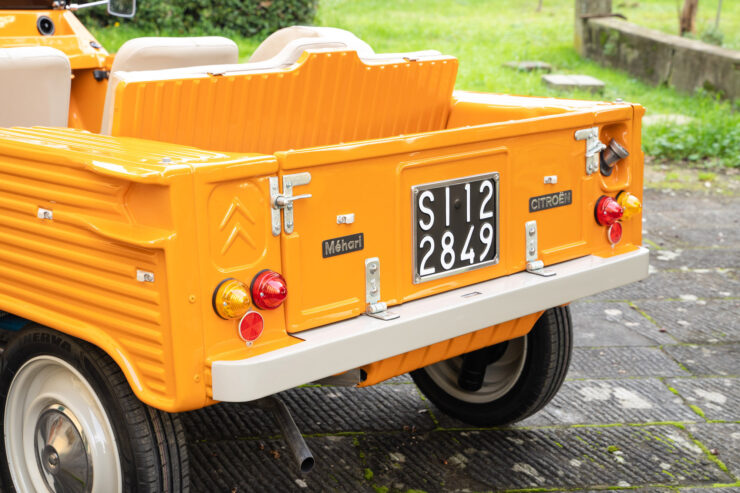 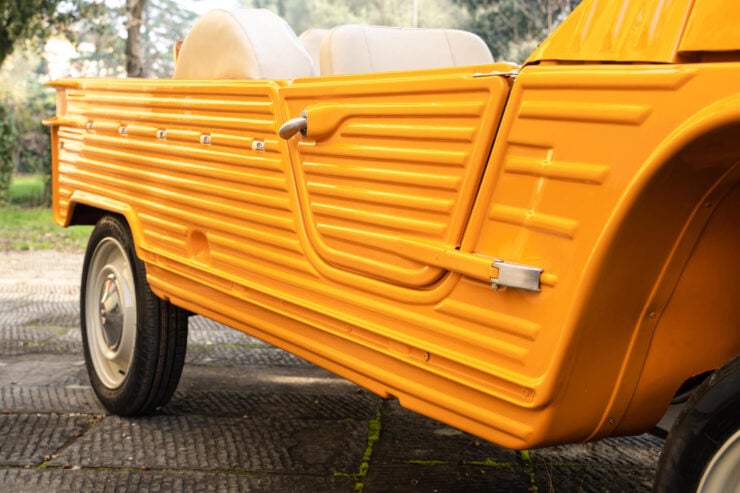 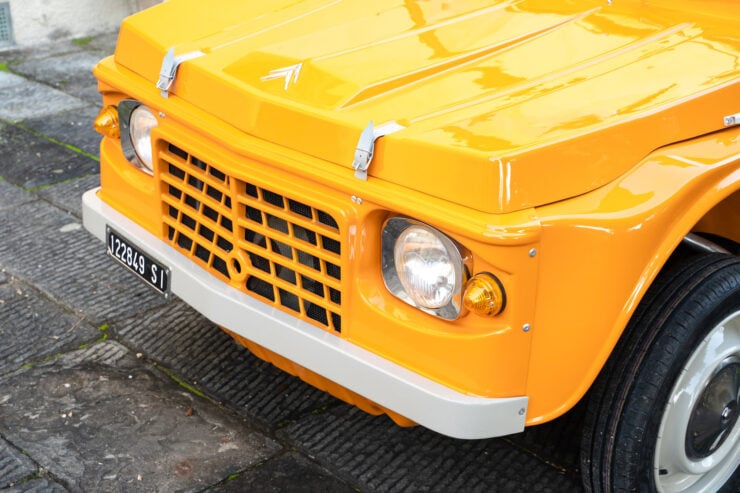 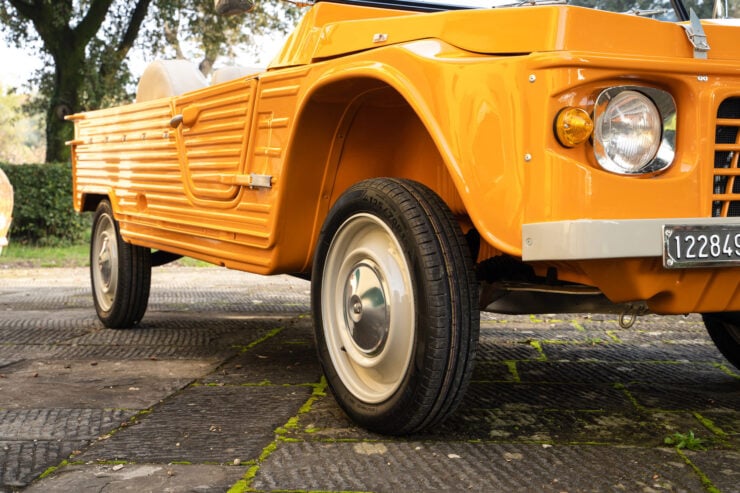 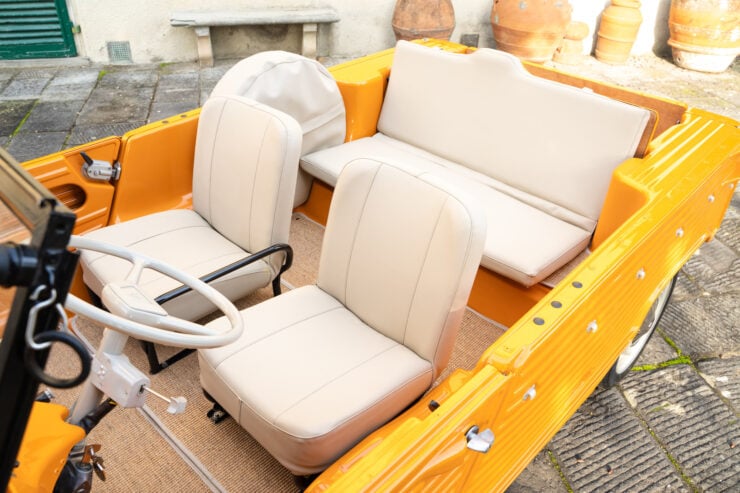 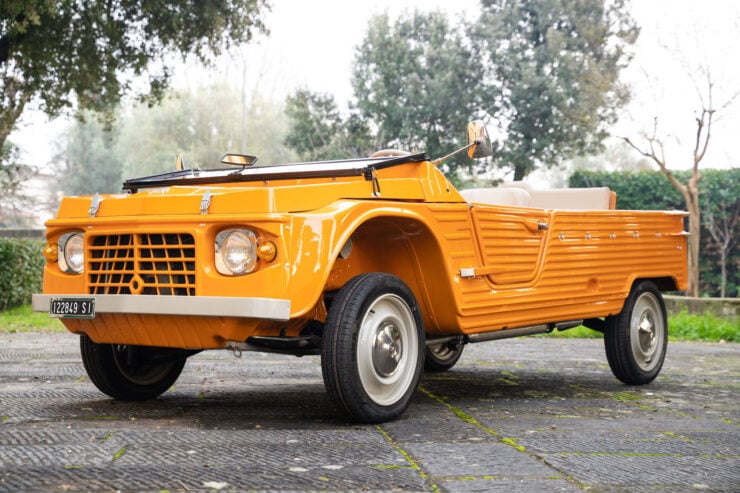 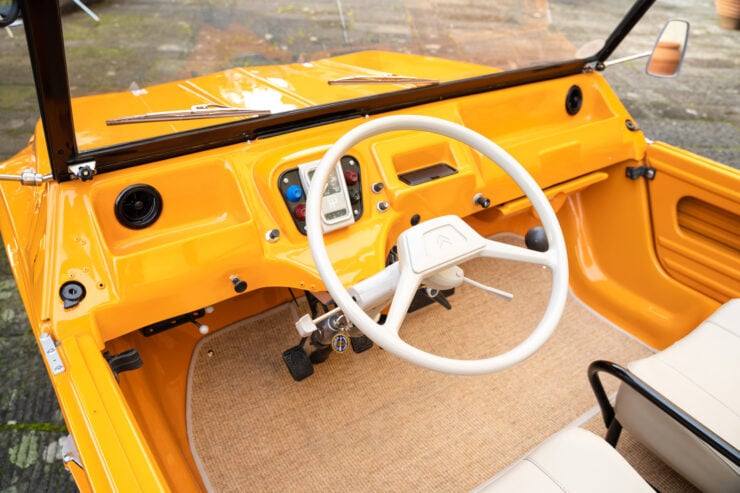 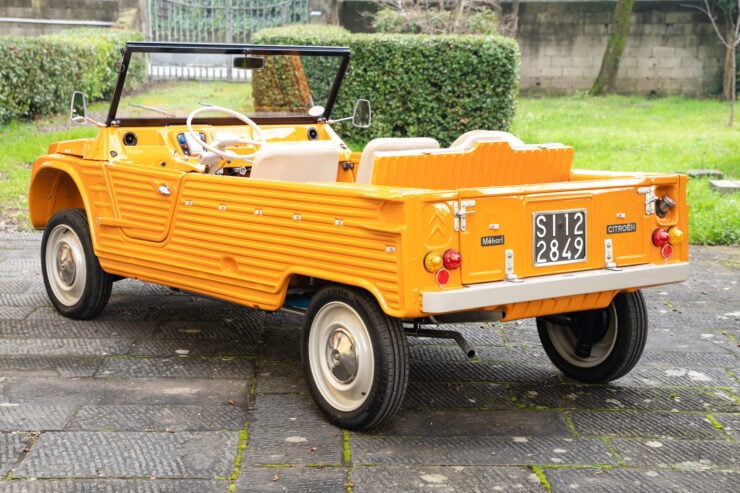