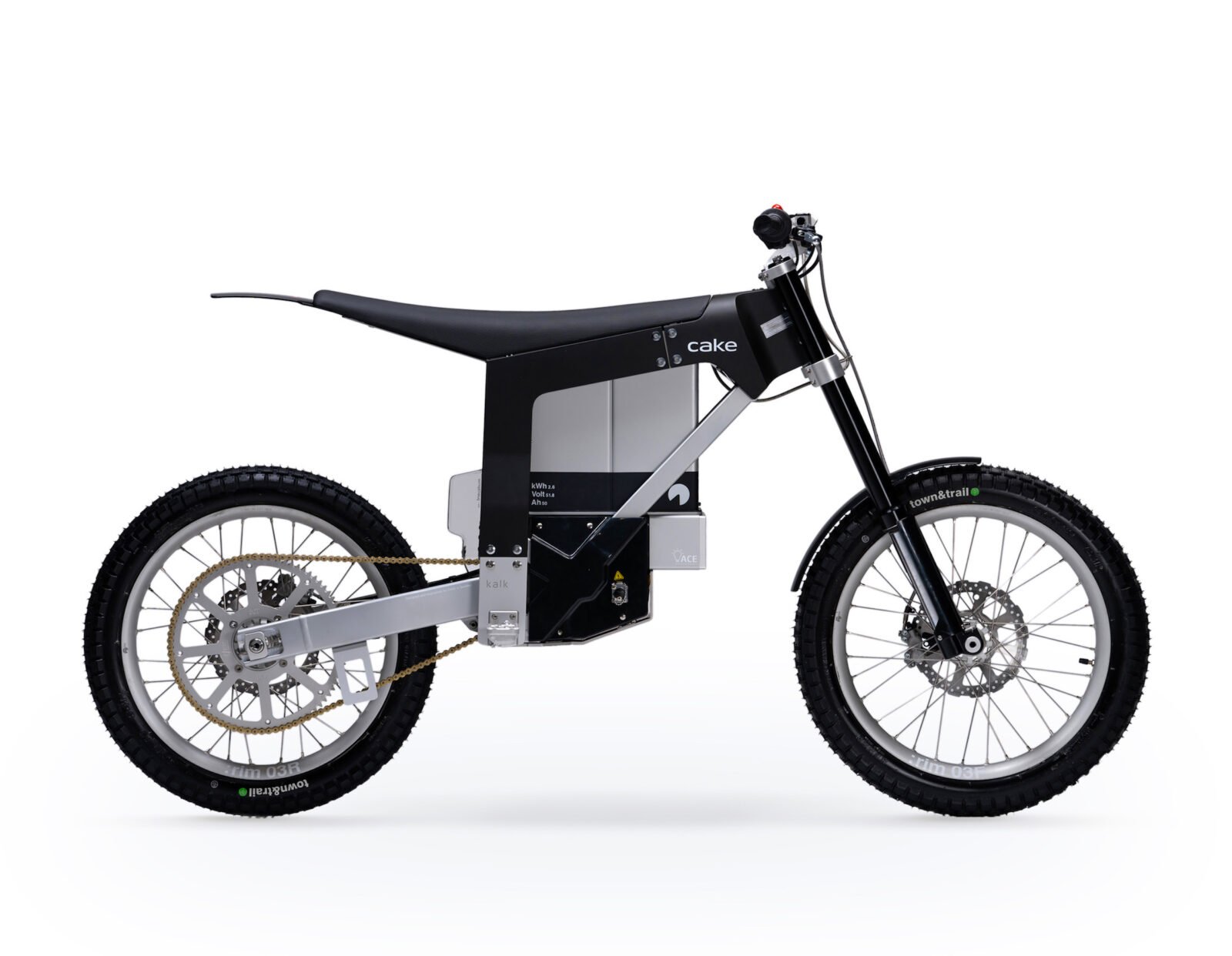 This is the Kalk INK, it’s an electric dirt bike from Swedish company Cake that was developed to offer lightweight off-road riding thrills with a 100% electric drivetrain.

With 185 lb ft of torque at the rear wheel and a curb weight of just 78 kilograms (or 172 lbs) the Kalk INK is a quick off-road motorcycle with up to 3 hours of range, an 80% recharge time of two hours from a standard wall outlet, or 3 hours for a 100% charge.

The Arrival Of The Electric Motorcycle

Electric vehicles have been around for a long time, the electric motor was invented back in the 1740s after all, many decades before the first internal combustion engine would see the light of day. Electric motors tend to be small and lightweight for their power output, and they’re mechanically quite simple with fewer moving parts that can fail.

Above Video: This episode from Sam Pilgrim shows the unboxing process of the Cake Kalk INK and his impressions riding it off road. Pilgrim is a professional freeride mountain biker with a slew of major competitive wins to his name.

The biggest hold-back for electric vehicles has always been not electric motor technology but battery technology – an issue that is now improving at a rapid pace due to the invention and continued development of lithium-based batteries.

That isn’t to say that the battery issue has been solved, this is likely still some way off, however it’s certainly much improved. The largest issue with electric vehicles now isn’t so much battery capacity as the cost of those batteries, something we will have to wait for the economies of scale to solve in time.

The first electric motorcycle patent appeared in 1895, it was filed by Ogden Bolton Jr. of Canton Ohio. These early designs were essentially just bicycles with an electric motor, a simple motor controller, and a battery.

In 1896 bicycle manufacturer Humber displayed their new electric tandem bicycle in London at the Stanley Cycle Show and a number of other electric bicycle/motorcycles would follow. In 1911 Popular Mechanics magazine described an electric motorcycle with an impressive spec sheet including a range of up to 100 miles and a top speed of 35 mph. 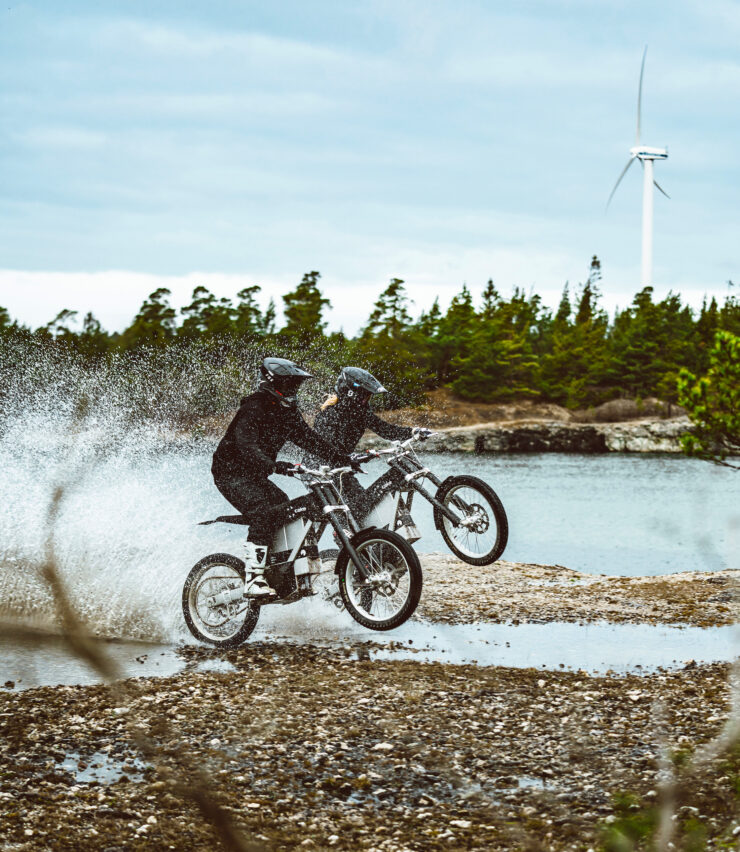 Cake electric motorcycles have become almost a class to themselves for many off-road riders.

Modern electric motorcycles typically make use of a lightweight frame, a small electric motor that may be either hub mounted or frame mounted, and they often have removable battery packs to make for easy charging and hot swapping.

Many of their other components, like suspension, brakes, lighting systems, wheels, and tires are all taken directly from the world of traditional internal combustion motorcycles to help lower costs.

As batteries continue to improve and become cheaper over time it’s likely we’ll see a tipping point, where electric motorcycles make more economic sense. However for the time being they still tend to be prohibitively expensive for many.

With the release of the Kalk INK, the team at Cake were seeking to provide a slightly more affordable electric dirt bike compared to the Cake OR model and the company’s dedicated off-road racing bikes. 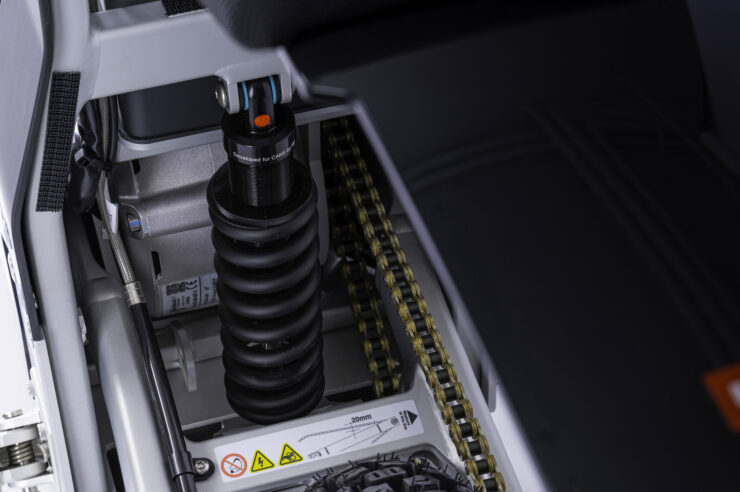 The Kalk INK has an upside down MX spring fork up front and an adjustable monoshock in the rear.

Despite the slightly lower cost it’s immediately clear that this is a Cake-designed bike, with its distinctive 6061 aluminium frame consisting of extruded, forged, and CNC machined parts.

Suspension consists of upside down MX spring forks with rebound adjustment up front that have been engineered specifically for this model. There’s an aluminum swing arm and monoshock in the rear, and a chain drive to the wheel that runs from the electric motor sprocket to the rear wheel sprocket.

Single disc brakes are fitted front and back, more than enough given the low curb weight of the bike. It rides on 19″x1.85” custom designed 7116-T6 aluminum motorcycle rims front and back with matching 19″ off-road motorcycle tires.

Power is provided by an electric motor producing 11 Kw and 42 Nm of torque at the crank, by the time this is multiplied by the 80 tooth rear sprocket it becomes 280 Nm at the rear wheel, or approximately 185 lb ft of torque. 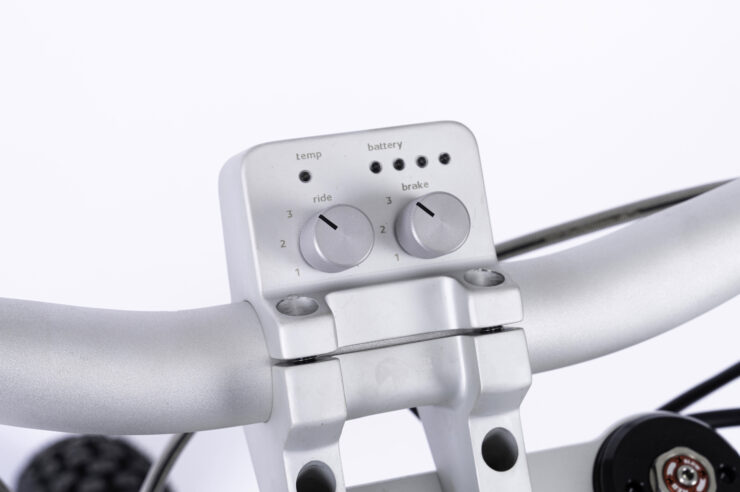 The bike has three distinct ride modes, the details of which are listed out below.

The battery pack is a lithium unit with 18650 cells and 50 Ah of capacity or 2.6 kWh. Importantly it’s removable so you can bring it inside for charging, or hot swap the batteries to keep riding. 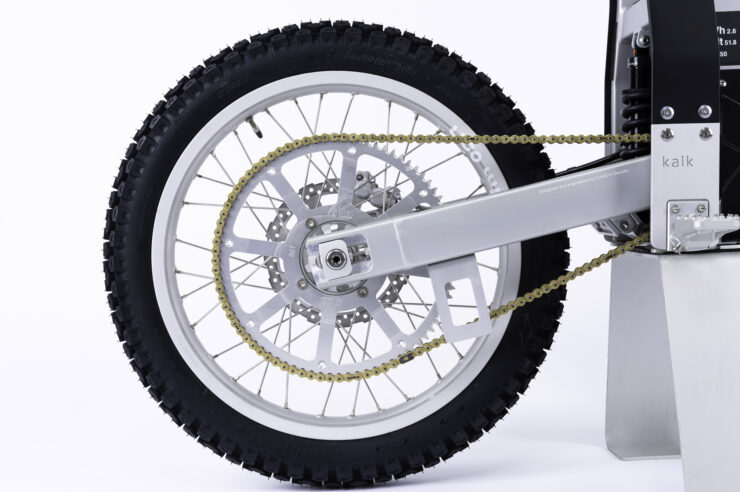 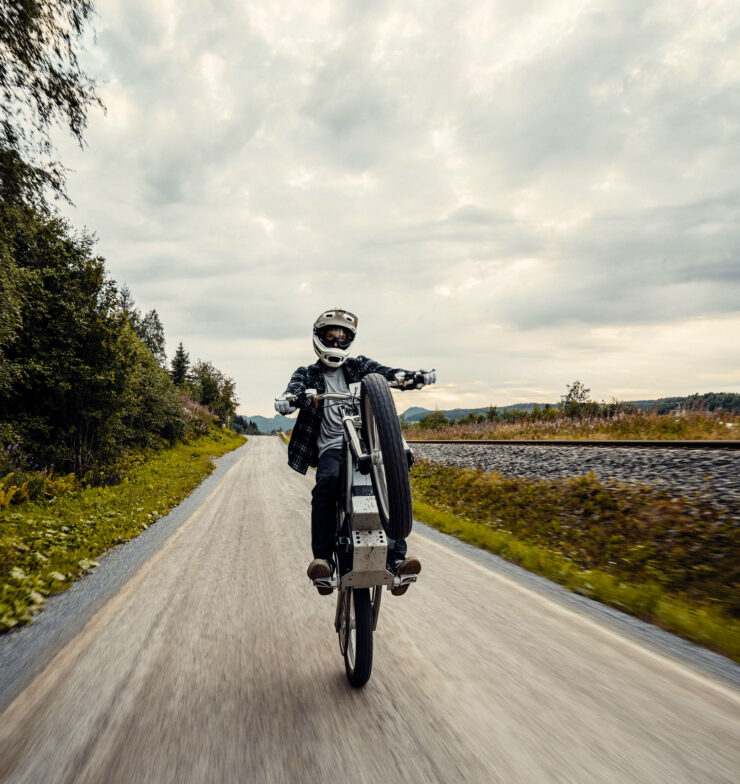 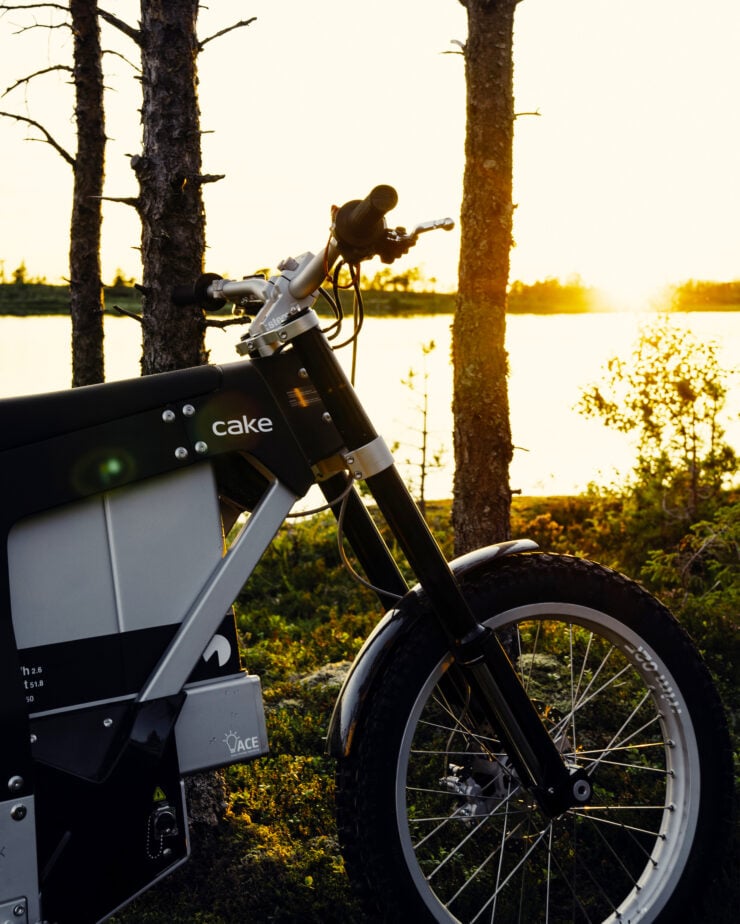 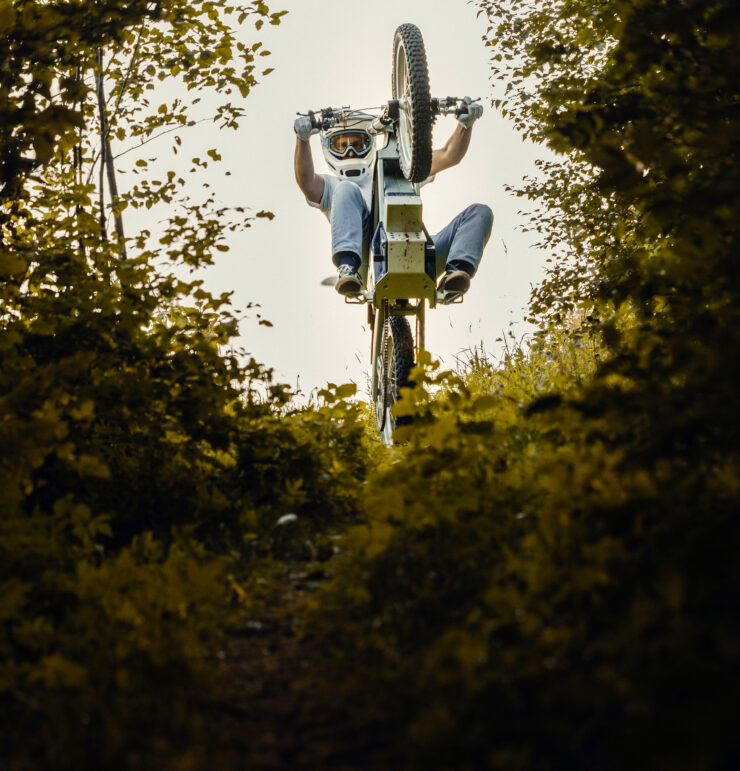 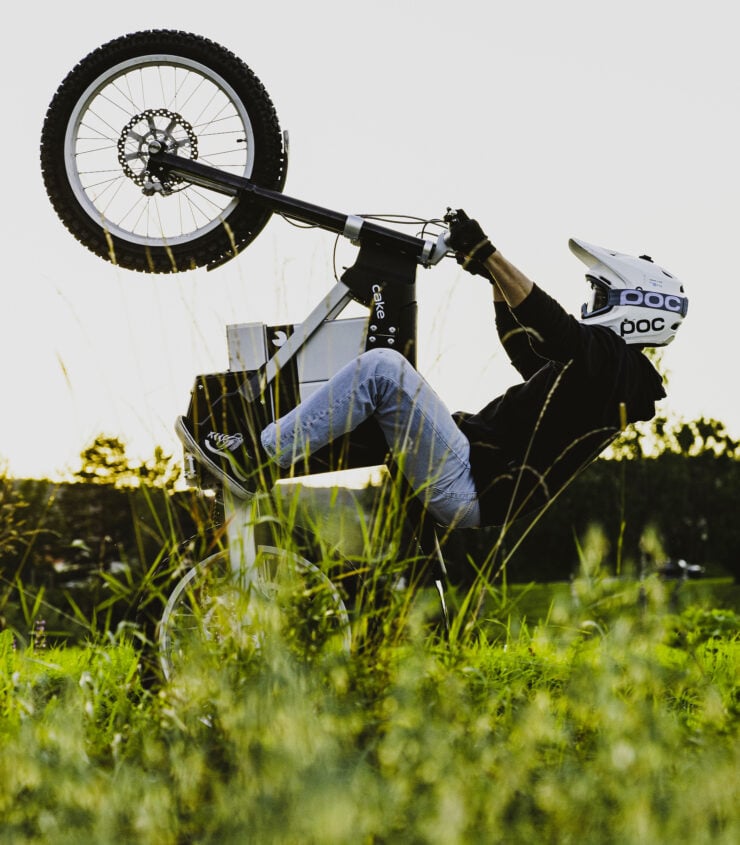 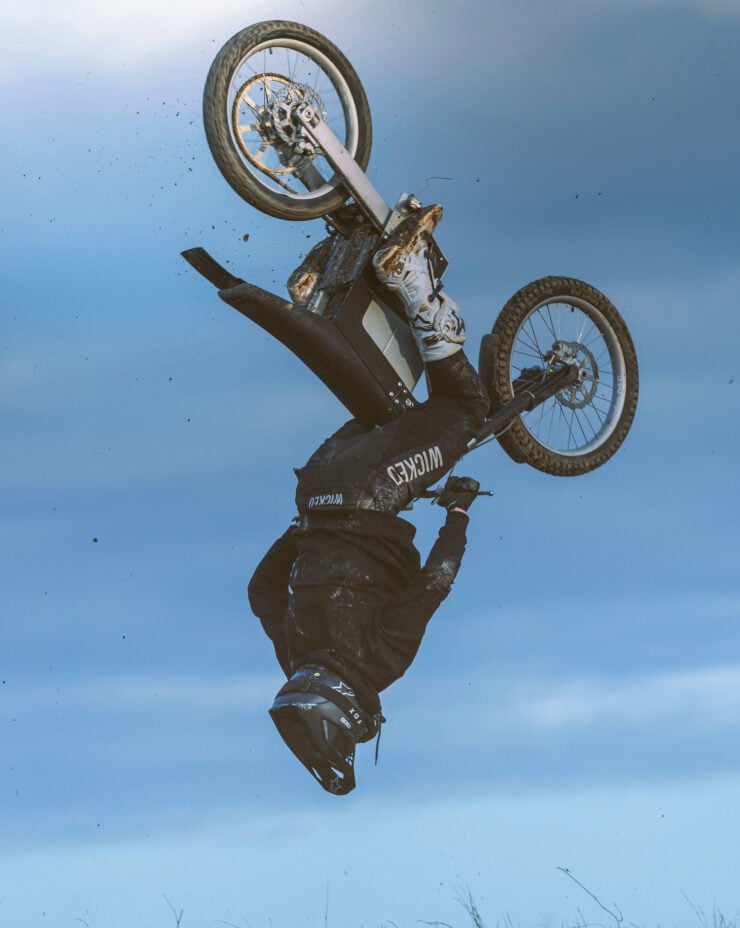