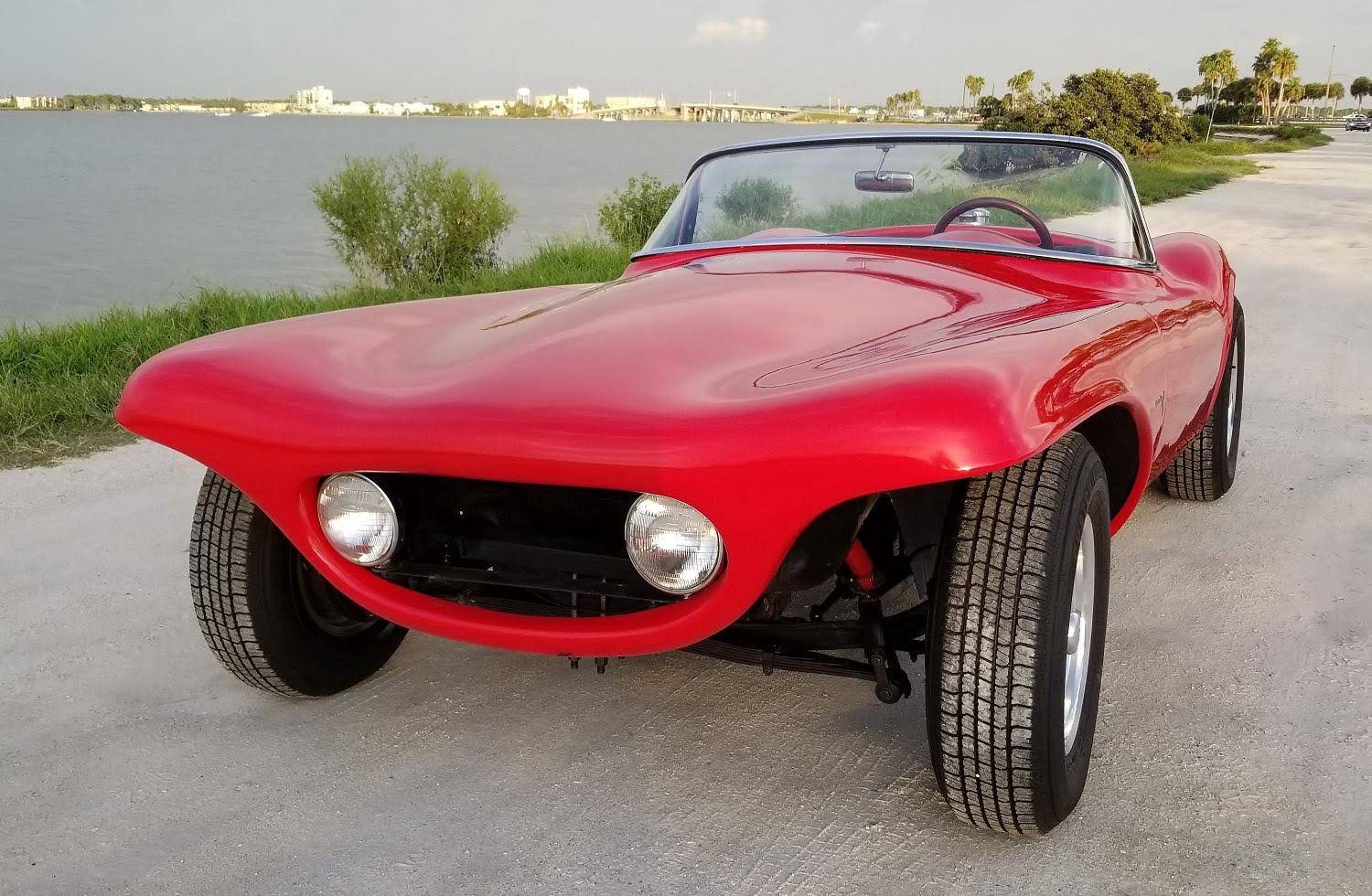 Born in 1931, Noel Bangert had a penchant for design – and people noticed. Upon graduation from high school he had planned to go into the ministry, but in his early twenties he changed direction to his other passion – car design.

In the early 1950s, designing your own sports car was all the rage. Magazines showed how to use fiberglass to build bodies and books promoted how to take a concept from two dimensions to full-size prototypes. And believe it or not – people did it. John Bond, owner of Road & Track magazine in the 1950s was quoted as saying that nearly 1,000 or perhaps more hand-built low-production “specials” were constructed in America during that time. Sadly, few remain today.

Noel’s first design and “build” was for a company called “Hollywood Plastics.” This company was started by Gerry Huth and Bill Campbell and the first body they offered was called the “Campbell Sports Body”. Bangert lent his designs and talents in making the mold and body to help offset the costs of building his first car – “The Stag.”

The Debut of the Bangert Stag

The first ads for this car appeared as part of Hollywood Plastics publicity. Then two magazine articles appeared about his car, one in “Motor Life” and another called Badge Bar Journal. Sales and promotion grew accordingly and Bangert started to expand his company. 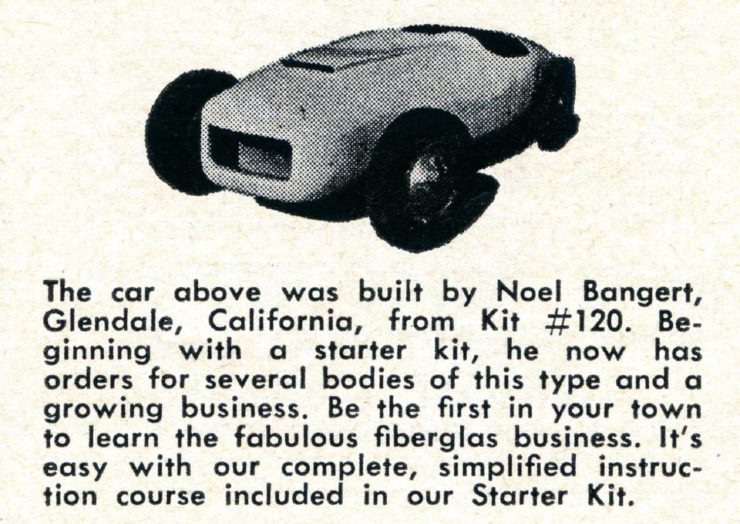 The Stag proved popular as a race car design and was famously used as the body for the “Baldwin Special” – driven to success by Bill Pollack at west coast race tracks such as Willow Springs. In researching the Bangert sports cars, I became friends with Noel Bangert late in his life.

When I asked him about the design of the “Stag,” he shared that he had designed the car to be very similar in size and shape of the Indianapolis 500 race cars of the day – a fuselage shape. He wanted race and sports car enthusiasts to be able to build a sports car version of an Indy 500 car for legal use on the road. A very interesting idea. 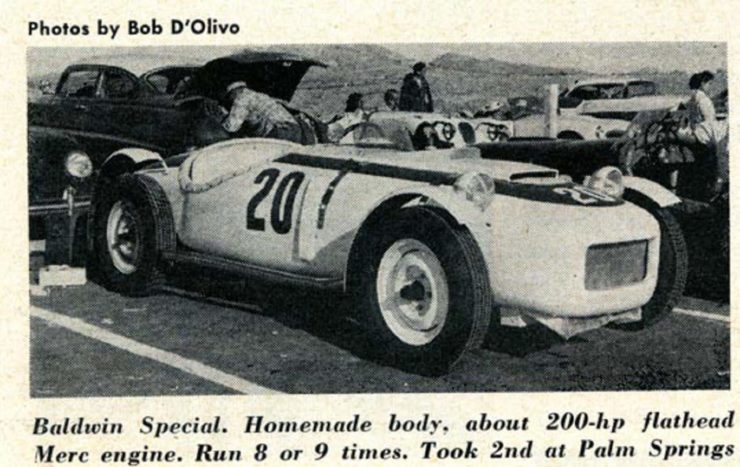 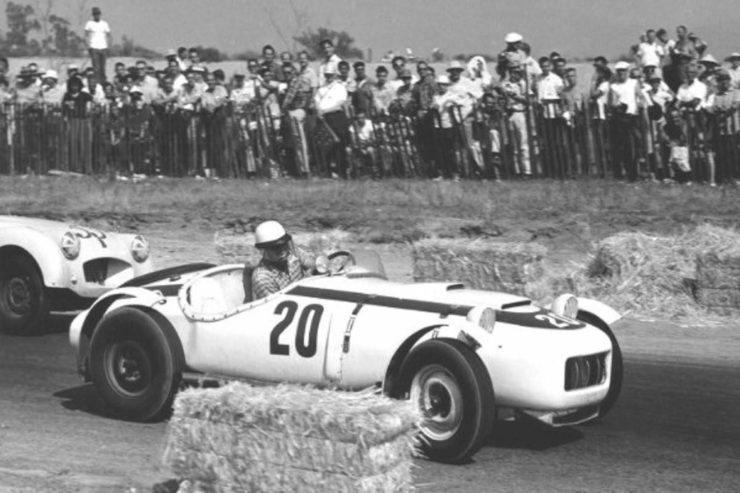 You can see Noel’s talent for design in his use of “posters” for his company. These posters promoted different designs and modifications one could make to the body and ways to build the sports car.

Some versions were shown with cycle fenders, some without, and some with uniquely designed fenders that ran the length of the body. The poster showed a multitude of ways you could use the Stag body and uniquely create something for your own sports car. Check out his 1954 poster below. 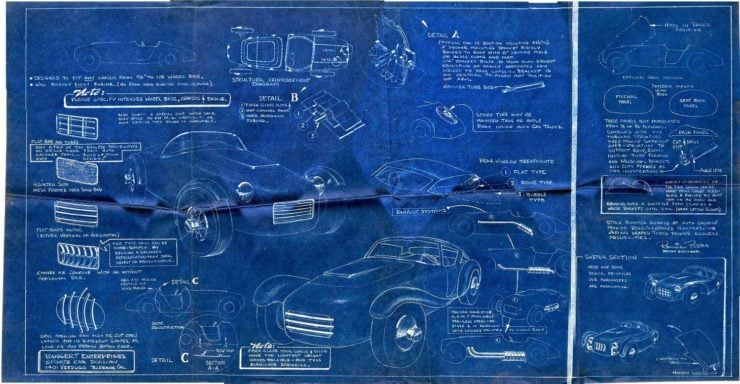 Builders loved the posters he created for each of his cars, and while other companies took a similar approach, none were as creative and informative as the one’s designed by Noel Bangert. What makes this even more interesting is the poster was the only instruction you received on how to build his car – and this was much more than most companies of the 50s.

Glasspar, Woodill and Victress had detailed instructions but most companies provided little or no instructions once you bought the body. Most just offered one piece of paper – single sided – on how to build a car that often took 1 to 2 years to complete. Talk about “brave new world!”

Noel was chomping at the bit to expand his company and the best way to do it was to expand his offerings. At the time (1954) America was replete with original designs coming out of the west coast, Detroit and other areas too. What really impressed Noel was when the Buick Wildcat II show car was released to the public in 1954.

A completely new design with open wheel wells up front. This design was from racing heritage which allowed a more efficient way to cool the front brakes. For a few years – 1954 to 1956 – many European sports cars utilized this open wheel well design. So did the Buick Wildcat II and the Bangert Manta Ray. 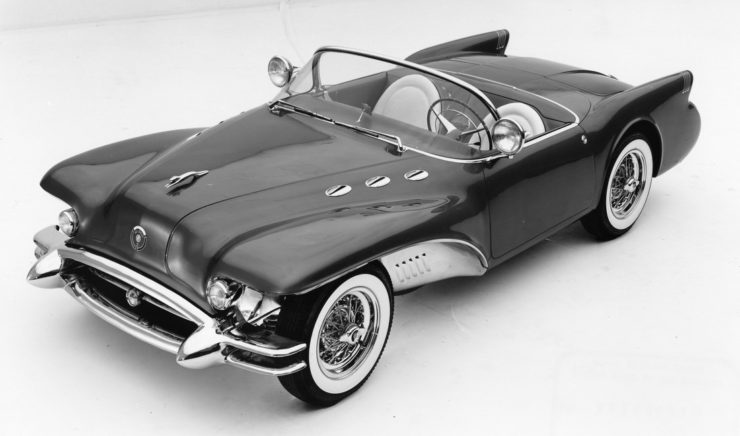 In designing his next car, the “Manta Ray,” Noel used the Wildcat II as his starting point (shown above) keeping the wheelbase the same (100″), but reducing the height of the body to give it a leaner and faster look. He put his thoughts to pen and paper with this creation and created another poster to showcase his idea and help others build it. His second poster is shown below. 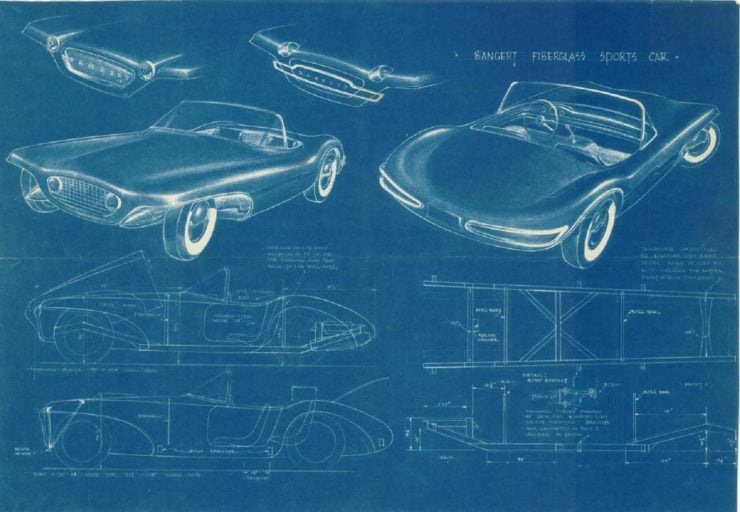 It was in 1955 that Noel launched his second offering – the “Manta Ray.” Simultaneously, he named his company – “Bangert Enterprises.” His tagline from here forward would be “Artistry in Plastics” and he used this on his letterhead, stationary and all company communication.

In the summer of 1955 he introduced the first version of the Manta Ray – and he did it with style. The launch was supported by a full page feature in the June, 1955 issue of Road and track. Three nice photos and a short write up sealed the introduction in a major publication. Nicely done by Noel and the staff at Road & Track. 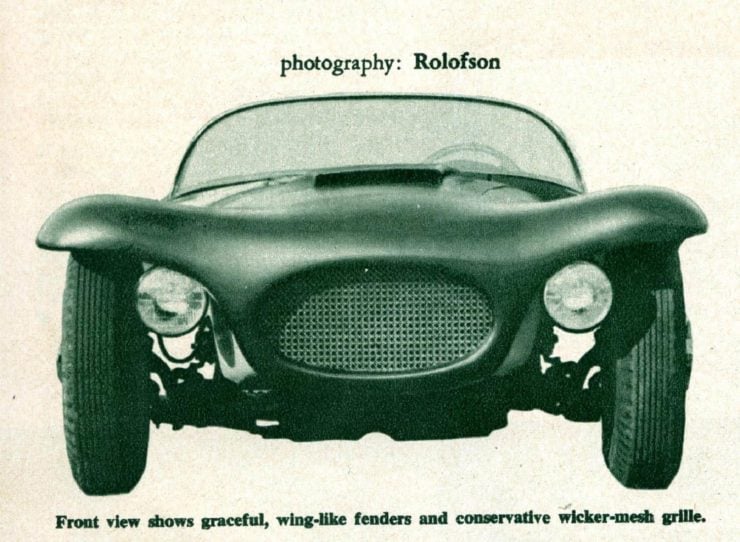 Magazine advertisements helped introduce the car to the public with the release of press kit photos too. Both are shown below. 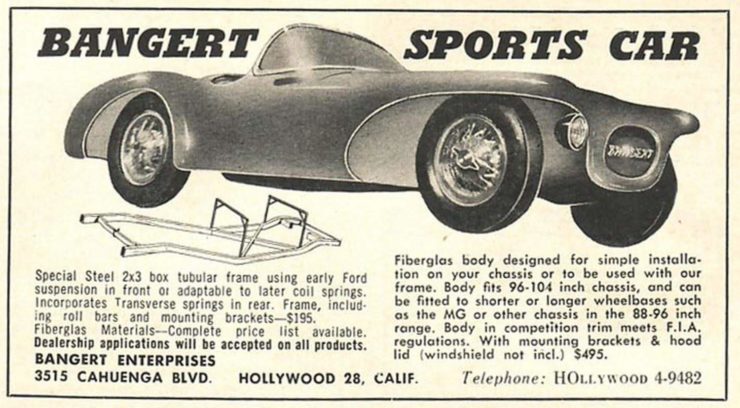 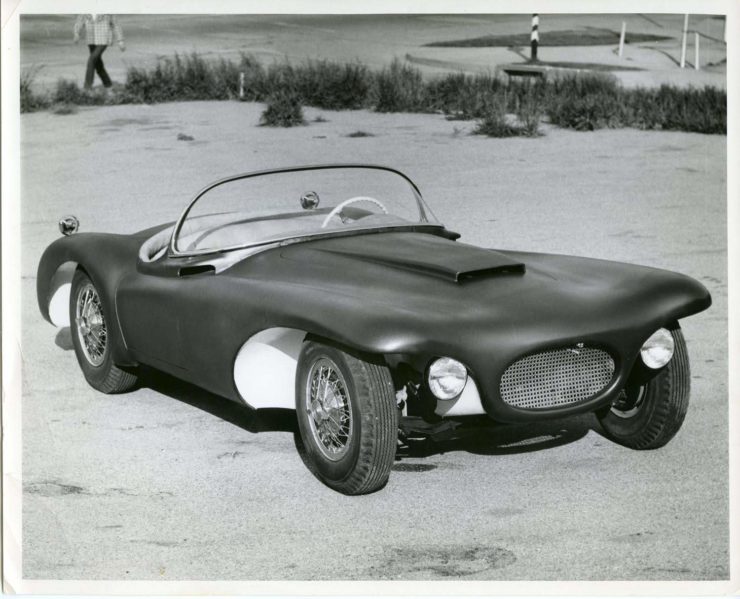 He finished 1955 with a showing of his Bangert Manta Ray at Petersen Publishing’s 1955 International Motor Revue – also called the “Petersen Motorama.” This would be Petersen’s last Motorama for nearly ten years bringing an end to an era for Petersen Publishing. 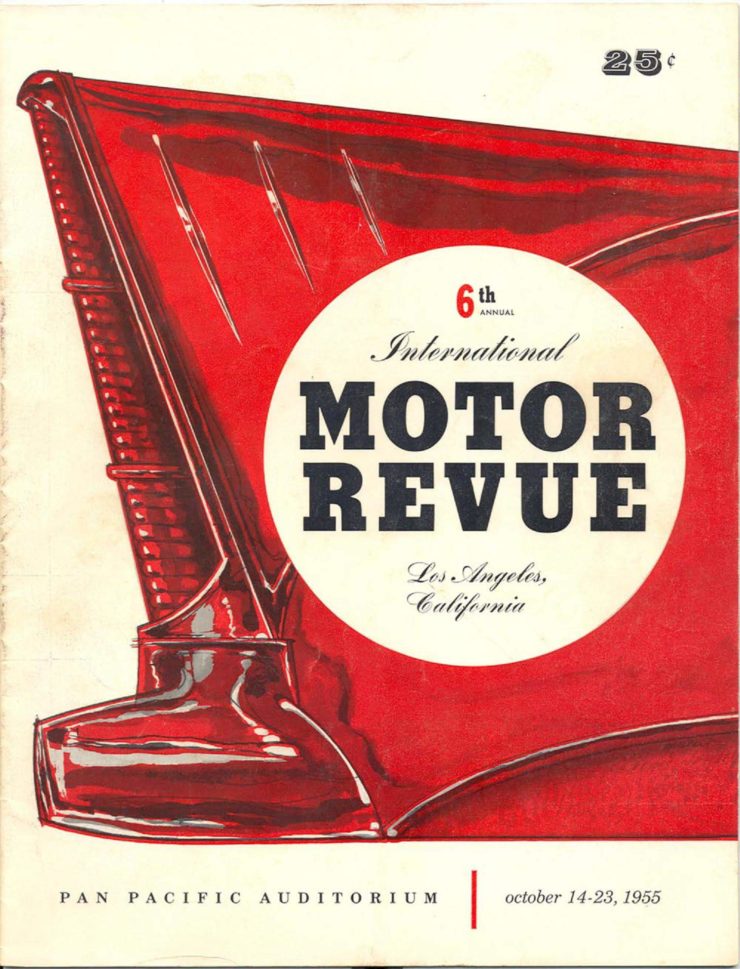 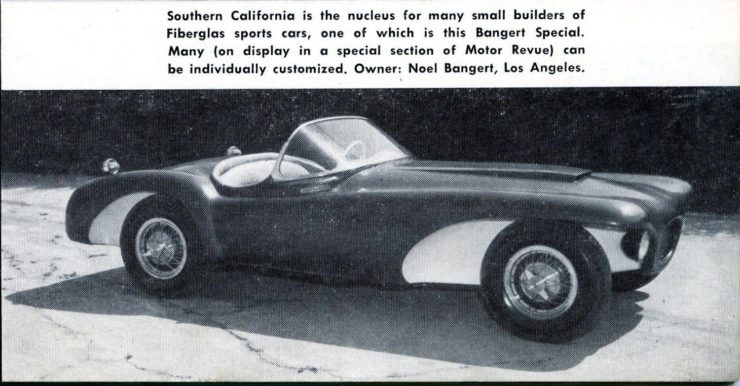 Noel continued selling this design as well as his first model – the Stag – for about a year. But in early 1956 he made a change. He widened the front grill area a bit so that the opening was larger and more oval shaped and he promoted it to interested customers at local shows. Here’s one of his promo pieces – a postcard – showing the “launch” of the newly styled Manta Ray which is dated on the reverse side with a postmark. 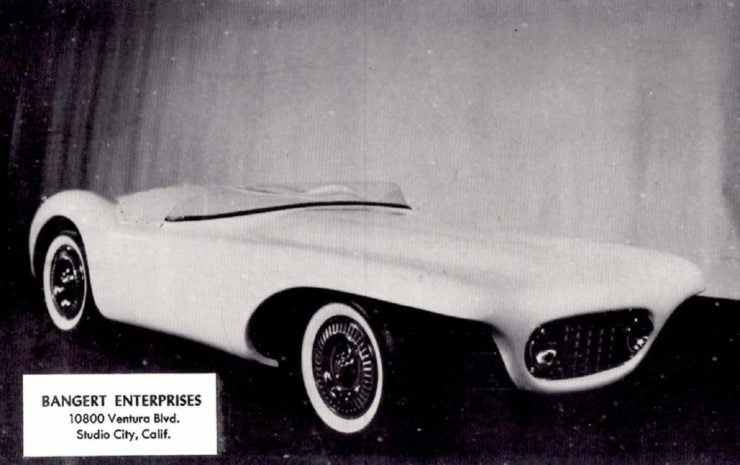 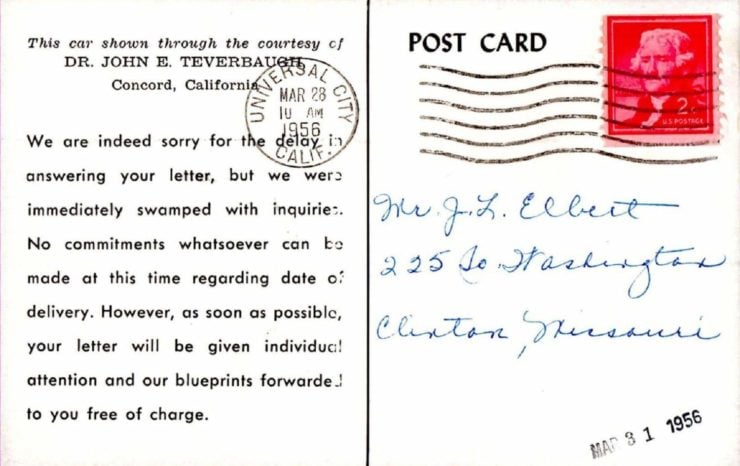 Throughout 1956 and 1957, Bangert continued to promote this new design. Then, late in 1957, another excellent “photo op” came when Paramount movie studio used his Manta Ray sports car for the opening of the movie “Devil’s Hairpin” – a racing movie. This movie starred Cornel Wilde and Jean Wallace. The photo is shown below. 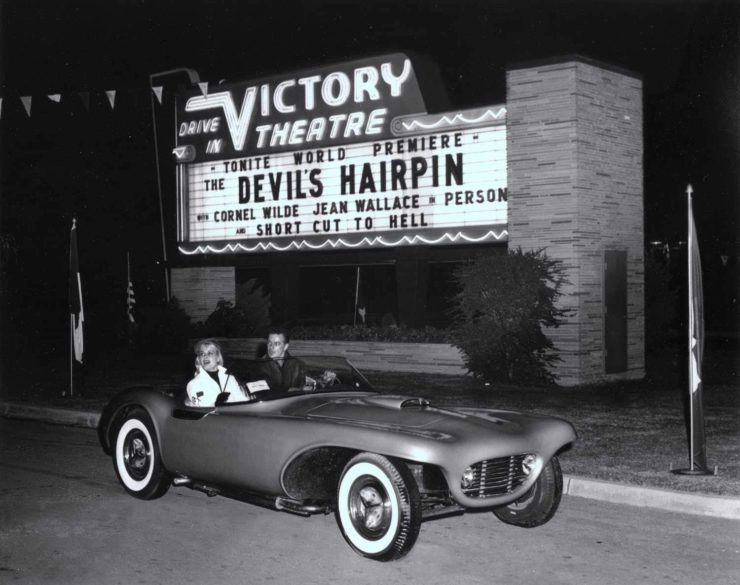 But it didn’t stop there. As with the Bangert Stag, the Bangert Manta Ray was popular with the racing crowd and two photos which appeared in magazines are shown below in 1957 and 1958.

Above Image: Here a Bangert Manta Ray is about to overtake a Porsche Powered Mistral (Sports Car Engineering, Bud Goodwin, Spyder). Shown in the April, 1958 issue of Motor Life Magazine.

Few Bangert sports cars exist today. No examples of the Bangert Stag have been found and just four examples of his Manta Ray are known to exist. Two of these are race cars and two are sports cars. As for the third and final sports car that Bangert designed and released to the public, that’s for a future story which we’re looking forward to sharing with you soon.

For those of you interested in adding a Manta Ray sports car to your museum or your collection, we have one available for you today. Photos of our car appear below and you can click on the following link to learn more: 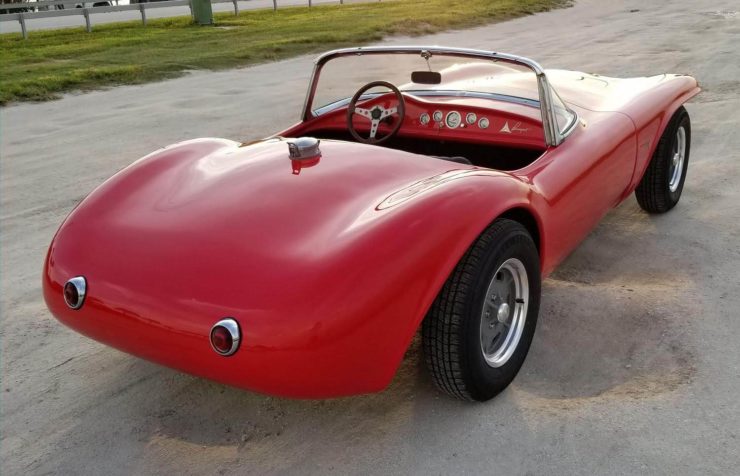 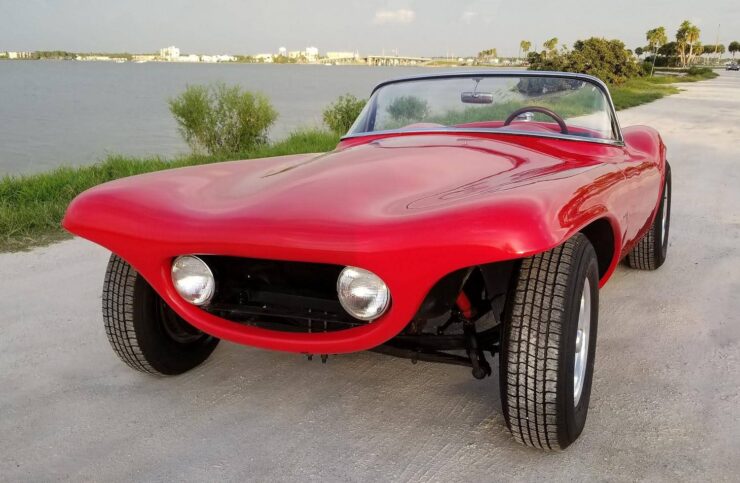 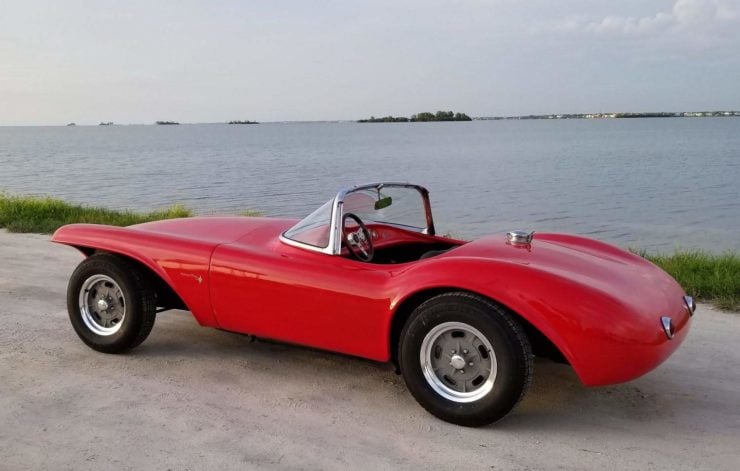 Geoff Hacker, PhD has pursued rare and unusual for over 40 years. He is now the premier researcher, archivist and author of the history of handcrafted American sports cars. Hacker owns Undiscovered Classics which finds and restores these rare cars. Their work has led to multiple showings at prestigious concours events including Pebble Beach and Amelia Island. Undiscovered Classics work have been seen on television including Jay Leno’s Garage, AmeriCarna, and the “Barn Find Hunter.” Hacker’s work has been published extensively in both print and electronic media. For in-depth information visit Undiscovered Classics