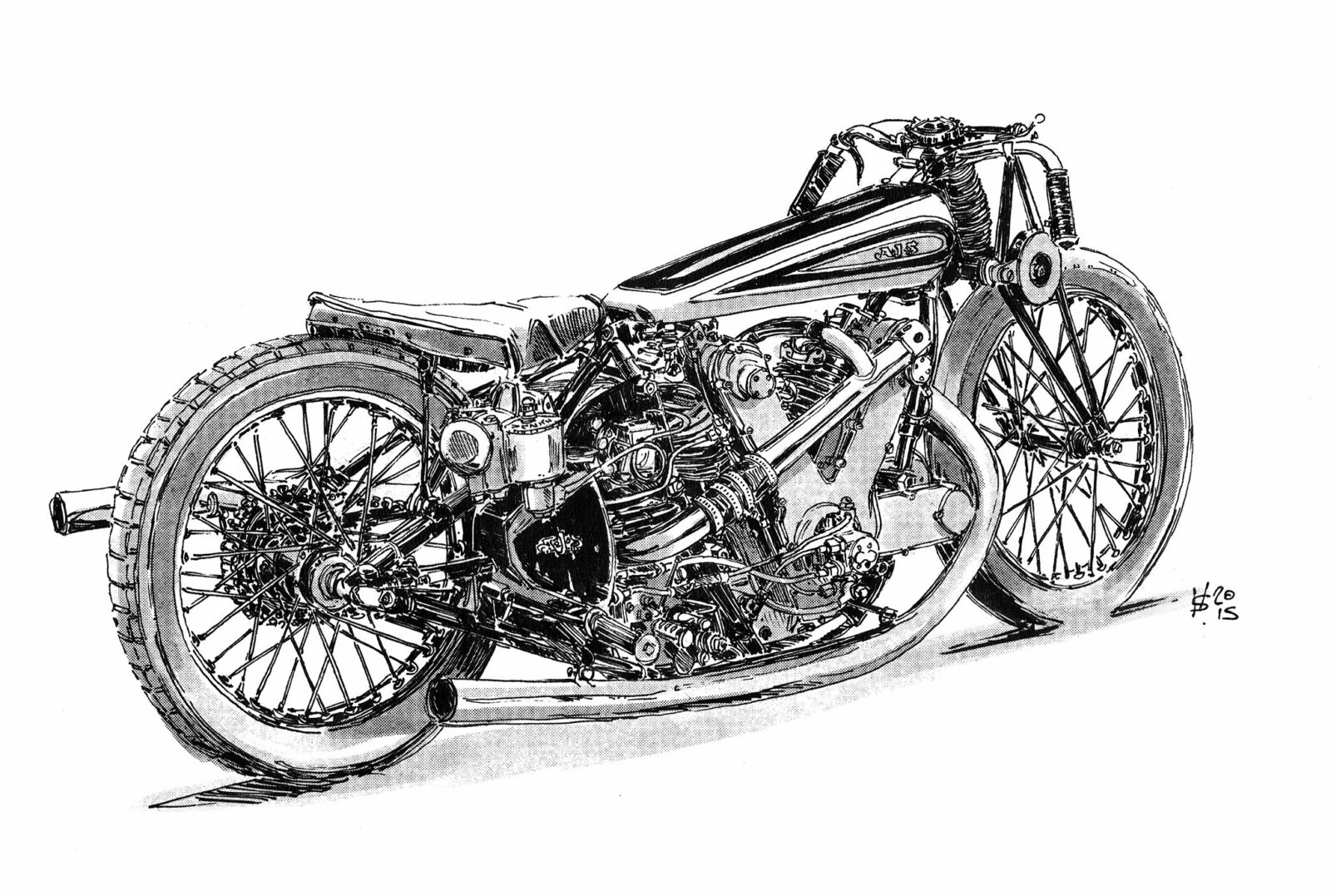 “Motorcycle Specials” is a new series of articles by Martin Squires documenting a range of adapted and often one off machines, whose creators have prioritized function over form. These built for purpose machines giving us an insight into the motorcycle industry of the time as well as the riders and creators of these fantastic machines.

To start the series I have chosen the overhead camshaft V-twin AJS record attempt machine which currently resides in the National Motorcycle Museum, Birmingham, England. Built at the Wolverhampton factory with the aim of breaking the world motorcycle speed record, the target speed for the machine was 150 mph, an ambitious 15 mph faster than the existing record of 134.75 mph held by Germany’s Ernst Henne on a supercharged 743cc BMW.

1929 AJS Record Attempt Machine circa 1930: as it appeared in its unsupercharged form at Arpajon, south of Paris, August 1930.

The first incarnation of the machine used an engine based on a pair of R10 overhead camshaft barrels, bore of 79mm and stroke of 101mm, giving just shy of 1000cc. These barrels were mounted in a 50 degree V-twin configuration and the engine was un-supercharged at this point. The barrels were steel with hardened bores while the heads were aluminum with cast-iron valve seats and bronze valve guides.

The barrel and head configurations would change quite rapidly from cast iron barrels to iron barrels turned from solid steel. Another change early on was to the barrel inlet positions, originally both were rear facing but an alternation meant they were both in between the barrels. Such is the life of a developmental record attempt machine.

This bespoke V-twin was mounted in a large duplex frame with a 60 inch wheelbase and most notable parts of the frame were the 2 inch top tube and the large head lug. The handlebars were in two halves, allowing for an adjustable dropped bar position, perfect for record breaking. Gearing was provided by a three speed Sturmey-Archer with ratios of 3.2, 4.3, and 7.8:1.

George Rowley, a works rider for AJS, test rode the V-twin on the Wolverhampton to Bridgenorth road on its first shake down run. He was reputed to be pushing 100 mph on this public road and being able to hit those speed on a public road that gives little opportunity for such speeds is a real feat, but he did have 70 bhp at hand to achieve this.

In July 1930, Captain Oliver M. Baldwin rode the AJS at Brooklands in preparation for the official record attempt in Arpajon, south of Paris. August 1930 saw Baldwin reach 130 mph during the official attempt in France, before suffering piston seizure in the rear cylinder. 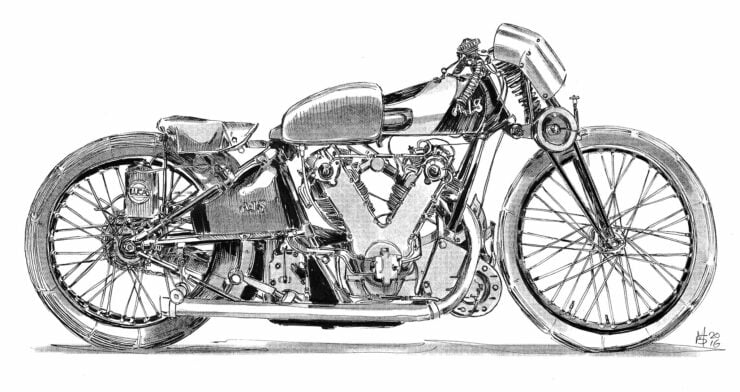 1929 A.J.S. Record Attempt Machine circa 1933. Note the supercharger mounted up front and the streamlining.

During 1931, the V-twin was moved to the London factory after the Collier Brothers took over the AJS marque. It was here that the supercharger was fitted, along with bronze cylinder heads. The blown version was ridden by former record holder Joe Wright at Southport Sands, Lancashire, in May 1933, in front of 20,000 people. The top speed of the day was 136 mph. A few months later, Wright achieved 145 mph in Hungary but in 1932 BMW had already achieved 151.77 mph. AJS was getting closer to the initial target, but the bar was being raised by BMW and so the record attempt machine was retired, deemed uncompetitive for its purpose.

This is the point at which my research gets a bit sparse. I know the AJS V-twin was bought by Chas Mortimar Senior in 1934 from the Plumstead works (Colliers) for the princely sum of £85. In the following year, it was sold to famous record breaker Eric Fernihough. I have seen the odd photo of the machine during the 1930s, possibly at Brooklands. At this time, it was obviously being worked on, to what expected end I don’t know.

Changes were made, I’m assuming to make it competitive. The most notable change is the relocation of the supercharger to above the gearbox. In the supercharger’s original position there were twin magnetos, possibly giving better ignition and tuning. At this time, the machine was also sporting the famous Brooklands fishtail exhausts and so it’s very possible that it was being tested, at least, on the banks of Brooklands, but I know of no official records, as of yet.

After Fernihough’s death at 168mph while attempting the motorcycle land speed record in Gyon, Hungary, 1938 on a Brough Superior, the AJS was sold to E & WH Jowett, an AJS agent in Launceston, Tasmania. In 1940, the AJS was sold on to Reg Munro, a pilot based in England for the duration of the war who became a flying instructor for the area club at Launceston Airport.

Jock Walkem was also a pilot during the war, based in Deniliquin. After his return, Jock started up his own auto electrical business based one street away from E & WH Jowett. According to David ‘Bluey’ Dowd, Jock’s apprentice, Jock was a keen motorcycle racer (c. 1948) and Bluey assumed that Munro ‘must have agreed to let Jock have a long term loan of the V-twin AJS as the first time I saw it Jock and I went to the airport and there it was, leaning against a wall in one of the hangars.

It must have been a goer as Jock said to me do you want to ride it back into town, which I jumped at. I left the aerodrome and away I went with no registration, crash helmet or anything like that. Jock followed in the Javelin but the big bike took off like a rocket leaving Jock far behind until we got into town. I had a big problem with the clutch lever and found it near impossible to pull in.’

1929 A.J.S. Record Attempt Machine circa 1934-39: This is an artist’s impression of what the machine possibly looked like at this time, based on photographs of it before and after this period and one photograph of it at this period from the timing side. If anyone knows of any other photographs take between 1934-39 please get in touch.

In the following years, Jock worked on the AJS and Bluey was fortunate to be involved in this. Jock’s aim was to attempt some speed records. The supercharger was removed as it proved unreliable and ‘two very large Amals were fitted.’ The Supercharger was rumored to be used on a Midget Speedway Car and never seen again.

After Jock’s wife expressed her concerns of the machine being run solo, a non passenger sidecar was constructed. Bluey also got to deal with the troublesome clutch.

The Launceston Motorcycle Club held beach racing meets, a popular sport in the 1950s, as well as circuit racing held at Green’s Beach during low tide the club would run speed runs at Baker’s Beach, which had a long enough stretch for this purpose. This is where Jock rode the AJS with sidecar he managed two runs before the clutch gave out. Bluey reckons the fastest run could have been 113 mph, but wasn’t sure.

The only other account I know of is another quoted by Bluey of another automotive electrician, who worked for Repco, in Launceston. Graham Clifton rode the AJS solo at Baker’s Beach in the 1950s, achieving 123.3 mph winning the Eric Slater Memorial Trophy, which apparently he still has. 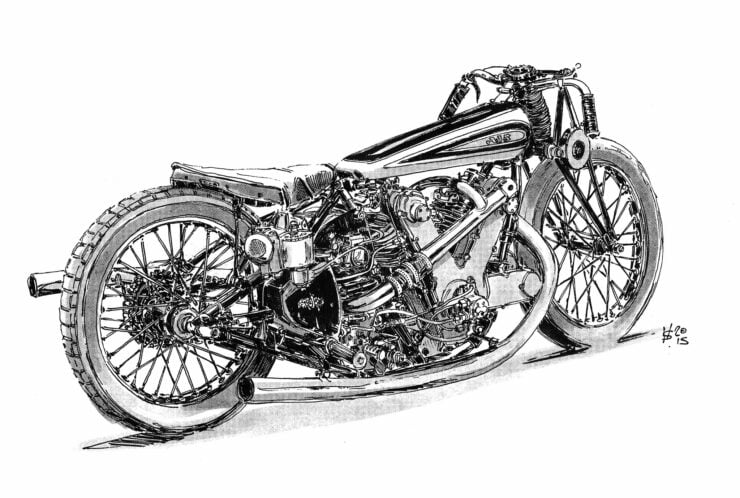 1929 A.J.S. Record Attempt Machine, as sketched at the National Motorcycle Museum in 2015.

The AJS remained in Launceston until 1981 when Revell Munro (Reg’s Son) advertised the machine in the British motorcycle press, asking for bids by a postal auction. The winning bidder was Gerald Batt from Guilford who, after importing the AJS, decided to move it on to Geoffrey St. John.

It is St. John who restored the machine to its current condition, as far as I know. The restoration is an interesting one as it has reinstated some of the changes made post 1934, such as the supercharger above the gearbox, while the aesthetics of the tank and the exhausts are in line with photographs circa 1930.

At this time, I don’t have any information on the restoration, but I’d like to know how it went and the decisions made. It has been noted that during the restoration Geoffrey thought that the machine never achieved its true potential due to the venting in the petrol tank causing fuel starvation.

Geoffrey later sold the AJS to Vic Norman, known for running the Utterly Butterly aerobatic stunt team. The history as far as I’ve found ends there, other than it now resides in the National Motorcycle Museum, and so the story goes full cycle.

As great as it is to be able to see machines like this on display at the museum, I’d love to see it running. Maybe not to achieve its intended goal of 150mph (though that would be incredible!) but to see and hear a machine of such calibre would be such a joy and education for all who could potentially witness it. 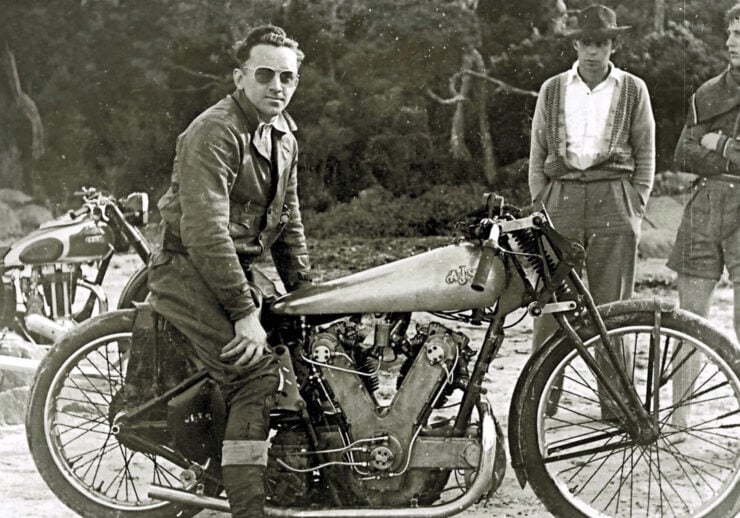 References used in this article:

Martin Squires has an obsession with motor powered transport. A major part of his practise is sketching at motoring events.

The results of a days or weekends sketching are used to inform further research and writing on the history of motorcycles. Regular articles are published in ‘The Classic Motorcycle’ magazine and Hargerty.com

This obsession started through a family connection with Morgan Three Wheelers and various British Motorcycles.

Combining this obsession with a natural talent for sketching and painting Martin has developed a distinctive style which has evolved through a combination of reportage sketching and studio work.