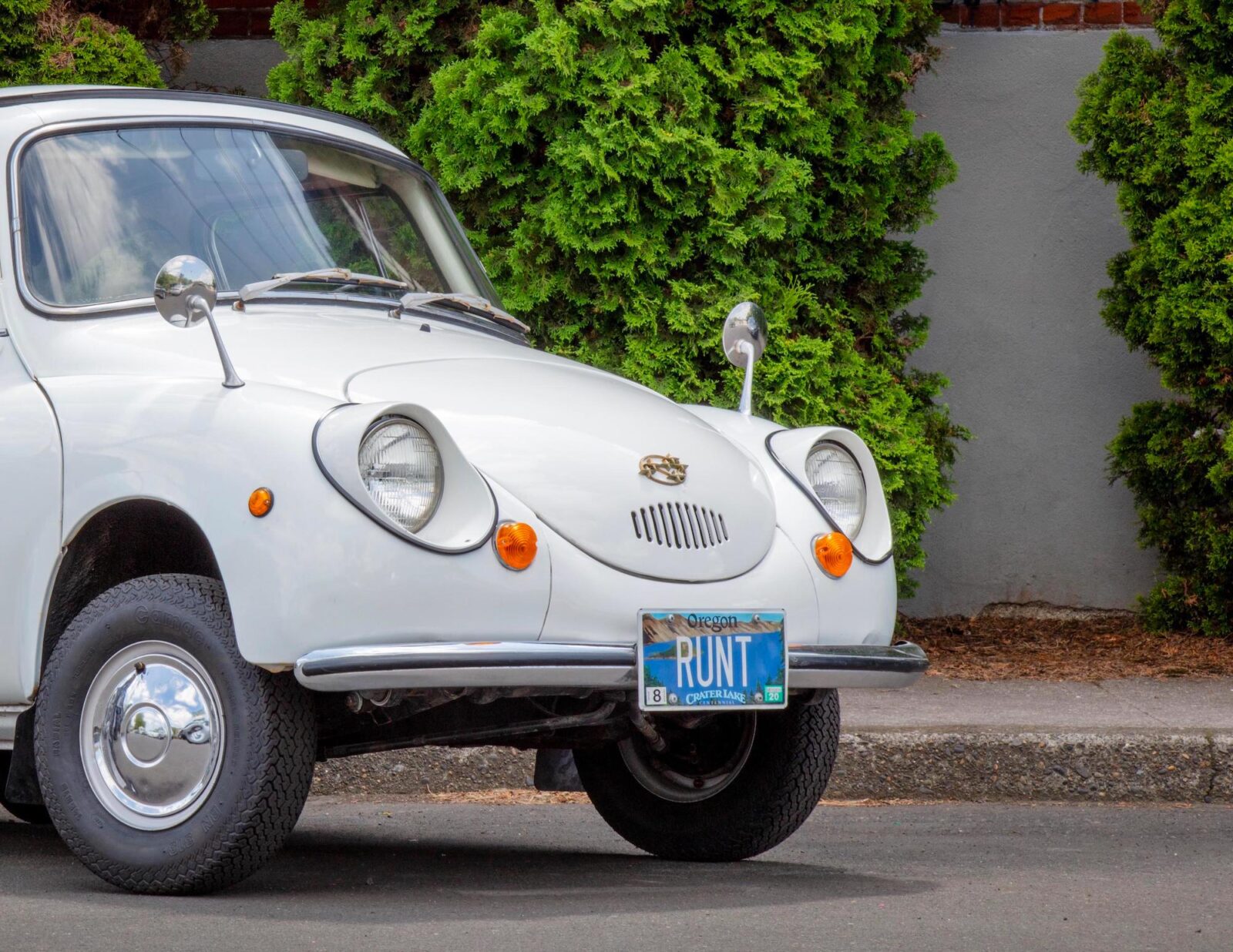 While today we often think of Subarus as being either championship winning rally cars or tough all-wheel drive station wagons, the first car ever imported into the USA by the Japanese marque was the vehicle pictured here, the little Subaru 360.

First introduced in 1958, the Subaru 360 was likely based on similarly affordable European cars, particularly the Fiat 500 and the Volkswagen Beetle. In fact if you combined the styling of the 500 and the Beetle into a single vehicle, it would look an awful lot like the 360.

Subaru can trace its history all the way back to the Japanese Aircraft Research Laboratory in 1915 which later became the Nakajima Aircraft Company, a major supplier of aircraft to the Japanese armed forces during WWII.

In the rebuilding phase after the war the company began building motor scooters before diversifying into automobiles, taking inspiration from the simple, affordable cars being built in Europe. 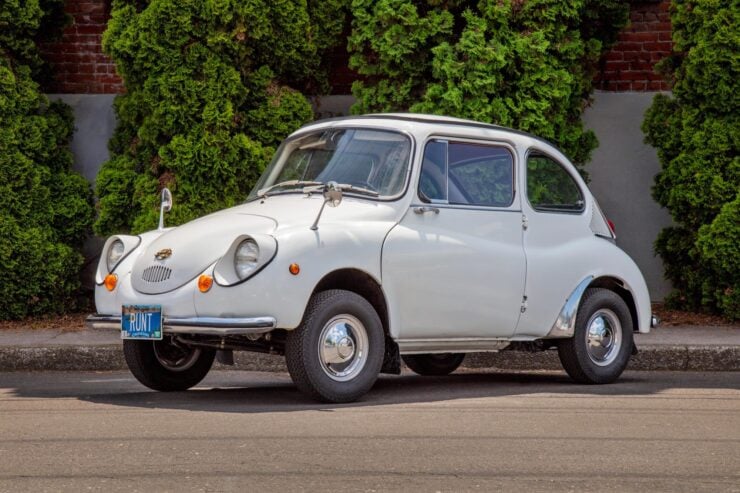 The designers of the Subaru 360 took ample inspiration from cars like the Fiat 500 and the Volkswagen Beetle.

The Subaru 360 was designed to comply with Japan’s Kei car regulations which were designed to encourage the production of small, efficient, affordable cars for the general population. As a result the car is powered by a small air-cooled, two-stroke, parallel twin 356cc engine and it weighs in at less than 1,000 lbs, just 410 kgs or 900 lbs.

For a nation like Japan with its smaller streets and (oftentimes) shorter commuting distances the car was ideal and it sold in significant numbers. It would be upgraded over the course of its production run, early cars made just 16 hp however this was later upgraded to 25 hp and finally to 36 hp thanks to an engine capacity increase and the addition of twin carburetors.

A number of special variants of the 360 were built for commercial use, there was the Sambar which could be ordered as either a truck or a van as well as the closely related Subaru 450 which was used for export markets.

Subaru also made a convertible version with a removable fabric roof section, and a station wagon. Sporting variants were also produced, the Subaru Young S and the related Young SS which had engine and transmission upgrades, racing stripes, bucket seats, and other additions to appeal to those who wanted to go a little faster.

The Subaru 360 would be offered for sale in the United States by larger-than-life character Malcolm Bricklin, he imported approximately 10,000 of them and advertised them as “Cheap and Ugly” (see the original ad below this article).

Consumer Reports And The End Of The 360

They sold reasonably well until a critical Consumer Reports report highlighted the dangers of the car when used in the United States – the rear-hinged doors were known to swing open if not latched properly and the little car was no match for hefty American iron in the crash safety stakes – when involved in an accident with an American car the Subaru 360 could be crushed down to less than half its size.

Above Image: These are some of the original TV ads for the Subaru 360 when it was first released in the USA.

This report led to sales of the car all but stopping overnight. Malcolm Bricklin picked himself up, dusted himself off, and started his own ill-fated car company building and selling the Bricklin SV-1.

Subaru would similarly dust itself off after the Consumer Reports fiasco and it would later make a name for itself in the USA selling tough all-wheel drive vehicles like the Subaru BRAT. It’s now one of the most highly regarded automakers in the US market.

The car you see here is a later Subaru 360 Deluxe model, it’s powered by a later version of the 356cc two-stroke, two-cylinder engine producing 36 bhp and sending power to the rear wheels via a 3-speed manual transmission.

The Deluxe is historically notable as it was the only model exported to the United States, and it features special brightwork and chromed wheels to appeal to American buyers.

This 360 was acquired by its current owner in 2020 who lavished $10,000 on refurbishments, the car is now described as being in largely in its original white paint with red vinyl interior, with under 15,000 miles on the odometer.

It’s now due to roll across the auction block with Bonhams on the 13th of August with a price guide of $30,000 – $50,000 USD. If you’d like to read more about it or register to bid you can click here to visit the listing. 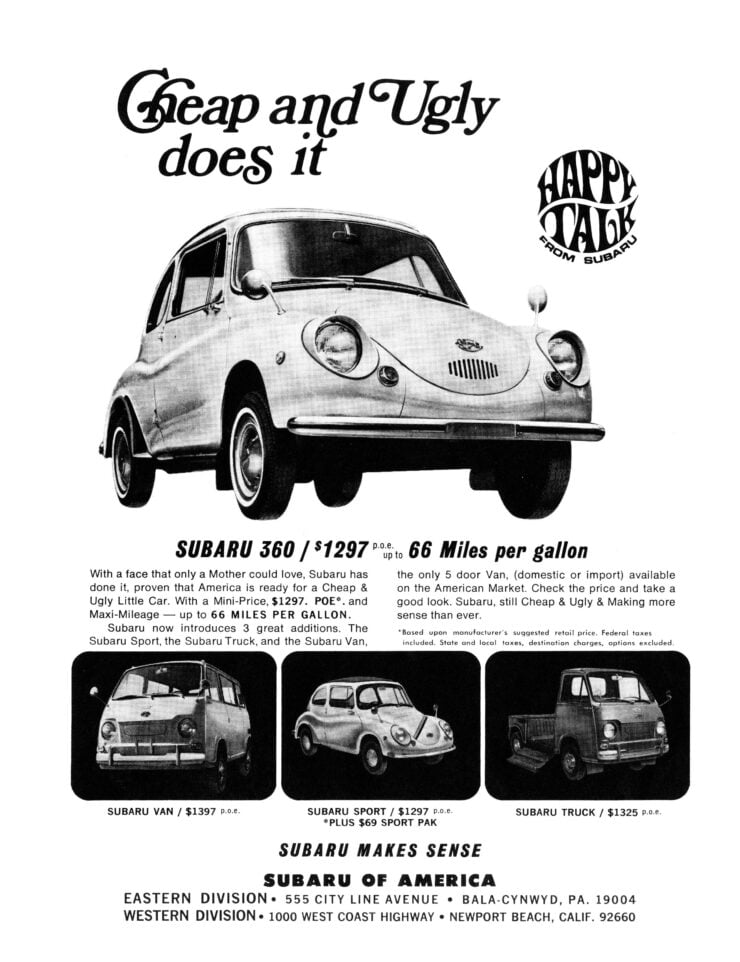 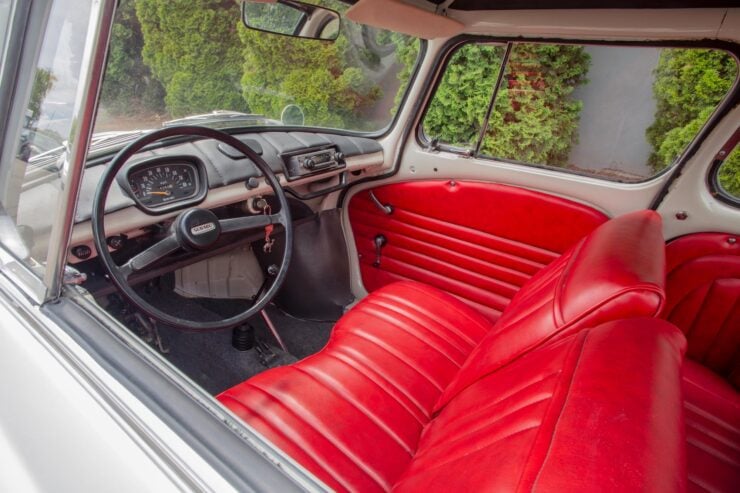 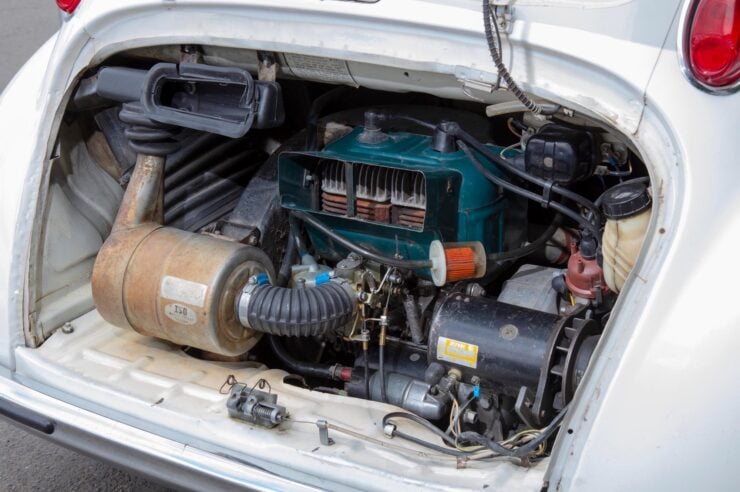 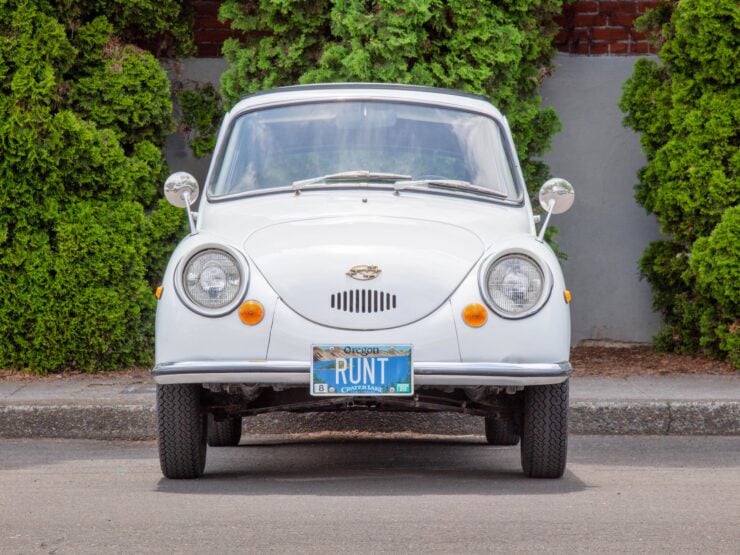 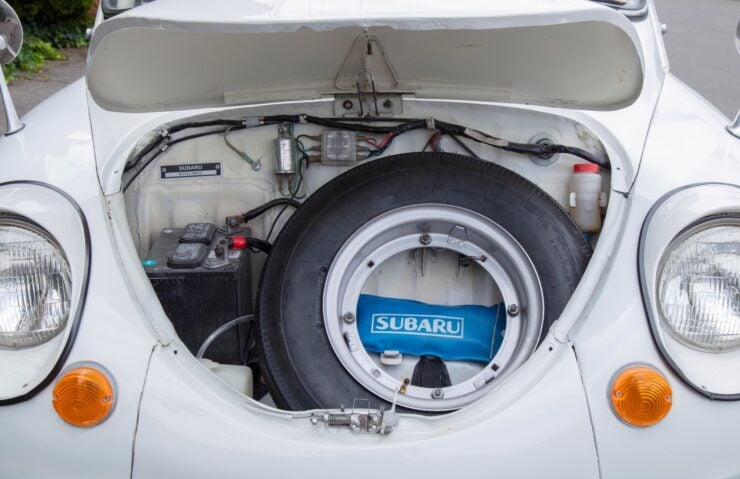 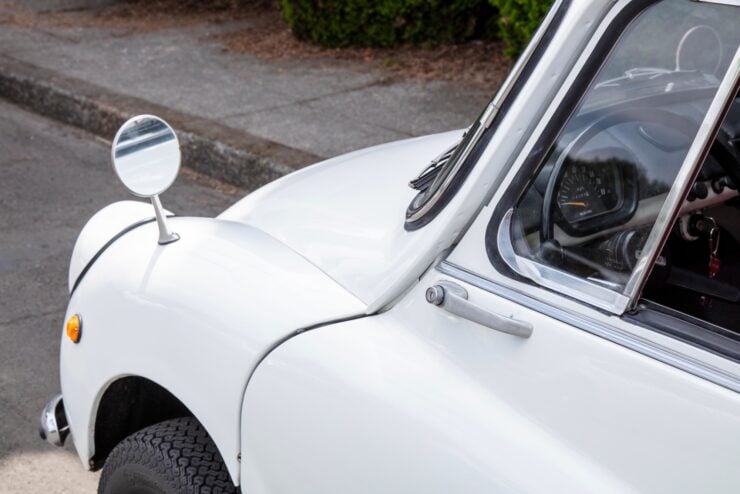 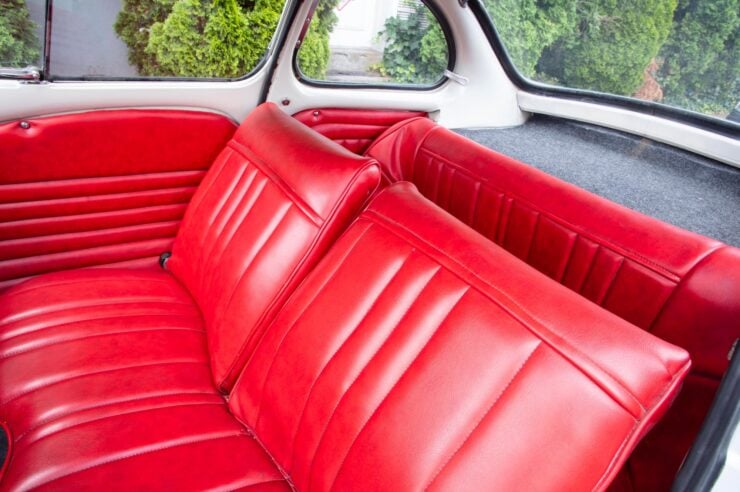 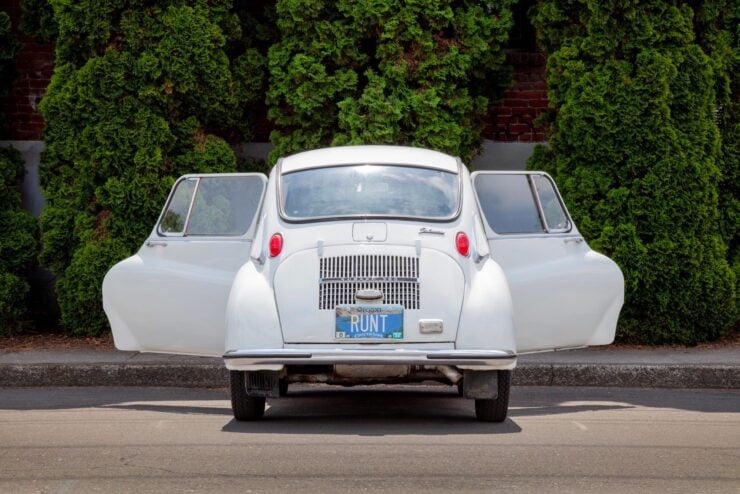 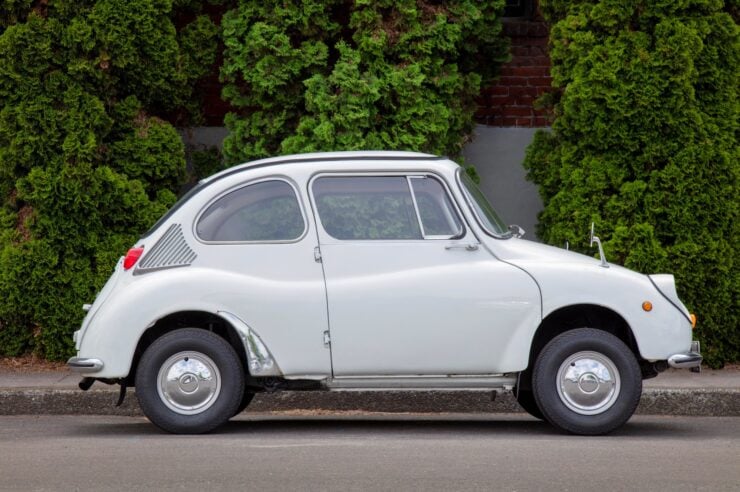 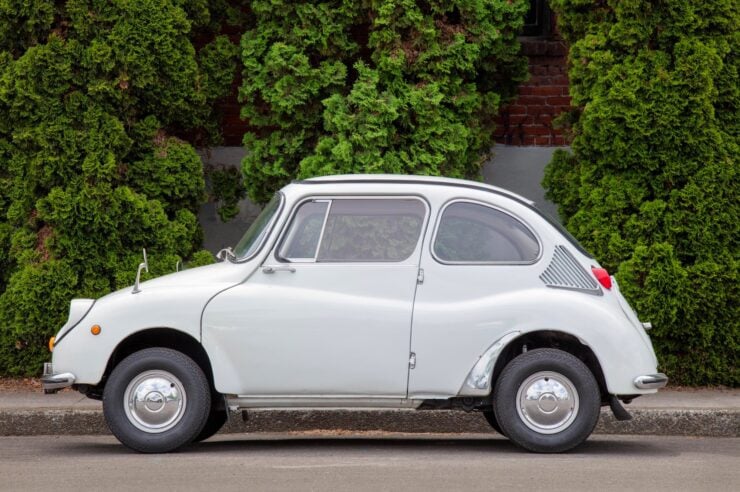 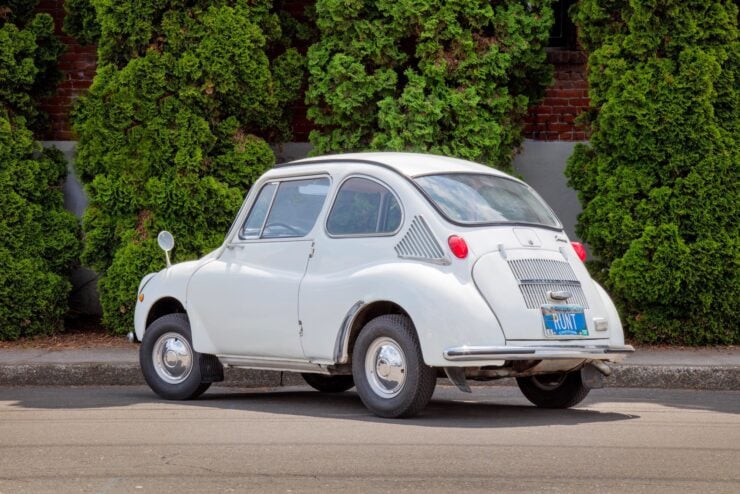 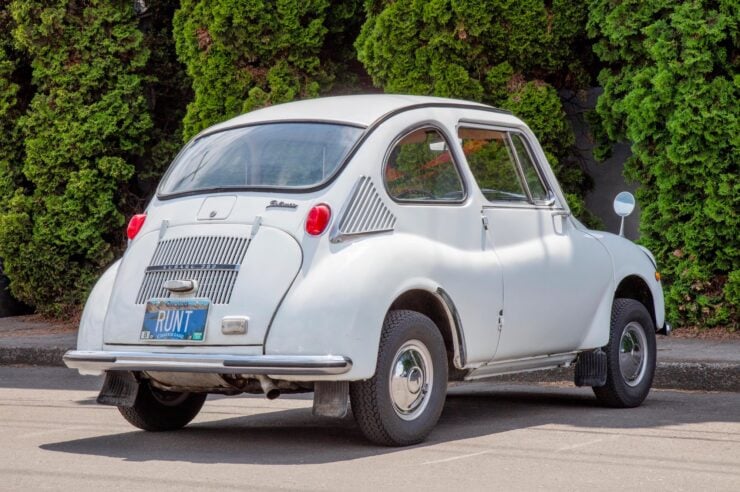 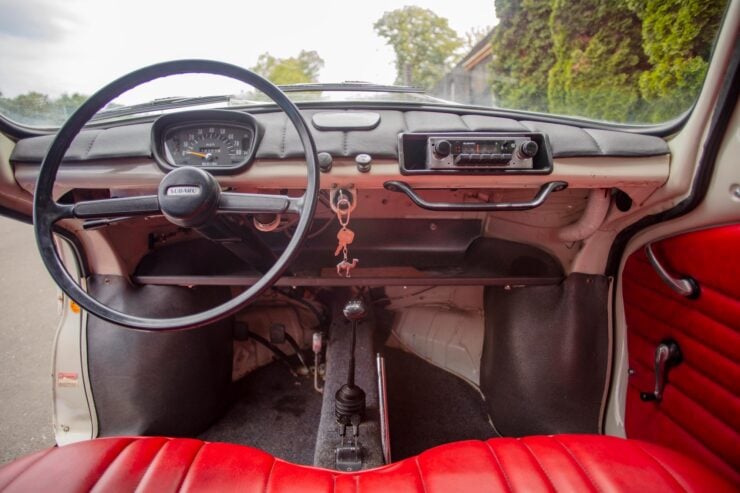 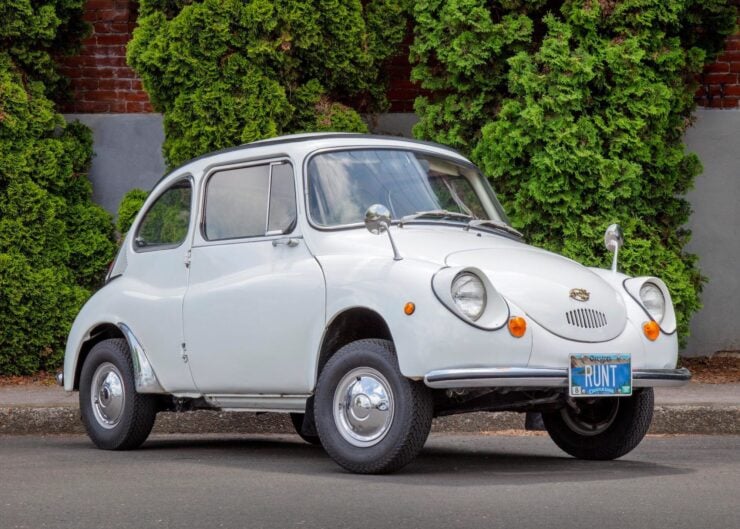