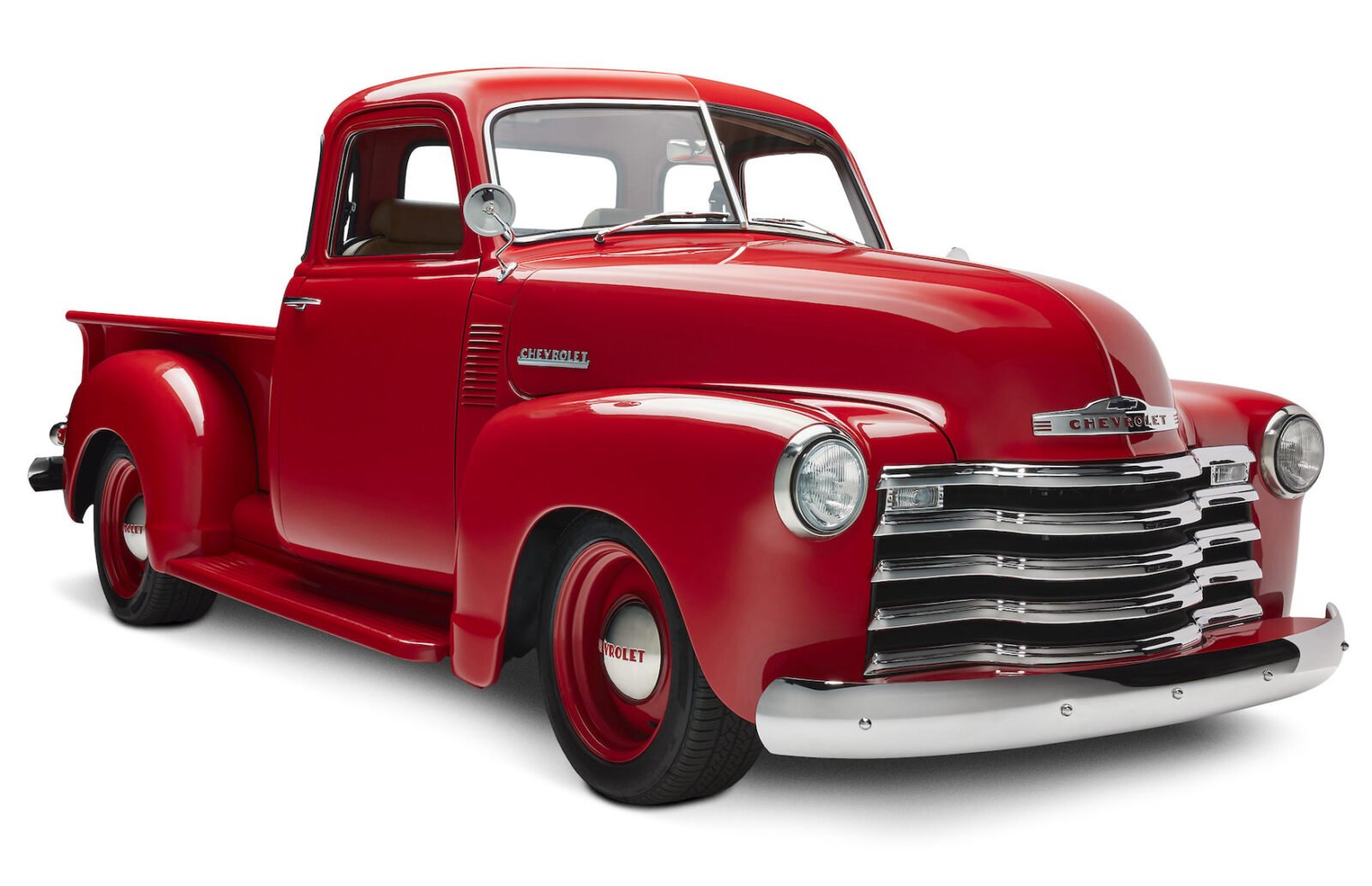 This is the 100% electric Kindred 3100, it’s a new electric pickup truck slated to begin low-volume production in 2024, and pre-order slots are now available.

Each Kindred 3100 is based on a fully restored Chevrolet 3100 pickup truck, the original drivetrain has been removed and replaced with a 74 kWh battery pack and a 294 hp direct drive electric AC motor powering the rear wheels – giving the truck a range of 200 miles or 322 kilometers.

Kindred Motorworks was founded by Rob Howard with the express purpose of modernizing classic cars and keeping them on the road – with 100% electric drivetrains that make them future-proof and immune to unpredictable gasoline prices. 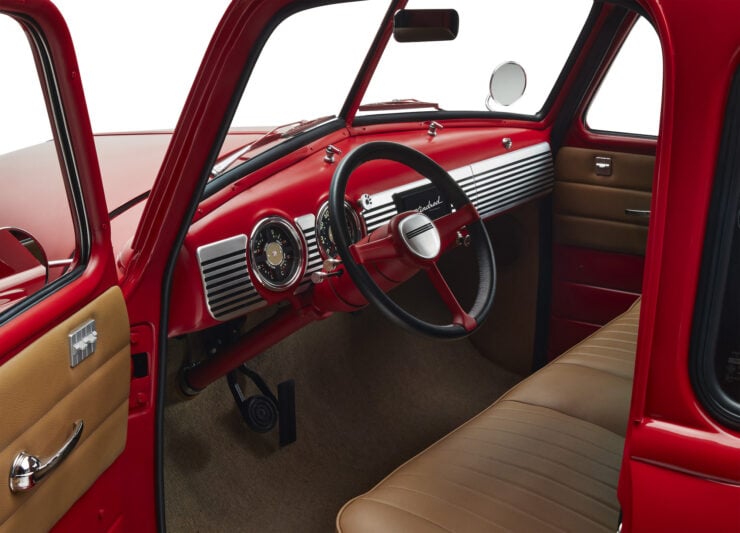 The team at Kindred Motorworks were careful to keep the interior looking close to the original, though it has a slew of modern upgrades like power windows, a touch screen media center, and air conditioning.

The company has a design center in Marin County, California and a production facility in Mare Island, California. They currently have three electrified classic cars in low-volume production, including the Kindred VW Bus, the Kindred Bronco, and the Kindred Camaro – with the new Kindred 3100 pickup truck due to join their ranks in 2024.

Restomods and electric conversions will always be somewhat controversial, however Kindred mitigates this to a large degree by only using mass-produced classic vehicles as their starting points – not ultra-rare vehicles that are irreplaceable.

The Kindred 3100 is an electric pickup truck based on the popular Chevrolet 3100 pickup trucks that were manufactured between 1947 and 1955 as part of the Chevrolet Advance Design series.

The Chevrolet Advance Design series trucks were best-sellers in North America and their design was a major influence on other manufacturers. Today they remain popular with collectors and restomodders, as the quintessential 1950s-era American pickup truck. 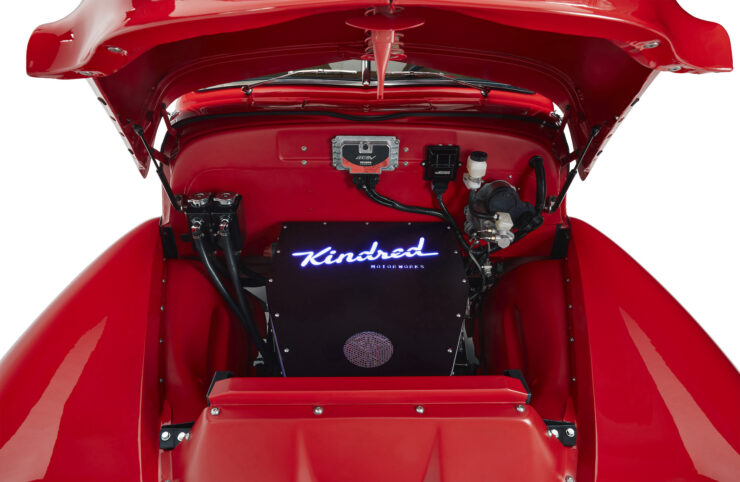 In place of the original drivetrain the truck is now fitted with a 74 kWh battery pack and a 294 hp direct drive electric AC motor powering the rear wheels.

The team at Kindred Motorworks chose the Chevrolet 3100 as the starting point for what is the company’s first foray into the world of electric pickup truck production. Each truck has its drivetrain removed and the body and chassis is then completely restored.

Once this process is complete the electric drivetrain is fitted. It consists of a 74 kWh battery pack that is made specifically for Kindred by KORE Power, and a 294 hp direct drive electric AC motor that drives the rear wheels, giving the truck a range of approximately 200 miles or 322 kilometers.

The interior of the truck features a leather bench seat that can accommodate three, or two with the central section folded down to provide cupholders and a storage bin. The dashboard looks largely original except for the centrally-mounted touchscreen media center, it’s actually all new with new (period correct looking) EV gauges, and various controls for the vehicle.

The Kindred 3100 has modern air-conditioning and heating built in, and thanks to its battery pack it also has both USB and standard power outlets. Four wheel power disc brakes are installed, as is electric power steering, and an electric parking brake. 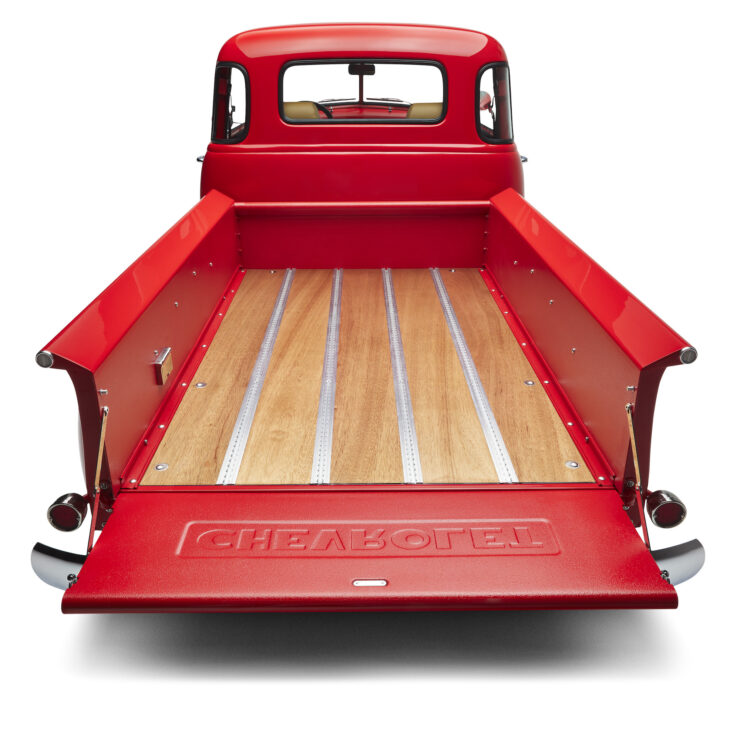 The Kindred 3100 is designed to actually be used as a pickup truck when needed, it has marine-grade waterproof flooring, modular tie-downs, a push-button tailgate, and power outlets in the rear for operating or recharging power tools.

The team at Kindred have respected the pickup truck heritage of the Chevrolet 3100, the rear cargo bed has marine-grade waterproof flooring, modular tie-downs, and a push-button tailgate so it can be used as originally intended.

In order to make the truck as real-world usable as possible it comes with a 6.6 kW onboard charger that supports both 120v and 240v charging, and they can be charged at thousands of electric vehicle charging stations across the United States including Chargepoint and Electrify America.

The starting MSRP of $159,000 USD won’t be for everyone of course, but there is already an orderly queue forming with refundable deposits of $1,000 USD being taken to get a place in the line. If you’d like to read more or enquire about buying one of your own you can visit Kindred Motorworks here. 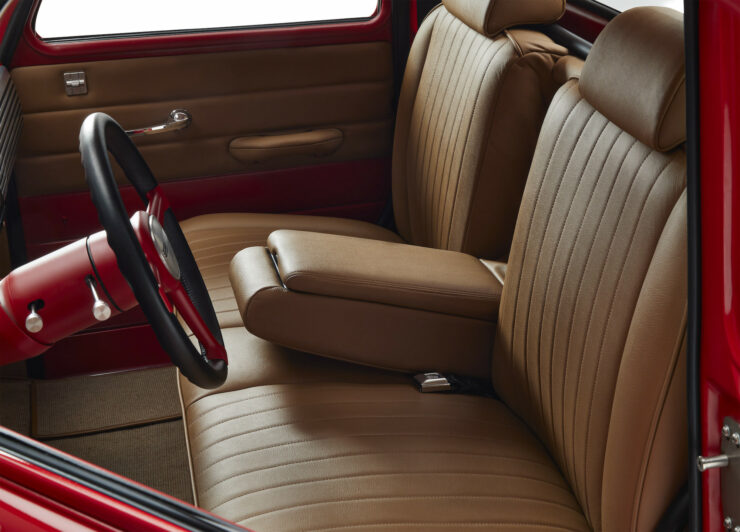 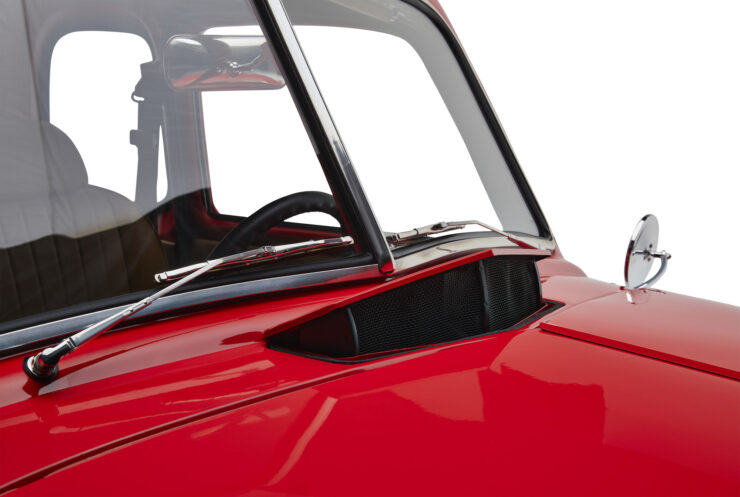 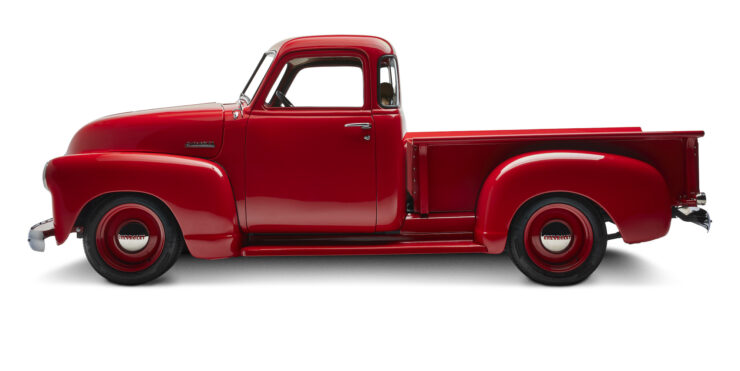 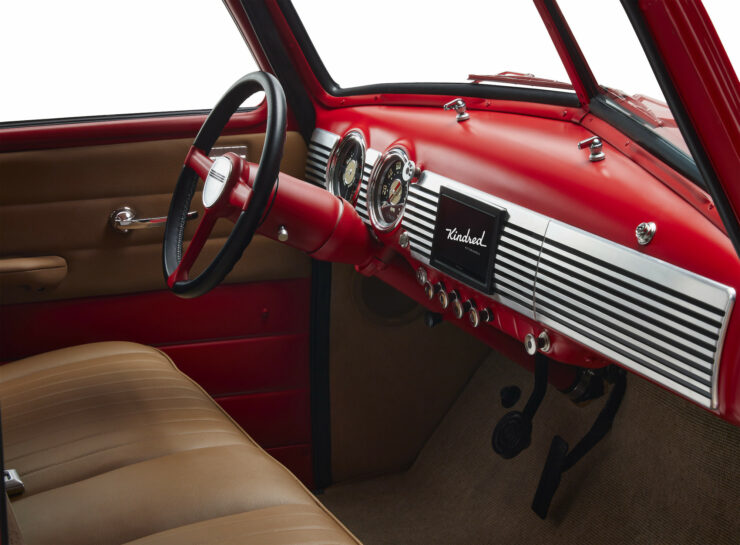 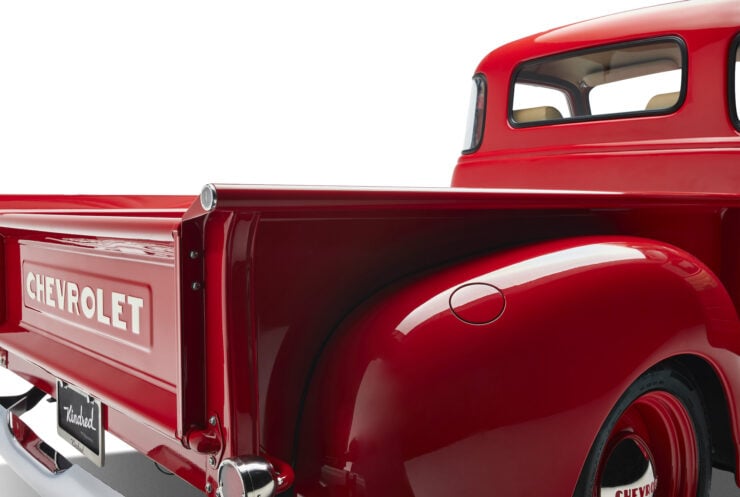 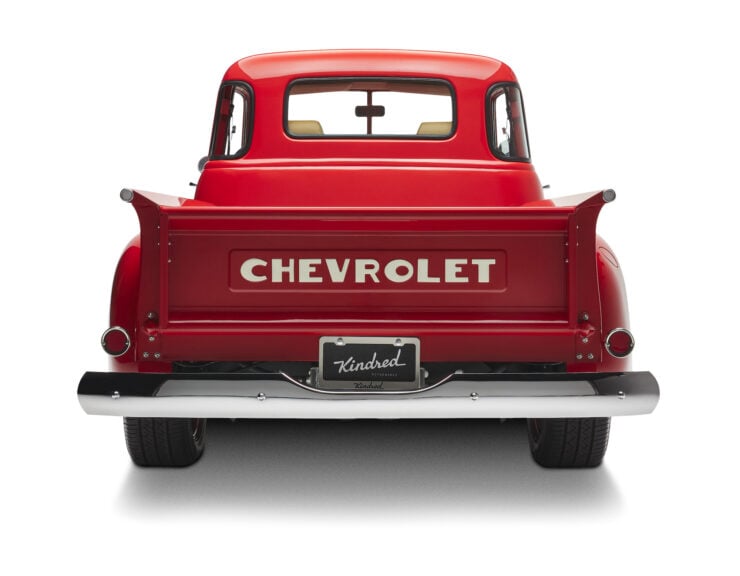 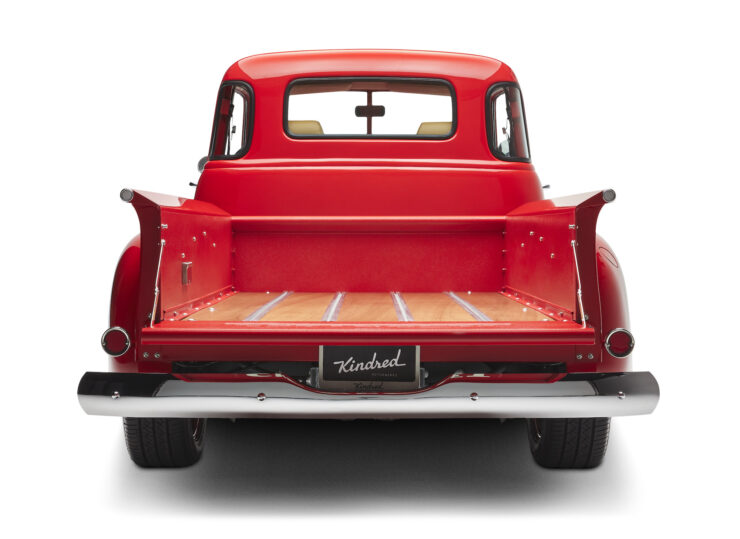 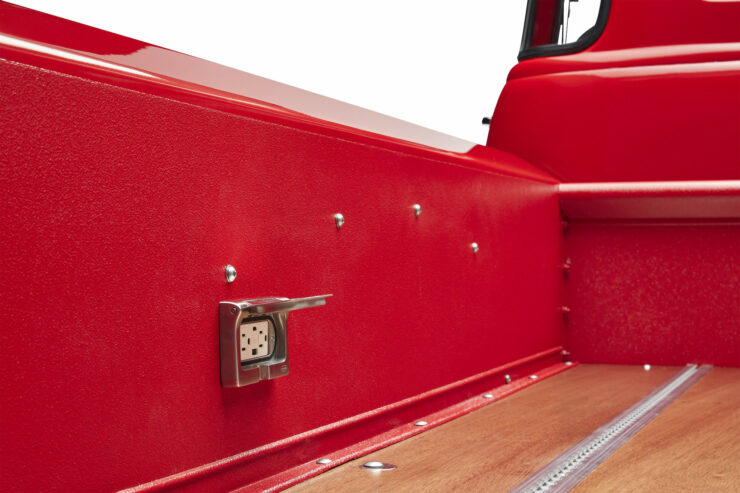 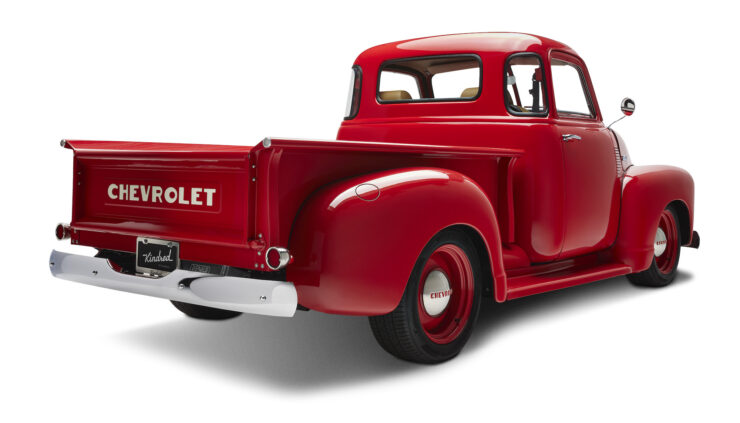 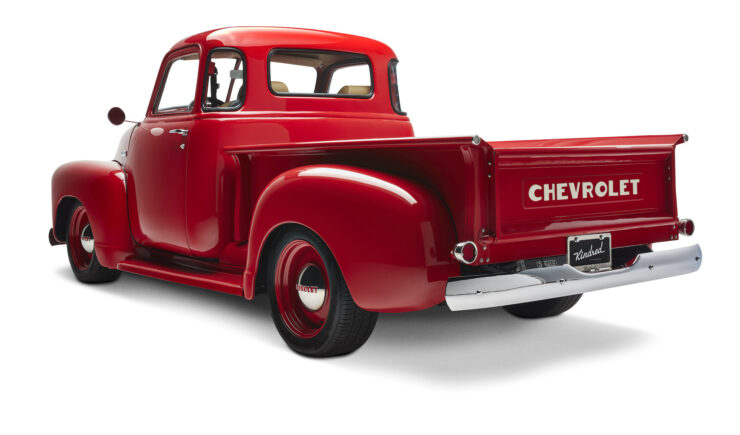 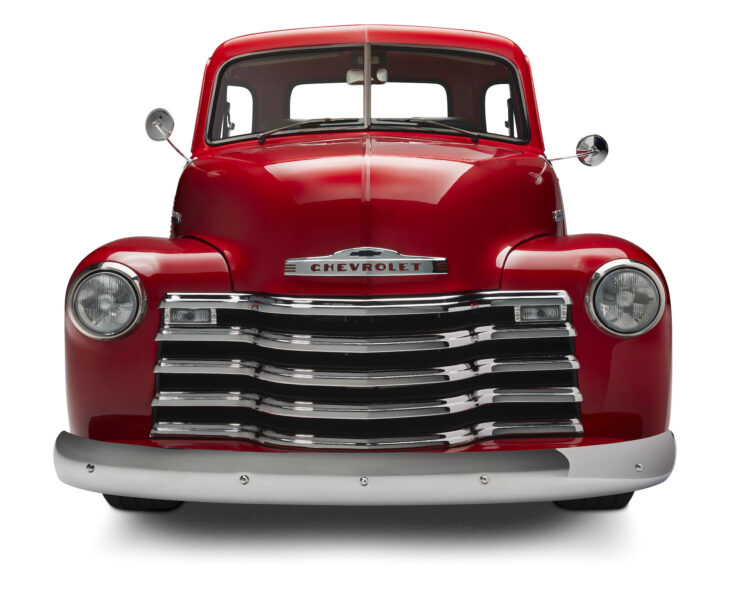 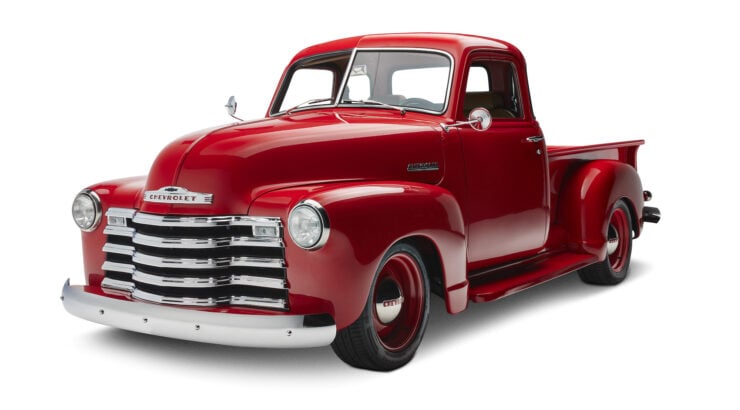