The AMC Eagle SX/4 was a car decades ahead of its time, it offered a sports car body with increased ground clearance and a four-wheel drive powertrain, creating an entirely new automotive genre overnight.

The larger but closely related AMC Eagle had been released in 1979, it’s widely regarded as the first American “Crossover” vehicle that combined road car comfort and handling with a four-wheel drive system and increased ground clearance for the occasional off-road excursion.

The Sports Car That Doesn’t Always Need A Road

Period reviews for the AMC Eagle SX/4 were overwhelmingly positive, albeit often a little bemused by the unusual nature of this new sports car with higher ground clearance and a four-wheel drive system. The usefulness of such a vehicle was undeniable – particularly for those who live through long snowy, icy winters.

Above Image: This is a period advertisement for the AMC Eagle SX/4, these cars became popular in northern latitudes with regular heavy snowfalls, as the four-wheel drive system made them much easier to handle in slippery conditions.

Magazine reviews from the likes of Popular Mechanics and Car and Driver lauded the capabilities of the quirky new crossover, with the Popular Mechanics review coinciding with a particularly snowy Detroit winter.

AMC had hired the company behind the Jensen FF who had developed an all-wheel drive system designed for passenger cars, “FF” stands for “Ferguson Formula,” the name chosen for the system by Ferguson Research Ltd.

The Eagle SX/4 had been created by taking the AMC Spirit, a fastback unibody sports car coupe, and adding a variant of the four-wheel drive system used on the full-size AMC Eagle, which had been co-developed by AMC and Ferguson Research.

The AMC Eagle predated the SX/4 by two years, and it had been developed by taking the AMC Concord, offered in station wagon, coupe, and four-door sedan versions, and adding elevated suspension and a four-wheel drive powertrain. 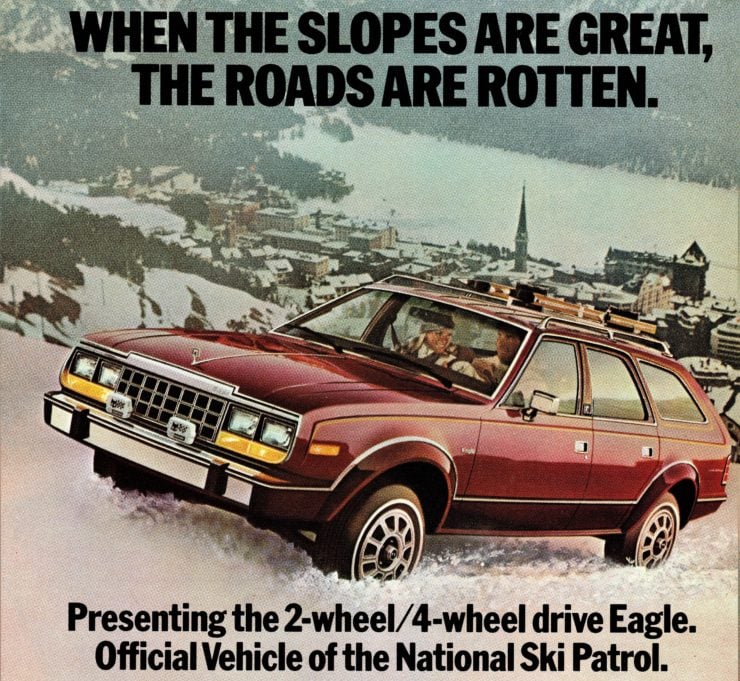 This is a period ad for the AMC Eagle, the larger 4×4 four-door station wagon in the model line that used the body from the AMC Concord.

On its release in 1981, AMC billed the Eagle SX/4 as “The Sports Car That Doesn’t Always Need A Road,” and while this may have been leaning a little towards hyperbole it does clearly demonstrate their intentions for the model.

The End Of AMC

Ultimately the innovative Eagle and Eagle SX/4 wouldn’t be enough to save AMC, the company suffered serious financial losses in the mid-1980s and it was eventually sold out to Chrysler in 1987.

Chrysler were mainly interested in the Jeep brand that was owned by AMC, as well as their factories and expansive nationwide dealership network.

The AMX Eagle and SX/4 would remain in production until 1988 when they were axed by Chrysler. Today the cars are looked back on has historically important given their innovative nature, but they haven’t yet become collectors items outside of their own niche enthusiast group. 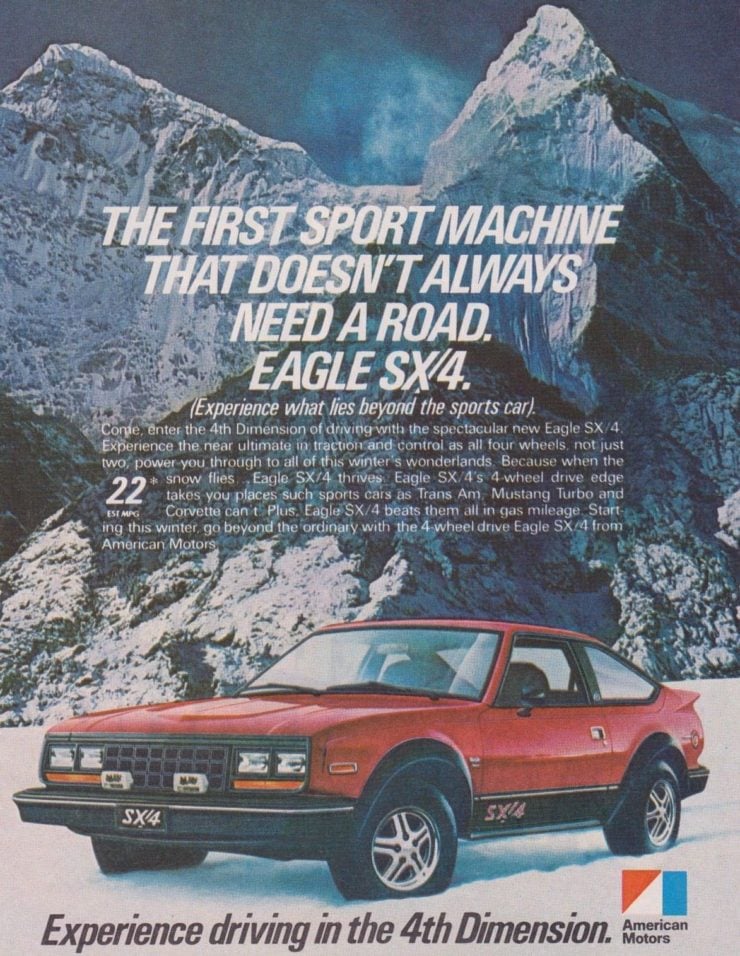 This is an original ad for the AMC Eagle SX/4, the smaller 4×4 sports car coupe that was based on the AMC Spirit body.

The car you see here is a one-owner, six-cylinder 1982 AMC Eagle SX/4 that is said to have been sitting unused since 1995.

The seller spent some time getting the car back into running and driving condition, the car is now operational and the 2×4/4×4 switch is working, however it’s clear that plenty more work needs to be done to get the car back into proper road worthy condition.

There is a highly active AMC Eagle community online that specializes in sourcing parts and helping to keep the cars on the road, and given the unique nature of the cars it seems only a matter of time before the wider classic car community rediscovers them

If you’d like to take the project on you can click here to visit the eBay listing, it’s being offered out of Hatboro, Pennsylvania and at the time of writing there are a few days left to bid. 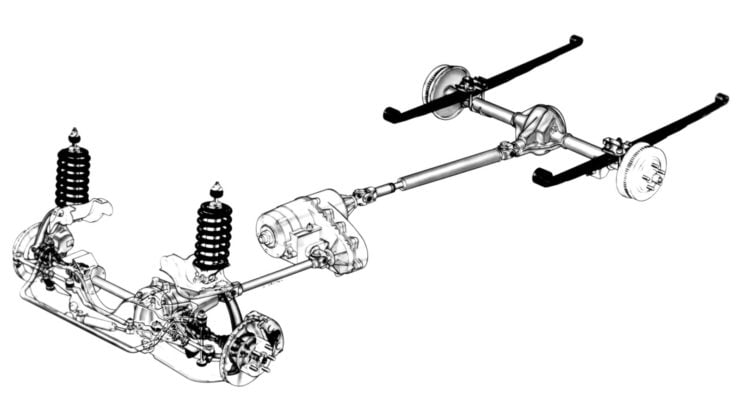 This is the drivetrain of the AMC Eagle and Eagle SX/4 cars, it utilizes a live axle rear on leaf springs, with independent suspension on coil springs up front. 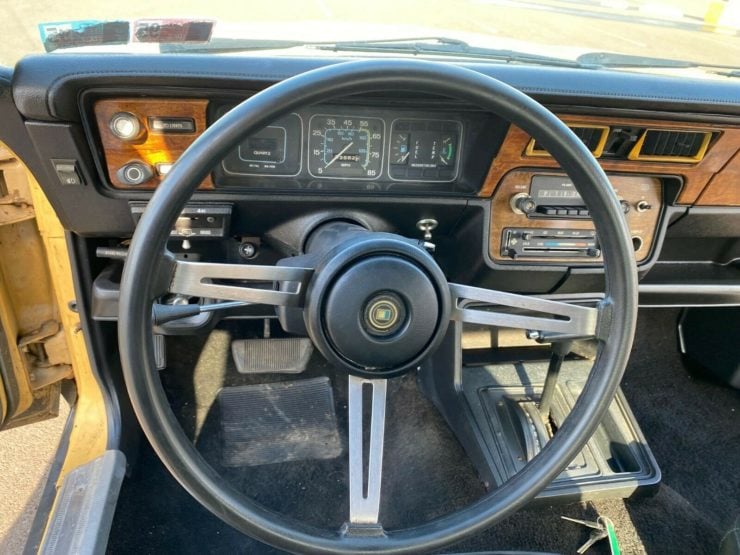 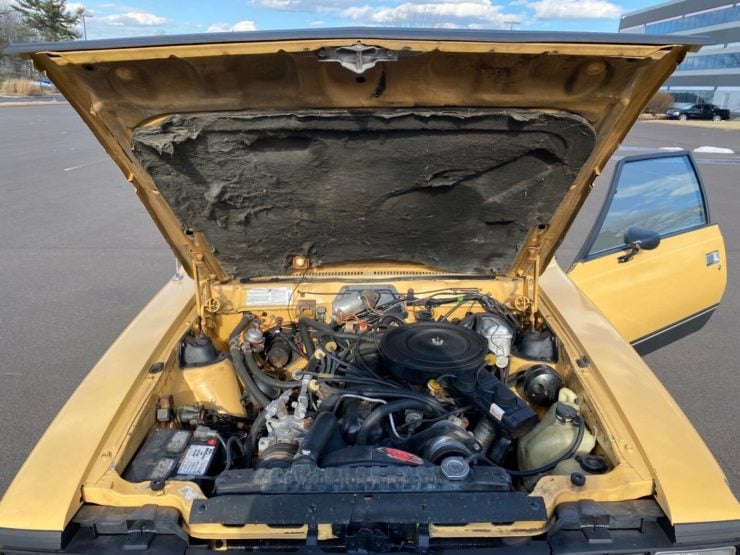 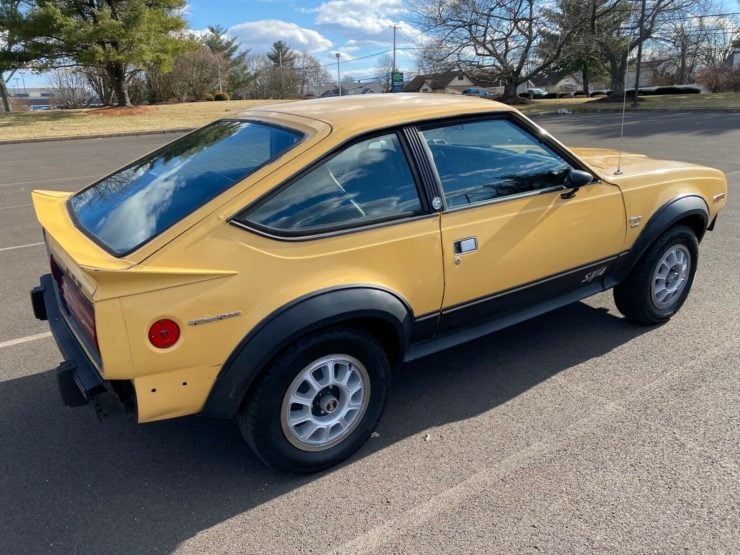 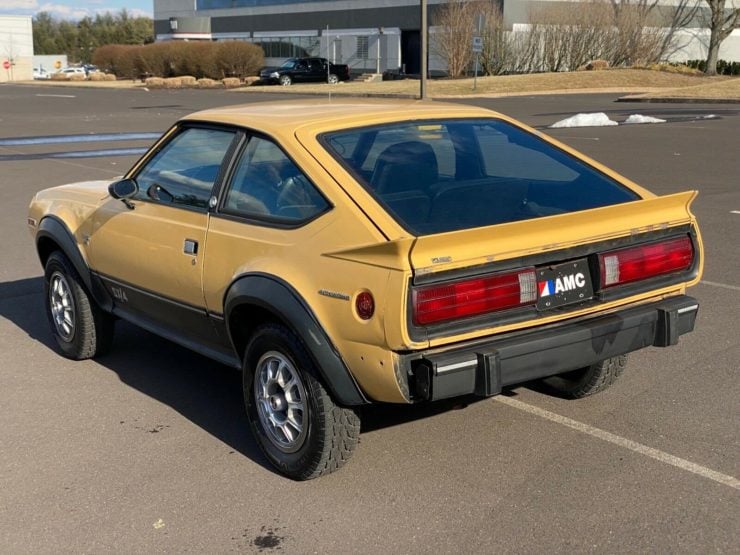 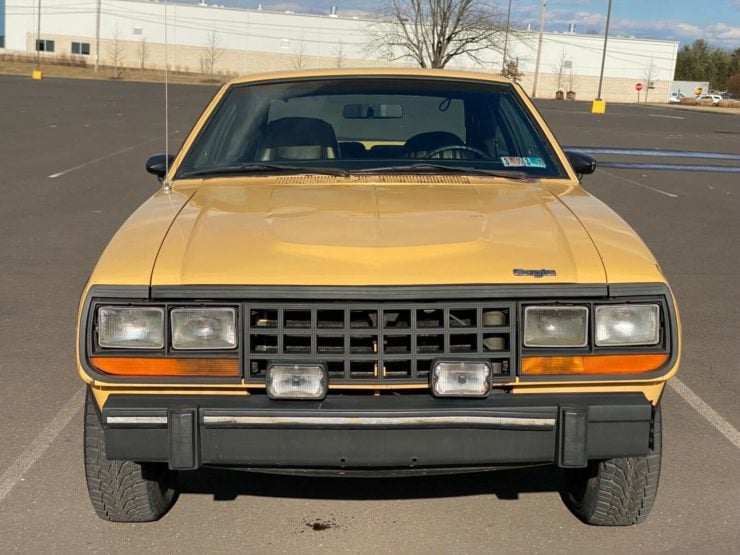 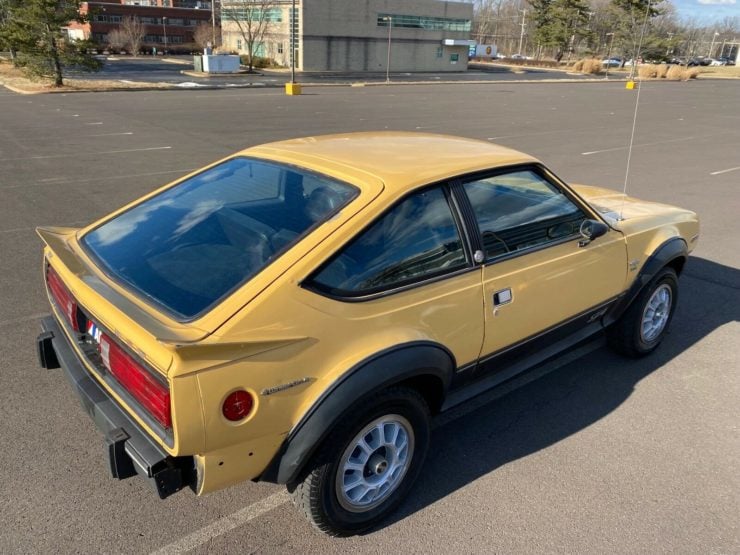 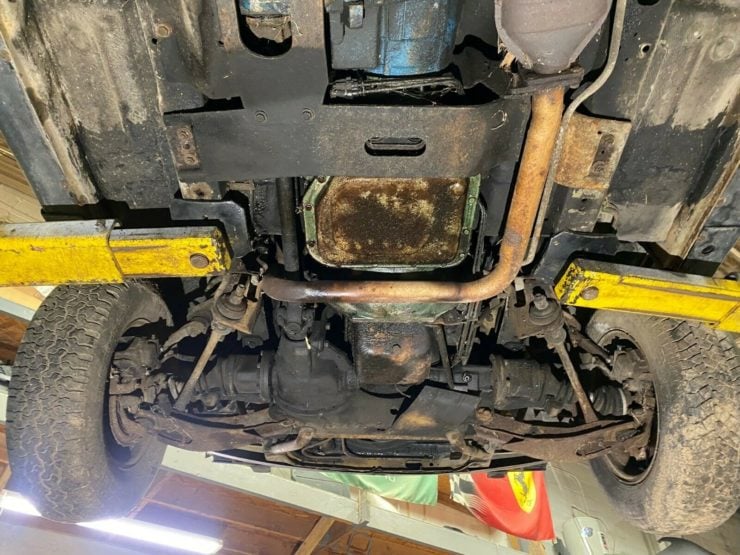 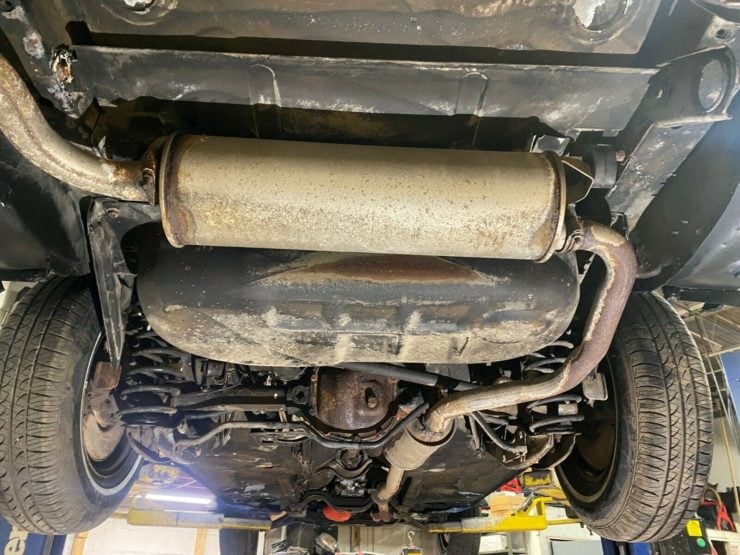 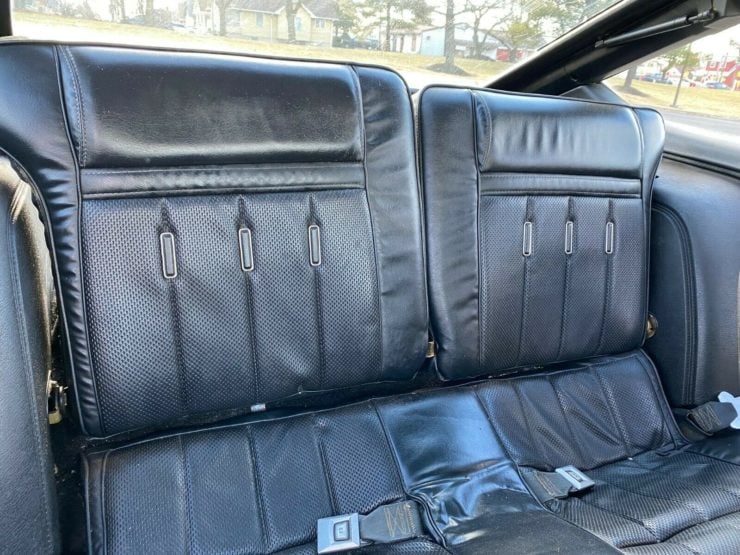