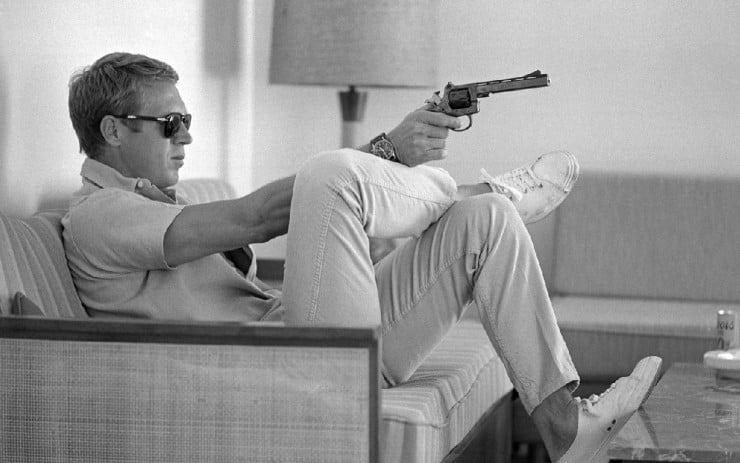 This classic old photograph of Steve McQueen almost has shades of Hunter S. Thompson about it, if you’d like to see the fully sized version just click the picture, then click it again.

The Flint and Tinder Sherpa-Lined Waxed Ridge Parka was developed to be your primary winter coat. It has a main chassis of high quality British Millerain waxed canvas, the gold standard for waxed canvas, which keeps out the wind, rain, snow, and sleet. The jacket has a full insulating sherpa lining to keep the heat…

D3O (pronounced “dee three oh”) is a modern viscoelastic body armor used by the armed forces, world class athletes, motorcyclists, snowboarders, and many others who need to protect themselves from impact injury whilst still remaining as flexible as possible. Long story short, D3O is soft to the touch, squidgy is probably the best word, but…

Neon White Rose Gasoline signs could be seen on highways and byways coast to coast in the early to mid-20th century. The White Rose trademark belonged to The National Refining Company located in Cleveland, Ohio. The company had started out refining kerosene which had been widely used for lighting homes before the invention of the…

This film shows the first Corvettes being built in 1953, just 300 were painstakingly made by hand that year as Chevrolet ramped up for larger production figures in 1954. All 1953 Corvettes were Polo White with a red interior, they were fitted with a 235 cu. in. (3.9 litre) Blue Flame inline six cylinder engine,…

The Glasspar G2 is considered by many automotive historians to be the first production car with a fibreglass body, it was a major contributing factor behind the surge in popularity of fibreglass-bodied vehicles in the United States in the 1950s and beyond – resulting in iconic cars like the Chevrolet Corvette, the Meyers Manx, and the…

The 1985 Daytona 200 was a significant race in the career of “Fast” Freddie Spencer, he pulled out a lead early in the race before a mystery engine problem forced him into the pits and out of the race – or so many thought. The engine problem proved to be a gremlin that would disappear…