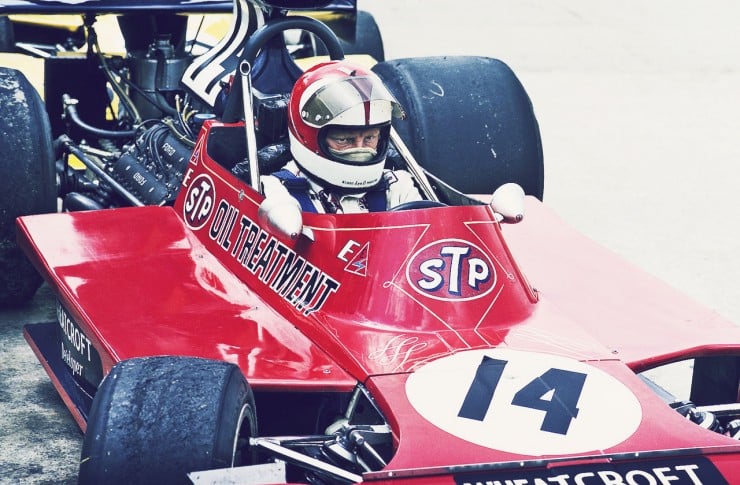 Roger Williamson is a name unknown to many modern Formula 1 fans, had it not been for a disastrous day on the 29th of July 1973 he would almost certainly have gone on to become one of the best known F1 drivers of the 1970s and many think, a world champion.

1973 was Williamson’s first year as an F1 driver, he had come into the sport via British Formula 3 where he had won both the 1971 and 1972 championships. He rested for the BRM team but was advised not to take the drive and instead took a race seat with the STP March Racing Team. On his second outing in the Ford Cosworth powered car he suffered a catastrophic tire failure that left his car flipped upside down and on fire by the side of the circuit.

The driver behind Williamson was David Purley, he saw the accident and pulled his car in next to the burning wreck to try to save him. He managed to single handedly rolled the burning car back onto its wheels, then ran to the opposite side of the track to get a fire extinguisher, which he emptied into the BRM’s cockpit.

Purley couldn’t get Williamson out of the car on his own and was wildy gesticulating for help from trackside marshals, other drivers and spectators. No one came to his aid however and by the time Williamson was removed from the car he had died from smoke inhalation.

The tragic events surrounding the death of one of the sports most promising new drivers led to a major shake-up for the training regimen undertaken by both marshals and trackside medical personel. You’ll notice that during Formula 1 races today, marshals are on the scene of an accident within seconds.

In 2003 a bronze statue of Roger Williamson was unveiled at the Donington Park Circuit in Leicestershire, the English county where he grew up and started his racing career.

Introduction The Austin-Healey Sprite’s most famous and perhaps most endearing feature was its uncanny resemblance to Kermit the Frog: and in fact both the car and the puppet were created around the same time with…